Showing posts from June, 2019
Show All

No. 458 - The McCulloch Memorial Church at Gawler 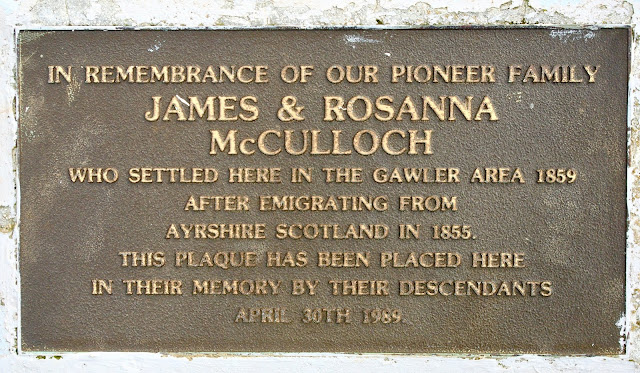 South of Ulverstone, along the Top Gawler Road is the specularly situated and lovingly maintained McCulloch Memorial Cemetery. A memorial plaque at the entrance to the private cemetery remembers James and Rosanna McCulloch, pioneer settlers and their descendants in the Gawler area. In 1939 the old Barrington Presbyterian church (opened in 1893) was removed to the Gawler Road cemetery where it was rededicated as the ‘McCulloch Memorial Church’. Local people, mostly members of the McCulloch family moved the church in sections and reconstructed the building on the new site. Services at the church, also known as the Gawler Road church, were regularly held serving Presbyterians of the Abbotsham and the Upper Gawler area. The church is no longer on the site. There are several newspaper report’s describing the church’s opening and rededication in May 1939, including this one from the Launceston Examiner: “On Sunday the recently removed Barrington Presbyterian Church was rededicated at Gawle
Post a Comment
Read more 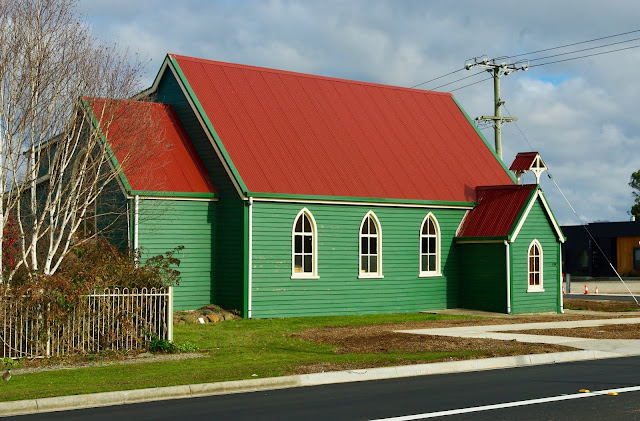 Sheffield is a country town in northern Tasmania approximately 25 kilometres south of Devonport. The area was explored by the surveyor Nathaniel Kentish in 1842 who was trying to find a route from Deloraine through to the north west coast. The area was subsequently opened up to settlement and by 1862 plots of land had been sold and the settlement of Sheffield had been named. According to J R Skemps’ ‘A History of the North West Coast’, in 1861 the first licence for a public house, the Sheffield Inn, was taken out by James Poulett, a native of Sheffield in England, and probably gave the town its name. Sheffield has been well represented by various religious denominations including Presbyterian; Catholic; Anglican; Baptist; Brethren; Methodist and the Salvation Army. This blog entry look at Sheffield’s first Anglican church which was established in 1891 and closed in 1978 when it was replaced by a modern modern building in a different part of the town. The old church still exists an
Post a Comment
Read more

No. 456 - St Paul's at Bengeo - "Assurance of Our Affectionate Regard"

Approximately 7 kilometres west of Deloraine, near Red Hills, lies Bengeo Road, named after a large farm established in the area in the mid 19th century. Originally a 1200 acre land grant made to Colonel Schaw, the property was purchased by John Archer in 1840 and named Bengeo, after his native village in Hertfordshire, England. A church once stood at a site on Coxs Road which once formed part of the Bengeo estate. Little of it now remains apart from stone walls which formed the church’s foundation and the remnants of a graveyard. The church would have been a simple wooden structure which stood at the site from the 1860’s to the 1890’s. It is possible that the building may have been removed to Bengeo farm and may still exist as one of many outbuildings on the property. The church, called St Paul’s, was opened on Sunday 21 April 1861 by Archdeacon Thomas Reibey of Launceston. Very little information about the church exists although newspaper reports made regular reference to harvest
Post a Comment
Read more 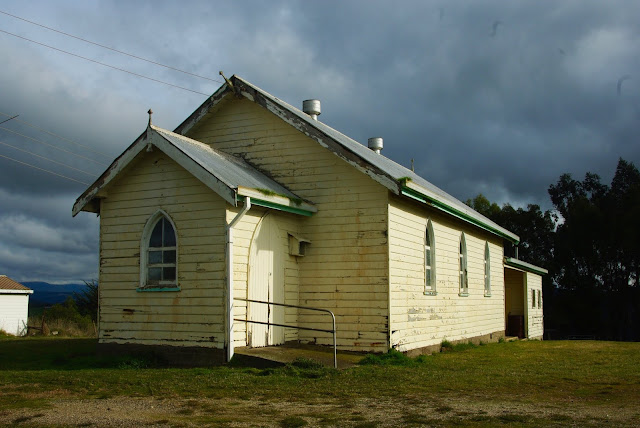 Lower Wilmot is small farming district approximately 8 kilometres north of the Wilmot Village. It is situated near the junction of the Wilmot and Hayes Roads, close to the Wilmot River. Regular Methodist services were held at Lower Wilmot shortly after the turn of the 20th century and fundraising for a local church began in 1903. A small timber church was completed in 1904 and opened in late January 1905 after “inclement weather” caused the cancelation of the original service. The North Western Advocate and Emu Bay Times carried a report of the fundraising tea meeting that went ahead on Monday 16 January but no published report of the postponed opening ceremony seems to exist. Like many churches in remote areas, regular newspaper reports about local religious activities are fairly limited. Apart from occasional reports of Sunday school anniversaries, harvest festivals or Ladies Guild meetings, little news about the church was published. The Methodist Ladies Guild seemed to be quite a
Post a Comment
Read more

No. 454 - The Seventh-Day Adventist Church at Deloraine 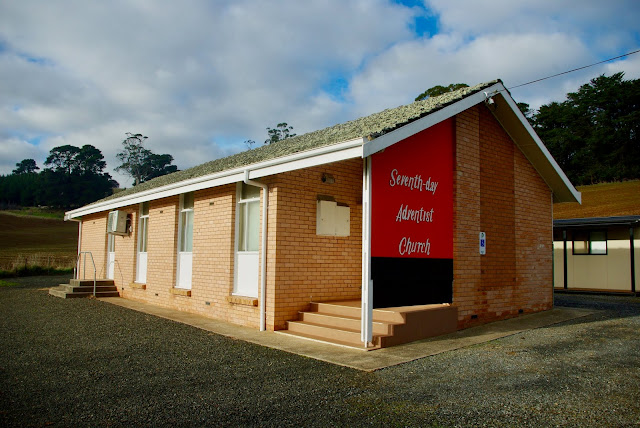 The Seventh-Day Adventist Church was established in Tasmania in 1888. The denomination originated in the USA in the 1860’s and in 1885 a group of Adventists travelled to Australia and began preaching in Melbourne. After a church group was established in Melbourne in 1886 members moved on to Sydney, Adelaide and Hobart. Public tent meetings were held in Sandy Bay in 1888 which led to the establishment of a church at Collinsvale and later at Hobart and Launceston. While Deloraine’s Seventh Day Adventist Church was established in 1968, the ‘Adventists’ had made a much earlier appearance in the town. On 14 June 1906 the Launceston Examiner reported an Adventist mission had arrived at Deloraine: “Seventh Day Adventists have been living on Deloraine [sic], and it is intended to hold special services next week. Their leaders, Messrs. Starr and Pallant, will give addresses, and the company number some good singers amongst them.” A week later the Examiner reported that the Adventists were usin
Post a Comment
Read more 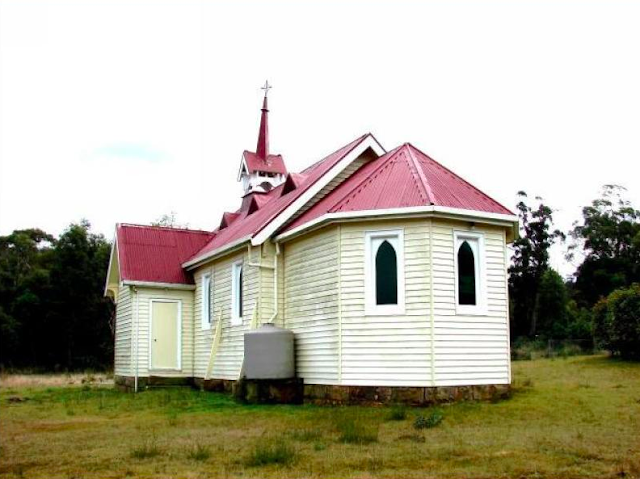 Levendale is a small farming community in the southern midlands about 20 kilometres northwest of Buckland. The area was unnamed until 1901 when a new State school was called ‘Levendale’ after “Leven Banks”, a prominent farm in the district. The surrounding district soon after adopted the same name as the school. Anglican services in the area first took place in local homes. Fundraising for a church began at the turn of the century. In 1904 the ‘travelling correspondent’ for the Hobart Mercury wrote: “The only public building is the State School, but a movement is on foot to erect an Anglican Church in some central position. A substantial sum of money has already been raised for the object”. By 1906 sufficient funds had been raised to build a church. The foundation stone for St Chad’s was laid in a ceremony in May 1906 led by Archdeacon Whitington. This was reported in some detail by the Hobart Mercury: “At the laying of the foundation stone of the new Anglican Church of St. Chad he
Post a Comment
Read more

No. 452 - The Wesleyan-Methodist Church at Bothwell - "From Bad to Worse" 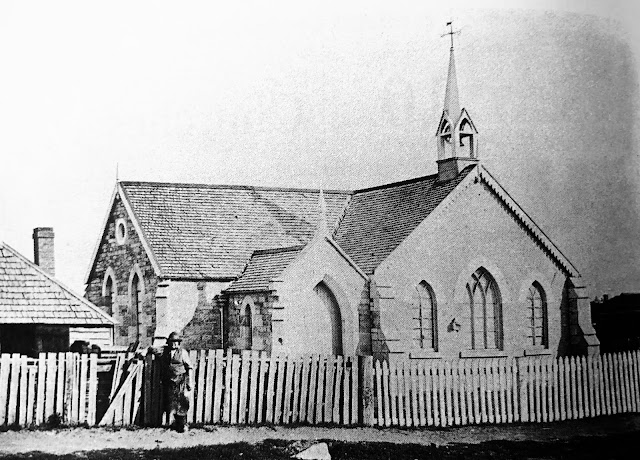 Bothwell is one of the oldest settlements in Tasmania and it is also one of the most important Georgian towns in the State. It is situated on the Clyde River, about 75km miles north of Hobart. The majority of the first settlers in the region were from Scotland. Bothwell once had four churches of which the Anglican, Uniting (Presbyterian) and Catholic churches remain. Bothwell’s Wesleyan Methodist church had a relative short life; opening in 1859 and services ceased at some point in the 1880’s. The church was demolished in 1903. The Methodists were active early in Boswell’s history and ministers had been despatched from Hobart for fortnightly services from 1836. In 1849 Bothwell was included in the Oatlands circuit but was transferred to the New Norfolk circuit in 1855. By the late 1850’s the Methodist community had gained sufficient momentum in the town for a chapel to be built. The Hobart Town Daily Mercury provides a detailed account of the church’s opening in March 1859: “On Sund
Post a Comment
Read more

No. 451 - The Melrose Methodist Church - "Not Quite All That May Be Wished" 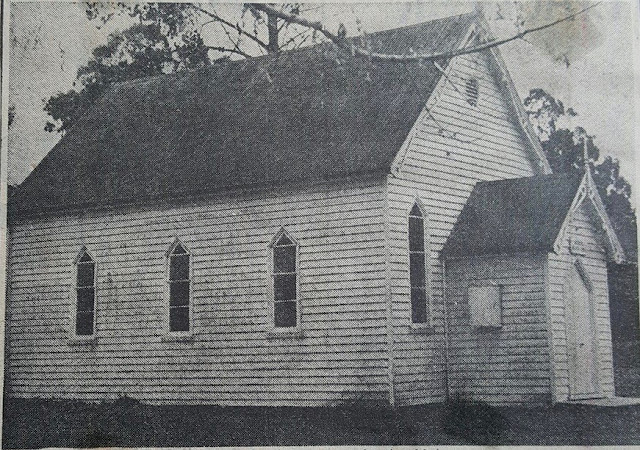 Melrose is small community approximately 10 kilometres south of Devonport. The area, originally known as Melrose Creek, was developed after the Don River Railway Company built a track through the area. Melrose once had a large limestone quarry that operated until the early 1960’s. There was only one church at Melrose although there was another Methodist church built at nearby Aberdeen. Reverend Walter Mathison, a Congregational minister based at Forth conducted the first religious services in Melrose in 1857. Worship took place in a slab-hut which served as a church. The hut was later used by local preacher, John Denny. There was an attempt to build a church at Melrose in 1880 and tenders were advertised for the construction of a Wesleyan church and ‘day school’ but this never proceeded. Sunday school and services were held in the Don Company Store at Melrose before a church was eventually built in 1892. There are two newspaper reports describing the church and both provide some deta
Post a Comment
Read more 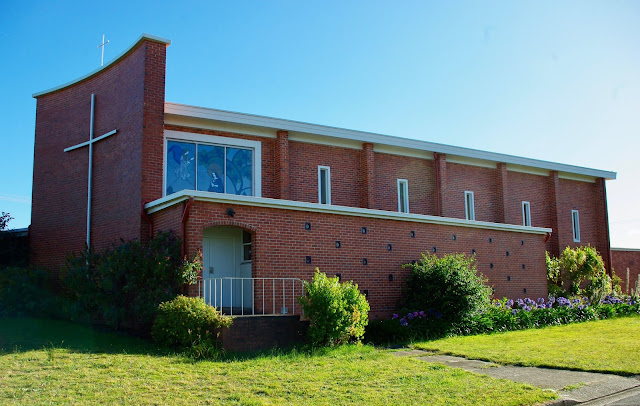 Ulverstone, or ‘River Leven’, as it was once called, was permanently settled by Europeans from the late 1840’s after Andrew Risby developed farmland from the thickly forested wilderness. During the 1850’s the district received new settlers and was also frequented by transient timber splitters. In 1854 Hugh Ross McKay opened the first store and the Leven Post Office opened in 1857. Despite the growth of River Leven, the settlement remained without a church until the late 1860’s. In 1867 the River Leven correspondent for the Launceston Examiner complained: “…At the Leven there exists not one place which is solely devoted to the worship of God. To be sure services are held in private dwellings by two or three denominations, which no doubt are useful in a degree; but several persons have an aversion to attend meetings held under these circumstances.” A year earlier, another River Leven local correspondent had offered a more positive view of religious life in the town: “The religious
Post a Comment
Read more
More posts