Showing posts from January, 2018
Show All

No. 52 - Wesleyan Chapel St Leonards - One Chapel and Three Schools 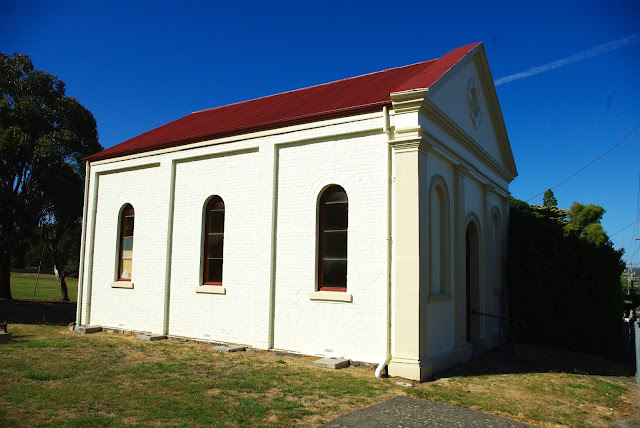 St Leonards or Paterson Plains as it was once called, had been settled for some 20 years before a church was established. In 1846, the village's first church, a Wesleyan chapel was built. It was designed by William Archer, a son of the public figure Thomas Archer.  At one time Presbyterian services were held in the Chapel with the permission of the Wesleyan Conference.  It is no longer used as a chapel and is now part of the St Leonards Primary School complex.  It seems remarkably well preserved as is its accompanying cemetery. The land on which the church was built is the gift of John Trethewie and he was amongst the first to be buried in the churchyard cemetery. Also buried here is William Walker Fox, Principal of Horton College, whose mysterious arched entrance is all that remains standing in an exposed field north of Ross. His daughter Mary, who was Headmistress of Launceston Methodist Ladies’ College (later to become part of Scotch Oakburn College) is also buried here as is
Post a Comment
Read more

No. 51 - Hagley Presbyterian Church - Built with Bricks of a Brewery 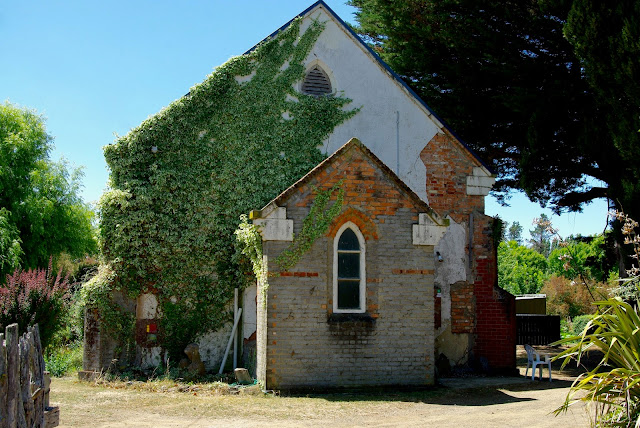 Presbyterian services were held in Hagley as early as 1853. Services were held in a Methodist Chapel and also at the old Anglican (Church of England) Church which was eventually purchased by the Presbyterians in the 1870’s. This was the same chapel that had served as Hagley’s first school from 1855. There seemed to be some symbiosis in this arrangement: "As the school was held in the church, services such as marriages caused breaks in the school time table - breaks that were appreciated by the scholars.” (Examiner ) With the needs of a growing congregation, the old Anglican Church was demolished and a new brick building was constructed. The bricks used to build the new church came from a demolished brewery, probably from Longford. It was opened in December 1879.  During the period of construction, the Presbyterians once shared the Methodist Church, which was a community with which they had a long standing good relationship. Like so many rural churches, the Presbyterians
Post a Comment
Read more

No. 50 - Church of Christ Margaret Street Launceston - From Mission Tent to Factory 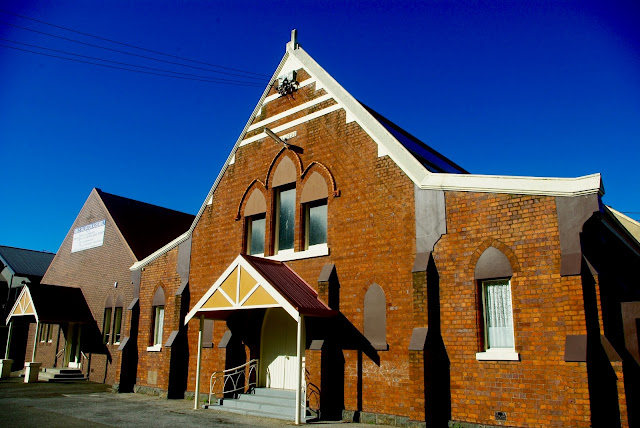 This church on Margaret Street Launceston, was built in 1898 for the Catholic Apostolic Church. In1913, it was purchased by the Church of Christ, which had been active in the city since 1884. The Church of Christ was formed in August 1884 after an advertisement was placed in The Examiner calling for 'Disciples of Christ' to start a new church. With nine member, meetings were initially held in various private homes and halls. A mission tent was erected on the corner of the Kings Way and Brisbane Street in 1913 and almost 300 people “committed their lives to Christ”. Reporting on the 50th anniversary of the church’s founding, The Examiner noted that: “ The church made slow progress until 1912, when an Evangelistic mission was held… As a result…the church became strong enough to purchase a building in Margaret Street, built by the Catholic Apostolic Church, and almost immediately the building had to be enlarged, and the church has made steady progress”. The Margaret Street Ch
Post a Comment
Read more

No. 49 - The Wycliffe Chapel Vincent Street Launceston - A Chapel of Ease 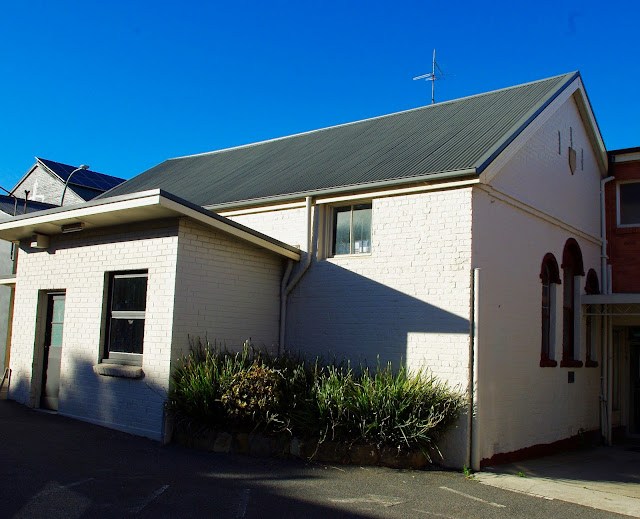 The Wycliffe Chapel is virtually invisible today. It is found in a narrow side street of Launceston and its front is a bicycle shop. Although only remnants of the original chapel are visible, it is nevertheless listed on the heritage register. The reason for this is because of its direct association with the Reverend Charles Price. “There remains little of physical worth with really only part of one facade visible. However, that the building still exists physically acknowledges the social importance of the Rev. Charles Price who amongst many other deeds, built the chapel at his personal expense for his Congregational ministry.” (1) The two other churches associated with Price, one in Tamar Street and the other at Inveresk, have long since vanished. The Vincent Street chapel was built in 1848 and is named after John Wycliffe (1320-1384) who first translated into English the Bible used by Independent Congregationalists and Primitive Methodists. It was built from private funds by Price
Post a Comment
Read more

No. 48 - The Pilgrim Uniting Church - 'Preaching without Cessation' 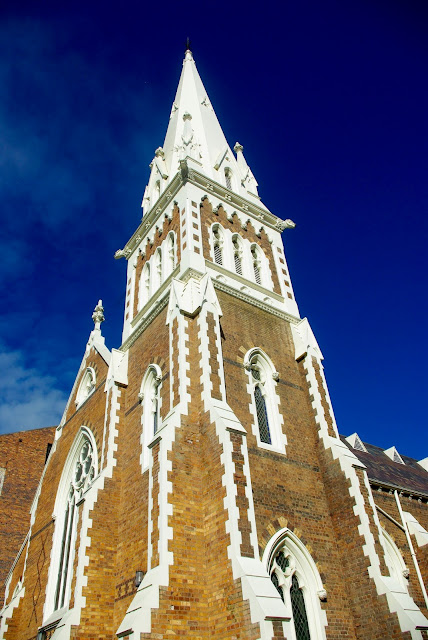 The origins of this Methodist Church, which is now the Pilgrim Uniting Church, was covered in an earlier blog entry on the former Wesleyan Church on Paterson Street (23 January 2018). The rapid growth of the Methodist movement in Launceston in the 1850’s soon gave rise for the need to build a much larger church. Part of the reason for the revival of Methodism arose out of the impact of dynamic preachers visiting Tasmania. The Examiner reported that in 1855: “…on the occasion of the visit of the Rev. William Taylor from America…. Meetings were frequently held on the old Launceston Market Green; the preacher's voice carrying easily to the farthest edge of the great crowd. At the conclusion of the gatherings a procession was formed and marched singing to the church. On the last day the Rev. W. Taylor preached without cessation until a cab finally rushed him away to catch the waiting steamer”. During this period the membership of the church doubled and a new building adjacent to the or
Post a Comment
Read more

No. 47 - St James Anglican Church Youngtown - The Bounty of the Harvest 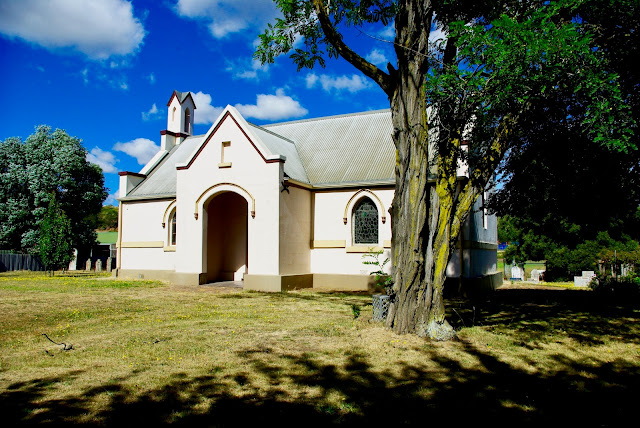 The St James Anglican Church in Youngtown is a remnant of the early colonial settlement of Franklin Village (formerly called Long Meadow). The Franklin Village Church, as it was called, was one of 10 churches planned for the North by Bishop Francis Nixon, the first Bishop of Tasmania. The foundation stone for the chapel was laid on the 15 April 1845, making it the seventh Anglican Church to be built in what was then Van Diemen’s Land. The building was erected by convict labour and was opened on 15 April 1845. On that occasion the burial ground was consecrated but the Chapel was only consecrated at a later time. It was a small church with only 14 pews and a narrow aisle with a fireplace at the southern end to keep the congregation warm. A village school operated in the chapel for a period after 1847. In 1926 the chapel was consecrated as St James Church. There are annual reports about harvest festivals at this church but the festival of 1924 is described with careful detail. Harves
Post a Comment
Read more
More posts