Showing posts from September, 2018
Show All

No. 250 - Our Lady of Lourdes at Devonport - Three Churches and a Funeral 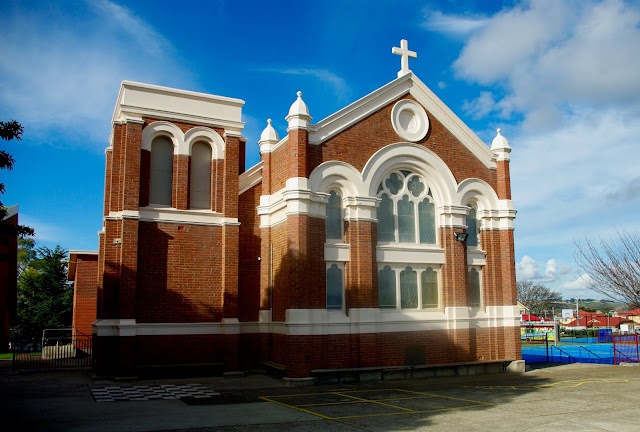 The first Catholic church at Devonport was established at Torquay in 1870 on the east side of the Mersey River. Known as the ‘Star of the Sea’ this timber church was transported across the Mersey to West Devonport in 1899 and reassembled alongside the convent that had been established by the Sisters of St Joseph in 1893. The rapid growth of Devonport meant that the old Star of the Sea was not adequate for the needs of the town’s Catholic population. Ten years after the relocated church had reopened, plans were made for its replacement with an imposing new structure. The design of the new church was ambitious and was never completed as envisaged: “The new Catholic church to be called Star of the Sea….will be of the Romanesque style of architecture, and with exception of Wynyard, will be the first of its kind in Tasmania, all the others being Gothic order…” The new church was to have a magnificent copper dome and spire: “The height of the dome will be 75 feet, and the tower about the sa
Post a Comment
Read more 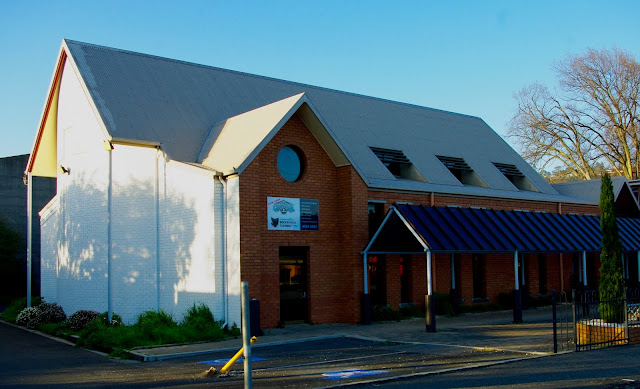 The former Christian Reformed Church in Frederick Street closed about seven years ago. It now houses the Indoor Rock Climbing Centre. The Christian Reformed Churches of Australia (CRCA) includes over fifty congregations across Australia established since 1951.    It falls within the Calvinist or Reformed stream of the Christian Church. “The Reformed Churches of Australia is the name of the church established by post-war Dutch immigrants of the Reformed faith in Australia. It is sometimes incorrectly referred to as the Dutch Reformed Church. The first Reformed Church of Australia was established at Kingston in 1952. Its name was chosen to make clear the desire to integrate into the Australian community and to remove the stigma of being Dutch and 'foreign'. Nevertheless, it was based on the principles of orthodox Reformed theology so that its members were predominantly former members of the Gereformeerde Kerken in the Netherlands. As Dutch migration to Tasmania co
Post a Comment
Read more

No. 248- The Selbourne Methodist Church - 'A Virtual Church' 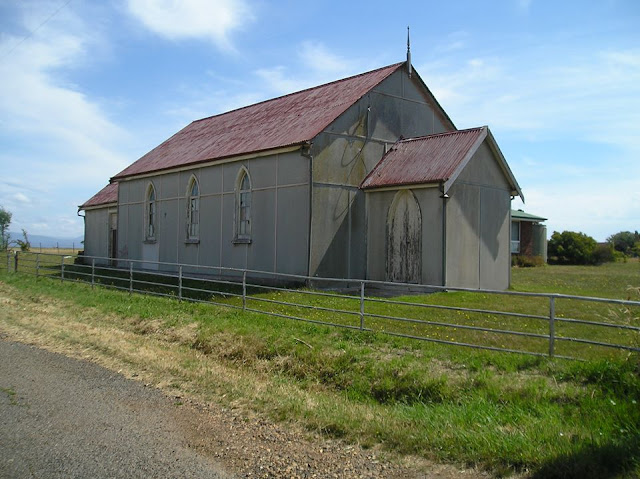 The Methodist church at Selbourne has vanished. Before going out to photograph churches I use Google Maps ‘street view’ to check the location and properly identify the building. But when I visited the site on Selbourne Road I found that the church was no longer there. On rechecking Google Maps I discovered that while the church was visible in ‘street view’ [taken in January 2008] it had vanished in a more recent satellite photograph. [See screen shots below]. The church had either been removed or been demolished some time after January 2010 as a photograph was taken of it in that year. [See below] The 2010 photograph reveals the church to be in reasonable condition so hopefully it has been removed rather than demolished. I will follow this up when in the Selbourne area again. The church’s history is fairly short as it was open for a little over 60 years. There is a record of its opening in January 1922: “The newly erected Methodist Church at Selbourne was opened on Sunday, January 8
Post a Comment
Read more

No. 247 - Christ Church at Ringarooma 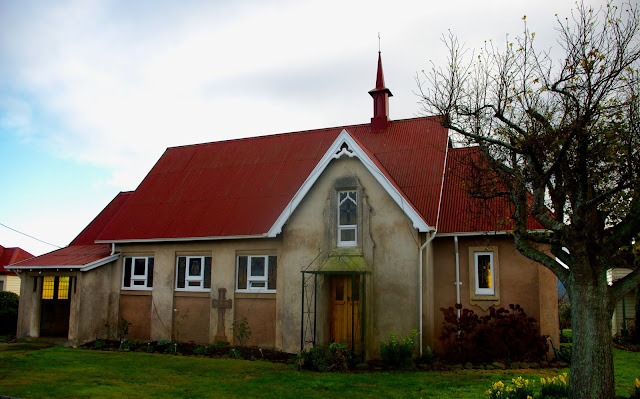 The first Anglican church at Ringarooma was the non-denominational ‘Union Chapel’ that was purchased in 1883 and named ‘Christ Church’. This weatherboard building was used for over 50 years before it was replaced with a new concrete church built in 1936. The old ‘Union Chapel’ was renovated and moved to a new location behind the new church where it was used as a parish hall and for Sunday school activities. Fundraising for a new church building began in the 1920’s, as the old building was considered no longer adequate for religious services. In 1925 the Ringarooma correspondent for The North East Advertiser wrote: “A well attended meeting of parishioners was held in Christ Church on Monday, the object being to consider ways and means for building a new church. The present building is one of the oldest in the district, and is now almost in extremes. It would cost almost as much to put it in proper order as to build a new edifice. The meeting was enthusiastic, and it was unanimously
Post a Comment
Read more

No. 246 - The First Holy Trinity Church at Launceston - "The Tramp of Soldiery" 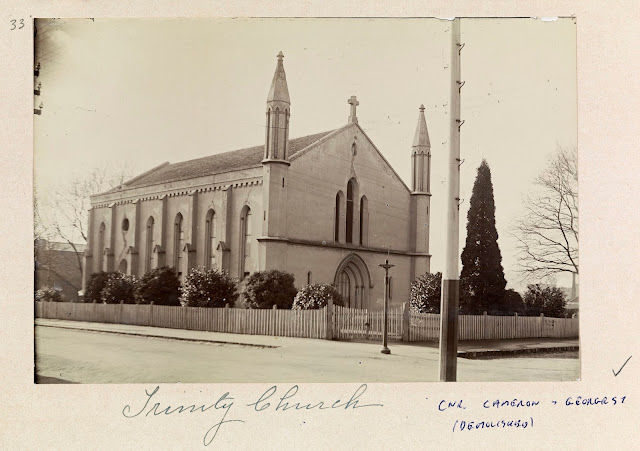 Launceston's magnificent Holy Trinity Church on Cameron Street replaced a church that built in 1842. This article traces the fascinating history of the original church. Launceston’s first Anglican church, St John's, opened in December 1825 and was the only ‘Episcopalian’ Church in Launceston for 17 years. As the town began to expand, and the population increased, the need of extra church accommodation was felt. In May 1838, a meeting was called to consider the matter and it was decided to erect a second church. A committee was formed to carry this into effect: “The committee held their, initial meeting on the 18th May, and one of their first acts was to bring forward a resolution to the effect "that the church wardens and trustees of the Church of St. John's be added to that committee," thus showing that the new church was to be erected in no spirit of opposition to the mother Church of St. John's, which in church building is unfortunately too often the case”
Post a Comment
Read more 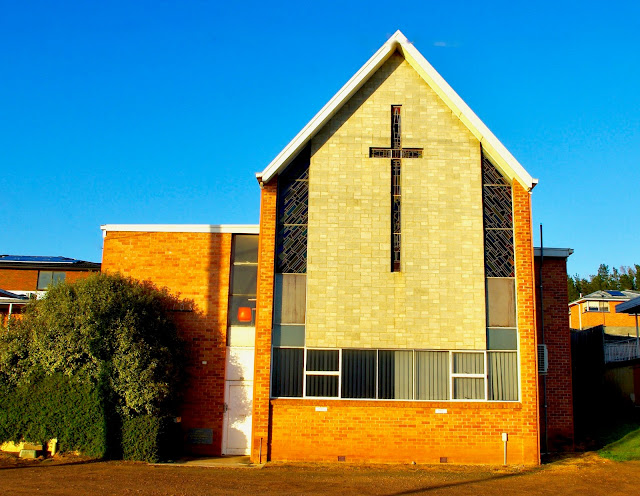 St David’s at Riverside was originally known as the Cormiston Anglican Church. Dorothea Henslowe’s ‘Our Heritage of Anglican Churches in Tasmania’ states: “The existing wooden church in 1963 was sixty-three years old and was originally a school”. This is contradicted by a report in the Examiner from March 1922 regarding a fundraising event for the Cormiston church: “A social and dance was held in Mr Luck’s granary, Danbury Park…when a good crowd assembled from surrounding districts for the Anglican Church which has recently been erected”. It is possible that there may been some confusion with the Methodists, who had used the school building at Cormiston for services from about the turn of the century. Newspaper reports suggest that this building was also used by the Anglicans for social and fundraising activities. The original timber Anglican church of St David’s was replaced by the modern brick church which now stands on the West Tamar Highway. The foundation stone for the churc
Post a Comment
Read more 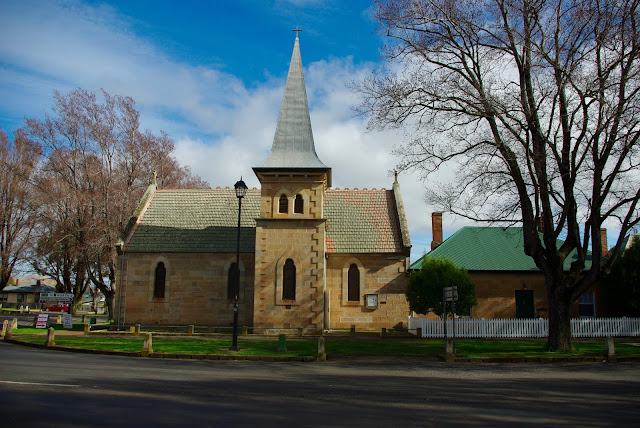 Our Lady of the Sacred Heart at Ross is a lot younger that it appears. It was built in 1920 in ‘Federation Freestyle’ on an old Colonial Georgian base that had previously housed a residence, store and bakery belonging to the Bacon family. The Church stands on one of the “Four Famous Corners” of Ross. These being: Temptation – the Man-O-Ross Hotel; Recreation – the Town Hall (with its dances); Damnation – the former gaol… and Salvation, the Catholic Church! Although the church was built less than 100 years ago, Mass was held in a variety of locations in the mid 19th century: “The first priests to visit Ross generally stayed at The Barracks and conducted services mainly for the troops stationed there. Earlier services were conducted from the ‘Female Factory’ site after it closed down as a prison. The Catholics were mainly convicts and... and were too poor to build their own place of worship”.  (1) By the late 19th century Ross Catholics were served by priests from Campbell Town and in t
Post a Comment
Read more
More posts