Showing posts from November, 2018
Show All

No. 289 - The Former Congregational Church on Davey Street Hobart 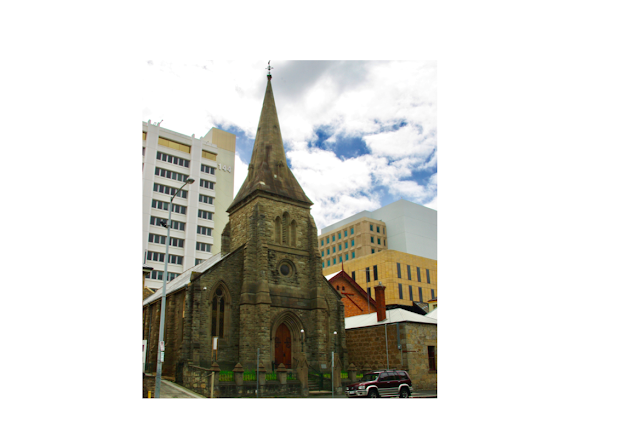 The former Congregational Church in Davey Street, Hobart, is a monument to Henry Hopkins (1787–1870), a businessman and philanthropist who was a leading Congregationalist and supporter of the Tasmanian anti-transportation movement. Henry Hopkins and his wife Sarah, were wealthy independent settlers who arrived in Van Diemen’s Land 1822. In response to their efforts, the Reverend Frederick Miller arrived in Hobart from Highbury College in London in 1830 to become the first settled Independent minister in Australia. Due to the financial support of Hopkins, Congregational chapels became widespread in southern Tasmania, but were not as extensively in the north, where Baptist and Methodist communities were more prevalent. In 1837 Hopkin’s funded an Independent chapel in Collins Street. When this was outgrown, it was again Hopkins who provided substantial funding for the Congregational church built on Davey Street. In June 1853 The Courier reported on plans for a new Independent Church in Ho
2 comments
Read more

No. 288 - The Original Presbyterian Church at Mole Creek 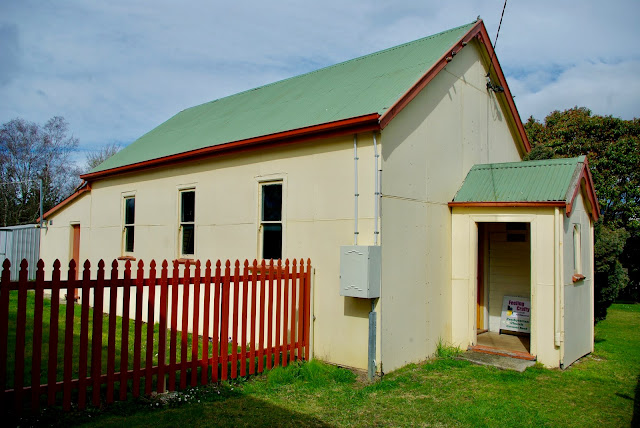 The turn of the 19th century was a time of active church building at Mole Creek. An Anglican church was opened in 1901 and the Wesleyan Methodist church was rebuilt in 1899. In the same year ‘Mr Cameron and Mr Baker and other friends’ were the principal movers in establishing a Presbyterian church in the town. In December 1899, the Daily Telegraph reported that “the Presbyterian church is now erected, and preparations are being made for the opening services”. However there seems to have been some delay in finishing off the church because more than a year was to pass before it was ‘reopened’. The Launceston Examiner reported on this “Reopening Ceremony” in April 1901: “A little over 12 months ago the Presbyterians erected a church. Recently also a new organ was purchased, and new pews have been made, and during the past fortnight the church has been nicely lined and painted. Easter Sunday was the day appointed for holding the reopening services, and the people of Mole Creek were
Post a Comment
Read more

No. 287 - The 7th Day Adventist Church at Glenorchy 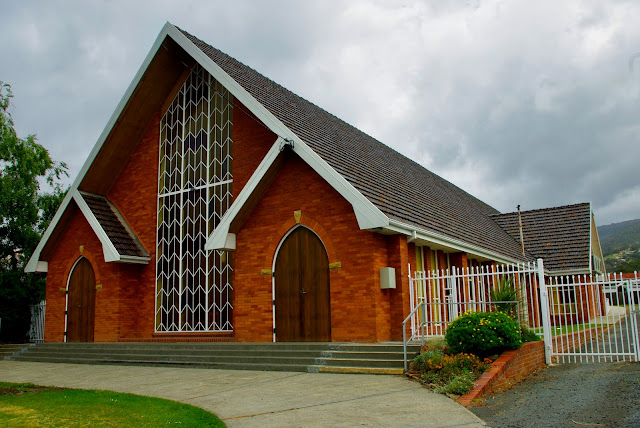 No. 286 - The Former Congregational Church at Devonport - ' A Boat Shed, A Bazaar and Three Larrikins' 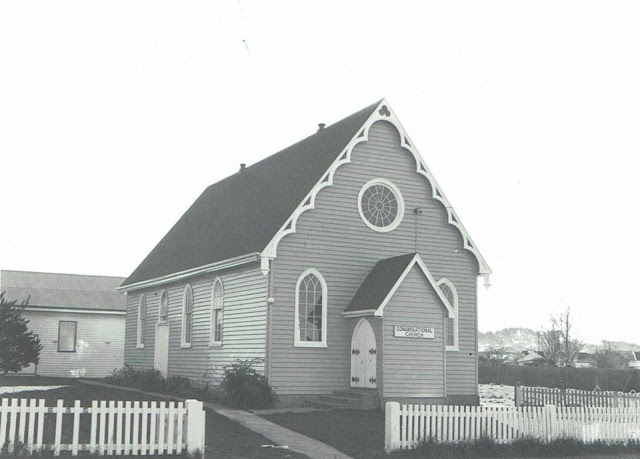 West Devonport’s oldest church was the former Congregational Church, which originally stood on lower Steele Street before it was moved to William Street in the 1950’s. Unfortunately the church, which was one of Devonport’s oldest buildings, has been lost. Its history, which stretches back to the 1860’s, is an important part of the city’s rich religious heritage and also that of the Congregationalists who established an early presence on the North West Coast at Don and Lillico Beach. Before the church was built, Congregational services took place in Thomas Hainsworth’s Sunday school room which was located on the Esplanade near Turton street. The Sunday school room was originally a boatshed adjoining ‘Greystone House’ (the house being built from ballast stone dumped by ships on the shore). In 1870 land for a Congregational church was donated by Mr George Best. The church was built by Michael Wood and completed and opened on 26 November 1871. There is a brief mention of its opening pub
Post a Comment
Read more 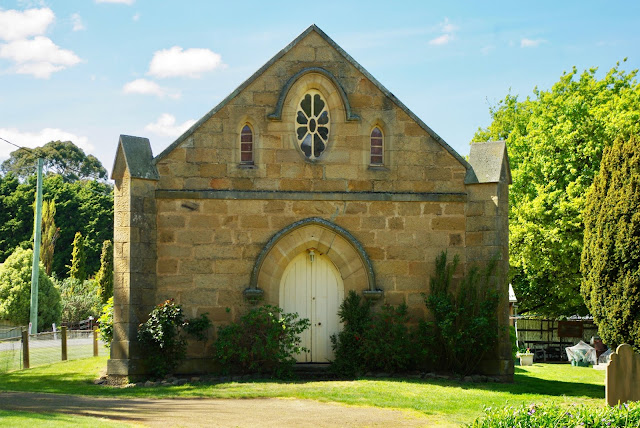 Bagdad is a small town 37 kilometres north of Hobart that was once a staging post for horse drawn vehicles before they continued the arduous journey up Constitution Hill. Bagdad is now a mixed farming and commuter settlement. It is one of a handful of places in the area with Middle Eastern names, which include Jericho, Jerusalem, the Jordan River and Lake Tiberias. The names were supposedly given by Private Hugh Germain, a member of the Royal Marines, who in the early 1800's travelled through the area on a hunting expedition. It is said that Germain carried a copy of the Bible and the Arabian Nights, inspiring him in giving places names to the areas he visited. The Congregational or Independent Chapel at Bagdad was established in 1842. It became part of the Uniting Church in 1977 before closing in 2006. The Bagdad Congregational church was built as a result of the efforts of Mr George Armytage and Mr John Palmer. There is a brief report on the foundation stone-laying ceremony in th
Post a Comment
Read more 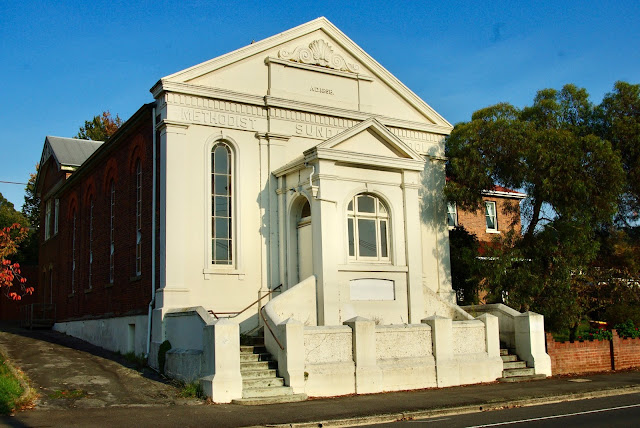 The first reference to the establishment of a Methodist church in Margaret Street in Launceston was noted in the minutes of the quarterly meeting of the Launceston Circuit in May 1836 in which it was “deemed desirable to have a place in which to hold religious services in the south end of town”. The minutes also record that: “Mr Sherwin having offered to the connexion a plot of land on which to build a chapel, it is resolved that Mr Sherwin’s offer be greatly accepted and that the property be settled on the conference plan without delay”.  (1) There is no record or report of the church’s opening but the Margaret Street chapel appears on the Methodist Circuit plan for January 1837 and in the same year it was decided that “preaching be held at Margaret Street every Sunday afternoon”. The building was of wood and cost £250. In 1858 the timber church was replaced by the Sunday school building which now stands on the site. The building was designed for use as both a church and a Sunday sc
Post a Comment
Read more 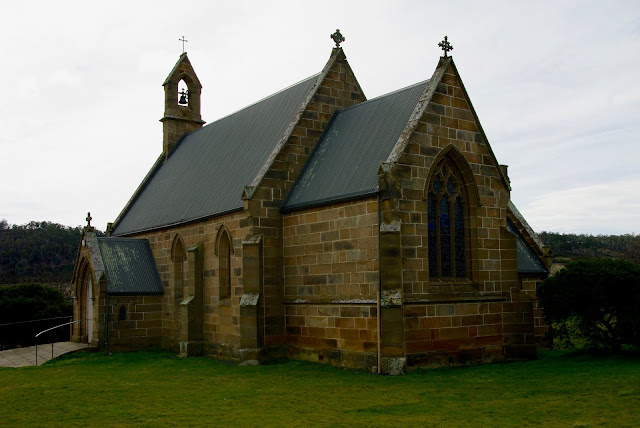 St Paul’s at Oatlands reflects the lives of two remarkable men; Bishop Robert William Willson, the first Catholic Bishop of Hobart and English architect and designer, Augustus Welby Northmore Pugin. When Bishop Willson arrived in Van Dieman’s Land in 1884 he brought with him Pugin designed and inspired regalia needed to establish the new diocese. He also brought with him texts, drawings and models that were to be used to guide the building of Gothic Revival churches in the colony. Willson was a close friend of Pugin and shared the notion that the building style of the High Middle Ages could serve to revive and deepen the Catholic faith. The model used for St Paul’s was that of a small English medieval church. The design was drawn from one of three detailed models built by George Myers. The models had been created because it was thought that the skills necessary for builders to interpret and use conventional architectural plans were not available in Van Dieman’s Land.(1) On 9 April 1
2 comments
Read more
More posts