Showing posts from February, 2019
Show All

No. 359 - The Brickendon Convict Chapel - 'An Agent of Reformation' 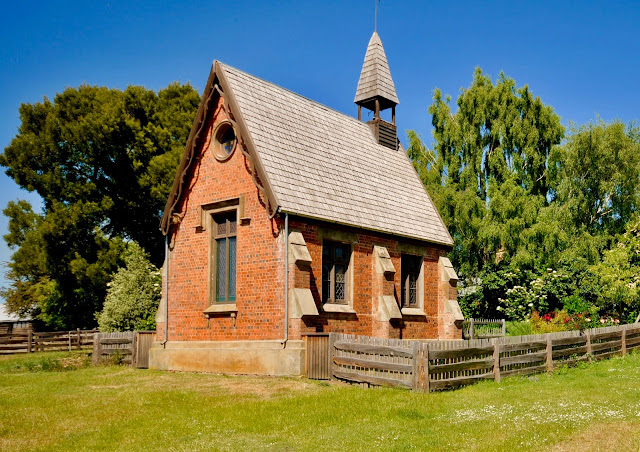 Brickendon Farm Village near Longford in northern Tasmania is one of 11 Australian convict sites listed by UNESCO as having global cultural and heritage value. The farm village, of which the chapel is particularly significant, was part of Brickendon Estate, a 465 hectare grant taken up by William Archer in 1824 on land opposite his brother at Woolmers Estate. William Archer developed Brickendon into a mixed farming business and used a convict labour force of about 50 people who were housed in the small village. By the 1840's Brickendon was highly regarded as one of the best farms in the colony. The estate included a two-storey brick Georgian country house and numerous farm buildings and labourers cottages. The Chapel was built with the specific purpose of meeting the religious needs of convict workers. Built in the mid 1850’s, the Chapel has a high pitched shingled gabled roof, bell tower and gabled foyer. The chapel is highly decorative with many neo-gothic features including bri
Post a Comment
Read more 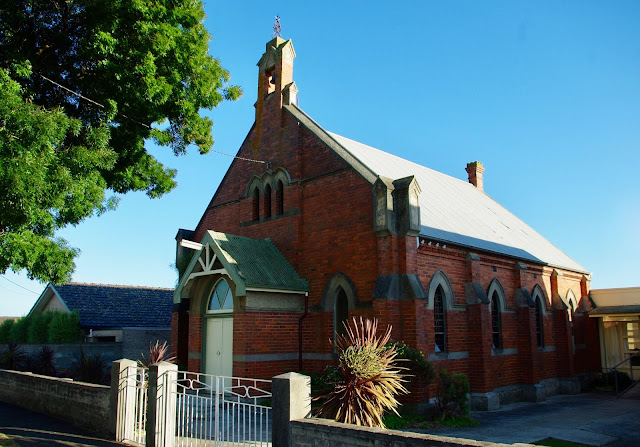 Scottish migrants began to establish Presbyterian churches in rural north west Tasmania from the 1880’s with the first communities centred around Don and Castra. The Ulverstone church was only built in 1910 although services were previously held in the Odd Fellows Hall on Main Street and later in the old Congregational church on Alexandra Road. In 1908 the Presbyterians considered purchasing Congregational church but opted instead to build a new church at a site purchased on Main street. The foundation stone for this church was laid on 18 May 1910 by Senator Colonel Cameron. Substantial progress had already been made with the building at the time of the stone-laying ceremony. The North West Post described the building which was nearing completion: “The new church, when completed will be a decided acquisition to the architecture of the street and will be of handsome proportions. It measures 40ft by 30ft, and is built with a view of enlargement at some future time. The managers wisel
Post a Comment
Read more 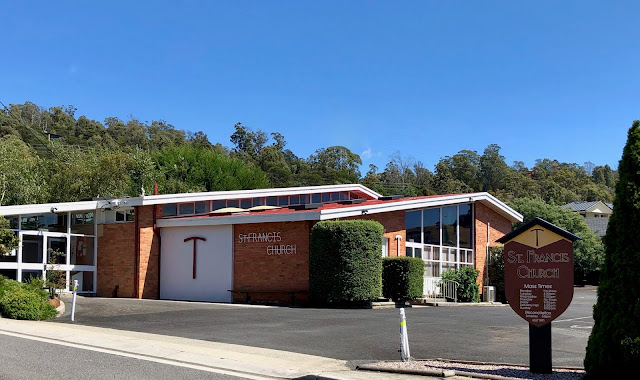 St Francis’ Church Hall and Friary at Riverside, a suburb of Launceston, opened in September 1962. However, the church’s origins began with the establishment of the Church of the Assumption in Trevallyn which opened in August 1950. In 1956 a new Trevallyn-Riverside parish was created which was placed under the authority of the Franciscan Order. In addition to the Church of the Assumption at Trevallyn, a Mass centre was established at Cormiston Road in Riverside. As the population centre of the parish shifted to the rapidly growing suburb of Riverside, a third centre was built at Pomona Road. This was to become the site of St Francis Church. In time, both the Church of the Assumption and the Cormiston Mass centre closed and the parish developed around St Francis Church Hall. In August 1982 the hall was enlarged and renovated to transform it into a modern church and a more suitable a centre for the Riverside parish. The Franciscans have departed Tasmania in recent years however St
Post a Comment
Read more 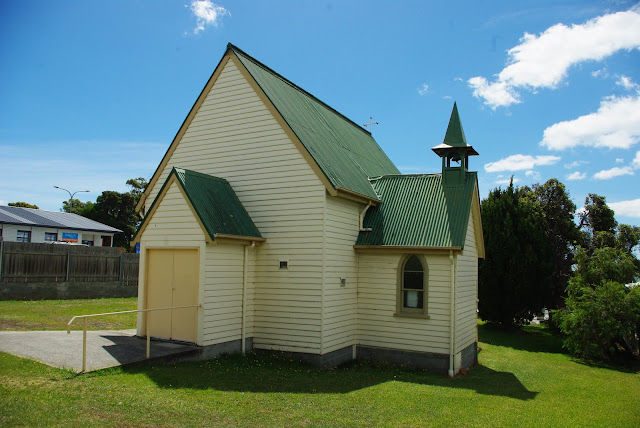 Bridport is a resort town on Tasmania’s north-east coast situated at the mouth of the Brid River. It was once an important port for hinterland settlements during the mining boom of the late 19th century. Bridport was part of the Scottsdale parish and regular Anglican services were held in the town before the end of the Great War. By the late 1920’s fundraising began for building a church and tenders were advertised in early 1931. "The foundation stone was laid in a ceremony on 17 May 1931. The North Eastern Advertiser noted that it was “the first ceremony of its kind In the parish for the churches of St Paul [Springfield] and St Barnabas [Scottsdale] appear to have no foundation stones in the commonly received sense of the term” . Building was completed within two months and the church was dedicated by Bishop Hay on Sunday 19 July 1931. The North East Advertiser reported: “On Sunday afternoon last, all roads in the North-East led to Bridport. Nearly half an hour before
Post a Comment
Read more

No. 355 - The Nabowla Presbyterian Church 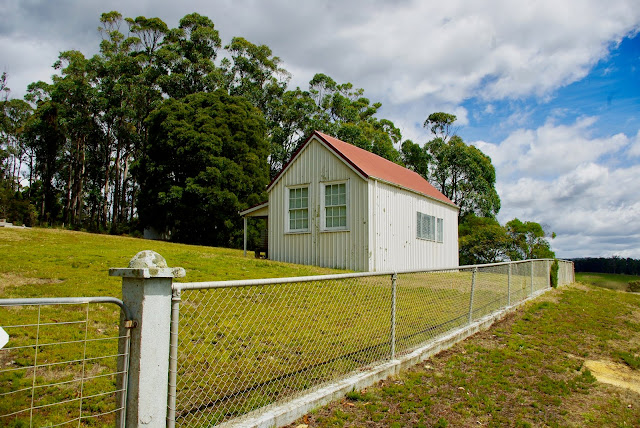 Nabowla is a small settlement located on the old Lisle Road in North East Tasmania. It was established around an important railway station on the North Eastern Line. The settlement was originally named Pagunta, then became known as Lisle Road Station, but this was changed to Nabowla in 1913. Apart from the railway station, Nabowla had three saw mills, a State school, a public hall, a general store, a post office and two churches. The Nabowla Presbyterian church held its services in the State school. When a new State school was opened in 1914, the Presbyterians converted the old school room into a church. The exact date when the school formally became a church is not known but after 1918 reports refer to the “Nabowla Presbyterian church” rather than the “church building”. In any case, modifications to the building were minimal and as may be seen from the photographs, it still very much resembles an old rural school. The earliest head stones in the adjoining cemetery date back to the
Post a Comment
Read more

No. 354 - Christ College and its Chapel at Bishopsbourne 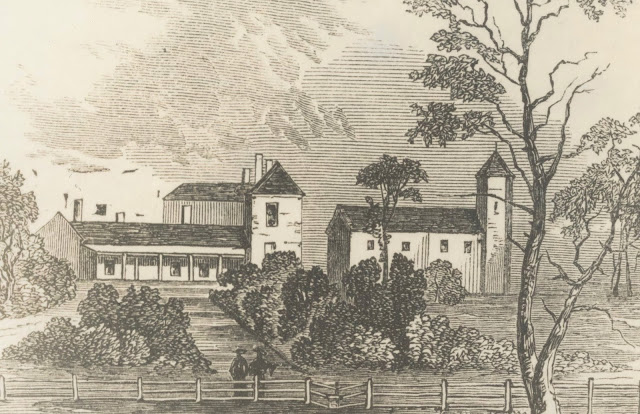 One of Tasmania’s oldest educational institutions was founded in rural northern Tasmania in the village of Bishopsbourne. Only fragments of the College and its chapel remain but these are in effect the ‘foundations’ of higher education in the State. In 1845 the Bishop of Tasmania, Bishop Nixon, purchased 1218 acres of the Vron property at Bishopsbourne, which included a 'mansion', to establish a theological college. The College was opened on 1 October 1846 with the hope that it would develop along the lines of an Oxbridge college and provide the basis for university education in Tasmania. It was also intended to prepare men for the priesthood. The Hutchins School and Launceston Grammar were founded at the same time to act as feeder schools to the College. However, Christ College never really developed as its founders hoped, and a depression in the colony, the remoteness of the site, and financial problems contributed to its closure in 1856. Reverend W.H. MacFarlane, the Rector
Post a Comment
Read more 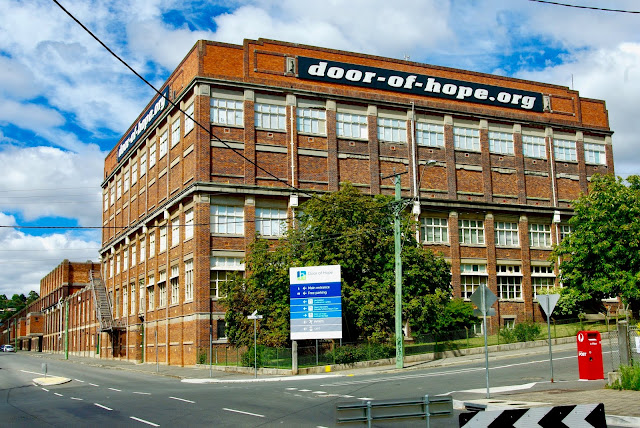 A general approach taken in this blog is to record the history of all buildings in Tasmania designed or purpose-built as churches. In this entry I will deviate from this approach for two reasons. Firstly, as a part of the Church of Christ, ‘The Door of Hope’ has a long history in Launceston which goes back more than 130 years. Secondly, ‘The Door of Hope’ is located in a former factory, which itself is of historical significance and an iconic building that is representative of Launceston’s industrial era. The Church of Christ in Launceston was formed in August 1884 after an advertisement was placed in the Examiner calling for ‘Disciples of Christ’ to start a new church. With nine members, meetings were initially held in various private homes and halls. A mission tent was erected on the corner of the Kings Way and Brisbane Street in 1913 and almost 300 people “committed their lives to Christ”. In 1913 the Church of Christ purchased the former Catholic Apostolic Church (built in 18
Post a Comment
Read more
More posts