Showing posts from June, 2018
Show All

No. 185 - Former Winkleigh Methodist Church - 'All the Apothecaries in Tasmania' 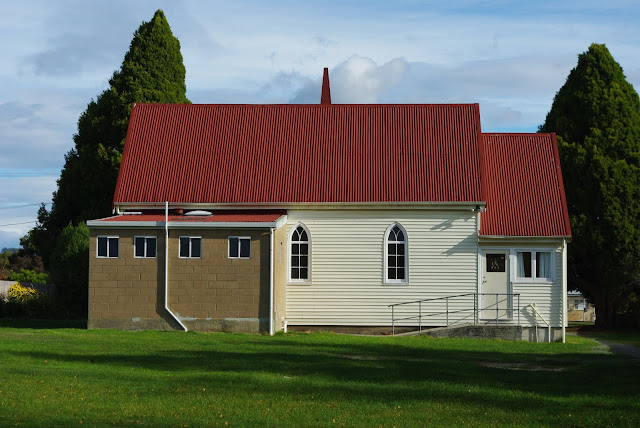 Built in 1891, the Winkleigh Methodist church was removed to nearby Exeter in 1951 for use as a hall and it now stands behind the Exeter Uniting Church. The Wesleyans were active in Winkleigh in the1860’s sharing a church with the Presbyterians that had been built by Thomas Stonehouse for use by “no particular sect”. By the 1880’s Stonehouse’s church had fallen into a state of disrepair and an issue of ownership of the land further contributed to the ending of the collaboration between the two denominations. The somewhat partisan Winkleigh correspondent for The Examiner agitated for the construction of a new church: “A short time ago it was mooted in my hearing that it (the church) was likely to go through repair shortly. Ah, I think it will not be advisable to try that, because it is sure to be a failure. I defy all the apothecaries in Tasmania to compound a dose sufficiently nutritious to place that chapel in a state of convalescence. It was past cure long ago; it is riddled with di
1 comment
Read more

No. 184 - St George's Anglican Church - 'Morals and Manners at Mathinna' 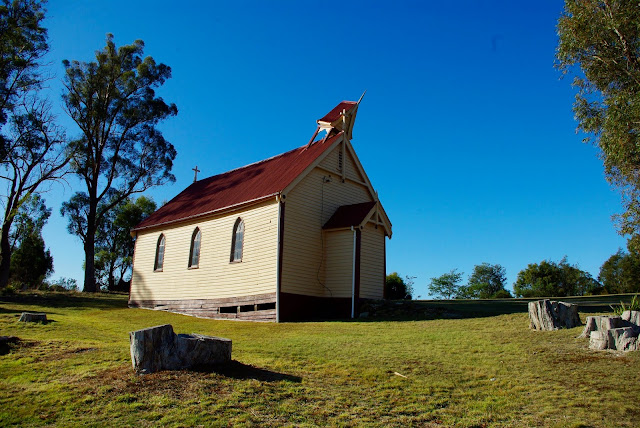 The settlement of Mathinna in the upper reaches of the South Esk River Valley is now a shadow of the thriving town of a century ago. The discovery of gold accelerated the growth of the town from the 1870’s and the establishment of the Golden Gate Mine briefly turned Mathinna into the third largest town in Tasmania. Today less than 150 people live at the settlement. By the 1890's there were three denominations at Mathinna. St George’s was built in 1896 on a hill overlooking the town. The opening of the church on Sunday 29 March received little attention in the press apart from a brief report that Reverend Vale preached the first sermon and this was “attended by crowded congregations”. This blog entry will draw on a few events in Mathinna’s history that are connected, albeit loosely, to St George’s church. These vignettes of church and town allow a glimpse into the lives of the people of Mathinna, which in some respects are not that far removed from our own times. Morals and M
2 comments
Read more 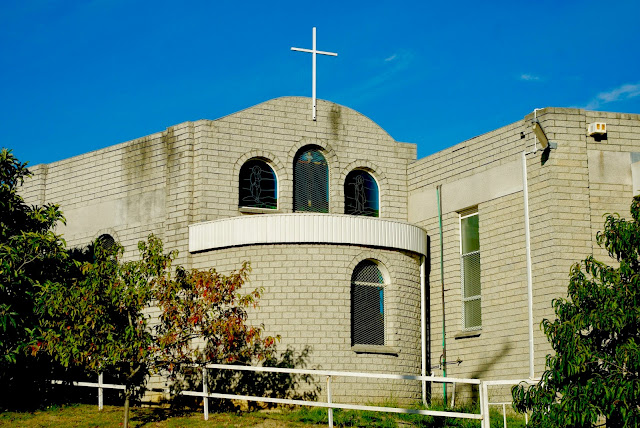 In the 1950's and early 1960's numerous Greek migrants arrived in Tasmania as a result of Australia's new immigration policy and the signing of a major immigration agreement with Greece in 1952. Many of these new arrivals worked on the Hydro-Electric Scheme at Tarraleah, Poatina, Wayatinah, and Bronte Park. In 1968 the Greek Orthodox Community of Launceston was formed. In 1992 a Greek Orthodox Church, the Dormition of Our Lady, was opened in South Launceston. In the Orthodox Church the passing of the Virgin Mary from earthly life is celebrated on a feast day held on 15 August in honour of the ‘Dormition’. This corresponds with the Assumption of Mary in the Western Church. The term ‘Dormition’ arise from the Latin ‘dormitio’ meaning ‘falling asleep’.  Sources: http://www.utas.edu.au/library/companion_to_tasmanian_history/G/Greek%20Orthodox%20Church.htm
Post a Comment
Read more 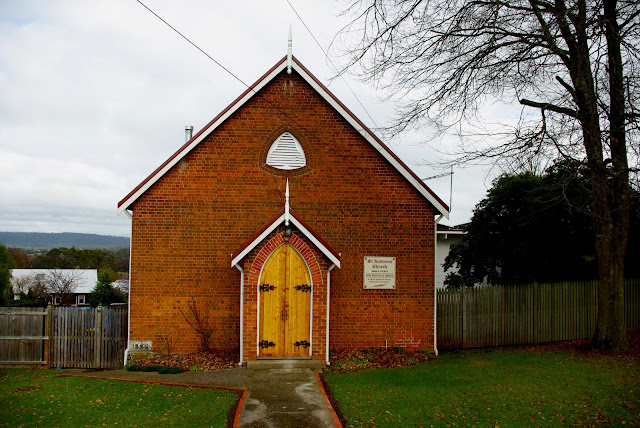 The first Presbyterian church at Deloraine was founded following a petition to the Governor, Sir William Dennison, requesting a grant of land for a church and manse as well as a  schoolhouse. The petition was successful and a committee was established to oversee the building of a church. In the interim, ‘Mr Humphrey’s schoolhouse was secured as a temporary place of worship. The Reverend R.K. Ewing held the first service here on 12 November 1854. With the completion of a timber church, Mr Malcolm Duncanson was appointed as the first permanent minister. The church remained in use until 1883 when it was decided to replace it with a brick building. The old timber church was removed and the site was used for the manse. The foundation stone for the new brick church was laid on 8 April 1883 and St Andrew's opened for its first service on 8 June 1884. Reverend Edward Cowper Tennent and Reverend John Lyle delivered the opening sermons. St Andrew’s closed following the amalgamation with
Post a Comment
Read more 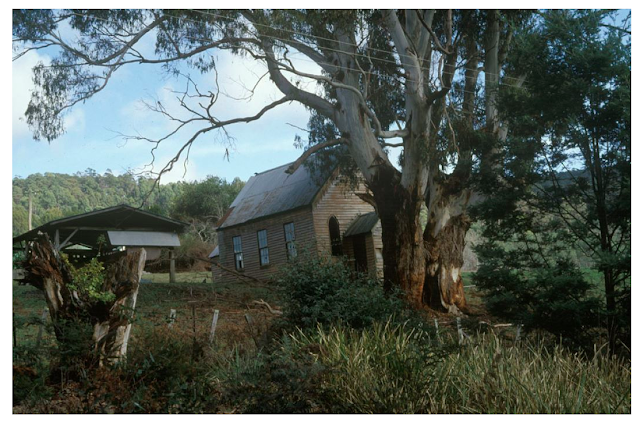 The former Wesleyan church at Underwood is one of the oldest churches in the Lilydale district. Underwood was established as the site of a timber workers' camp and the Grubb and Tyson’s sawmill that operated in the 1860’s. In 1860 an 8-mile long wooden track was built from Underwood to Mowbray to carry sawn timber to Launceston. Falling prices and problems with timber supply forced the mill to close in 1869. The former sawmill made a direct contribution to the ‘foundation’ of the Wesleyan church, which opened in 1882: “About a dozen cottages built for their employees were abandoned. Mr Thomason obtained the bricks from the chimneys of the cottages to construct the foundation of the Methodist Church at Underwood”. John Thomason was not just the founder of the Underwood church but was also influential in the spread of Methodism in the district. Thomason was a Shetlander who had started life as a sailor. After he arrived in Tasmania he became a carpenter, a mine manager, an orchardis
Post a Comment
Read more 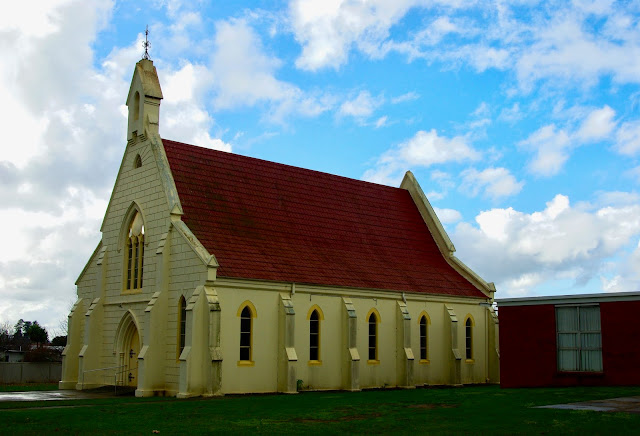 The first Wesleyan church at Westbury was built in 1840 but by the 1850’s this building was already considered too small for the congregation. Plans were soon made to build a new church but it took until 1866 for this to be accomplished. This is the story of the founding of the new church which  continues to serve Westbury to this day. The foundation stone for the new church was laid on Tuesday 24 October 1865. Reverend Quick of Horton College assisted with the ceremony, which was reported by the Launceston Examiner: “The Rev. Quick then, the stone having been lowered upon the foundation, having proved it plumb, square and level, declared it to be laid in the name of our Lord Jesus Christ”. After a luncheon served in the old chapel attended by 300 guests, a public meeting was held in the afternoon with Reverend Quick delivering a speech. The speech is interesting in that it reveals a change in how the Wesleyans viewed their places of worship as the colony grew and prospered: “Up to t
1 comment
Read more

No. 179 - The Carmelite Monastery at Launceston - "It is not I who locks them in" 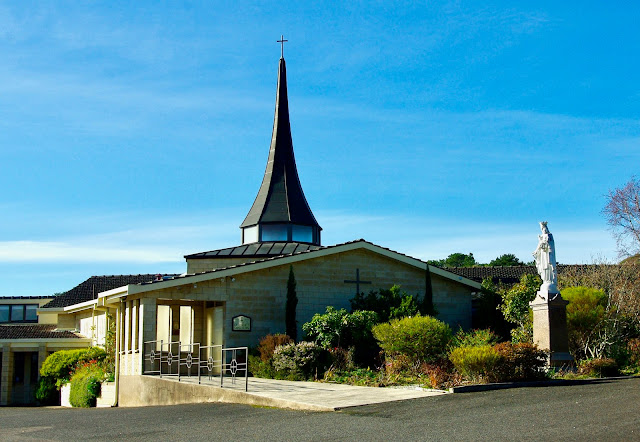 The Discalced Carmelites or Barefoot (sandalled) Carmelites were formed in the 16th century following Saint Teresa of Ávila’s initiation of reform of the 12th century Order. The first Carmelites in Australia arrived in Sydney in 1883. By the mid 20th century, all States apart from Tasmania had established Carmelite communities.  In 1948 this changed when the Archbishop of Hobart, Dr Ernest Tweedy, enabled the establishment of the Order in Northern Tasmania.  The first 'convent' was established at Longford with the expectation that a monastery would be built at West Launceston. The Longford monastery was housed at Longford Hall, a century old building which was remodelled to meet the requirements of an enclosed Order. In June 1948 eight Carmelite sisters arrived at Launceston by air from Adelaide. A report in the Advocate described how the sisters would live: “The sisters…. will now be seen by no one except close relatives, to whom they may speak through a grille. At other tim
1 comment
Read more
More posts