Showing posts from August, 2018
Show All

No. 222 - The former Presbyterian Church at Lilydale - 'The Lilies of Lilydale' 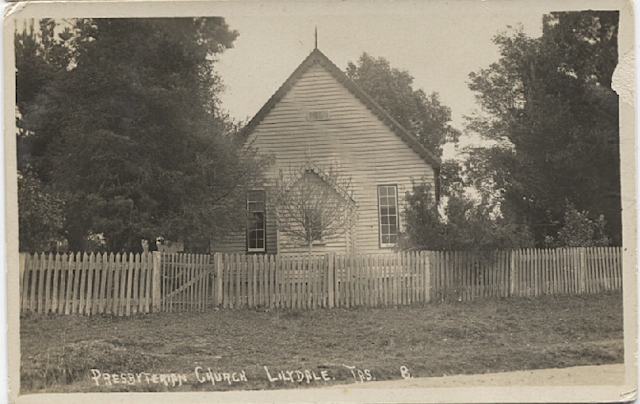 Lilydale’s Presbyterian church was the first church at what was once Upper Pipers River. It was built as the Union Church to be shared by Presbyterians, Wesleyans and Independents. It opened in 1880 following the work of a committee formed for the task of establishing a place of worship for the town. The chairman of the committee, John Somerville, was the son of Reverend John Somerville, the minister of the Kirklands Presbyterian Church. The land was donated by Ludwig Bardenhagen. The first minister was Reverend Mather of Scottsdale. Emily Killworth, daughter of Mr and Mrs John Wilson, early pioneers of the district, wrote that it was Reverend Mather’s wife who was responsible for Upper Pipers River being renamed Lilydale: “It was Mrs Mather, wife of Rev. Mather… who was stationed in the district, who gave Upper Pipers River (as it was then called) the name of Lilydale. When Mr and Mrs Mather came to live in the district the roads and hillsides were covered with sags which have thos
Post a Comment
Read more

No. 221 - The former Evangelical Presbyterian Church at Youngtown 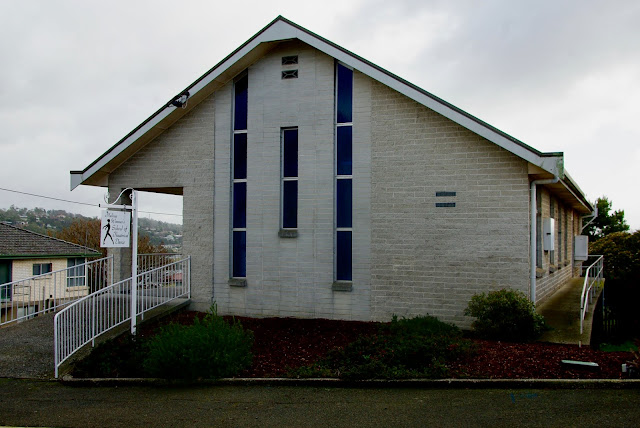 The Evangelical Presbyterian Church was established in 1961. It is a small denomination with representation in Tasmania, Queensland and New South Wales. The church was founded in Tasmania and the ordination of its first ministers took place in Launceston: “The historical scene was then set for the actual birth of the EPC. It took place on Thursday evening, the 28th. September, 1961, in "Chalmers Hall", Frederick Street, Launceston. This in many ways was most appropriate, for Chalmers Church was the original Free Church in Launceston”. The Evangelical Presbyterian Church has had several congregations in Tasmania including Hobart, Taranna, Penguin and Winnaleah. The Launceston congregation has relocated to Newstead and the former church building has recently been used as a dance school. Information about the Evangelical Presbyterian Church can be found at this LINK . Photograph: Duncan Grant 2018 Photograph: Duncan Grant 2018 Source https://www.
Post a Comment
Read more

No. 220 - The former Baptist Tabernacle at Devonport - 'Billiard Room Baptists' 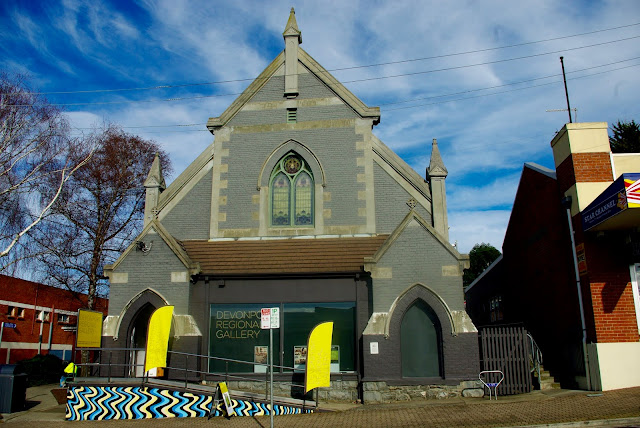 In April 1904, the North Western Advocate reported on the opening of a new Baptist Tabernacle at Devonport: “The opening of the new brick church erected by the Devonport Baptists was celebrated yesterday… The architectural beauty of the new building is most marked, completely dwarfing the wooden hall alongside that has for some years done duty for a church, until increasing congregations demanded a larger building” . The wooden hall referred to was the old “Protestant Hall” built by Mr T. P. Cowle which the Baptists had purchased in April 1889. Prior to this, the Baptists had used a billiard hall which opened in 1887. The Daily Telegraph described these premises: “Mr W.G. Buck… has now completed his billiard room and haircutting saloon… The building is of brick… The billiard room is now being used on Sundays as a place of worship. Pastor Blackie, under the Union of Baptists of Tasmania, holds services every Sunday at 3 p.m. I wonder if any of the naughty youths, in looking at the billi
Post a Comment
Read more 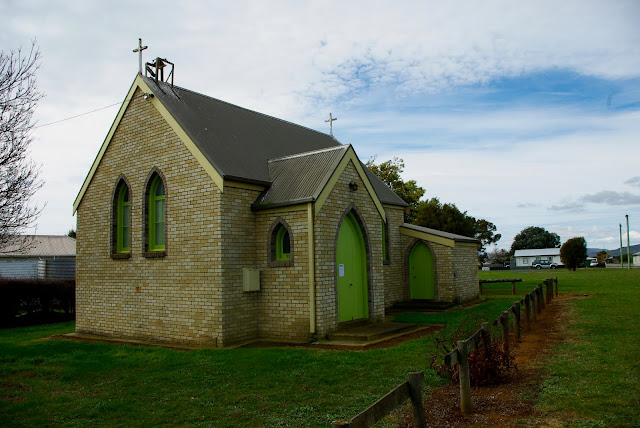 The first description of St Oswald’s Anglican church at Tunbridge is found in a 1905 report from the Hobart Mercury’s “Travelling Correspondent”. By this time, the old coaching town had already passed its heyday: “From a visitor’s point of view there is very little of an interesting nature to see in this small town, which is 10 miles south of Ross. The Blackman’s River runs between the settlement and the railway station, and in the summer time abounds with fish… Since my last visit the local adherents of the Church of England have erected a pretty church opposite the Town-hall, at a cost of £260. They were engaged for about four years in raising the required amount, which was obtained through the medium of a couple of fairs, two or three concerts, and voluntary contributions. The site on which the church stands was the gift of Mr. W. Scurr, an old resident of the township. The building was erected by Mr. W. Hepworth, and will hold a congregation of about 150. The interior is beaut
4 comments
Read more

No. 218 - The former Salvation Army 'Citadel' at Invermay 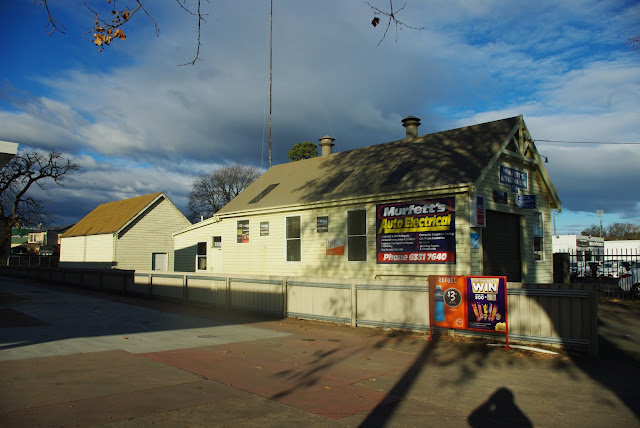 An auto-electrician’s workshop on Invermay Road in Launceston is probably the last place one would expect to be associated with a ‘church’. Wise’s Street Directory however confirms that the workshop was originally a Salvation Army Citadel. A search of Trove reveals that the Citadel opened on Saturday 14 December 1912. A further search of Trove revealed another surprise. In September 1947, a “Young People’s Hall” was erected behind the citadel. This building had previously been a Salvation Army centre at Chudleigh in 1889, which was dismantled and re-erected at Invermay. The Chudleigh hall is still behind the old Salvation Army Citadel although new weatherboards have been fitted on most of the building, covering nearly all of the original windows. A final point of interest is that the original Invermay ‘citadel’ is remarkably similar in appearance to the old Salvation Army Citadel at Lilydale (erected in 1915), which may indicate that the Salvation Army probably produced at least t
1 comment
Read more

No. 217 - The Wesleyan-Methodist Church at Sassafras - 'On Raising Children and Appreciating Womankind' 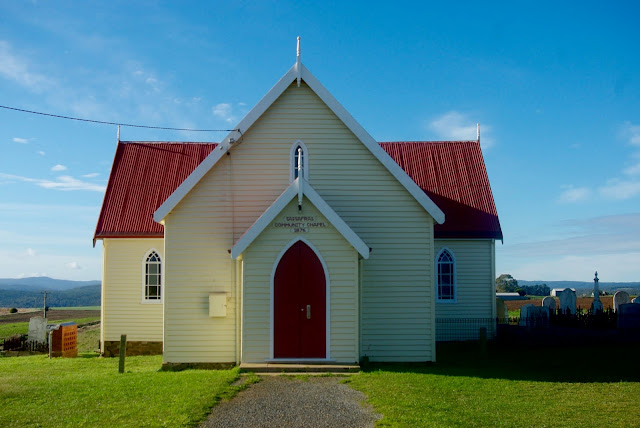 In an interview published in The Advocate in 1935, 83 year old Mrs Mary Shadbolt, a pioneer of Sassafras, recalled the early years of the Wesleyan Methodist church: “We lived at Sassafras a few years before a religious service of any kind was held. The first was in the kitchen of Mr. George Rockcliff’s home (“Springfield”). It was conducted by Mr. Pullen… The first regular service was conducted in Mr. Henry Rockcliff’s kitchen at “Skelbrook,” by a man known locally as “Big Wilson.” The kitchen at that time was a working man’s camp. It was years after that the Rockliff family came to Sassafras to reside. The Wesleyan minister from Torquay occasionally visited Sassafras. In those days the home of Mr. George Rockcliff was the minister’s haven. The journey to and fro was too much to be accomplished in one day, and preachers were not even supplied with a horse, and stipends were very small. Later, Mr. Henry Rockcliff built what is now the Baptist Church [1865], and loaned it to the Meth
Post a Comment
Read more
More posts