Showing posts from June, 2022
Show All 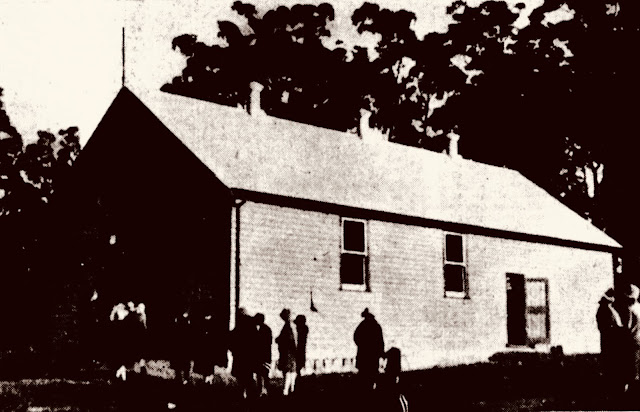 Crabtree is a rural settlement in the local government area of the Huon Valley and is situated about 15 kilometres north of Huonville. It was once an important timber and orchard-growing district. The settlement is named after the Crabtree Rivulet and the abundant crab apple trees that grew in the valley. Crabtree had only two places of worship; a Salvation Army hall which was built in 1917 and an Anglican church hall which opened in 1929. Crabtree’s Anglican church was designed as a community hall and a place of worship. The building, which was built by Mr James Lucas, used sliding doors to screen off one end of the main hall in which the pulpit and other church furnishings were located. Land for the church was donated by Mr Charles Parsons. On Sunday 14 July 1929, the newly completed church hall was dedicated to St David. The Huon Times published a report on the occasion: “On Sunday, last the dedication of the new church hall, recently erected at Crabtree, was celebrated by his Lords
2 comments
Read more

Scottsdale is the largest town in north-east Tasmania. It is named after the Government Surveyor, James Scott, who explored the region in the 1850’s. Scottsdale's first Catholic church opened in 1886 and was consecrated in the following year. In 1909 the building was moved to a new site to the north of the town. St Patrick's was reopened and rededicated on 30 January 1910. In 1978 the church was demolished and replaced by the “Log Cabin” church which opened in the same year. The altar and other items from the old church were moved to the new building. The new church was opened by archbishop Guilford Young on 10 December 1978. The unique church was constructed of locally grown pine and built with volunteer labour. In December 1992 disaster struck when Advent candles accidentally left alight resulted in a fire that engulfed and destroyed the building. Mass was held in Scottsdale’s C.W.A. Hall until the present church was built and opened in September 1994. St Patrick's Cat
Post a Comment
Read more 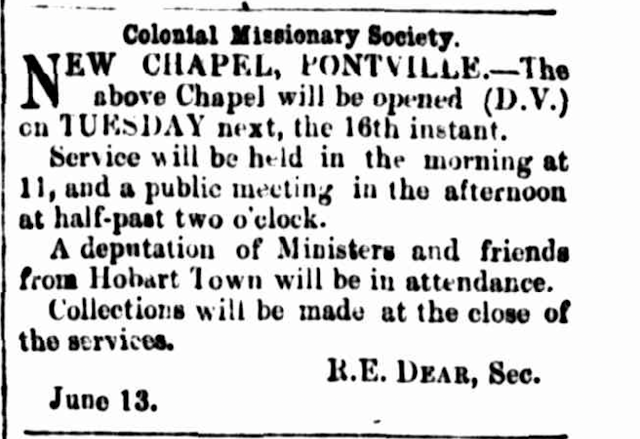 Pontville’s origins date back to 1821 when Governor Macquarie selected a site on the Jordan River as the location for a military barracks. The origin of the name Pontville is unclear but it literally translates from the French as 'bridge town’. The village of Pontville was officially established in 1838. The earliest Congregational services at Pontville were held at the local courthouse. They were led by Reverend Joseph Beazley, who had been appointed by the Colonial Missionary Society as minister at nearby Green Ponds (Kempton) . In 1857 a small stone chapel was built above the banks of the River Jordan. It was located next to the old Congregational cemetery which was established in 1854. The chapel officially opened on Tuesday 16 June 1857. No description or image of the building is known to exist. In early 1874 the foundations of the church began to subside making the building unsafe. The church’s trustees decided to build a new church on a site on the opposite bank of the
Post a Comment
Read more 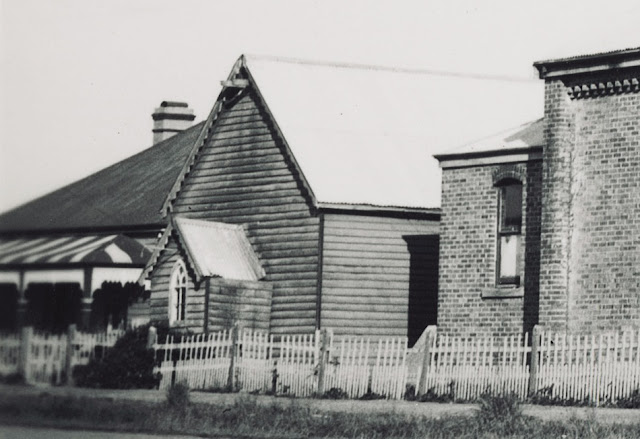 Latrobe is a large country town situated between the Bass Highway and the River Mersey. The first dwelling was built in 1836 and land sales took place some 20 years later. The settlement was named after Charles LaTrobe, who acted as Lieutenant-Governor of Tasmania in 1846-7. Latrobe was once an important port town with boats operating from Bells Parade until the River Mersey silted up. Congregationalists were active in the North West since the late 1840s. By the late 1870s churches had been built at Forth, Don River, Devonport and Ulverstone. In March 1877, the Congregational Union received a letter “from several persons at Latrobe expressing the wish that a Congregational church might be established there”. By August 1887 plans for a brick church were well underway and architect Harry Conway was engaged. The Tasmanian reported: “Rev. M.W. Bradney,… held a sort of initiatory service, which was attended by about 120 persons. After the service a committee formed. A piece of ground betw
Post a Comment
Read more 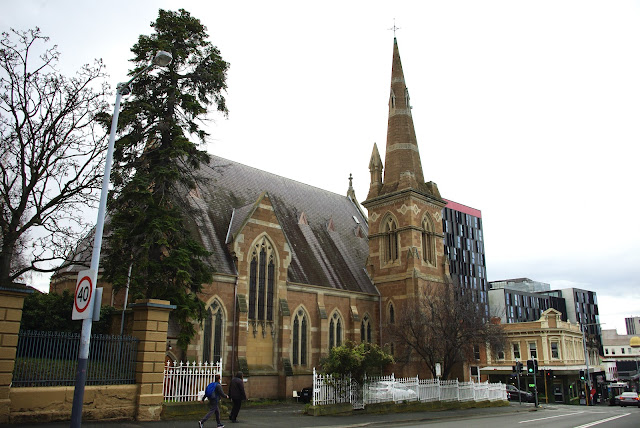 Hobart’s former Memorial Congregational Church, situated at the corner of Brisbane and Elizabeth Streets, was constructed in 1870 to replace an earlier church built in 1832. [ see No. 1081 ] It was named the ‘Memorial Church’ to commemorate the introduction of Congregationalism to Tasmania. In 1830, Reverend Frederick Miller, Australia’s first Congregational minister arrived in Hobart. Miller’s recruitment from Britain was the result of financial assistance provided by Henry Hopkins, a prominent local businessman. Fifty years after after Miller’s arrival in Hobart, a memorial foundation stone for the new church was ceremonially laid by Henry Hopkins on 16 August 1870. The date coincided with Henry Hopkins’ 83rd birthday. Two years later the church was completed and was officially opened on Thursday 7 November 1872. In the week before the church opened, the Hobart Mercury published an article outlining the events leading to the church’s construction: “When the subject [of the need of
Post a Comment
Read more 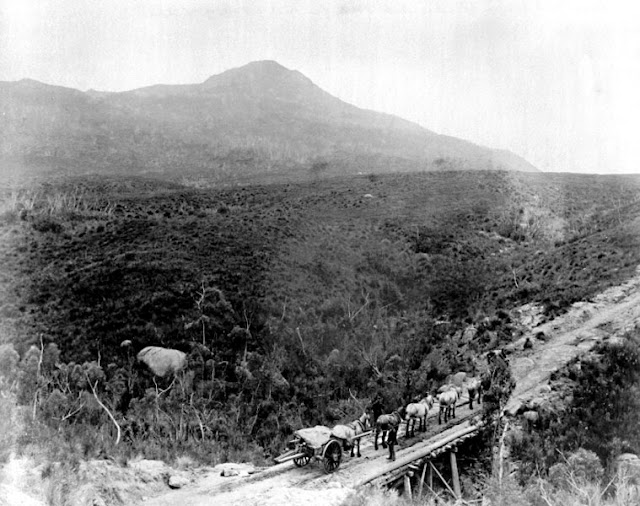 Trial Harbour is small coastal community on Tasmania’s West Coast. Trial Harbour once served as a port for Zeehan, providing an important function in the development of the mining industry in the region. Originally called ‘Remine’, the settlement was renamed Trial Harbour in 1881. Situated approximately 5 kilometres east of Trial Harbour was the short-lived “Orient Mine”, which has the distinction of being the site of the first church built on the West Coast. The Orient Mine was established in 1881 to extract tin from the Heemskirk tin fields in the vicinity of Mount Agnew. By the mid 1880s the mine had failed and was abandoned. The mine was later incorporated into the more successful Mayne’s Mine in 1902. A traveller who passed through the area in 1888 described the defunct settlement around the abandoned Orient mine: “When passing Mount Agnew we saw the now abandoned Orient tin mine, a standing record of a shareholders’ money wasted and labour lost. The huts and workings are still
Post a Comment
Read more 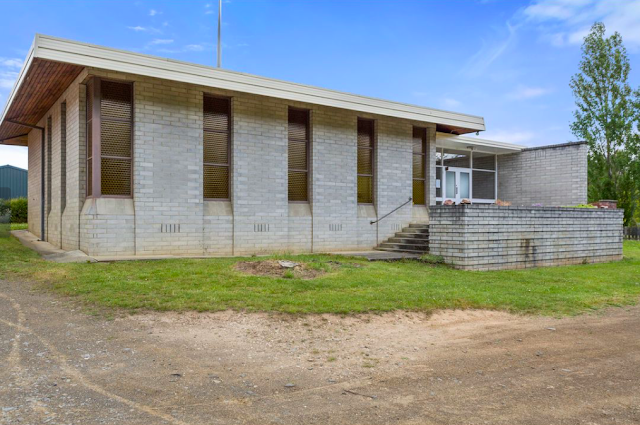 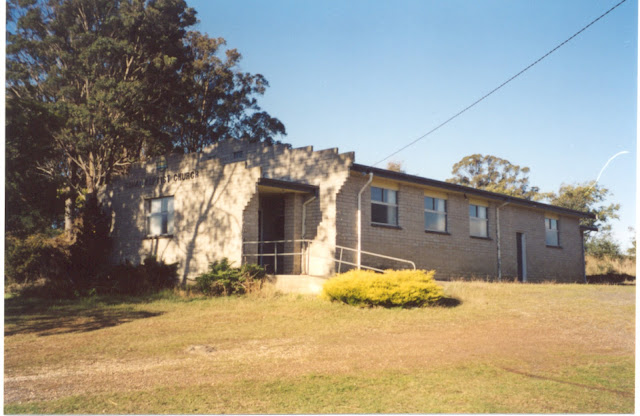 Cluan is a small settlement in Northern Tasmania approximately 5 kilometres south of Westbury. The name Cluan is probably derived from the Irish ‘cluain’, meaning ‘meadow’. The former Baptist church at Cluan is located at the intersection of Glenore and Claun Roads. It is a cement brick structure built in 1975. It replaced a weatherboard church which opened in 1906. The church closed late 90s and the property sold and converted into a house.
Post a Comment
Read more 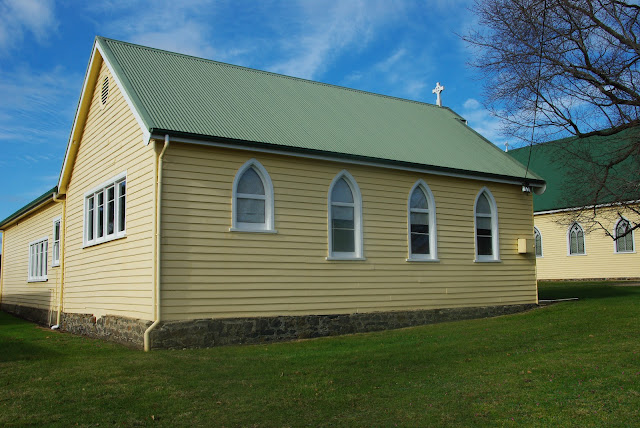 This entry is another in a series of articles about buildings associated with some of Tasmania’s most significant churches. These buildings include Sunday schools, parish halls, convents, schools and residences of the clergy. Ancillary buildings are often overlooked and are rarely featured in published histories. My aim is to create a basic record of some of the most significant of these buildings, including those which no longer exist. Before its establishment in 1890, Devonport was preceded by two townships on either side of the Mersey River; Torquay on the east bank and Formby on the western side. St Paul’s Anglican church opened in 1879, replacing an earlier ‘church-school’ built in 1863. After 1879 this building was used as a Sunday school hall until 1897 when it was blown down in a gale. The Sunday school hall was not replaced until 1902. The hall was opened on Wednesday 15 January and a report in the North Western Advocate and the Emu Bay Times describes the official opening of
Post a Comment
Read more 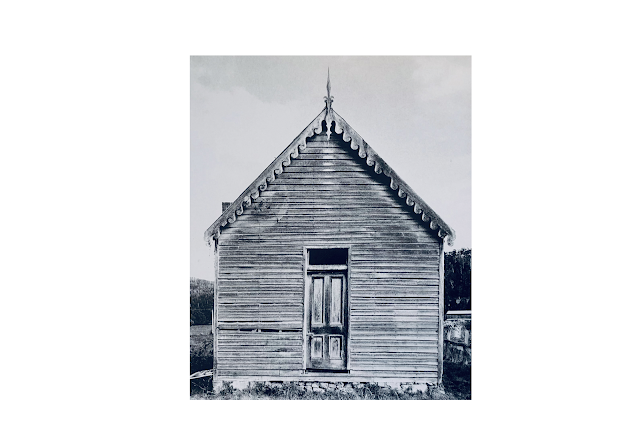 Gardners Bay is rural community approximately 8 kilometres south of Cygnet on the Woodbridge Hill Road. The settlement takes its name from the bay south of Cygnet. Little is known about the Gardners Bay Methodist church. According to Max Stansell in Tasmanian Methodism: “Church-work began …very early but was discontinued in the year 1879. It was revived during the 1890s and a chapel was built in 1893…”. A record of the church’s opening, which took place on Thursday 28 September 1893, was published in the Hobart Mercury: “The opening of the new Wesleyan Church took place here on September 28. There was a crowded attendance, showing the great interest taken in the event by the people in the district. The building, which supplies a long felt want in the locality, is a wooden structure of pretty design, and substantially built, having sitting accommodation for 100 people. The celebration took the form of a sacred concert, followed by a coffee supper….At the conclusion the Rev. A. T. Holden
Post a Comment
Read more 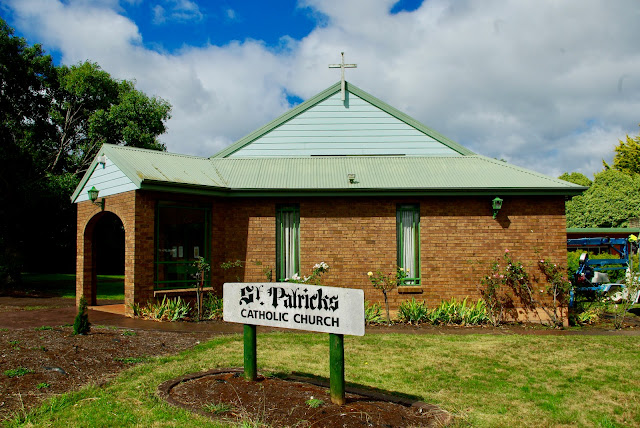 Scottsdale is the largest town in north-east Tasmania. It is named after the Government Surveyor, James Scott, who explored the region in the 1850’s.  Scottsdale's first Catholic church opened in 1886 and was  consecrated in the following year.  In 1909 the building was moved to a new site to the north of the town.  St Patrick's was reopened and rededicated on 30 January 1910. In 1978 the church was demolished and replaced by the “Log Cabin” church which opened in the same year. The altar and other items from the old church were moved to the new building. In December 1992 disaster struck when Advent candles accidentally left alight resulted in a fire that engulfed and destroyed the building. Mass was held in Scottsdale’s C.W.A. Hall until the present church was built and opened in September 1994.  The original altar and other historical items were destroyed in the fire but these were replaced from other Catholic churches from across  north east Tasmania which had been closed. S
Post a Comment
Read more 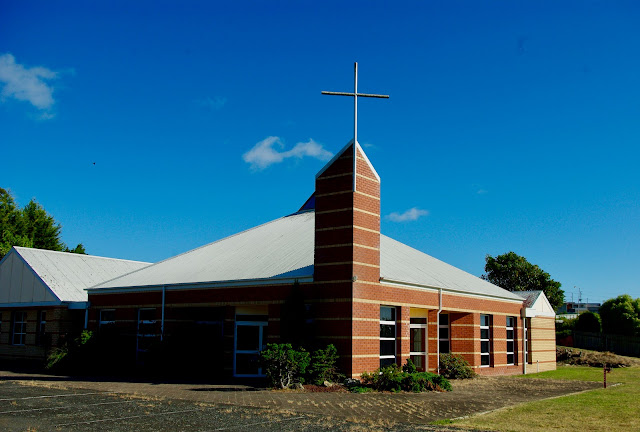 The Seventh-Day Adventist Church was established in Tasmania in 1888. The denomination originated in the USA in the 1860s and as early as 1885 a group of Adventists travelled to Australia and began preaching in Melbourne. Following the establishment of a church in Melbourne in 1886 the group moved on to Sydney, Adelaide and Hobart. Public tent meetings were held in Sandy Bay in 1888 which led to the establishment of a church at Collinsvale and later at Hobart and at Launceston. The first Adventist church at Ulverstone was formed in 1959. A church was built on Queen Street in West Ulverstone which remained in use until 1989 when the last service was held in June of that year. A new church was built on South Road in West Ulverstone which remains active. The old church was converted into a gymnasium in the early 1990s. Sources: https://ulverstone.adventist.org.au http://www.utas.edu.au/library/companion_to_tasmanian_history/S/Seventh.htm
Post a Comment
Read more 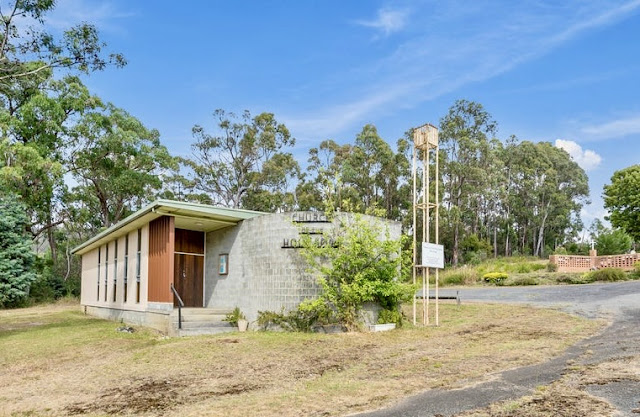 Kettering is a small town on the Channel Highway, approximately 35 kilometres south of Hobart. It was originally named Little Oyster Cove before being renamed after Kettering in England. The church at Kettering has been shared by three denominations: Anglican; Catholic and the Uniting Church. It was built in 1969, replacing a Union church that was destroyed in bushfires two years earlier. The church is no longer used and is currently up for sale. All the photographs used in this article are courtesy of Elders Real Estate, Margate.   \
Post a Comment
Read more 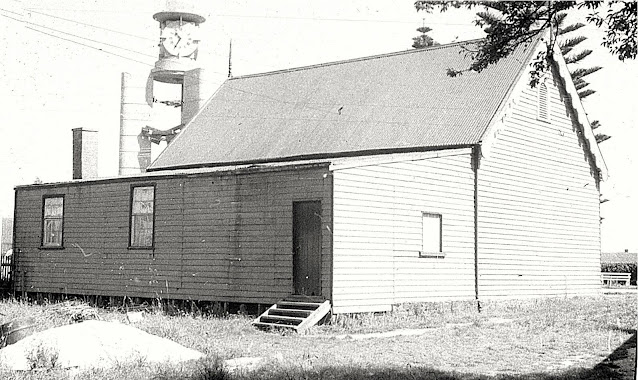 Ulverstone was permanently settled by Europeans in the late 1840s after Andrew Risby developed farmland out of the thickly forested wilderness. During the 1850s the district received new settlers and was frequented by transient timber splitters. In 1854 Hugh Ross McKay opened the first store and the Leven Post Office opened in 1857. The Baptist were the last of the major denominations to establish themselves at Ulverstone. On Sunday 24 September 1905 the first Baptist service was held in Ulverstone Oddfellows' Hall. Following the first service a local church was formed for the Penguin and Ulverstone area. In August of the following year the Baptist community at Penguin separated to form their own church. The Ulverstone community purchased a block of land on King Edward Street to build a church however this never eventuated as a new opportunity arose. The Ulverstone Congregational church on Alexandra Road (built 1877) had been used by the local Presbyterian community since the 1890s
Post a Comment
Read more
More posts