No. 51 - Hagley Presbyterian Church - Built with Bricks of a Brewery

- January 30, 2018
Presbyterian services were held in Hagley as early as 1853. Services were held in a Methodist Chapel and also at the old Anglican (Church of England) Church which was eventually purchased by the Presbyterians in the 1870’s. This was the same chapel that had served as Hagley’s first school from 1855. There seemed to be some symbiosis in this arrangement:

"As the school was held in the church, services such as marriages caused breaks in the school time table - breaks that were appreciated by the scholars.” (Examiner )

With the needs of a growing congregation, the old Anglican Church was demolished and a new brick building was constructed. The bricks used to build the new church came from a demolished brewery, probably from Longford. It was opened in December 1879.  During the period of construction, the Presbyterians once shared the Methodist Church, which was a community with which they had a long standing good relationship.

Like so many rural churches, the Presbyterians suffered a gradual decline in number in the second half of the 20th century. By the 1970’s the congregation had shrunk to the point where the church was no longer viable. The building was subsequently sold and is now a private residence. The congregation was largely absorbed by the Methodist (Uniting) Church in Hagley, which will be the subject of another blog entry. 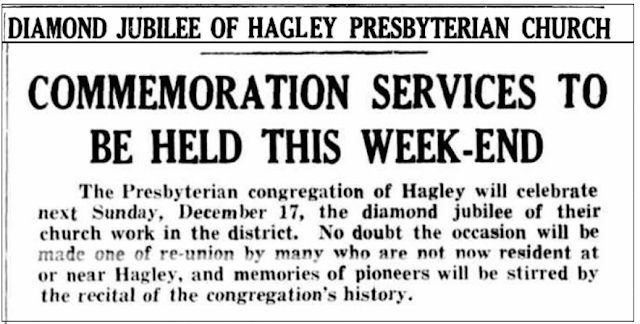 Scott, E.G. (1985). Hagley (A Short history of the early days of the Village and district with notes on the pioneer families)

von Stieglitz, K.R. (1946). Then and now in old Westbury (with notes on Exton, Hagley and Carrick)