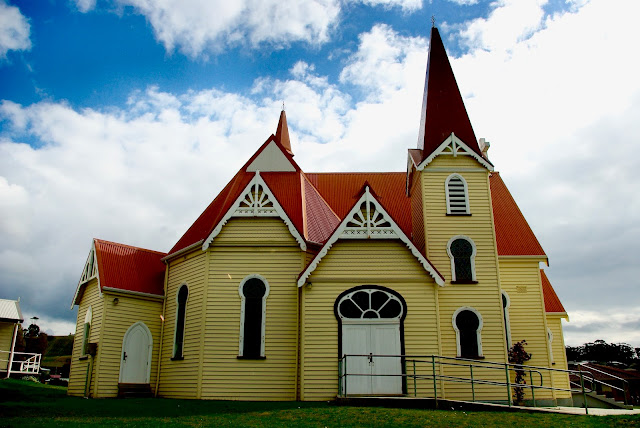 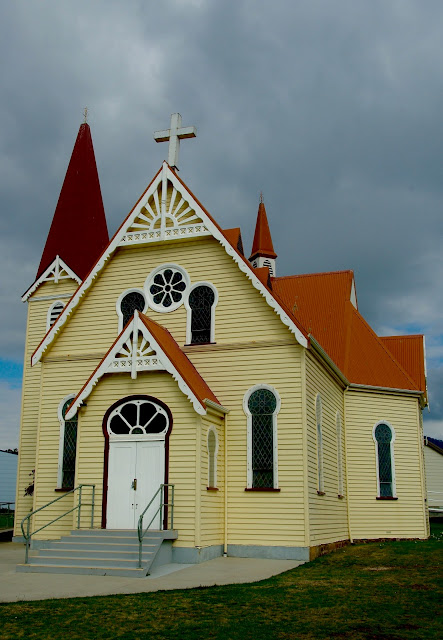 Opened on the 10th May 1903
Representative example of a ‘Federation Carpenter Gothic’ church
ABOUT THE CHURCH
The Penguin Uniting Church is a landmark, overlooking the beach and Bass Strait beyond, and stands as a witness to the faith of the people and a sign of hope for the community.
The building represents an exotic variant of the “Federation Carpenter Gothic’ style, displaying Eastern European influences, namely keyhole windows, and scalloped and horseshoe arches. The floor plan, excluding the vestries, has the keyhole configuration as well.
Architecturally the building represents an innovative variation of nineteenth century church design and the use of decorative timber elements marks a considerable technical achievement.
FEDERATION-refers to the architectural style in Australia, predominantly in the federation period c.1890-c.1915. The period refers to the federation of Australia on 1st January 1901, when the Australian colonies collectively became the Commonwealth of Australia.
CARPENTER GOTHIC- North American architectural style in the late 19th century. These structures adapted Gothic elements such as pointed arches, steep gables and towers. It is characterised by its profusion of jig-sawn details, whose craftsmen-designers were freed to experiment with elaborate forms by the invention of the steam powered scroll saw. A common but not necessary feature is board and batten siding.
FOUNDATION STONES- There are 8 foundation stones, laid on the 20th August 1902. Donations of 10 pounds were made by a number of members and their names were perpetuated in the foundation stones. Rev. W.H.Bowe laid the fifth stone but before doing so deposited a tin containing ‘the usual mementoes’. Today there is only one stone showing, this is on the North Western corner. The others were covered because they were deteriorating with the weather.
HISTORY-As the settlement on the North West coast developed, Primitive Methodist services commenced in the Penguin Creek area in the early 1860s. Services were conducted at first, by laymen, and then occasionally by Rev.W.H.Walton stationed at Longford, 1865-66. In April 1867 Rev. Walton had been appointed to what was then called The North West Coast Mission and resided at Penguin, its headquarters. The primitive Methodist community erected a small split timber Church on land donated by Mr Lewis Grant of Don (Tas.) The building was opened on 14th January 1866.
Following the amalgamation of the Primitive Methodists and United Free Methodist congregations in 1901, a larger building was required, and construction of the present building was commenced. The earlier structure was shifted to the rear, but as since been destroyed by fire.
The architect of the new building was Mr. J.Macfarlane of Melbourne, and the contract was awarded to Mr.F.Steven for the sum of 645 pounds. The building ran into financial difficulties and completion of the project was delayed . The Church was opened on 10th May 1903 with the final cost of 1100 pounds.
The square tower contains the staircase to the upper seating area. The square spire is approximately 16 metres high. The external walls are bullnosed weatherboards and the window sills are made of Huon Pine. The building consists of an octagonal congregational auditorium with planned seating for approximately 400 downstairs and 100 upstairs.
Local timbers have been used inside eg. blackwood, celery top pine, and Tasmanian Oak. The walls contain a diagonally panelled timber dado with reeded dado rail. Hardwood is used elsewhere within the internal linings including the ceiling.