- January 13, 2018
This striking Launceston building is now know as Milton Hall. It started its life as a Congregational Church in 1842 and has in its history served as a public hall, a school and is now a church hall adjoining Christ Church Baptist Church.

The former St John’s Square Church (now Prince's Square) is intimately linked to the life of John West, one of Launceston's most preeminent citizens. West’s obituary in the Examiner in 1873 gives a succinct summary of his life and achievements:

“Mr West arrived here some five-and-thirty years ago, and after a brief missionary career in the Northern rural districts, he was invited to form a second Congregational Church in Launceston. A wooden building, purchased and removed to a site in Frederick-street, …was converted into a chapel, and here for a few years he officiated as pastor with great acceptance; until the congregation increasing in numbers rendered it necessary to procure a larger chapel, and the one fronting on Prince's Square was erected. Mr West took a lively interest and an active part in everything calculated to promote the welfare of the community, whether in the pulpit, on the platform, or with his pen. He was one of the founders of the Launceston Mechanics' Institute and Benevolent Society, and one of the earliest and most valued contributors to the columns of this journal (The Examiner). It was at his suggestion that the Australasian League was formed, which was instrumental in procuring the cessation of transportation to the Australian Colonies, and in obtaining for them the advantages of self-government. All these and other services which he rendered may have been forgotten, but his "History of Tasmania," published in 1852… From his great skill and tact as a political writer Mr West was repeatedly urged by the proprietors of the Sydney Morning Herald to become its editor; and after taking counsel with his people and brethren in the ministry he ultimately acceded and undertook the duties of that office about twenty years ago and continued to discharge them until his death”.

A report in the Launceston Courier describes the laying of the foundation stone of West’s new church in 1841. It is worth a read for its droll observation about the problem of theft in the community:

“The ceremony of laying the foundation stone of a new Independent Chapel in the Church Square, took place on Thursday afternoon. A large concourse of people assembled on the occasion and after singing a variety of hymns, they were addressed by the Rev. Mr West, who commented in a most appropriate manner upon the ceremony they were performing, and entered into a brief exposition of the tenets and … An inscription commemorative of the event was enclosed in a bottle and deposited under the foundation stone. It was announced for the especial information of those who might, through the depression of the times, be stimulated to follow the example of the depredators who purloined the coins placed under the foundation stone or the New Norfolk College, that the bottle, besides the inscription, contained only a solitary four-penny piece.”

Be warned, if you are short of cash, only expect to find Fourpence under the Milton Hall for your efforts.

The building also has a connection with some of Launceston's educational institutions. It served as the premises of Launceston High School in 1885 which was established by Edward Alleyne Nathan. This was later absorbed into Church Grammar in 1912 but it continued as a school between 1913 and 1916 when Milton Hall served as one of the campuses of the new Launceston State High School (Launceston College), before the present building in Paterson Street was completed in 1916. 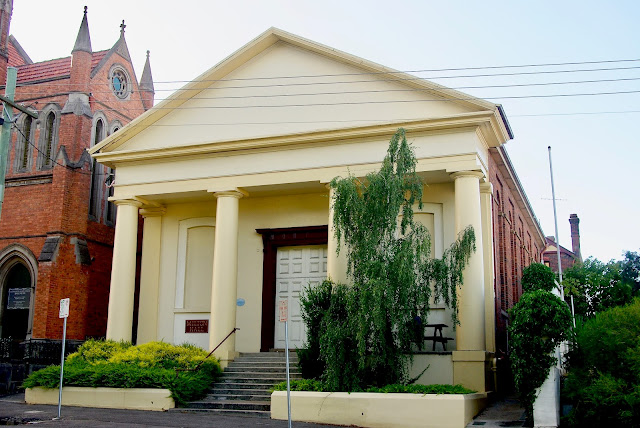