- February 22, 2018
The Chapel on the Pateena Road (sometimes called the Salem Chapel) between Launceston and Longford is a bit of a mystery. I have found a few tantalising details and hope to add to this entry once more information comes to hand.

The Pateena Road area was once known as Muddy Plains. According to the local historian Karl Von Stieglitz, it was so named because of the state of the road: “Wagons were often two days making the journey from Longford and cases are reported of horses sinking up to their bellies in the mud and vehicles abandoned for days in the mud”.(1) It was also known as Norfolk Plains East and is said have been renamed Pateena after the children of Edward Dumaresq of ‘Mount Ireh Estate’ had travelled on the SS Pateena for schooling across Bass Strait in Melbourne.(2) The area was originally settled by Norfolk Islanders who received land grants along this part of the South Esk River.

The chapel was built in 1840 and was part of the Methodist circuit which included churches at Liffey, Perth and Cressy. It was also used by visiting Church of England ministers on occasion. It seems that it did not operate as a church for long and was for a time used as a schoolroom before the Muddy Plains schoolhouse was built in the 1880's.

Its demise appears to be linked to an early land dispute. According to the 'Norfolk Plains Family History', “a group of Trustees had raised money to erect a chapel. James Jordan sold one acre of land to the Trustees of the Wesleyan Church (Messrs. G P Ball, J W Gleadow, H Reed, W McDowell, Thomas Bartley, P Oakden, C Chilcott and W Mason) for the sum of £20. The Minister of the church was William Simpson. After a dispute between James Jordan Snr and the Trustee regarding the burial of James' grandson, access was refused by James, as he still owned the surrounding land and could prevent people attending the church - so services ceased. The chapel then was used as a barn and a school”.(3)

It therefore appears to have had a very short life as a chapel yet remarkably the building has survived almost in its original form.

The chapel is now a private residence and appears to have been rented as holiday accommodation until recent times. 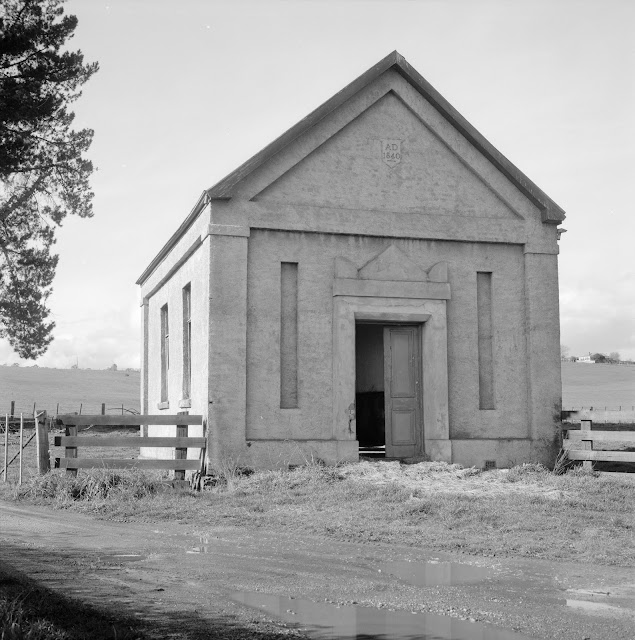