- March 30, 2018
The story of the Catholic Church at Newstead began with the purchase of land in Kenyon Street as a site to replace St Columba’s School at Sandhill which had burnt down in in 1932. This was intended to be the site for a new church and school in Newstead. The steepness of this site however made it unsuitable and this was then sold in order to acquire land on Abbot Street. The design of the church originally planned for Kenyon Street can be seen at the bottom of the page.

St Thomas More’s Church was opened at the Abbot Street site on 14 March 1937. In 1938 the Sisters of St Joseph opened a school alongside the church with an enrolment of fifteen students. Sister Mary Camillus was the first principal. The Examiner reported on the opening of the new church:

“Modern in every way, the new Roman Catholic Church at the corner of Abbott and Campbell Streets, was blessed and opened yesterday afternoon by Monsignor Monaghan in the presence of a large attendance of parishioners. The building has been given the name of the Church of St.Thomas More, and is an important asset to the Catholic community of Newstead who have previously worshipped at the Church of the Apostles. The ceremonies began with a procession of blessing around the building, led by altar boys, the leader of whom carried the crucifix. Members of the Hibernian Society in regalia and of the St. Vincent de Paul Society formed a guard of honour. After the church foundations had been blessed, the procession moved indoors for a similar ceremony…”

The report went on to outline how the church had been established:

“Father Upton explained that originally the idea was to build a wooden church with the intention of using it as a hall later, when a better church would be constructed. But it was found that the cost of building in wood would be so high that it was decided to have the work done in brick”.

“Monsignor Monaghan explained concerning the name of the building that the church was under the patronage of one of the latest saints on the calendar, the great chancellor of the reign of Henry VIII, St. Thomas More, who would watch over the parishioners and pray for them. The speaker considered that it was the first church in the Commonwealth dedicated to that great saint”.

The St Thomas More’s church was replaced by a larger modern building, Sacred Heart Church, that was opened by Archbishop Young on 6 December 1970. The old church is still present on the grounds of St Thomas More Primary School and alongside the Emmanuel Centre, which was also established by the Sisters of St Joseph.

A note on Saint Thomas More

Pope Pius XI canonised More in 1935 as a martyr. Pope John Paul II in 2000 declared him the "heavenly Patron of Statesmen and Politicians". Since 1980, the Church of England has remembered More liturgically as a Reformation martyr. The Soviet Union honoured him for the purportedly communist attitude toward property rights expressed in his book Utopia. 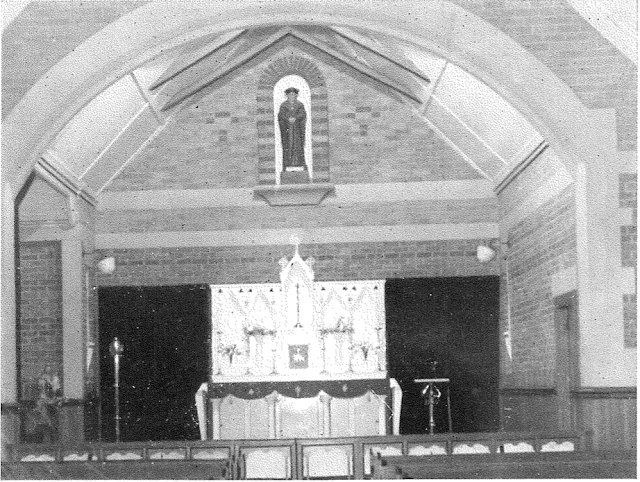 The altar with St Thomas More above - source: Parish booklet 1958