- April 20, 2018
The first Anglican church at Forth opened in 1868. It was originally situated on the road to Leith but in 1893 it was moved closer to the village of Forth. The old cemetery where the church was once situated still exists. (This is described at the end of this entry.)

In 1933, this old church from Leith road was destroyed in a fire. A report in The Advocate described the event:

“All Saint's Church of England was completely destroyed by fire about 4 o’clock on Tuesday afternoon. The origin of the outbreak is a mystery, but it is thought that it commenced in the vestry as the result of a short circuit in the electric wires. Mr Onions, who was working at his home nearby, first noticed smoke coming from under the roof of the building, and gave the alarm. With the assistance of other residents the door of the church was burst open, but all that could be saved were five pews and four kneelers…. It was impossible to save the building owing to a lack of water”. (Advocate Thursday 27 April 1933)

The Forth community rallied together and a new church was built and reopened by 1936. The opening ceremony on 24 March 1936 was reported in The Advocate:

“It was an impressive ceremony, and a large crowd from various parts of the Leven and Devonport municipalities was present…. Major R.E. Smith, an old resident of Forth, whose family has been associated with the church almost from its inception… [unveiled the commemoration tablet]…He removed several nails with a small figured blackwood hammer, and as the Union Jack fell aside it revealed the handsome commemoration stone of polished Tasmanian red granite”. (Advocate Wednesday 25 March 1936)

“Forth was the main centre for many years and had done wonderful work in “civilising” the North-West Coast. Forth had not gone back; it had simply stood still while other centres advanced….” (Advocate Wednesday 25 March 1936)

The church was designed by Richard Booth, who had also supervised its construction. According to Booth:

“The church was built on the same principle as the Elizabethan cottages in England, and was of real English design”.  (Advocate Wednesday 25 March 1936)

The Advocate described the building as:

“Built on the Elizabethan principle, half of it being timber. For a distance of 4 feet up the exterior walls there is weatherboard; while the top portion is constructed of fibrolite sheets. The main church building is 45ft x 20ft; while the vestry is 10 x 9 feet, and the baptistery and bell tower is 8 x 8 feet. There is a dado of three ply inside the building, and the remainder of the walls is constructed of fibrous plaster. The leadlight in the eastern windows give a very pleasing effect; while the remainder of the windows are of white Arctic glass. …The commemoration tablet is a handsome slab of polished Tasmanian red granite from Cole’s Bay, and was presented to the church by the company which is exporting granite from the quarries at Cole’s Bay to all parts of the mainland and New Zealand”. (Advocate Wednesday 25 March 1936)

This description of the church in 1936 is much the same as can be seen today, apart from the ‘modern’ addition on the west side of the building.

Bishop Hay conducted the dedication ceremony almost two weeks later on Sunday 3rd May. This too was reported in The Advocate. Speaking to the congregation Bishop Hay emphasised that the real significance of a church building was that it was a reminder of God:

“It is one of the greatest weaknesses and failings of human nature to forget Him, and we must have these buildings to remind us of Him…. Some erected tents in the desert to worship God, and it did not matter whether the building was humble or a cathedral – it carried the same significance to those who worshipped in it”. (Advocate Monday 4 May 1936)


It was also a reminder of England too. A little later in his sermon Hay remarked:

“Our church is the Mother Church of England, and the more we read the history of England the more closely we find that our church is associated with the development of a great Empire”. (Advocate Monday 4 May 1936)

Colonel Smith’s comments about ‘civilising the North West’ and Bishop Hay’s notion of Church and Empire might seem rather quaint if not outrageous from today’s perspective. But we should not judge them too harshly because we are all prisoners of our times. With place names such as Forth, Devon, Formby, Mersey and Leith, how can we forget that this place was once considered a little England?

The Old Church of England Cemetery

The old cemetery on the road to Leith is also the site of the original All Saint’s Church. It is now maintained by the Lion’s Club, which also maintains several other cemeteries in the Forth area. Perhaps this is a model for other regions?

The Lions have built a lichgate at the entrance to the cemetery that complements the beautiful wooded yard. The term ‘lich’ evolved from the Saxon word for corpse, and the lichgate was traditionally a place where corpse bearers carried the body of a deceased person and laid it on a communal bier. The priest would then carry out the first part of a burial ceremony under the shelter of the lichgate roof.

The cemetery has stones that remember some interesting people and and tell some tragic stories. I have decided to include six these here because they give an insight into life and death in a rural community in the late 19th Century. I have not reproduced all the details of some of these stories because they are confronting but I have provided the links to TROVE where they can be read. Newspapers did not spare a single detail on accidental deaths or suicides in those 'good old days'!

“Colonel James Robert Fulton, of Her Majesty's 53rd Regiment of Light Infantry in the Indian army, who only arrived at the Forth, some four or five weeks ago from Launceston, having just come from India on a visit to his family who have resided here about four years. He came home to die in the bosom of his friends, and after suffering for four weeks he gradually sank on Thursday night and was buried on Saturday last at the Episcopal burying ground, where the impressive service for the dead was read by the much esteemed minister the Rev. C. B Brome. The deceased was not only a brave man in the army, but a thorough Christian soldier of the Lord.  (The Cornwall Chronicle Wed 26 May 1875)

An inquest revealed that Lewis Giblin was working in a surveyors’ camp. He went to bathe in the Forth River but swept into the middle of the river and drowned. The inquest report is HERE.  A farmers wife (Mrs Field) drowned in the river 4 days later.

An unusual inscription on this headstone “A martyr for conscience sake” piqued my interested. Unfortunately the young man took his own life in the saddest of circumstances. I will not reproduce the details here because they are confronting but a link is HERE and HERE if you would like to know more. This letter gives some insight into the interests of the young man: LETTER HERE

Braddon was a former premier of Tasmania. He is also one of several people in the cemetery who have a connection with India. His life story is too detailed for this article but a link to the Australian Dictionary of biography may be found HERE.


PHOTOGRAPHS OF THE OLD CEMETERY 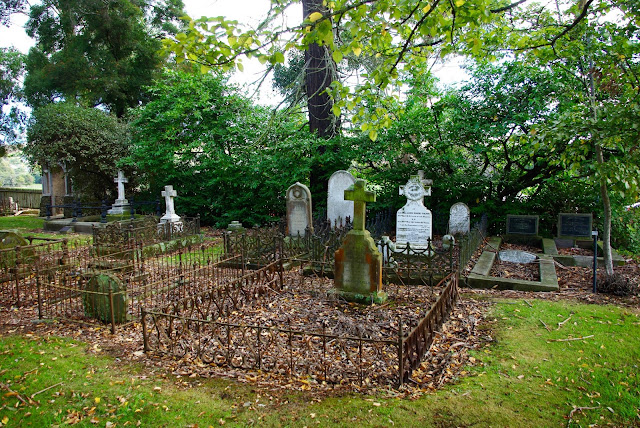 All Photographs of Headstones - Duncan Grant 2018