- April 24, 2018
Sacred Heart Church at Karoola was built in 1898.  However, it is not the first Catholic church at Karoola with an earlier building opening in 1868. This event was recorded in the Cornwall Chronicle:

“The Catholic church lately erected in the district of Piper’s River, about fifteen miles distant from Launceston, was solemnly opened on Wednesday last. The distance and the rough, unformed state of the road deterred many from being of the number of visitors who would otherwise gladly avail themselves of the occasion to enjoy the pleasure of an “outing”, to express their appreciation of the struggles made by the people of this rural district to erect a religious edifice where the most sacred rites of their religion will be performed…”

The Chronicle's reporter was clearly impressed by Father O’Callaghan's 'sermon':

“Seldom have the people been favoured by a discourse so simple – adapted to the understandings of an unlearned people – so persuasive for its clear, forcible and didactic style as delivered upon the occasion…”

And the same reporter was equally impressed by the luncheon that followed:

“The housekeepers determined to exhibit their hospitality to the several visitors, had a magnificent luncheon awaiting, prepared in the most tasteful style and in an abundance which would satisfy more than three times the number present. A people as generous in disposition as they are sincere and fervent in their religious convictions and piety, well merit so beautiful an edifice in the midst them”.

The “beautiful edifice” mentioned in the report is not the same beautiful edifice which may be seen today. The second church was opened in late 1898 with Archbishop Dr Murphy laying the foundation stone with the assistance of the Very Reverend Dean Beechinor of Launceston. Four years after Sacred Heart's opening, a convent was built alongside it to educate the children of the district. The convents's opening ceremony was reported in The Examiner in April 1902:

“The opening and blessing of a new convent at Karoola was conducted…by the Very Rev. Dean Beechinor… Several drags [coaches] and private vehicles left the city during the morning. In order to permit the attendance of those on board, the service was delayed until 11.30 at which hour Father O’Mahoney celebrated Mass. The building, which is considered to be one of the finest Catholic churches in the state outside of the cities, was crowded almost to excess…..Dean Beechinor …paid a high compliment to the teaching qualities of the Presentation Order….”

The convent was run by the Presentation Sisters with four nuns arriving in the district and a "substantial role of attendance had been guaranteed".

In 1920, the church and convent became the focus of the news across Tasmania for the strangest of reasons. A poster nailed onto the church door led to a libel case which reached the Tasmanian Supreme Court. The event almost seems like a parody of Luther’s Ninety-five Theses. The issue arose when Charles McCarthy was sued for libel for an amount of £150 by Joseph McKenna over an issue of donations for milk for the sisters of the convent. The Daily Telegraph outlined the origin conflict:

“The plaintiff was a farmer of Karoola….The libel as set out in the plaint was that a poster or notice posted by the defendant in a Roman Catholic Church in Karoola, which was asking for donations for milk funds for the Sisters of the Convent. Certain donations were acknowledged on one side, and on the other side of the notice was: “promised but not paid: R. J. McKenna, 2s 6d.”

McCarthy had been tasked with collecting donations for milk for the convent. Relations between McKenna and McCarthy had already been strained and now escalated almost to the point of violence, leading to the dispute being taken to the courts. Literally thousands of words were devoted to coverage of the case in newspapers across Tasmania. The disappearance of a key witness, Sister Gerrard, who had been subpoenaed to attend the trial, added to the drama. To cut a very long and complex story short, the plaintiff agreed to settle the case for a sum of £3. Perhaps this is the origin of the proverb ‘crying over spilt milk’. [links to newspaper reports on the case can be found at the bottom of the page]

Following this storm in a teacup, the church settled once more into the rhythms of country life.  But by the 1950’s, Sacred Heart was once again in the news; this time for happier reasons. In 1953, Archbishop Tweedy announced the purchase of land adjoining the church to provide accommodation for the Presentation Sisters. Archbishop Tweedy explained:

“For 50 years sisters of the order have lived in a building which was …not in any way suitable. Their new home will supply just a little comfort for them that the community of sisters has not hitherto enjoyed”.

The Sisters had in fact been living in accommodation that was constructed from the timber of the old church that had been demolished after 1898. At the convent’s 50th anniversary in 1952, the lives of these pioneering Sisters was recalled:

“The story of the convent’s first sisters, the later Sister M. Aquin and Sister M. Magdalen, is a saga of pioneering achievement and triumph over hardship. While the convent was being built, the sisters slept in the remains of the old church. In early times, scrub and ferns grew almost to the door of the convent. The sisters became well known, using a horse and buggy for transport, they helped care for lonely settlers, besides looking after the convent. They did much to keep Roman Catholicism alive in the district. At one time the convent cared for about 70 children and had a boarding school for those from remote areas”.

A visitor to Sacred Heart Church today might be surprised by the stories of the pioneering nuns for there is now not even a hint that a convent once existed here. The Presentation Sisters and the buildings have long gone. The timbers of the convent have been removed and now form part of a holiday home in Weymouth. The church however has been recently restored and stands determinedly on a ridge overlooking Karoola; the sole reminder of a very different time and place.


THE CEMETERY AT SACRED HEART KAROOLA 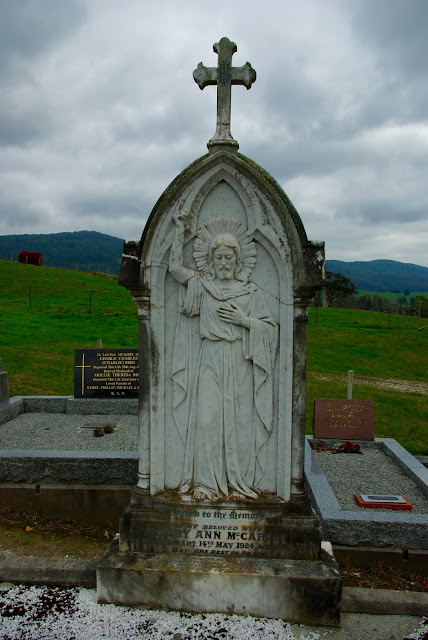 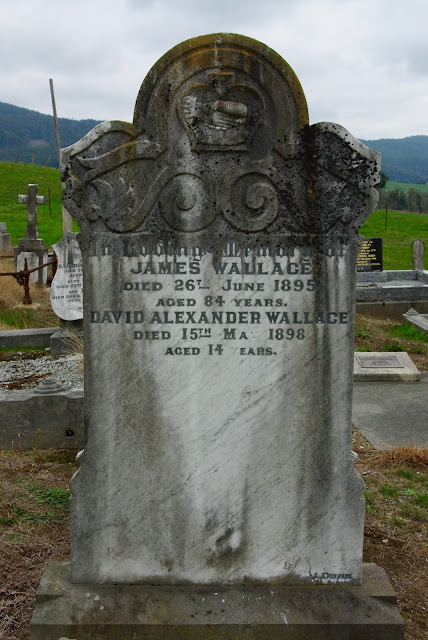 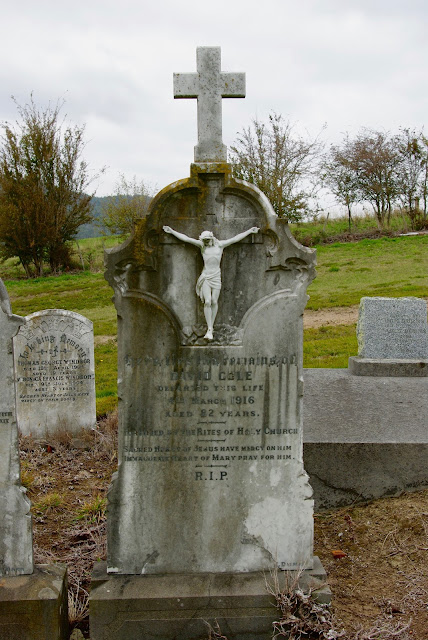 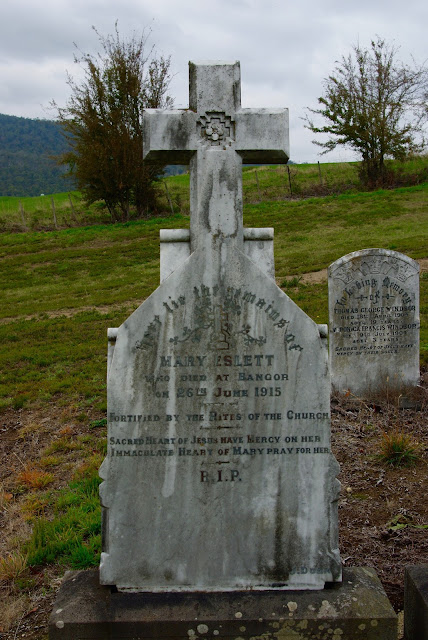 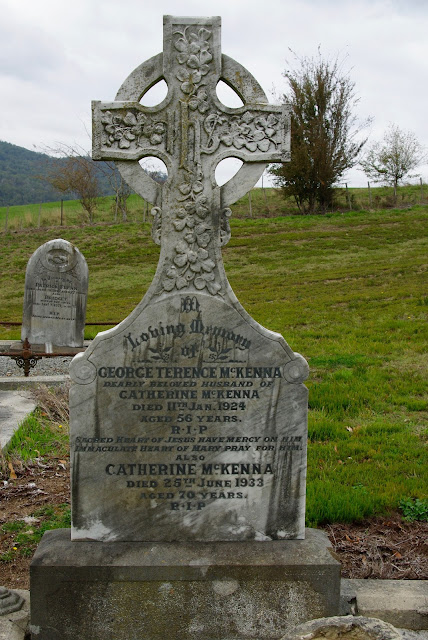 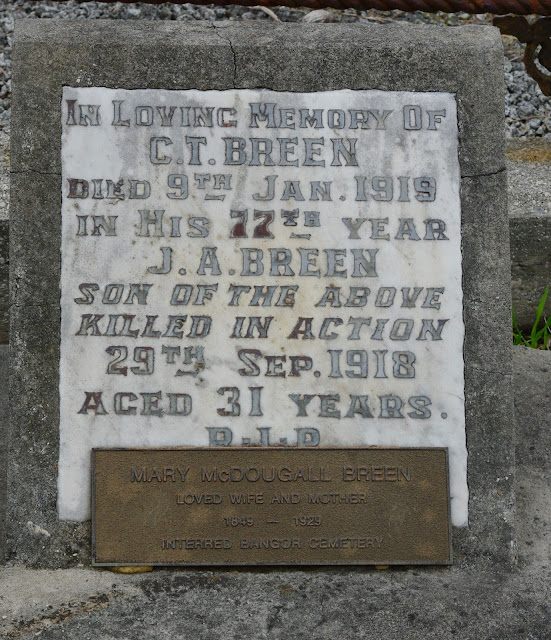 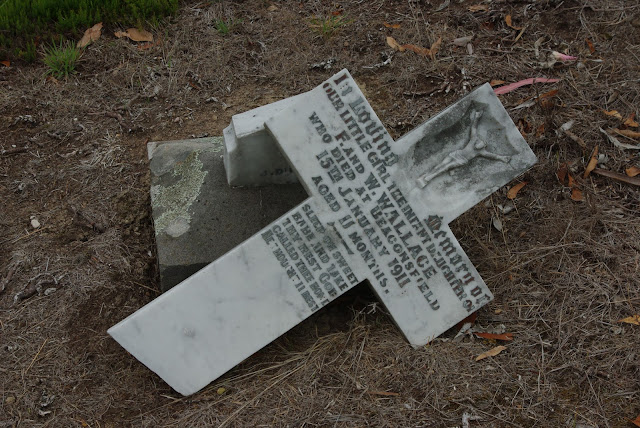 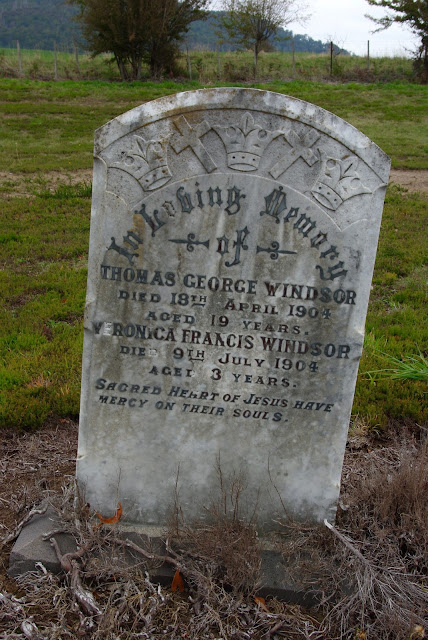