- April 27, 2018
MacKillop Hill at Forth is an appropriate successor to the former St Joseph’s Catholic Church that was founded in 1873. The church was vacant for many years until 1993 when the Order of the Sisters of St. Joseph decided to create a Retreat centre at Forth and renamed the church the MacKillop Hill Spirituality Centre. The centre opened in March 1995.

In 1889 a convent was opened at the church by the Sister’s of St Joseph, led by Sister Francis McCarthy, making it one of the earliest schools to be opened by the Order in Tasmania. The Daily Telegraph reported that:

“Three of the sisters from Westbury are expected to arrive this week to open [the convent]. They will live in a cottage at the rear of the church and conduct the school duties in the church till a schoolroom is built. They also [sic] hold a bazaar on the Queen’s Birthday for raising funds in aid of the school. Archbishop Murphy is expected to conduct a service here next Sunday…”

Archbishop Murphy had been present at the first day of school when the Sisters opened the original convent school at Westbury in May 1887. He was a strong supporter of the Order and was determined that the sisters succeed and his presence at Forth is indicative of this. The Sisters were missioned to 25 schools throughout Tasmania between 1887 and 1999.

There is not a great deal of information about St Joseph’s church in the local press so for the purpose of this blog entry I have chosen a number of 'news' events that provide an insight into Catholic life at Forth. The three reports all have one element in common; that is the 'much-loved' Father Martin Dowling, who was parish priest at Ulverstone for 45 years. They also reflect the drama of Catholic ritual and ceremony and the descriptions evoke images which bring the church back to life in my minds eye.

The Exposition of the Blessed Sacrament

An impressive ceremony was enacted at the Forth Catholic Church on Sunday morning, viz., the exposition of the Blessed Sacrament. The congregation was a large one, and included representatives from Kindred, Don, and Melrose, the church being hardly large enough to accommodate those attending. The altar decorations were carried out in a manner reflecting the greatest credit on the Sisters of St. Joseph’s, who had the work in hand, and consisted of a design of asparagus ferns, asters, and coloured lilies, and over the sacristy was a floral arch of laurels and small sunflowers. After Mass had been said a procession of 100 men, women, and children marched through the church and round the church ground, followed by the priest carrying the Monstrance containing the Sacred Host, under a silken canopy carried by four of the leading gentleman of the congregation – Messrs D. O’Keefe, M. Donovan, D. Hesley, and John Dooley. Appropriate hymns were also sung. After the procession, the Host was placed on the altar, and remained on view till 9 o’clock in the evening”. (North West Post Tuesday 7 March 1911)

The Blessing of the Gates:

St. Joseph's Gates Blessed: After the 9 o'clock Mass at St. Joseph's Church yesterday Rev. Father Dowling, of Ulverstone, blessed the new entrance gates, which were then formally opened by the church warden (Mr Tim Healy). Master Kevin Breen carried the processional cross. Master Max Leary acted as thurifier, and Master Dennis Leary had charge of the aspersorium. The gates are of wrought iron, massive and artistically designed. They measure six feet in width, and hang on imposing concrete Gothic pillars, surmounted by large gold-leafed iron crosses. "The whole work” said Father Dowling, in a short; address; "is a credit to the Roman Catholics who attend the Forth church…” (The Advocate Monday 11 May 1936)

An interesting ceremony was enacted at St Joseph’s Convent School on Friday afternoon and the principals in this pleasing function were the scholars themselves, who a little time back, happening to learn that the particular day was the parish priest’s birthday resolved to show their love and esteem for him in a marked manner. To that end on Friday afternoon the little ones decorated the schoolroom with ferns and seasonable flowers and after the 3 o’clock service Father Dowling was invited to proceed to the school, where the scholars were all assembled. After several choruses had been sung, Mollie Kennedy, after reading, presented Father Dowling with an illuminated address from the children, and Clara Harrington also on behalf of the children, presented him with a handsome biretta and a set of cutlery and table linen. The pleasure the worthy priest felt was plainly noticeable and the opening words of his speech in reply amply expressed his love for the children. He thanked them for their handsome gift and said he would always remember them whenever he uses those gifts, and also eulogised the good sisters for the splendid work that they had done in the school and for the excellent morals and good manners shown by the scholars not only in the school, but in the street. These words were followed by some practical advice, which he said he hoped the children would try and act up to. The children then gave three cheers for Father Dowling and the visitors and were granted a full holiday on Monday”. (Daily Telegraph Monday 6 November 1911)

Father Dowling was born at Kilgefin, Elphin, in Ireland, on November 4, 1880. He was ordained at All Hallow’s Dublin, on December 17, 1904. He arrived in Tasmania on May 5, 1905 where he worked as an assistant priest at Latrobe. Father Terry Southerwood writes in 'Planting a Faith in Tasmania':

“This remarkably generous character…built up the pastoral care of the district of…Ulverstone and Penguin….. In 1922, when his parishioners, fellow priests, and friends gave him £302 towards a holiday in Ireland, Archdeacon T.J. O’Donnel said…”he is one of the best priests in Australia – an enthusiastic worker, who endeared himself to all by his geniality, generosity, and devotedness to the duties of his sacred calling”.  During his trip to Ireland he represented the Tasmanian branch of the United Irish League at the opening of the new Irish Parliament in 1922. While in his beloved homeland, the Tasmanian priest had talks with De Valera, Collins, Griffiths, and other leaders of Ireland. In some ultra ‘loyalist’ quarters in Tasmania, father Dowling was branded as a traitor. Intense sectarianism led to threats to throw him in the river. At this stage, Irish priests in Tasmania were likely to have their mail censored and held up”.

Father Martin Dowling is a fascinating man and I will be writing more about him in an upcoming blog article on the Catholic Church in Ulverstone. 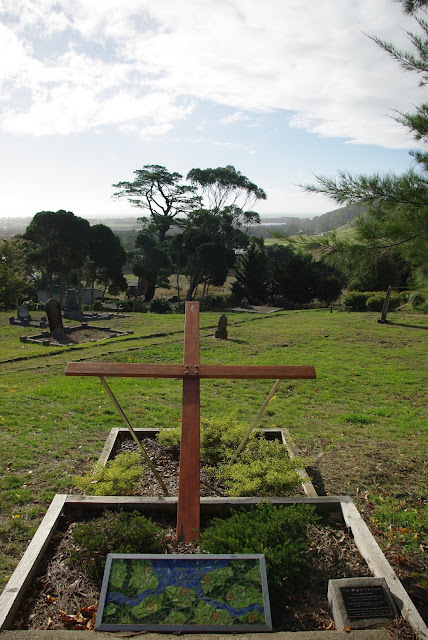 LINK - Pilgrimage "The AWay Across Tasmania"

Initiated by Archbishop Doyle and Inspired by the Journey of the World Youth Day Cross and Icon around Tasmania from 11th – 19th May, 2008. The Parishes of the Archdiocese of Hobart have together created a magnificent and truly special Pilgrimage route, marked by life sized crosses,  around our beautiful state for all to enjoy.

Currently fourteen crosses have been carefully planned and each uniquely designed by Parishes, reflecting local industries, interests and the needs and focus of their communities.  Each Cross was funded and constructed by that Parish to form part of the wider Tasmanian Pilgrimage, each with their own story to tell.  (link above)

The Cemetery at St Joseph's