- May 25, 2018
The word ‘Avoca’ is derived from Gaelic and means ‘meeting of the waters’. The church of St Thomas sits at the confluence of the South Esk and St Paul's rivers. The meeting point of two bodies of water can at times be a place of great turbulence. This is an apt symbol for the story of Avoca’s iconic church.

In October 1838, the Governor, Sir John Franklin was petitioned for a grant in aid to build a church at Avoca. The petition was successful and a church was commissioned. The architect was James Blackburn who had also designed the church at Port Arthur three years earlier.

In March 1840, the Governor visited Avoca to inspect the progress of the church. A subscriber to the Colonial Times of Hobart wrote an account of the journey:

“His Excellency, Lady Franklin, and party, having embarked on board the Eliza, at Spring Bay, [they]…arrived the following day at Waterloo Point, [Swansea] where they remained…until Wednesday, when the party proceeded on horseback over the Tier to the residence of Dr. Brock, where a party of gentlemen were assembled to meet them. Having partaken of a substantial lunch, His Excellency and Lady Franklin proceeded in Dr. Brock’s carriage to Avoca, where they were greeted by a large assemblage of neighbouring inhabitants. His Excellency appeared much pleased with the new church at Avoca, which (when finished) will add much to the appearance of that beautiful township. The Royal party then proceeded in Mr Talbot’s carriage to the residence of that gentleman, where they remained to explore the pass to St Patrick’s Head….”

The church was completed and opened on St Thomas’ Day in 1841. Over forty years were to pass before it was consecrated in August 1886.

A description of the church at its centenary in 1941 paints an evocative picture:

“For 100 years St Thomas’ Church has stood upon a rise in the wind-swept valley of the South Esk River, and overlooking the St Paul’s River. Simple in design, its beautifully chiselled freestone nave, sanctuary and clock tower are a feature of the landscape The interior is somewhat severe, an effect heightened by the plaster finish, but mellowed by the beautiful stained glass east windows…The furniture is of cedar, which must have been brought to Tasmania in great quantities in the early days, …There are uncomfortable but enchanting box pews, and a pulpit which suggests that in the old days the congregation were expected to look up to their minister. The first minister associated with the church was the Rev. Mr Richardson who was at the church for 31 years”.

The pulpit is reputedly the highest in Tasmania, but it was not high enough to save Reverend William Richardson from a scandalous falling out with elements of the congregation. Richardson became engulfed in a scandal in which it was alleged that Bishop Bromby subverted his own enquiry into the matter. Although the details of the accusations and rumours are not publicly recorded, they attracted the attention of the Cornwall Chronicle.

In December 1870 an editorial referred to the matter as a “grave public scandal” and stated that “the case has been known to us for some time past, and we should have preferred being spared the pain of alluding to it”. A correspondent to the Cornwall Chronicle described how unpleasant rumours had resulted in a “falling of in the numbers attending public worship in the church”. Richardson himself had written to the Bishop seeking him to undertake an inquiry. Unfortunately for Richardson the commission that was appointed met without his knowledge following correspondence between the Bishop and Richardson’s detractors:

“The commission attended at Avoca and examined a number of witnesses in the church. Mr Richardson, hearing of the investigation, incidentally, attended to ascertain what was said against him; but, at the instigation of a principal witness, he was not permitted to be present, and even his son, a churchwarden, was ordered out of court”.

The issue is complex but the Chronicle’s charge was that the Bishop may have made an error by responding to unsubstantiated accusations by a disaffected group in the church and was attempting to sweep the matter under the carpet:

“The charges are of a scandalous character, affecting the honour of the church, no less than the honour of Mr Richardson, and it is due to the church and to society that they should be fairly investigated. We hear it rumoured that efforts are being made at compromise, with a view to dispose of the reverend gentleman accused, without exposing the scandal…”

The scandal played out in parish politics at the annual election of churchwardens in January 1871:

“The election of churchwardens for the year 1871, …caused rather more excitement than such meetings usually do in our quiet township. For some time past there has been a difference between the incumbent and some of the churchwardens, as well as a large portion of the parishioners. On this occasion an effort was made to prevent the re-election of one of the retiring churchwardens, Mr C.R. Foster; the other, Mr Parker, declining to stand. When the opposing parties were duly seated…the usual declaration with regard to habitual attendance…was to be produced and signed, and gave rise to considerable discussion”.

The term ‘discussion’ was used euphemistically because civilities soon broke down:

“It seemed difficult to say who was a habitual attendant, and who was not. One of the oppositionists was objected to by the incumbent, who occupied the chair, on the ground that he had attended the Wesleyan meetings …Others were objected to for having, as was alleged, only attended church once during the past twelve months… After this the meeting became somewhat disorderly; one person present suggesting that the chairman should be hooted out the parish; the chairman, in return, threatening to send for the police; a third saying that the police could not be found, as they had gone to a neighbouring station to look for mutton… One of the outgoing churchwardens remarked that a house divided against itself could not stand, and as he regretted to see such dissensions in that house he withdrew from the meeting…. Matters were conducted with much irregularity, the chairman not taking down any of the proceedings of the meeting, and not declaring the successful candidates to be duly elected”.

The retirement of Reverend Richardson soon after this matter seems to have resolved the conflict within the community. What is clear is that Richardson was a colourful and eccentric character who did not fit well with many in the church. His saw himself as an inventor and a poet, both of which attracted criticism from his detractors (see links provided below). There is also a reference to his being previously “suspended” by the Bishop for “very unorthodox behaviour”.

The years that follow the era of Reverend Richardson are much less turbulent and St Thomas’ Church fades from the pages of the newspapers, with only a few events of interest recorded. One of these is the installation of the clock on the tower, 98 years after it was built. The Examiner explained that:

“When St Thomas’ Church at Avoca was built 98 years ago a place for a clock was provided in the tower, but the timepiece is just being installed. No movement was ever made to place one there until Mr Frank Arnold came to Avoca to take charge of the state school. It was mainly due to his energy and determination that £100 was raised so that the soldiers memorial clock could be placed in the tower”.

The memorial clock was installed in July 1939, just months before the outbreak of another world war. A further point of interest is that the clock was the second version as the original was destroyed in a fire at the Proud’s Factory in Sydney before it could be shipped to Tasmania.

St Thomas’ Church is once again entering a period of turbulence. This time there is no controversial minister. The congregational has dwindled away to be almost non-existent. It is soon to be sold by the Anglican Church. It has become an empty house, rather than a divided house. It is the former which will see it fall under the auctioneer’s hammer.

Links for the Reverend William Richardson 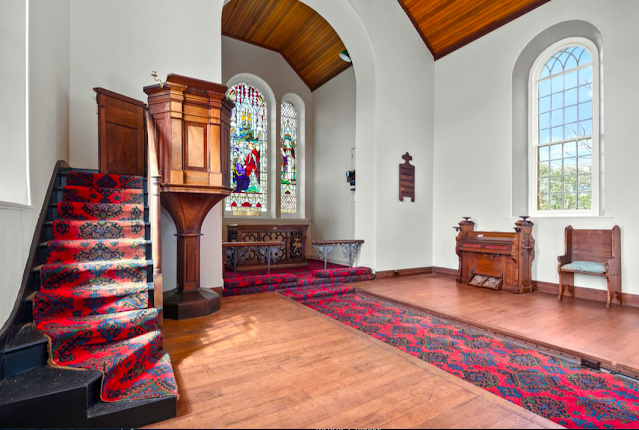 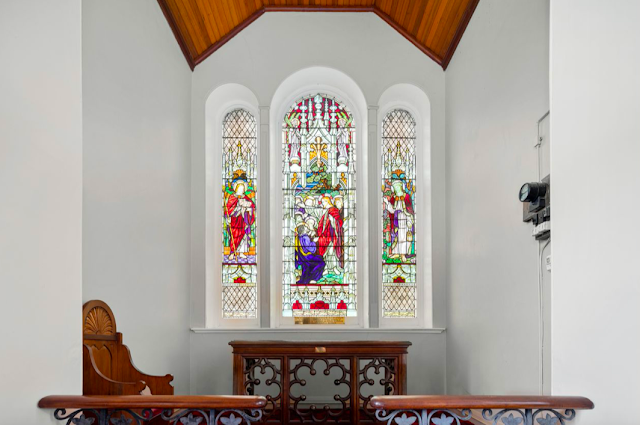 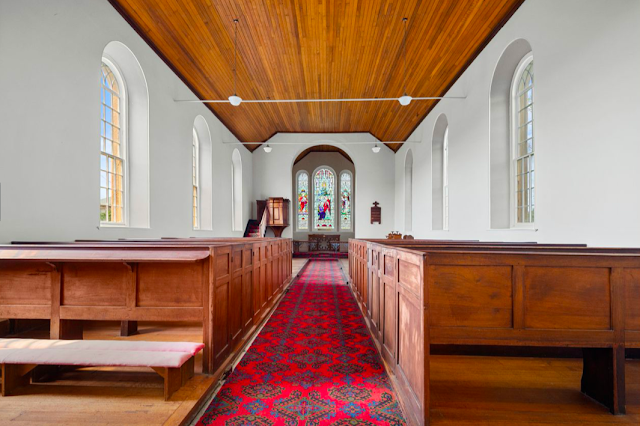 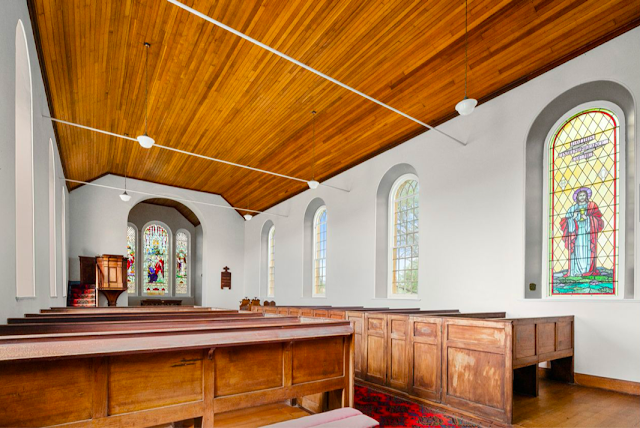 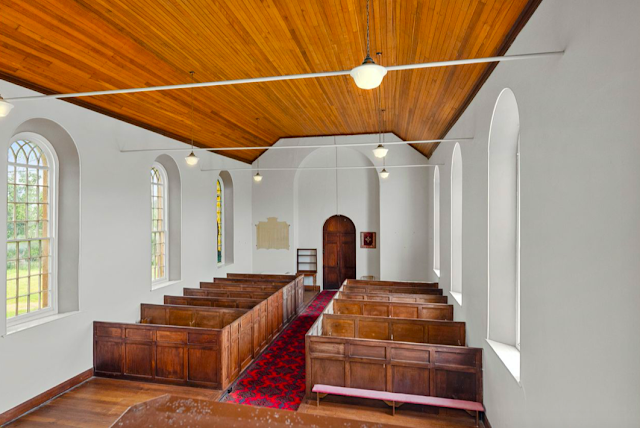 The Anglican Cemetery at Avoca

The cemetery is well is well maintained although resident wombats have dug into graves and some stones have toppled over as a result. (all photos are my own) 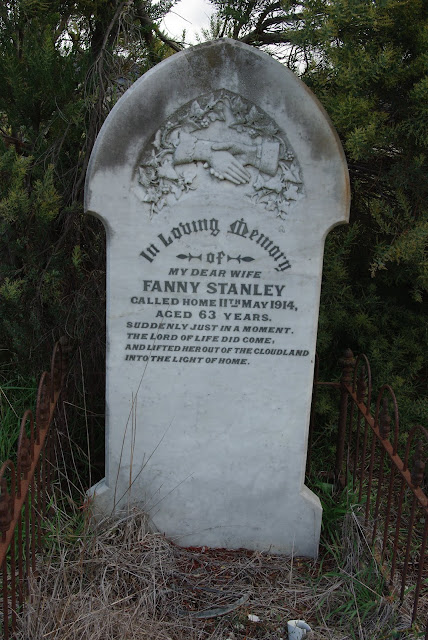 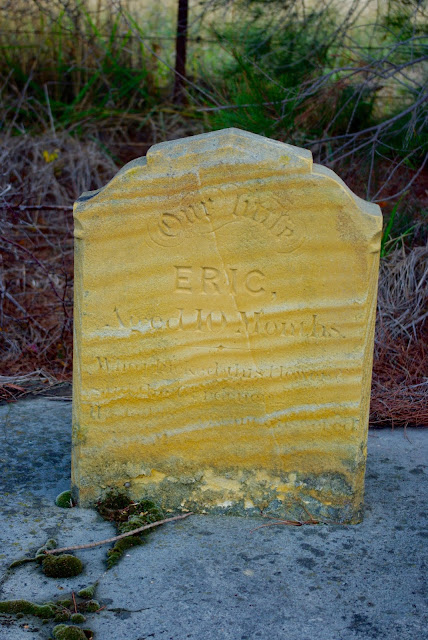 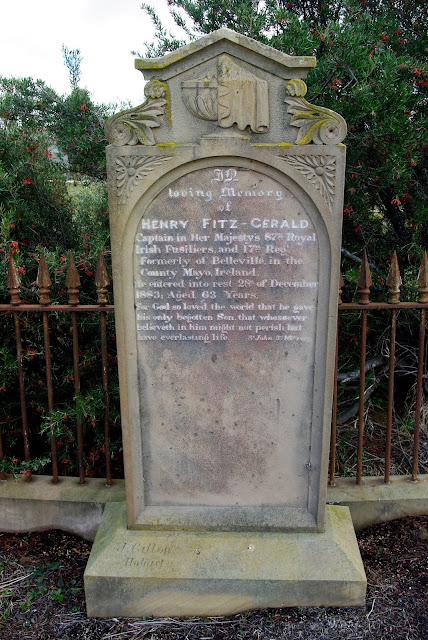 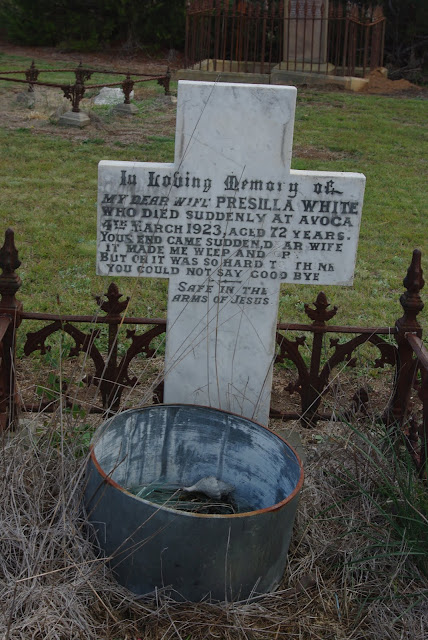 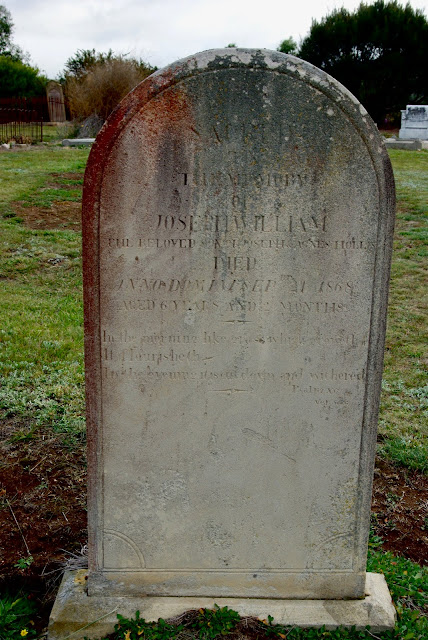 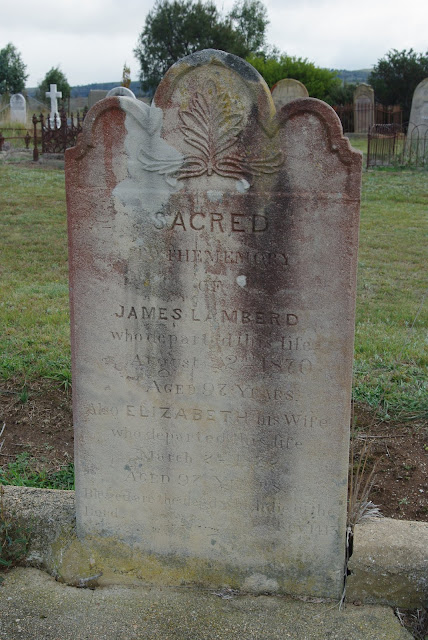 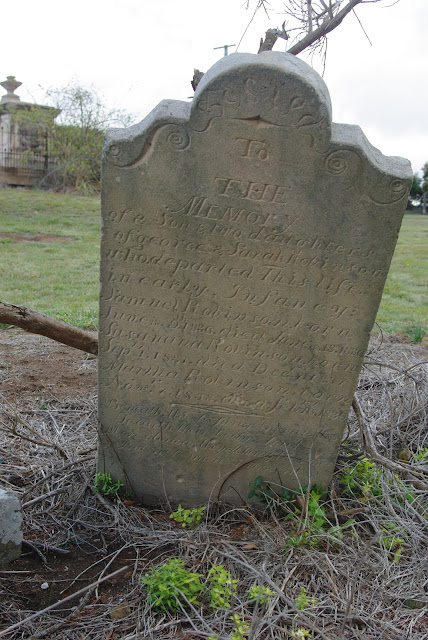