No. 184 - St George's Anglican Church - 'Morals and Manners at Mathinna'

- June 29, 2018
The settlement of Mathinna in the upper reaches of the South Esk River Valley is now a shadow of the thriving town of a century ago. The discovery of gold accelerated the growth of the town from the 1870’s and the establishment of the Golden Gate Mine briefly turned Mathinna into the third largest town in Tasmania. Today less than 150 people live at the settlement.

By the 1890's there were three denominations at Mathinna. St George’s was built in 1896 on a hill overlooking the town. The opening of the church on Sunday 29 March received little attention in the press apart from a brief report that Reverend Vale preached the first sermon and this was “attended by crowded congregations”.

This blog entry will draw on a few events in Mathinna’s history that are connected, albeit loosely, to St George’s church. These vignettes of church and town allow a glimpse into the lives of the people of Mathinna, which in some respects are not that far removed from our own times.

Morals and Manners in Mathinna

In 1908 a series of letters published in the Daily Telegraph concerning the ‘youth’ of Mathinna caused a stir in the town. This was also taken up in a sermon at St George’s:

The letter in in question was penned under the pseudonym ‘Pro Bono Publico’. The complainant wrote:

“One does not need a microscope to discern something radically wrong. Young people in their early teens (both sexes, Mr Editor) are to be seen perambulating the streets at very late hours – mere children roam about at their own sweet will; in fact, in several cases parental control seems to be a matter of ancient history. But it is in reference to the “hoodlum” class that I particularly wish to direct attention: those young fellows who puff their cigarettes with a “you-can’t-teach-us-anything” air, imagining the world was created for their special benefit, and congregate in the streets using language too disgusting to be heard by ears with any regard for decency. Even if ladies happen to pass in proximity to them there is no consideration shown. It is a self-evident fact that larrikinism and immorality are rampant here, and some steps must be taken to bring matters a little nearer the mark”.

A second letter to the Daily Telegraph from ‘Editio Princeps’ supported the views of ‘Pro Bono Publico’ and refuted the views of Reverend M’Eachrean who had stated in his sermon that:

“He had been to many places which would not compare favourably with Mathinna in morals or in good manners” and advised “the exercise of a helping hand to those in need of such, rather than the use of such harsh and abusive terms towards them”.

‘Editio Princeps’ responded to those who he saw as to be in denial or out of touch, such as Reverend M’Eachrean. The letter writer suggested that they had not:

“Realised the extent to which the hoodlums rule the roost in Mathinna, and observed the moral training extended to the young boys by the older larrikin element… The sources of employment in Mathinna are not great at present, hence we have in our midst many idlers – others are so from choice – and these it is, who never work, but at all times appear fashionably tailored, and win for Mathinna its low moral standing… How many children are to be seen nightly parading the streets of the town long after the adults have retired! The arm of the law is powerless to send them home to their beds, and in these nocturnal manoeuvres they receive the rudiments of bad manners and citizenship”.

A Hero returns and a Memorial Service

Mathinna sent many of its sons to the Great War and memorial services and patriotism were a feature of the war years. The church sustained hope for families for the safe return of their sons and remembrance of those who would not come back:

“On Sunday the Rector of Fingal, Rev. C.L. Cox, held a special memorial service for our fallen soldiers in St. Georges Church here. The church was tastefully decorated with flags and the colours of the Allies, interspersed with laurel wreaths and everlastings. There was a large congregation, and special hymns were sung, and a most interesting and impressive service ended with the singing of the National Anthem.

On the Monday the ‘Banner of Welcome’ was once more evident, on this occasion being the return of another of our wounded heroes from the Dardanelles, in the person of Private Hughey Maher, who was shot through both thighs. The township was gay with bunting, and the large banner bearing the inscription of “Welcome Home” was stretched across the road from Polley’s Hall, and in addition, ropes of flags graced the street from every convenient point of vantage. Towards 6 o’ clock crowds of townsfolk of both sexes began to assemble… to await the arrival of the honoured guest. When the motor bearing the returned soldier arrived it was greeted with ringing cheers…”

St George’s Bell – Ringing in the Armistice
St George’s acquired a bell in October 1903. The Daily Telegraph reported that:

“A large new bell, weighing 140lb, and supplied by the Phoenix Foundry, Launceston, is being hung in the belfry of St. George’s Anglican Church. The bell, which has a fine melodious tone, is a great acquisition and may be plainly heard by all within the township confines…”

It was this bell that rung news of the armistice 15 years later:

“The official news that peace was declared was announced about 9 a.m. on Tuesday by the ringing of the church bells, and almost immediately flags and bunting appeared on every pillar and post. The fife and drum band led by the head teacher of the State school (Mr. Whitchurch), assembled at the post office, and in a short time a great number of both young and old formed into a circle, and cheers were given and the National Anthem sung. A procession then formed, and, with the band leading, marched through the principal streets and back to the post office, where there was some more singing and cheering. Subsequently there was a monster demonstration at the recreation ground. Altogether it was a splendid affair for the short notice received. After marching to the recreation ground the crowd formed into a square, where patriotic songs were sung and cheers given for the King, Marshal Foch, General Haig, the Commonwealth soldiers, our Allies and Lloyd George”.

One hundred years later, St George's precariously sagging bell tower symbolically brings the story to full circle. St George’s is the last remaining church in Mathinna. The Methodist church has gone and the Catholic church of St Scholastica has been sold and is in dire need of restoration. St George’s too will shortly pass into history as it will be sold off by the Anglican Church to redress a lapse in its own morals in more recent times. Mathinna will be without a church for the first time in almost 150 years since the town's establishment .

Headstones in the Anglican section of the Mathinna General Cemetery. 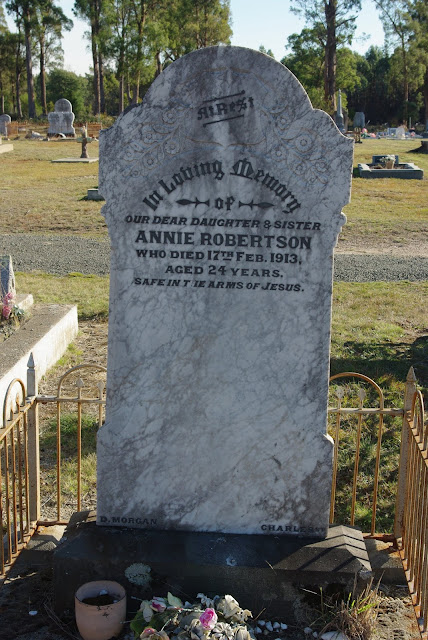 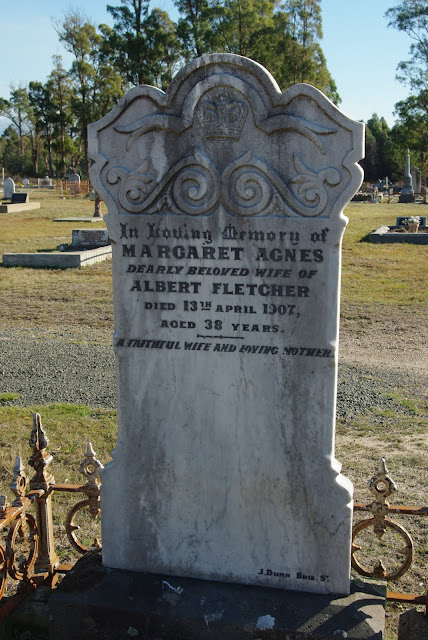 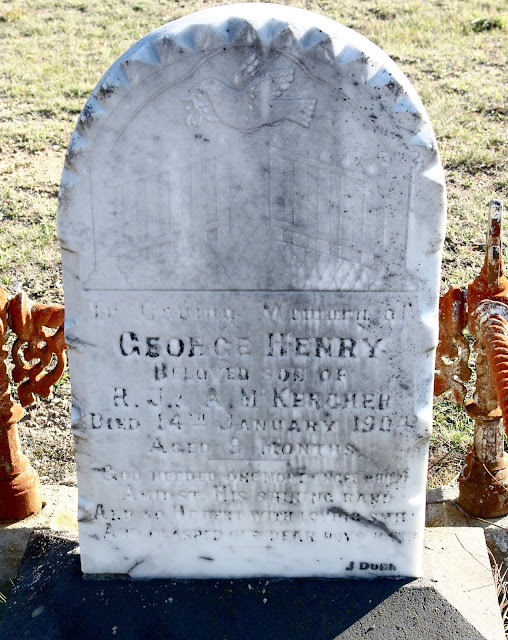 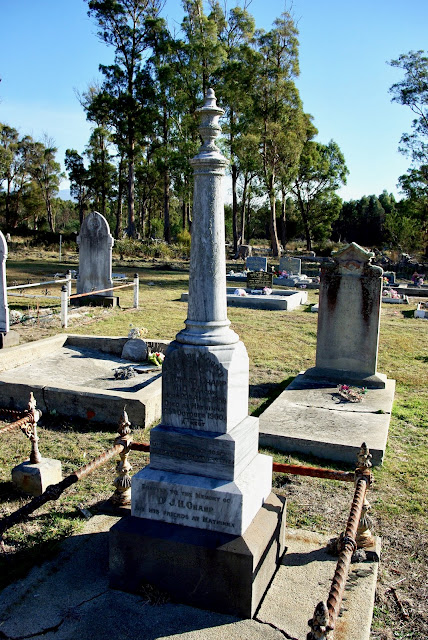 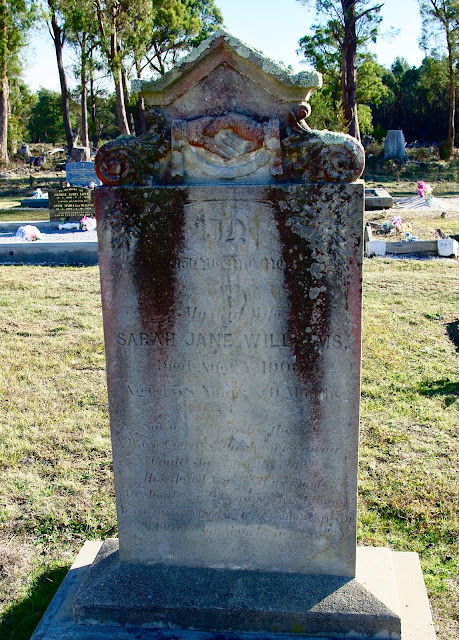