No. 208 - Church of Christ at Sandhill (South Launceston)

- August 05, 2018
The Church of Christ was established in Tasmania in August 1884 after an advertisement was placed in the Examiner calling for 'disciples of Christ' to start a new church. With only nine members, meetings were initially held in private homes and halls. In 1913 the church experienced a period of rapid growth after a mission tent was erected on the corner of Kings Way and Brisbane Street where almost 300 people “committed their lives to Christ”.
As a result of the 'tent missions' the church became strong enough to purchase a building in Margaret Street. Originally built by the Catholic Apostolic Church, the Margaret Street church had to be enlarged to accomodate the growth of the congregation.

Following the acquisition of the church on Margaret Street, the Church of Christ went on to establish congregations in suburbs across Launceston including Invermay, Prospect and Sandhill (South Launceston).

There is little information in the local press about the establishment of a congregation of the Church of Christ at Sandhill and there are no surviving newspaper reports about its opening. It was listed in Wise’s Street Directory in 1929 and advertisements for services first appeared in the Examiner in February 1928. Similarly, its date of closure is not known although it was still very active in the 1950's as evidenced by reports and church notices appearing in the Examiner.

This summary will be updated when further information comes to hand. 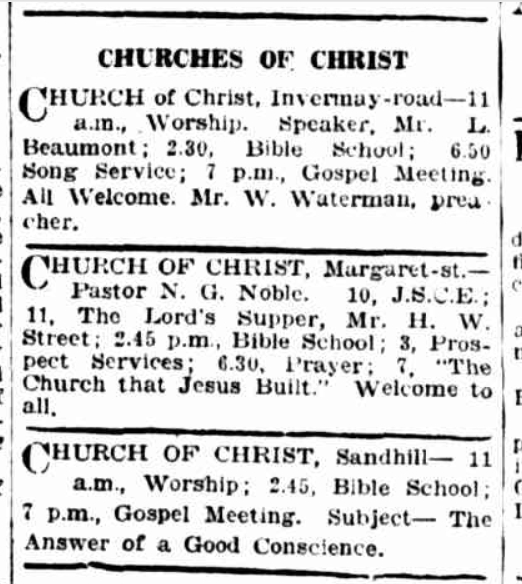