No. 222 - The former Presbyterian Church at Lilydale - 'The Lilies of Lilydale'

- August 31, 2018
Lilydale’s Presbyterian church was the first church at what was once Upper Pipers River. It was built as the Union Church to be shared by Presbyterians, Wesleyans and Independents. It opened in 1880 following the work of a committee formed for the task of establishing a place of worship for the town. The chairman of the committee, John Somerville, was the son of Reverend John Somerville, the minister of the Kirklands Presbyterian Church. The land was donated by Ludwig Bardenhagen.

The first minister was Reverend Mather of Scottsdale. Emily Killworth, daughter of Mr and Mrs John Wilson, early pioneers of the district, wrote that it was Reverend Mather’s wife who was responsible for Upper Pipers River being renamed Lilydale:

“It was Mrs Mather, wife of Rev. Mather… who was stationed in the district, who gave Upper Pipers River (as it was then called) the name of Lilydale. When Mr and Mrs Mather came to live in the district the roads and hillsides were covered with sags which have those pure white lilies* as their flowers and they were all in blossom at the time. As they journeyed around the district visiting the people they saw these lilies wherever they went, and Mrs Mather said to her husband: “This place should be called Lilydale, not Upper Piper.” I do not know when it was renamed, but that was how Lilydale received the name”.

In 1889 the Wesleyans decided to build their own church. The parting of the ways between the Presbyterians and Wesleyans was amicable and the committee established for the building of a new church proposed that:

Thus from 1890, the Union Church became the Lilydale Presbyterian church. It remained virtually unchanged until 1953 when it was extensively restored for the first time in over 70 years:

“Extensive renovations which include a new floor and new weatherboards on the walls are being carried out. When the building was erected, split palings were put on the exterior walls, and on the southern side, the palings are still in good order… [and] would have lasted for at least another 30 years…. However, the palings have been removed to make both the walls uniform…”

The palings could have well only lasted for another 30 years because the building was sold in 1989 and removed to Bishopsbourne where it was converted into a house. It is still there today and appears to have undergone another renovation and modernisation in the last few years. 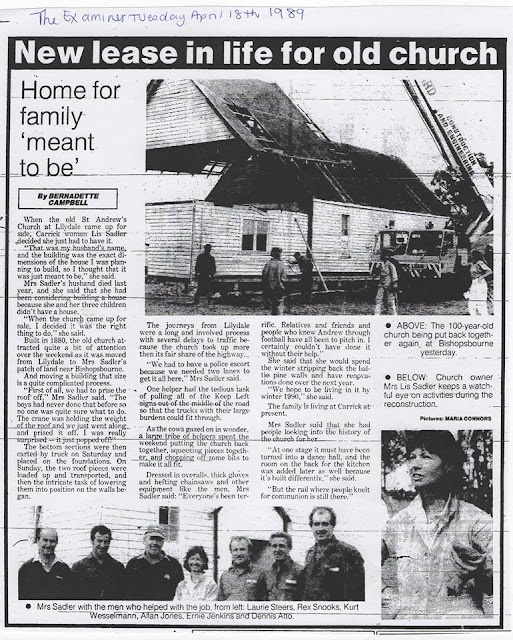