No. 223 - Ross Uniting Church - "Not the Slightest Hitch or Blundering"

- September 01, 2018
The first recorded Methodist service at Ross was held in May 1832 and by 1836 a Methodist society was formed. A chapel was built in 1838 and opened in early 1839 at a site at the intersection of High Street and Bond Street. By the 1870’s the chapel was found to be no longer adequate and a new church was planned at the summit of the hill at the southern end of Church Street.

The laying of the foundation stone of the new church was reported in the Launceston Examiner:

“On Wednesday last [Wednesday 13 December 1882] a large concourse of people assembled at Ross to witness a very interesting ceremony in connection with the laying of the memorial stones of the new Wesleyan Church at this place. The trustees of the building had invited Mrs Horton of Somercotes, and Mrs Parramore, of Beaufront, to lay these stones, and all were pleased that these venerable and highly respected ladies had consented to be present…. The building is on one of the best sites on the township, and will be seen for miles by the traveller as he approaches the town; its style will be Gothic, and will cost nearly £3000 before completed. The architect is a Tasmanian, an old Horton College boy, though now of Melbourne – Percy Oakden, …”

A memorial document was placed under the foundation stone. It read:

“The old sanctuary, in which the Wesleyan Methodists of Ross and its neighbourhood have worshipped for nearly half a century, and which has become endeared to them by the associations of the past, being found unsuitable for present requirements, and the building itself fast falling to decay, it was therefore decided in the month of May, 1879,… to commence as soon as practicable the erection of this building, of which today two memorial stones are to be laid, one by Mrs Horton, relict of the late Samuel Horton, Esq., of Somercotes, and one by Mrs Parramore, relict of the late Thomas Parramore, Esq., of Wetmore and Beaufront…. The document having been read… each lady with the silver trowel spread a little lime, helped to lift the stone to its place, applied the level, and then with three taps of the mallet declared “this stone well and truly laid in the name of the Father and the Son and the Holy Ghost”.

It took nearly three years for the church to be completed. The construction was not without incident as was reported in The Tasmanian in September 1884:

“On Saturday night some larrikins commenced a career that will lead to serious consequences if continued, by cutting the heads of some of Mr C. Goss’s poultry, and destroying a quantity of eggs,… Not content with this, they severed one of the guy-ropes of the shear legs used in building the spire of the new Wesleyan Church. If the cut had not been noticed before Mr Wills was hoisted to the platform a fatal accident might have happened…”

The opening of the church took place on 22 November 1885. The Hobart Mercury reported that: “the congregation was large, the church being filled to overflowing” and concluded that “the service was indeed a grand success… which from beginning to end…[without] the slightest hitch or blundering”.

Another report in The Mercury provided some details of the church structure:

“The site was the gift of Mr Thomas Parramore. The church,… is of freestone taken from the Beaufront Estate… The roof is slated. The whole of the woodwork, including the internal fittings, was done by Messrs. J. and T. Gunn, of Launceston…. On the north side of the church is a beautifully stained window, placed there… by old students of Horton College, as a memorial of their connection with that institution…. The church will comfortably seat from 250 to 300 persons, and the voice of the preacher can be heard clear and distinct from any part of the building”.

Now part of the Uniting Church, the building is beautifully preserved and remains a beacon on the hill visible to travellers passing Ross along the Midland Highway.

The fate of the old Chapel

The original Wesleyan chapel on Bond Street continued to be used for a time but gradually fell into a state of disrepair. In 1888 considerations were given to purchasing it as a public hall and reading room. This did not eventuate for in 1908 it was reported that the chapel and the graveyard behind it had become a target of “larrikins”:

“One of the stewards of the Ross Methodist Church called attention to the manner in which the front door pillars, and pediment at the main entrance of the old Methodist Church had been bombarded with stones. The surface of these is literally covered with deep dents caused by stones being thrown against them. The door was also broken open, and a cedar screen, which forms a porch inside the doorway, was also used as a target. At the back of the building are several graves with tombstones, and one of these, a fairly large stone, was deliberately thrown over and broken in two… it is a pity to see it wilfully disfigured. Some of the rising generation here are getting out of hand, and steps will have to be taken to restrain them and punish them for larrikinism”.

In 1932 the chapel was demolished but its entrance pillars and pediment were salvaged to create a monument to the pioneers of Methodism at Ross. In 1935 at the 50th jubilee celebrations of the new church, the pioneer monument was erected at the foot of the church tower. If one looks closely, the ‘dents’ caused by ‘larrikins’ can still be seen on the two pillars taken from the old chapel. 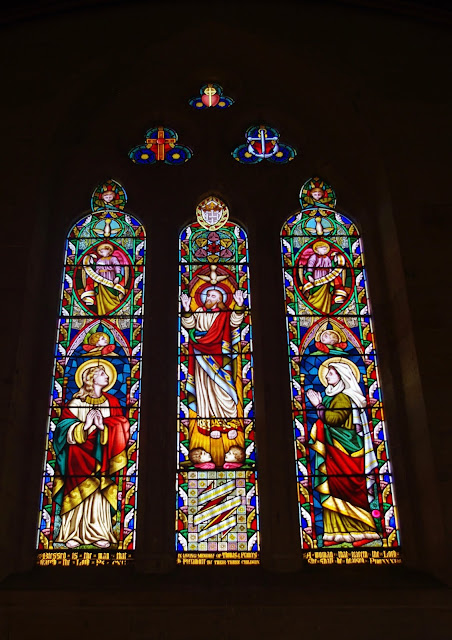 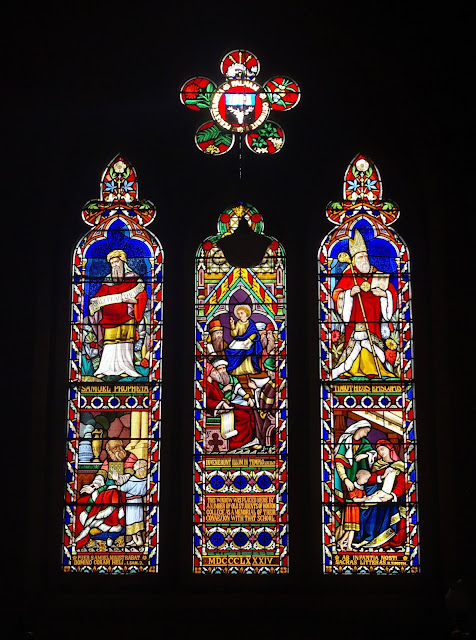 Headstones of Interest at the Methodist Cemetery at Ross 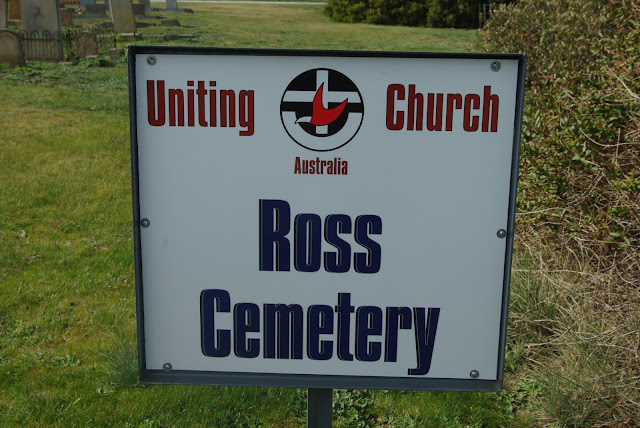 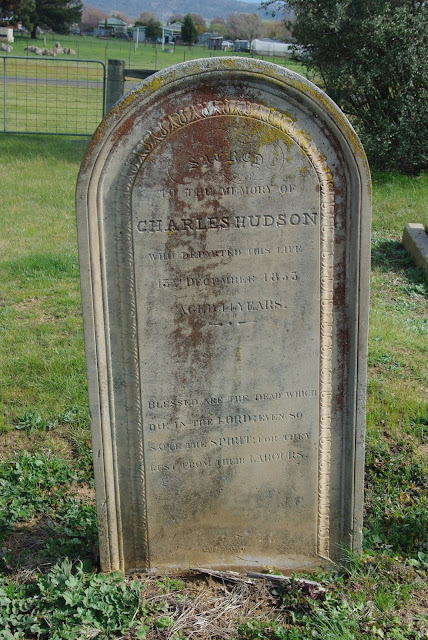 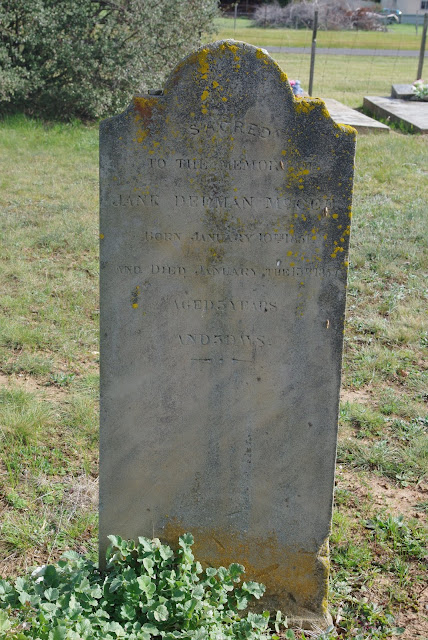 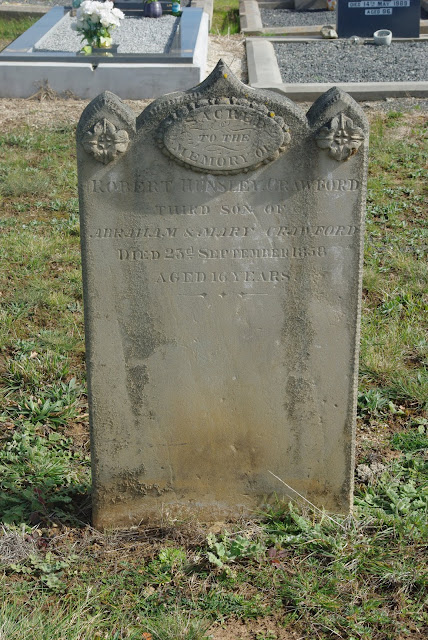 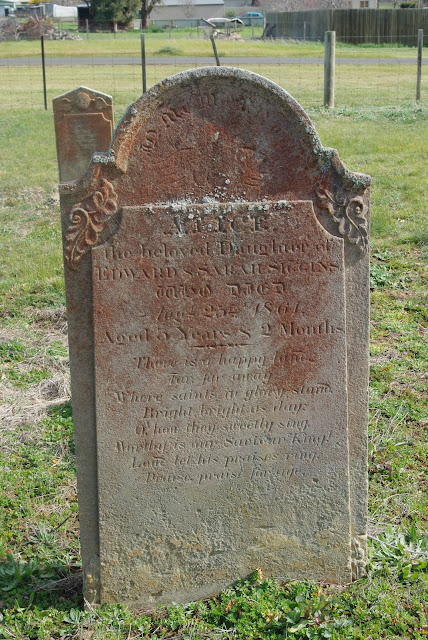 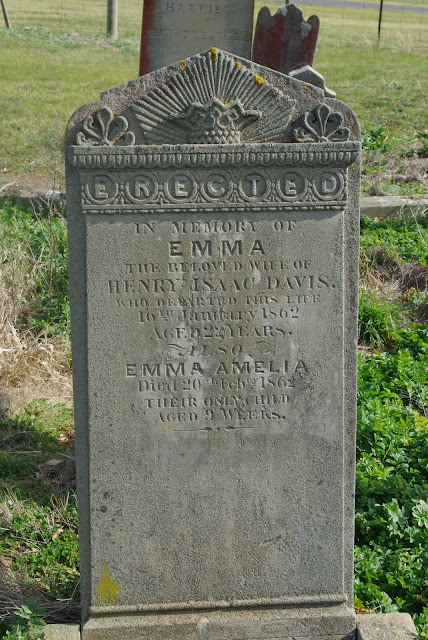 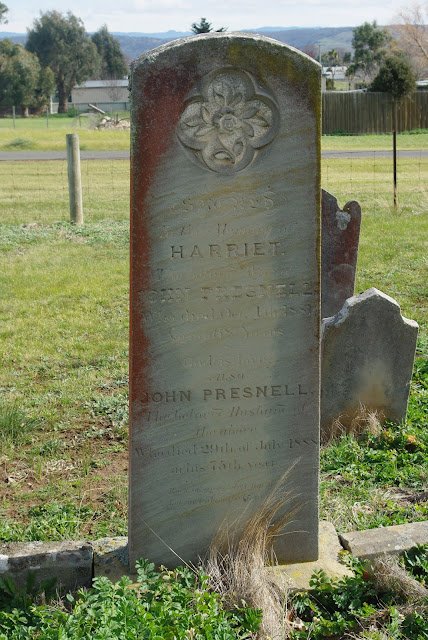 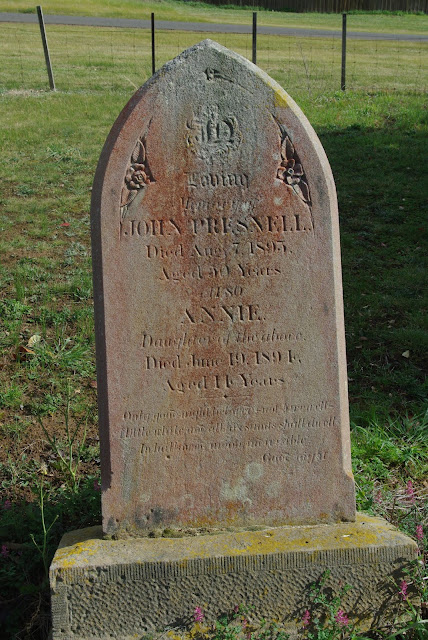 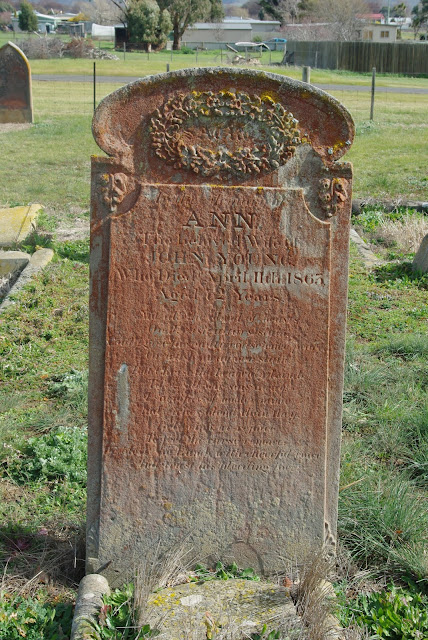 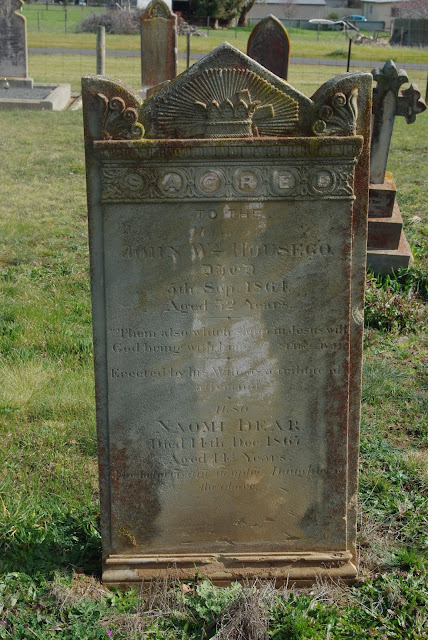 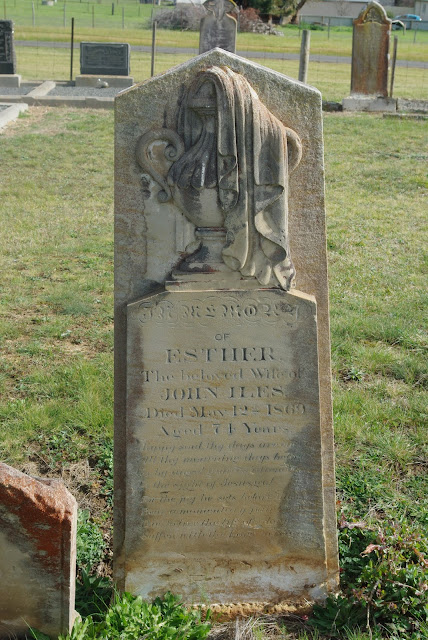 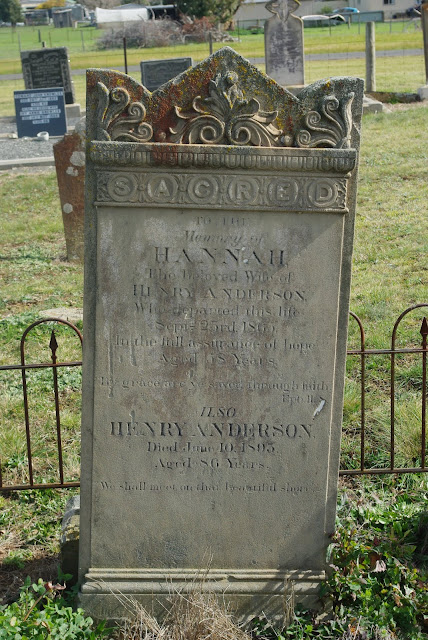 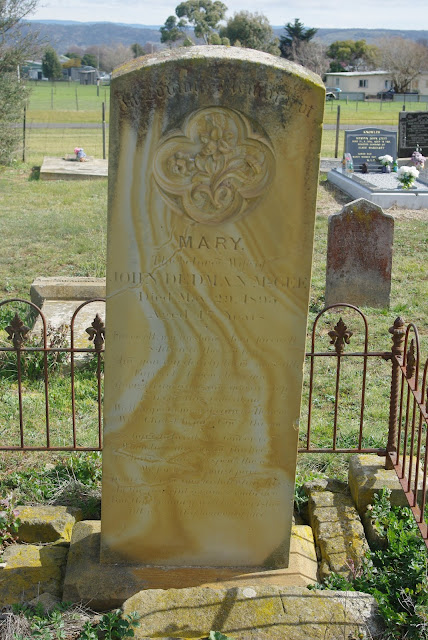 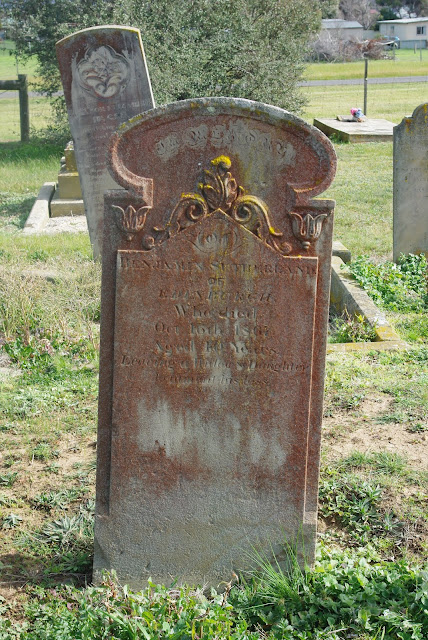 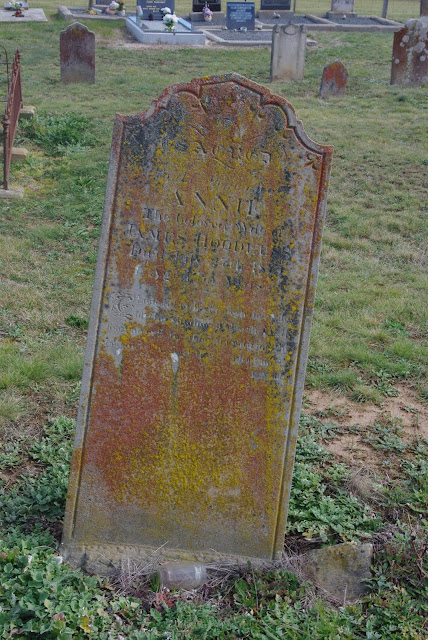 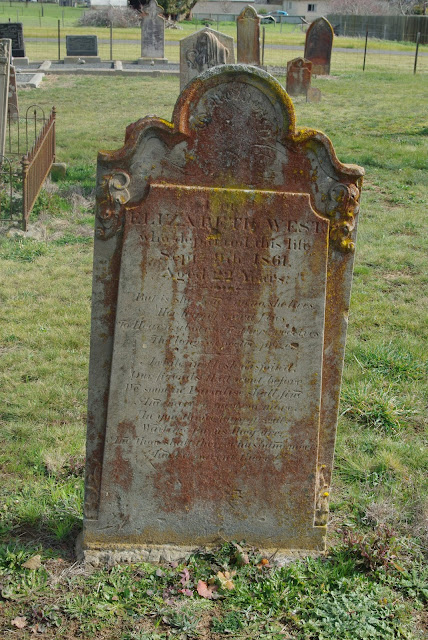 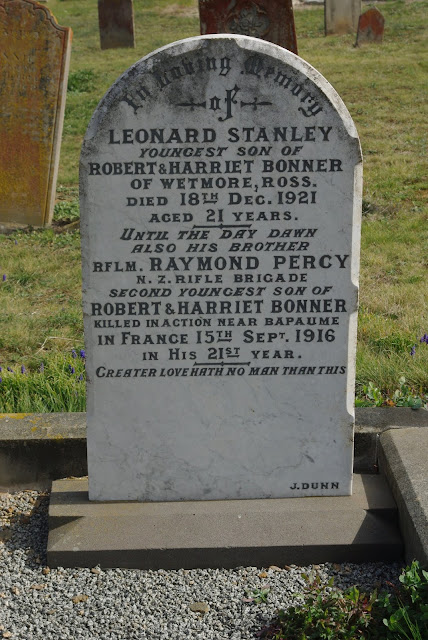 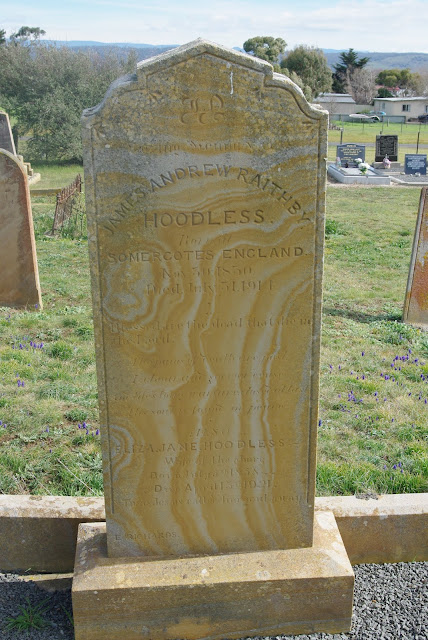 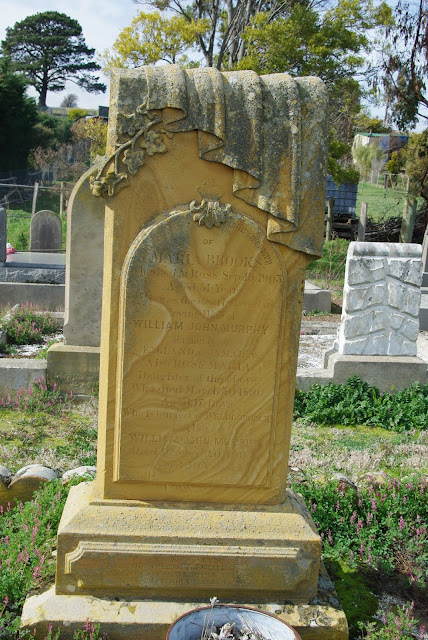 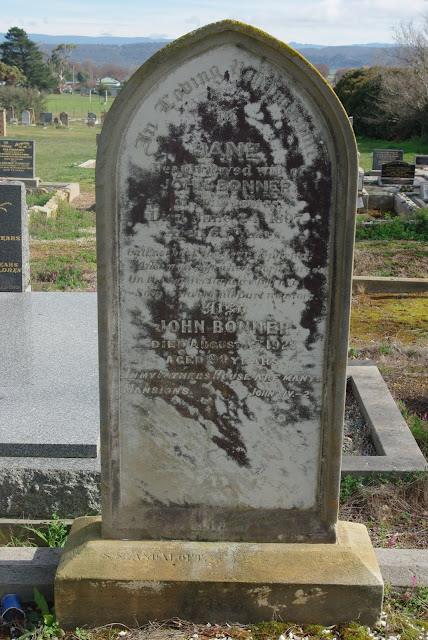 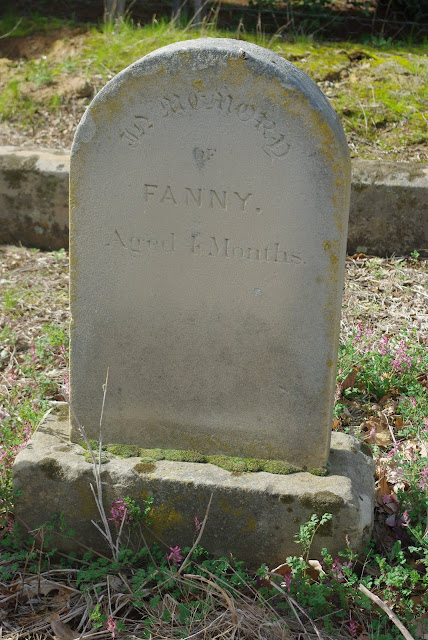 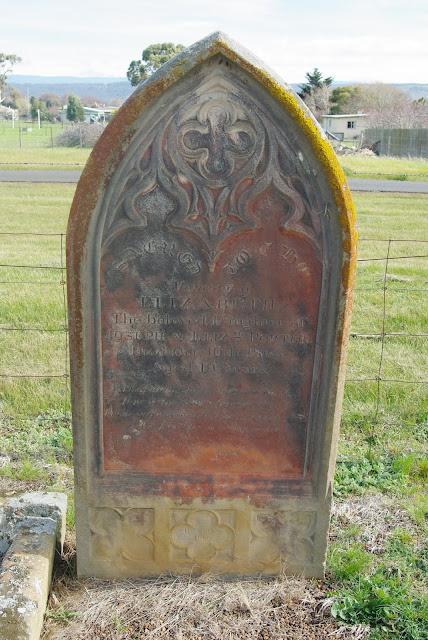 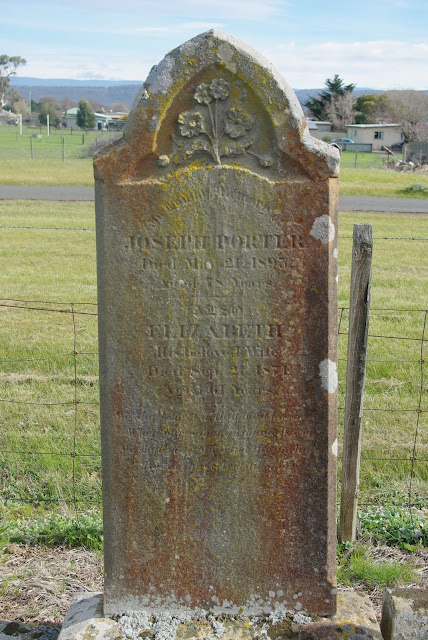 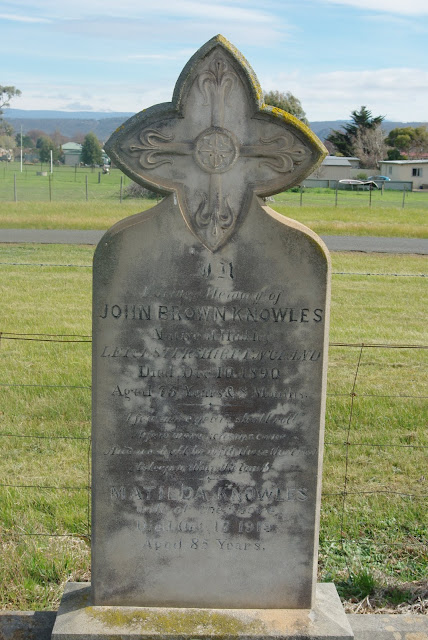