- October 22, 2018
Pioneer was originally known as Bradshaw’s Creek, so named after William Bradshaw who discovered tin in the area. The Pioneer Tin Mine was established in the 1870’s and its name eventually became that of the settlement.

In 1904, the “Special Travelling Representative” for Daily Telegraph of Launceston described the settlement at Pioneer:

“The township itself consists of one long street, extending right round the Pioneer tailings dump, and continuing on from there as the road to Gladstone… There are a number of neat cottages and villas erected on building allotment sites that were sold not long ago by the Government, and several of these homes, which belong for the most part to steady employees at the mine, have been greatly improved in appearance by having added to them pretty little flower gardens, as well as fruit and vegetable patches.

There is only one hotel, [and] two stores kept by Messrs. F.J. Wolfe and W. Mountney, respectively… Strange to say, there is no blacksmith’s shop to be seen in the town…The Post and Telegraph Office is in charge of Miss Bomford…. The public hall, a suitable building for the purposes to which it is applied, was erected with money raised by donations from the public, and held in trust by a committee. It is used for meetings, entertainments, and services are held in it by the Church of England and Methodist denominations”.

After the turn of the century both Anglican and Catholic communities began to fundraise to establish churches in the township. The Catholics opened a church in early 1911 and the Anglicans followed suit opening a church in 1912. A Catholic Sunday school had been established in 1910 and this may have provided the momentum to establish a church for the small Catholic community. In November 1910 a report in Scottsdale’s North East Advertiser notes that the “Roman Catholic Church is now in the course of construction, and will soon be ready for service”. However, no press report of its opening or consecration survives.

There is very little general information about St Anthony’s over the short 30 years of its existence. Newspaper reports from the time describe fundraising activities and bazaars which first appear from 1907. A few exerts from these reports are included below to provide a flavour of the Catholic community in the township. They reveal communal cooperation between the denominations and small isolated communities overcoming the barrier of distance to attend social gatherings. Typically, it was the women who were the drivers of fundraising efforts to provide facilities for Pioneer's religious community.

"A successful bazaar in aid of the Catholic Church Building fund was held at Pioneer on Friday and Saturday nights. …The bazaar was opened by Mr C. Ryan. Both Mr Ryan and Mrs Ryan, though non-Catholics gave the committee every assistance. Mrs Ryan especially hard and went to no end of trouble to make the function a success. Father Travers, the parish priest, in thanking the people, more particularly the non-Catholic people, for their sympathetic cooperation and help, expressed his sincere appreciation of the Ryan’s broad minded and philanthropic characters. The Catholic community in the district is very small, and without the assistance of the non-Catholic friends a bazaar would be an utter impossibility…”

On Easter Monday night a Concert and Dance was held in the Pioneer Hall, in aid of the Roman Catholic parish motor car. The hall was crowded, many visitors being present from Derby, Moorina and Winnaleah. The concert, which reflects great credit on the organiser, Miss Ivy Apted, started at 8.30 sharp, Rev Father Barry acted as chairman….”

A very successful mission was given by Rev. Father Macken (Malvern, Vic.), and Father Fitzgerald (Hobart) on Friday and Saturday at St. Anthony’s Catholic church. It was very gratifying to note that every Catholic at Pioneer attended, and all approached the Sacraments of holy communion at the early Mass, which was held at 6 o’clock on Saturday morning”.

By the 1940’s a decline in mining activity in Northeast Tasmania took its toll on rural communities. In February 1947 the Launceston Examiner reported on the closure of St Anthony’s and its removal to Launceston:

“A proposal is being worked out for the removal of the church at Pioneer to St Leonards and its re-erection on church grounds there. Owing to a slump in the mining industry at Pioneer the need for a church there has declined… It is expected that a start will be made on the removal in February, Rev. Father V. Shelverton, parish priest of Derby, has given outstanding service in regard to the project”.
St Anthony’s was resurrected as the Holy Family Church. It still stands at St Leonards; however it has since taken on a third life as a Ukrainian Catholic Church. 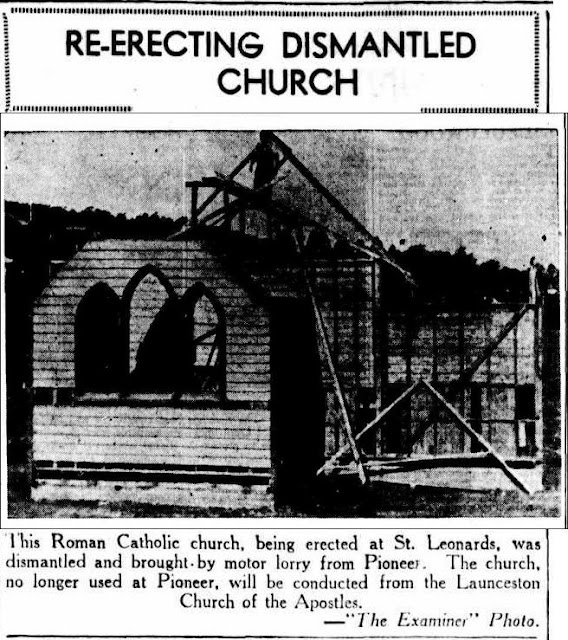