- November 02, 2018
The settlement of Pontville is contiguous with the town of Brighton, established in 1821 by Governor Macquarie as a location for military barracks. The origin of the name Pontville is unclear but it literally translates from the French as 'bridge town’, which relates to the bridge over the Jordan River.

The first Anglican services at Pontville were held in 1829 in a stable adjoining the military barracks. In 1839 a public meeting was convened where it was decided to establish a subscription list to raise funds for a Pontville church. Among the list of 94 subscribers is an unusual entry for £120 titled “Dog Money”, representing the donation of dog licences collected by the assistant magistrate.

By mid 1840 considerable progress was made with the church’s construction. In June the correspondent for Hobart Town Courier reported:

“The town of Pontville is growing to the extent of a few houses, and there is a church upon the hill, the front of which, as now seen, is by far the handsomest design of any building in the island. It is built of the beautiful white stone abounding in the vicinity, which very much increases its effect. The door which opens into the church is supported by two columns, but there is a stone screen with a vaulted archway exposing this, and on each side of the screen are little arched columns reaching along the front. These small pillars are unequal at the base, but the ensemble presents a very pretty and pleasing picture, and the architectural design displays great chasteness, as well as elegance of conception”.


The unusual Romanesque style church was built to a design by the convict architect James Blackburn*. The cost of the building was approximately £1300. The foundation stone was laid by the Governor Sir John Franklin and the building was constructed by Joseph Moir, probably better known for his construction of the landmark Taroona Shot Tower. The church was dedicated in February 1841 by Archdeacon William Hutchins (in whose memory Hutchins School was later founded). However, owing to trouble with the Crown Solicitor over the title deeds, it was not consecrated until 12 March 1884. The Mercury reported on this ceremony which was conducted by Bishop Sandford:

“The incumbent (the Rev. J. K. Wilmer) in a few words referred to the previous history of the church, and the reason why it had not been consecrated before, and congratulating the inhabitants of the township on the happy solution of all difficulties, which had at length brought the Bishop among them, invited His Lordship to address a few remarks to the people. His Lordship, in an interesting speech, congratulated the parishioners upon the fresh and neat appearance of their church, which, though erected in 1841, still retained a remarkably well preserved appearance….”

Despite its unusual and striking appearance, St Mark’s has an unremarkable history. However, there are two incidents relating to the church that are worth relating. The first is about an incident of theft and vandalism at the church in the 1850’s and the second concerns Easter candles that became the centre of a controversy over ‘ritualism’ in the Anglican Church.

THEFT FROM THE CHURCH

The following report appeared in the Cornwall Chronicle in April 1856:

"A Reward of £10 and a conditional pardon is offered by the Government to any prisoner of the Crown who will give information of the parties who sacrilegiously entered St. Mark's Church at Pontville, some time between the 16th and 20th ultimo. The harmonium was damaged by the scoundrels, and some injuries were also maliciously done to the building. The Churchwardens offer, in addition to the above sum, a further reward of £10, and it is to be hoped that the intending plunderers of the Sacramental plate may soon be discovered".

A sum of £20 was a significant amount of money for the time, probably half a year’s wages for an agricultural labourer. Despite the sum offered I have not come across any subsequent reports about the theft or arrest of the ‘scoundrels’.

The second incident, occurring in April 1900, relates to accusations of ‘ritualism’ conducted at St Mark’s. From a modern perspective the incident now seems trivial but it was an issue reported widely in Tasmania at the time and was the source of considerable correspondence in the press. Essentially it was part of wider and ongoing agitation against Bishop Montgomery who was “bedevilled by narrow-minded Evangelical criticism concerning ritualism, confession and prayers for the dead”. What may be termed ‘The ‘Captain de Hoghton’ incident’, is too complex to detail here but I have included a report published in The Mercury and have briefly summarised the outcome:

“Recent occurrences in this parish indicate that disturbances akin to those we read of as having occurred in some of the churches in the old country, are likely to be perpetuated in Tasmania, unless a firm stand be taken by the church authorities. On the evening of Sunday, April 15, Captain de Hoghton, church warden of St Mark's and lay reader conducting the service for that evening, saw fit to remove from the retable of the church some extra candles which, according to the custom prevailing in the church, were placed there as an embellishment to the Easter decorations. This was reported to the Bishop, who ordered the candles to be replaced for the following Sunday, the "octavo" of the festival Sunday last, 22nd inst. On that evening the Rector, the Rev. Mr Hughes, whom no one could accuse of being a Ritualist, preached and briefly referred to what had been done the previous Sunday. In the course of his address he spoke in most kindly and grateful terms of the Captain's services refraining from rebuke, or even criticism of his conduct, and expressing nothing but regret for the action which compelled comment from the pulpit. The relations and mutual responsibilities of clergy and churchwardens were clearly explained and the Rector clearly demonstrated that the burning candles had no significance whatsoever, and were intended simply to aid the decorations, and light the chancel.

At the close of his address there occurred an incident; probably unprecedented in Tasmania. As the Rector passed from the pulpit to tho altar rails Captain de Hoghton rose from his seat, went into the aisle, and said in a clear voice distinctly heard all through the church; "Mr Rector, I deliberately charge you with having suppressed the truth.” An unexpected inrush of the proverbial bombshell could hardly have excited greater consternation among the congregation. But the Rector stood unmoved and calmly finished the service.

Folk collected in little groups outside and on the Rector s appearance greeted him with hearty handgrips, and fervent expressions of sympathy. So far the other churchwardens have shown no sign and pertinent comments are freely bandied about as to what might have happened had an outsider done this thing. A meeting of the parishioners is convened for next Saturday evening to consider what should be done in reference to this extraordinary and most regrettable occurrence”.

Following the confrontation a large and heated parish meeting was held on the 28th of April and following this Bishop Montgomery appointed a commission to investigate the incident. The commission found that the placement of the candles had been a practice at St Mark’s for many years and was not an attempt to introduce ‘Roman Catholic ritual’. Reverend Geoffrey Stephens, writing about Bishop Montgomery notes that:

“Churchmanship disputes in the 19th century were a feature of Anglican life everywhere, but in Tasmania they seemed to take on a particularly virulent tone…. Unfortunately they were a prominent feature of his episcopate. Captain de Hoghton, a Church Warden from Pontville, and the Rev. H.C. Wisdom, a Kensitite and curate of St George’s Battery Point, were unrelenting in their attacks on anything they deemed to be Roman. Montgomery always sided with the Churchmen, and detested the division which the Kensitites were causing within his diocese”.

St Mark’s has recently celebrated 175 years of services and still has a fresh and neat appearance. The church has a sizeable cemetery, which together the church make the site one of considerable significance in Tasmania’s colonial history.

* See the illustration below which reveals a remarkable similarity between James Blackburn's design and that of an earlier design by architect Benjamin Ferrey. 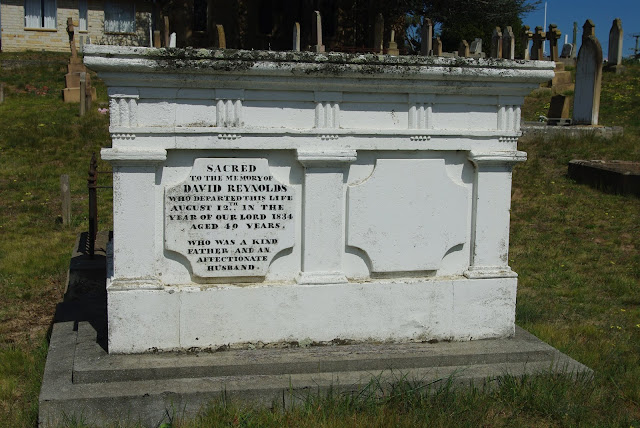 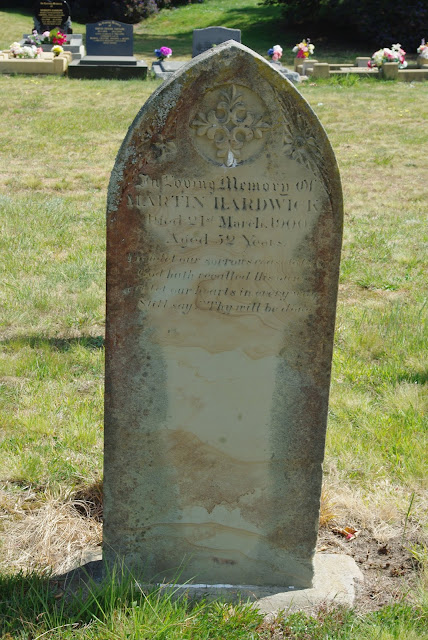 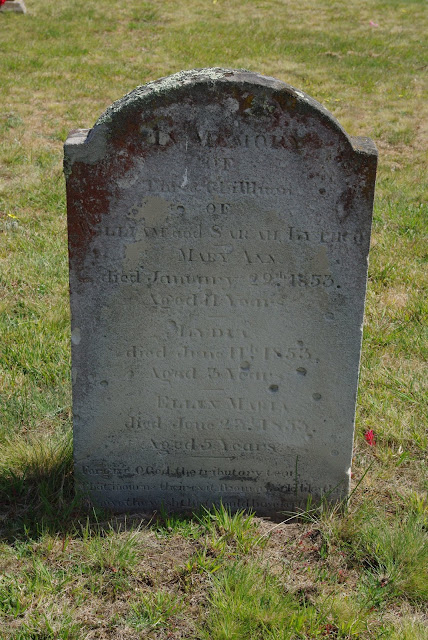 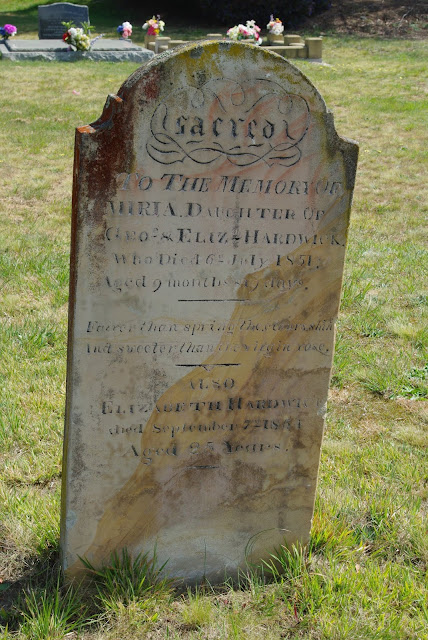 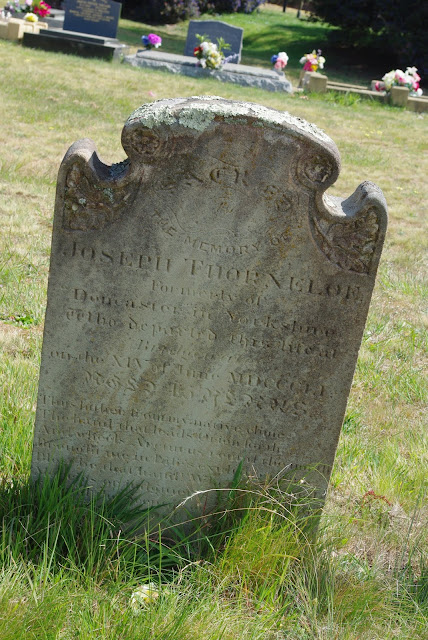 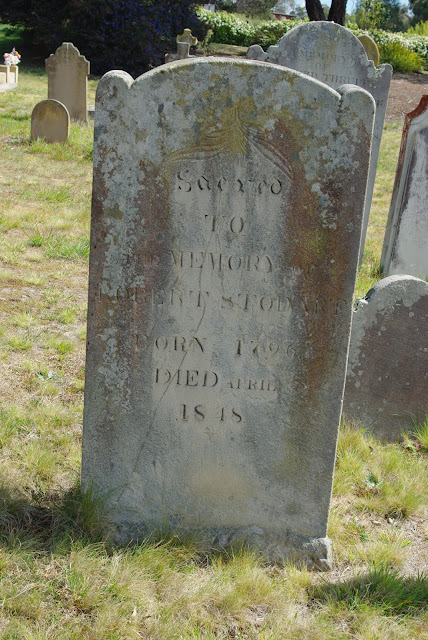 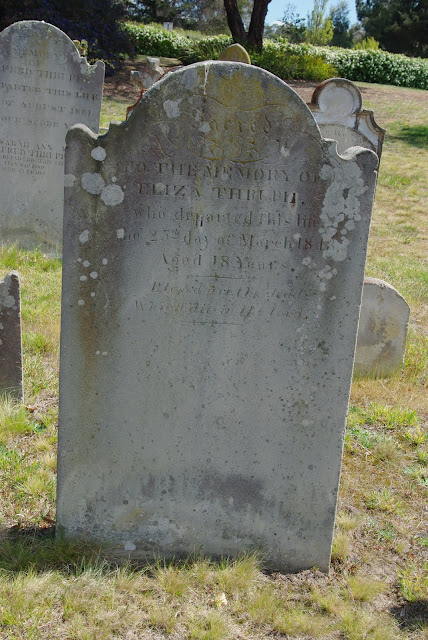 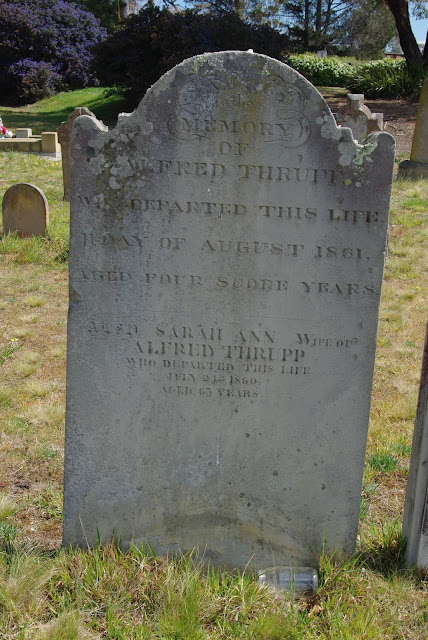 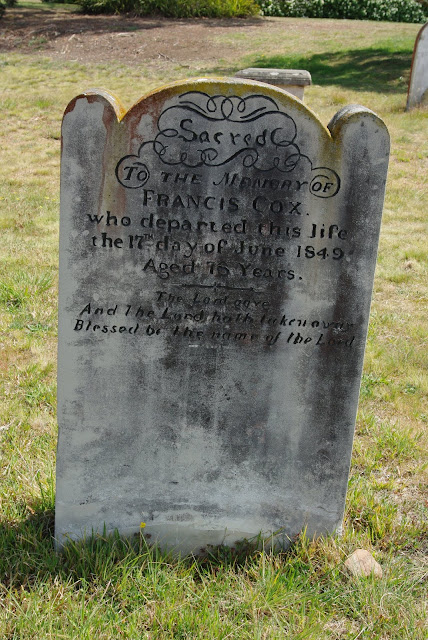 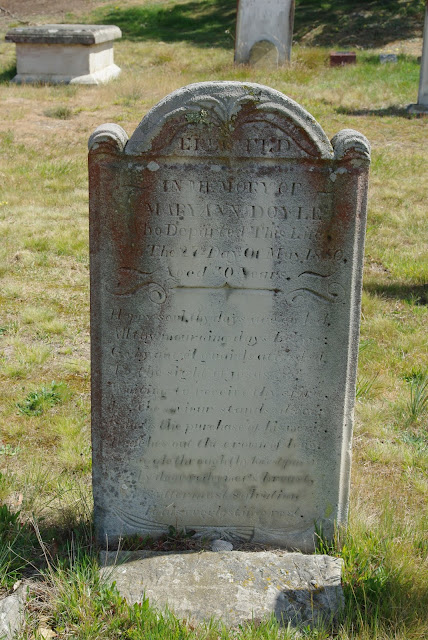 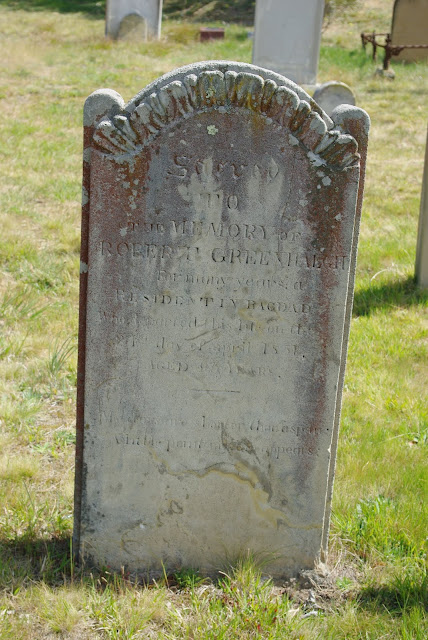 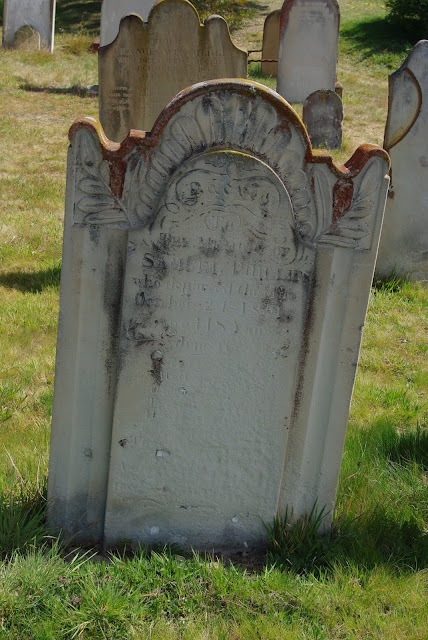 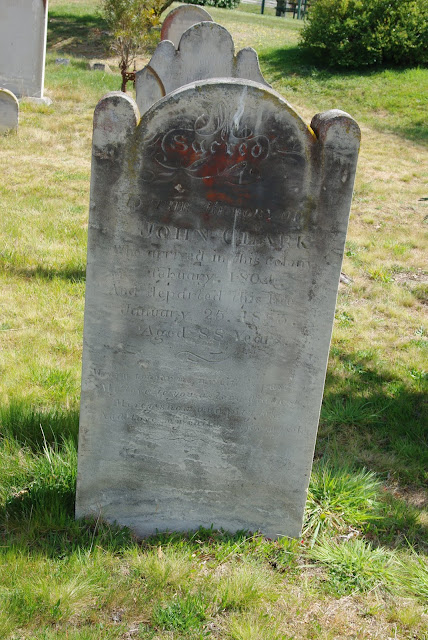 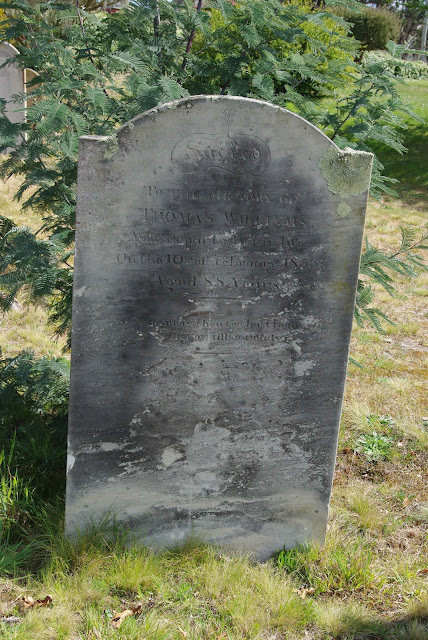 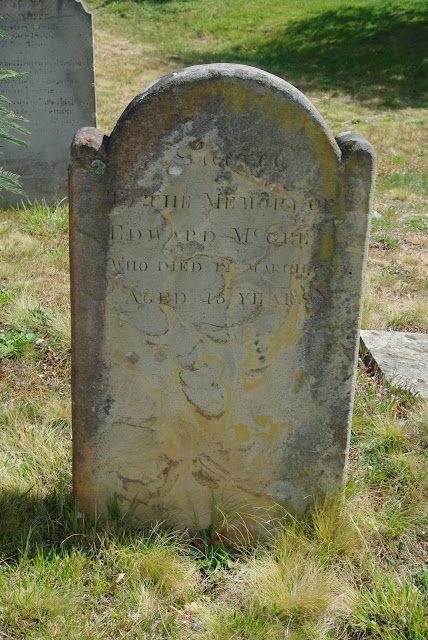