No. 277 - The Former Wesleyan Methodist Chapel at Ross - 'Wilfully Disfigured'

- November 08, 2018
The first recorded Methodist service at Ross was held in May 1832 and by 1836 a Methodist society had been formed. In 1838 a chapel was built with the foundation stone laid at a ceremony on a site at the intersection of High Street and Bond Street. There is a brief reference to this in The Hobart Town Courier:

“The foundation stone of a new Wesleyan Chapel was laid at Ross Bridge on Monday last, by B. Horne, Esq., J. P.   A very considerable number of persons are said to have been present on the occasion, to whom an appropriate address was delivered by the Rev. B. Hurst”.

The chapel opened for service on Friday 27 May 1839 with a sermon by John Waterhouse of Hobart. The building was a stone structure built in the classical style with two pillars on either side of the entrance door which had a pediment over a small portico.

By the 1870’s the chapel was found to be no longer adequate and in 1885 a new church was built and opened at the summit of the hill at the southern end of Church Street.

The fate of the old Chapel

The chapel continued to be used for a time but gradually fell into a state of disrepair. In 1888 considerations were given to selling it for the purpose of a public hall and reading room. This did not eventuate for in 1908 it was reported that the chapel and the graveyard behind it had become a target of “larrikins”:

“One of the stewards of the Ross Methodist Church called attention to the manner in which the front door pillars, and pediment at the main entrance of the old Methodist Church had been bombarded with stones. The surface of these is literally covered with deep dents caused by stones being thrown against them. The door was also broken open, and a cedar screen, which forms a porch inside the doorway, was also used as a target. At the back of the building are several graves with tombstones, and one of these, a fairly large stone, was deliberately thrown over and broken in two… it is a pity to see it wilfully disfigured. Some of the rising generation here are getting out of hand, and steps will have to be taken to restrain them and punish them for larrikinism”.

In 1932 the chapel was demolished but its entrance pillars were salvaged to create a monument to the pioneers of Methodism at Ross. In 1935, at the 50th jubilee celebrations of the Methodist church, a ‘pioneer monument’ was erected at the foot of the church tower. If one looks closely, the ‘dents’ caused by ‘larrikins’ can still be seen on the pillars. 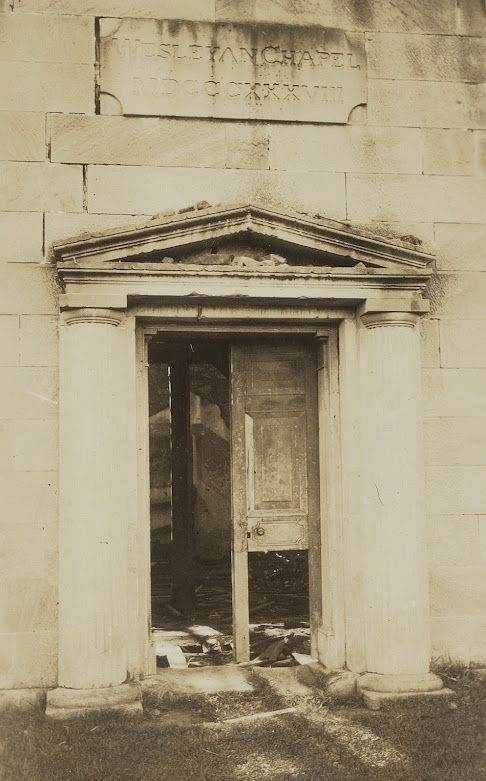 A photo of the chapel entrance before it was demolished. (Libraries Tasmania)