- December 03, 2018
The first Anglican church at Kempton, or Green Ponds as it was originally called, was a timber church called St Marks’.  In Dr James Ross’ Hobart Town Almanac of 1829 there is a reference to a “neat little church in the process of erection, and now nearly finished, built chiefly at the expense of the inhabitants”. The church was dedicated to St Mark’s and consecrated by Archdeacon Broughton in April 1830 with Lt.- Governor George Arthur in attendance.

“We have the pleasure to announce to the inhabitants of the Green Ponds and its neighbourhood, that the Venerable Archdeacon has fixed on Thursday next the 8th instant, as the day on which he will consecrate the Chapel at the Green Ponds, a ceremony so highly impressive and interesting in itself, especially in a new country like this that we doubt not a very numerous congregation will be assembled”.

By the late 1830’s St. Mark’s was found to be no longer adequate for needs of the Green Ponds Anglican community and in September 1838 specifications for a new church were drawn up and tenders called for its erection in January 1839. In March 1839, the ceremonial laying of the foundation-stone was reported by The Colonial Record:

“On Tuesday last, the foundation-stone of the proposed church in this district was laid by Sir John Franklin. His Excellency arrived at Green Ponds about five o'clock in the day, when be was met by several gentlemen of the district, among whom were Messrs. Kemp, Franks, Gorringe, Clarke, and others, and by the Rev. Messrs. Hutchins, Beazley, and Bishton. Prayers, appropriate to the ceremony of laying the stone, were offered by Mr. Bishton, an address distinguished as well for its diction as its suitableness, was made by Mr. Hutchins, and His Excellency closed the whole, in a speech expressive of his deep interest in the undertaking. We congratulate the inhabitants of Green Ponds and its vicinity, on the religious advantages they now possess. The Episcopalian edifice will probably be completed within eight months time”.

The church probably opened by early 1840 although there is no surviving published record of this. There is also no explanation as to why it was dedicated to St Mary and not St Mark. However, the erection of St Mark’s at nearby Pontville in 1838 may have been the reason for this in order to avoid confusing the two churches.

Interpretation signage outside St Mary’s provides some information about the early development of the church. This states:

“Work on the present church began in 1840, taking a number of years to complete. Land and money towards the completion of the church were provided by Joseph Johnson, a wealthy emancipated convict who had large landholdings in Green Ponds. The church is believed to have been designed by the famous convict architect, James Blackburn. In the first year of construction, some of the “Canadian Rebels” from the Green Ponds Probation Station were employed erecting the stonework”.

Clearly, the construction of the church was begun in March 1839 and not 1840, which is the year that it was probably opened. A Colonial Audit Office report published in the Cornwall Chronicle in December 1840 indicates that Reverend George Otter, the first minister, “received payment for the erection of a church at Green Ponds”. While the Midlands Anglican Church website states that church was completed in 1846 it was probably opened on in 1840 as previously suggested but only fully completed and consecrated in the year 'officially' given.

Signage outside the church also refers to Reverend Trollope who was associated with the church in the 1850’s:

“By the 1850’s the incumbent minister was the Rev William Trollope, nephew of the noted author, Anthony Trollope, who made himself very unpopular by preaching about the chronic state of Sabbath day drunkenness in Green Ponds”.

William Trollope was in fact an uncle of Anthony Trollope. William Trollope was born in 1798 and arrived in Australia in 1849. In 1852 he established a ‘Grammar School’ at Oatlands and took up the position of minister at Green Pond’s some time after this. Reverend Trollope’ unpopularity extended beyond his preaching about drunkenness. He a controversial figure, often writing to The Courier under the pseudonym ‘Junius Tasmaniensis’. In 1859 Trollope had a very public clash with Church Warden Mr. G.A. Kemp which led to the parishioners of St Mary’s abandoning the church and the circulation of a petition demanding Trollope’s removal. What began as a clash over receipts became a demeaning affair for all involved. In an editorial, The Hobart Mercury saw the Trollope incident as symptomatic of wider problems in the church. This is worth quoting at length as it still resonates today:

"…The unhappy dissensions which have of late existed in various districts of the Colony between the clergy of the Established Church and the Laity ought, for the sake of religion itself, to be brought to a close. These deplorable schisms are bringing shame and reproach upon the name of religion; ….Take this very case at Green Ponds, and there are many very similar cases unhappily to be found, and what do we find? The Church of England deserted; its clergyman despised and openly accused by his own parishioners of retarding the cause he has undertaken to advance ; and a petition unanimously adopted, at a public meeting praying for his removal. This is in the Church of England. And, upon whom are we to charge the odium of these things? Does it rest with the laity or with the the pastor ? In the same district, and within a few yards of the deserted porch of the Episcopalian Church, we see a Dissenting Chapel crowded to excess whenever its doors are opened; its Minister respected, not only by his own congregation but by those who belong to other communions; and the cause of religion progressing. We hear of no strife, no dissensions amongst there. They live in the most perfect harmony, and represent, so far as the frailty of our nature  will admit of their representing, a true picture of a Christian Church. It is notorious that the members of the Church of England have been compelled to take refuge from the bitter animosities and contentions which have so long destroyed the peace of their own Church, in the calm serenity which reigns in these dissenting communions….

How can the Church of England flourish under such paralysing circumstances? What must be the character of a Minister for whose removal every member of his Church petitions? The complaints against Mr. Trollope have spread themselves over a series of years. We have long been familiar with them. And yet the Bishop either cannot or will not give heed to those complaints. ….There must be something radically wrong in her internal government, or such unseemly and irreligious proceedings as have lately taken place at Green Ponds could never have occurred…..It is such semi-political parsons as Mr. Trollope, who bring disgrace upon the Church of England, and who drive into the arms of dissent, her staunchest adherents….”

While the politics of the Church and clergy were blamed for the empty pews at St Mary’s, the apathy of the Anglican community was equally problematic. In 1883, the Green Ponds correspondent for The Tasmanian wrote:

“I mentioned recently that we have three places of worship in Green Ponds. They are the Church of England, Independent, and Presbyterian. The Church of England is a very substantial stone building capable of holding several hundreds of people, but, alas! cui bono? The congregation has evidently decreased since its erection, else the church would not have been of such dimensions. Now we see a congregation of 10, 20, and 30, 60 forming an exceedingly good congregation. We ask— why is this this? Episcopalianism evidently is now not the religion of the leading sect in Green Ponds. There seems to be great apathy among the Anglicans here. They prefer the evening to the morning; they muster strong only on alternate Sundays. There does not seem to be that healthy “family-going” to matins and evensong that we have seen in other towns. The bell tolls certainly, but unaccompanied by a sympathetic turning out of fathers and children. A stranger, I am sure, would say we were just making a start in the town, till he may see the edifice, then, he would say we had gone down to as low a pitch as we could go…”.

Almost 140 years later the ‘pitch’ has indeed gone much lower. In 2018, St Mary’s is on the verge of closure. Ironically, St Mary’s will be the last church to close at Kempton. The Presbyterian, Congregational and Catholic churches have all shut. For the Anglicans, the failure of both the ‘Church’ and the ‘people’ have brought this church to its knees after a history of almost 190 years. Cui bono?

The Historic Cemetery at St Mary's 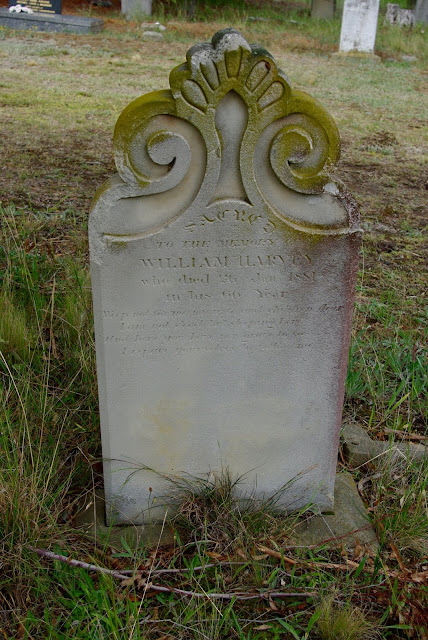 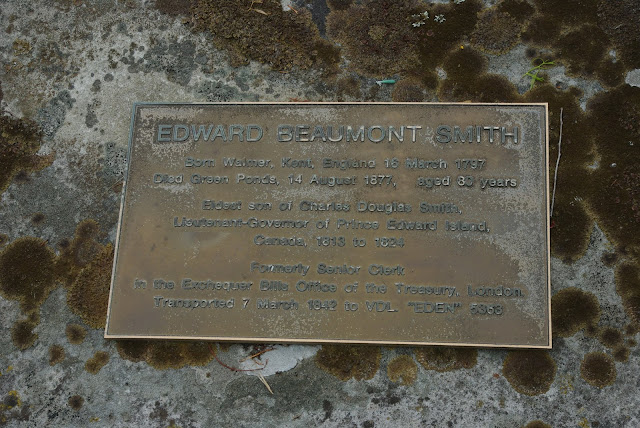 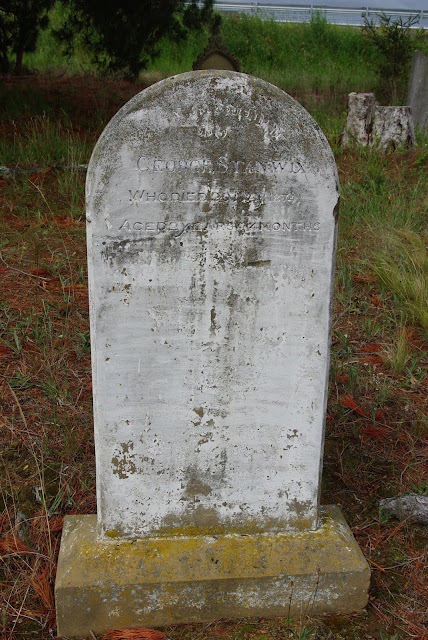 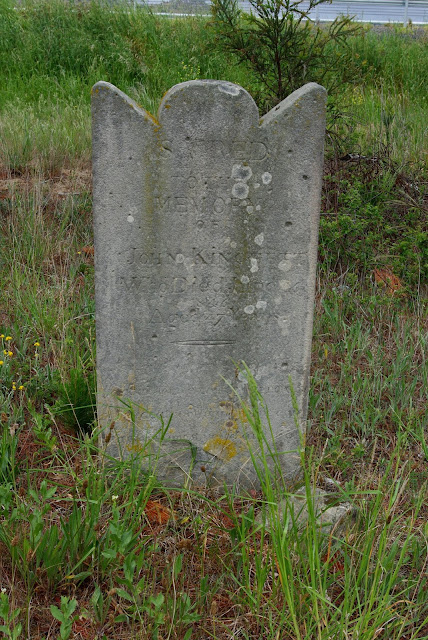 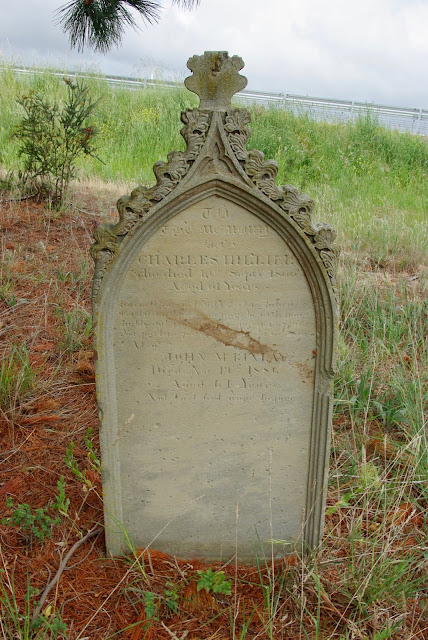 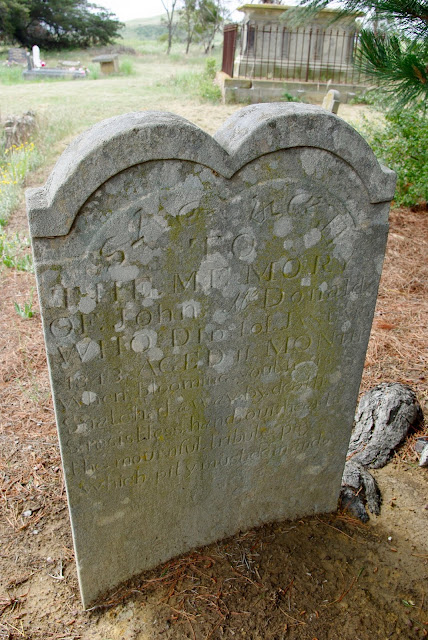 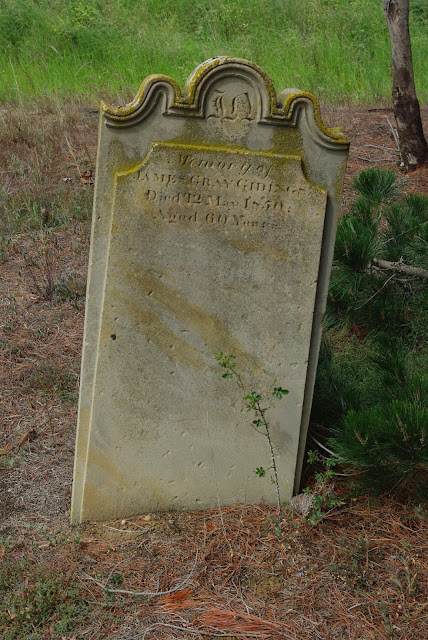 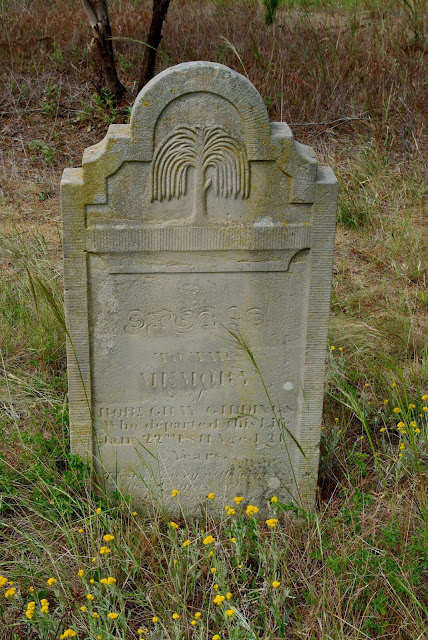 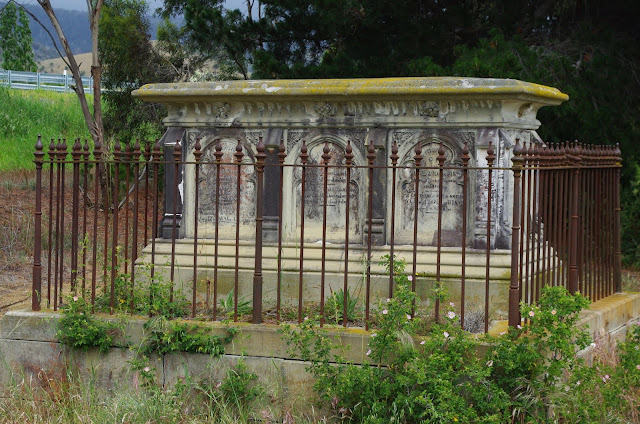 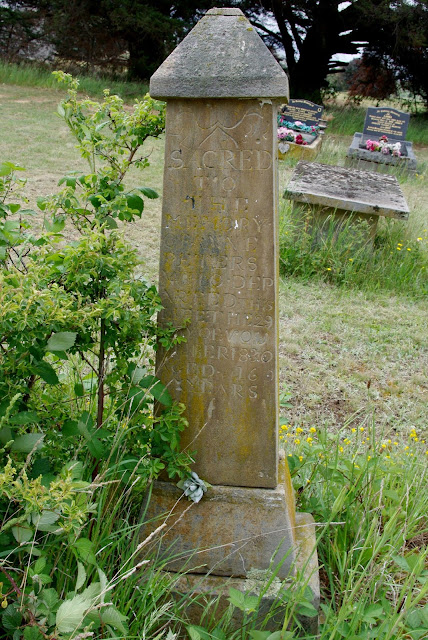 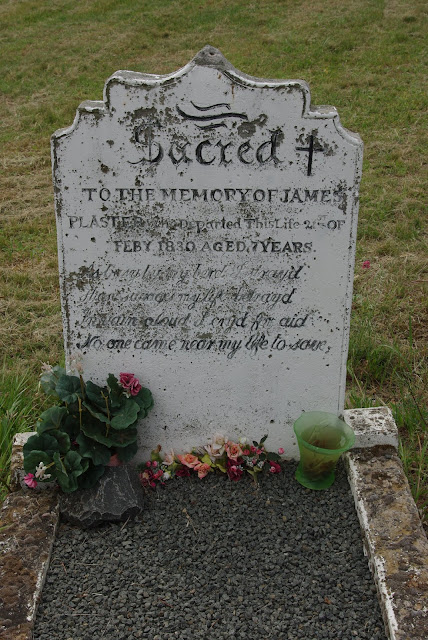 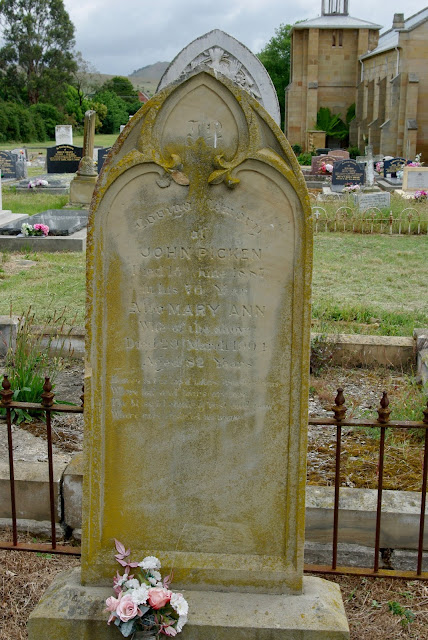 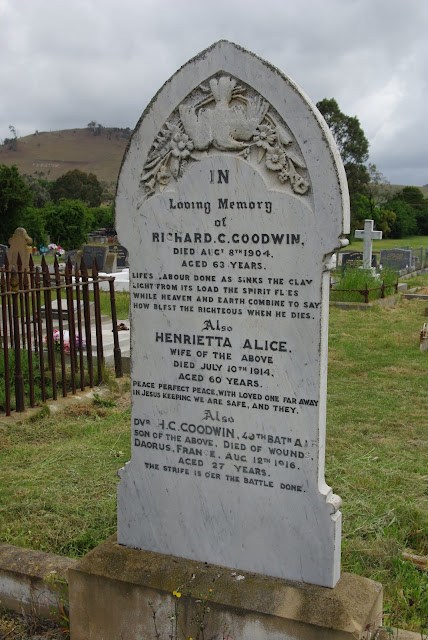 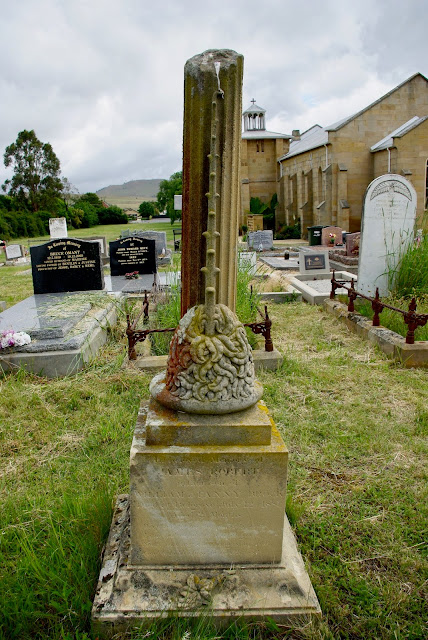 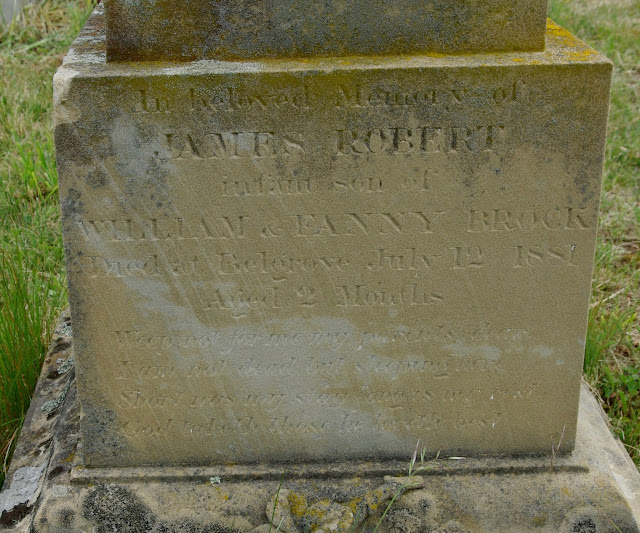 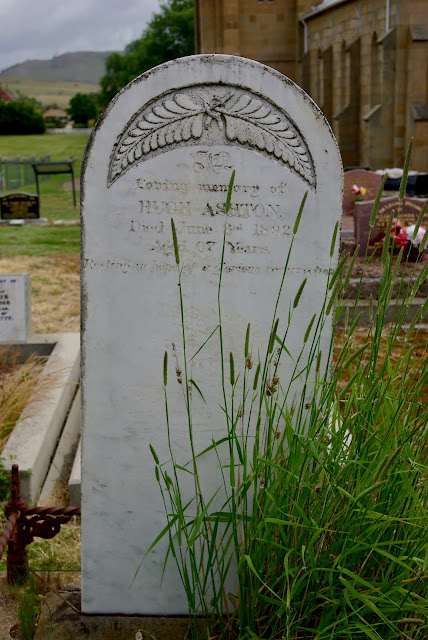