- December 05, 2018
The township of Lefroy lies 15 km east of George Town on the north east coast of Tasmania. Lefroy is now a virtual ghost town having at its peak a population of about 5000 that has now declined to 77 (2016 Census).

It was originally called Nine Mile Springs, a reference to the distance to George Town and the existence of springs in the vicinity. The George Town and District Historical Society’s booklet on Lefroy provides the following information:

“The settlement moved to its present site in the mid 1870s following the development of the Native Youth reef. Known by the locals as Excelsior, after the original mine on the site, it was named Lefroy in 1881 after the visit by the Acting Governor, Sir Henry Lefroy. It was a bustling town which is said to have contained 5,000 people in its peak boom period of 1890-95. It was the fourth largest town in Tasmania. It had a race track, rifle club, cricket club and brass band. There were six hotels, three churches, a state and private grammar school, a masonic lodge and mechanics institute. The town had several shops, two butchers and a cordial factory. In 1907 the headquarters of the George Town Municipality was located there, remaining there until the 1930s. Once commercial mining ceased Lefroy slowly declined, its school and last church closing in 1954. Many of the houses were removed to George Town and Beaconsfield”.

Before the establishment of an Anglican church at Lefroy in 1881, services were conducted by Reverend John Fereday from St Mary Magdalene at George Town. In 1872, Fereday met a tragic death on the road to George Town, returning from a service at Lefroy:

“The Ven. Archdeacon Browne and Mr Fereday left Nine Mile Springs about 4 p.m. on Tuesday, in a gig to return to George Town. As Mr Fereday was very near sighted the Archdeacon undertook to drive. They had got near to Quin's farm, when a wheel of the gig came in contact with one of the numerous stumps, which render driving on the portion of the George Town Road from within two or three miles this side the Mount so perilous. The collision was so forcible that the Archdeacon was thrown violently out, the reins were jerked out of his hand, and the horse taking fright bolted with Mr Fereday in the gig. When the Archdeacon was able to get up from where he was thrown, he could see neither horse, gig, nor Mr Fereday. He ran on towards George Town, and at last found Mr Fereday lying on the road bleeding, and quite unconscious”.

Fereday never regained consciousness and his death left Lefroy without an Anglican minister for 8 years. The absence of a minister may have provided the catalyst for building a church in the town and in August 1880, the foundation stone for St Andrew’s was laid.

The church was completed in the following year and was opened by Bishop Bromby on the 10th of December 1881. The church was described in a report in the Launceston Examiner:

“A neat and substantial wooden structure, lined inside, and painted throughout, and while its cost has been about £500, only £80 of the debt remains on it, the balance having been nearly all collected locally. The committee contemplate not only wiping the debt off shortly, but adding a chancel to the present building”.

Another report from the Hobart Mercury’s Lefroy correspondent provides considerable detail about the opening service and subsequent celebrations. I have included a substantial part of this as it provides a rich insight into life at Lefroy.

“Since my last report we have had a lively time here, on the occasion of opening the new Church of England by our highly esteemed Lord Bishop of Tasmania, Archdeacon Hales accompanying His Lordship. It was announced that morning service was to be held at 11 o'clock. You may wonder at me stating this, Mr. Editor, but allow me to inform you that it is the first morning service held by the Church of England folk at Lefroy for the past eight years. However, the new bell tolled for the worshippers to assemble together, and after a short time the Archdeacon and His Lordship took their seat at the communion table…. In the latter part of his sermon he earnestly entreated the people to
prepare for the Master's coming, stating that He was still calling for them. Very many in the church were weeping, and I trust much good was done.

At half-past 2 in the afternoon His Lordship addressed the Sunday school children, and by way of text explained to them the meaning of the words, sowing the seed of eternal life in their hearts. The children listened attentively to the explanation, which was plain and simple. Holy Baptism was administered to the infant daughter of Mr. C. Tregurths, of George Town…

On the morrow, being Monday, a tea was held at half-put 4 o'clock, the room being crowded to excess. Before partaking His Lordship pronounced the grace, and justice was done to the good things prepared by Mr. W.B. Dean, of Launceston, which I must say were a credit to him, and could not be surpassed for quantity and quality. About six or seven hundred partook of the good things; and after the tea was over the ladies were busily engaged clearing away, and at the same time giving the bachelors some good hints, as they were allowed to take tea by themselves; some good jokes followed, and all seemed to enjoy themselves heartily, and, allow me to state, without a single murmur. At 8 o'clock the sacred concert commenced. His Lordship, who was in the chair, gave an eloquent address at great length; the singing was good, and more especially that of the Welsh singers, who gave entire satisfaction, singing beautifully in their mother tongue.

… I was almost forgetting to state that the Lefroy Brass Band was in attendance, playing some well regulated pieces, and considering the short time they have been practicing they play exceedingly well, His Lordship and Lady, the Archdeacon, and others being highly delighted with the band. The name of our new Church is St. Andrew's”.

By the close of the 19th century, gold mining at Lefroy had passed its peak. The last of the larger mines closed in 1908 and commercial development of the goldfields ended in 1914. With the end of mining the population of the town moved away and the Methodist, Catholic and Anglican churches closed and the buildings were removed. An indication of the size of this former bustling town is its large and beautifully maintained cemetery, where the dead now outnumber the living by a ratio of three to one.

The General Cemetery at Lefroy 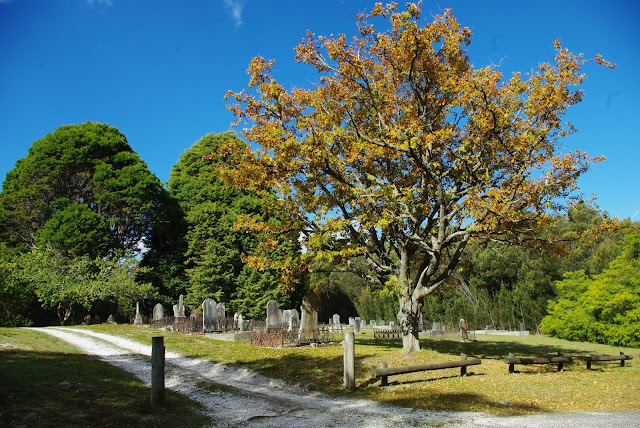 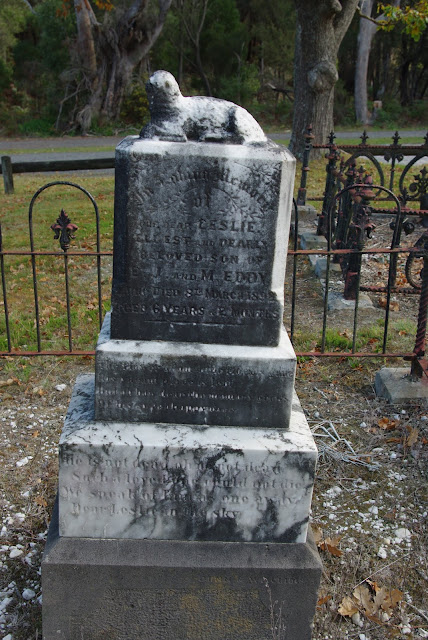 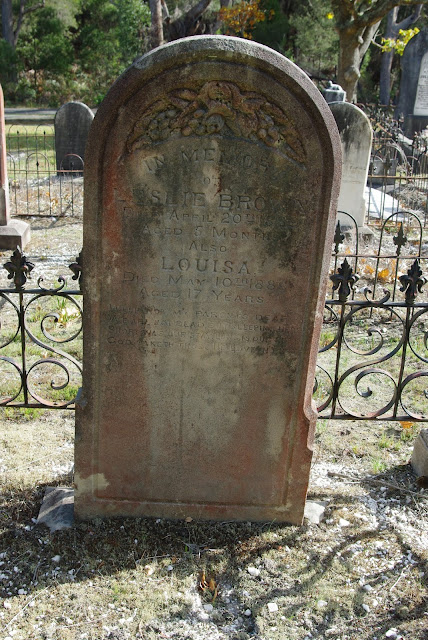 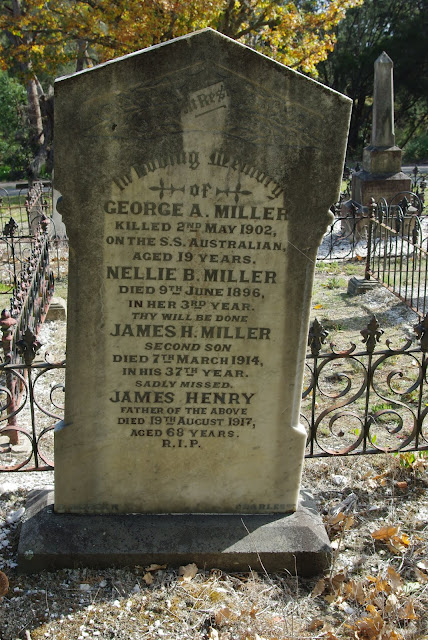 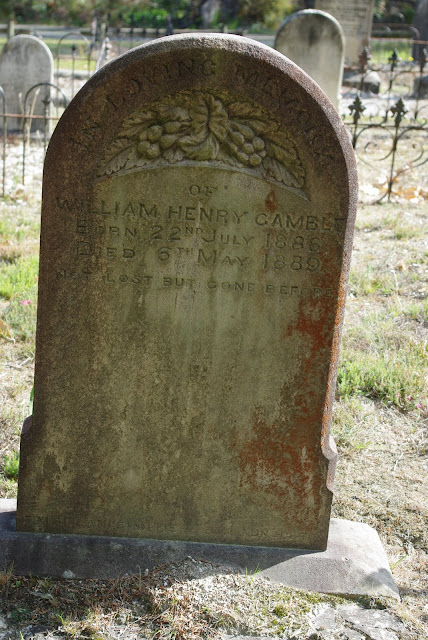 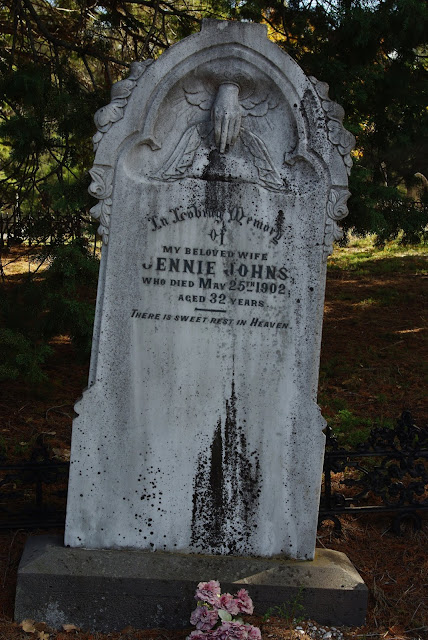 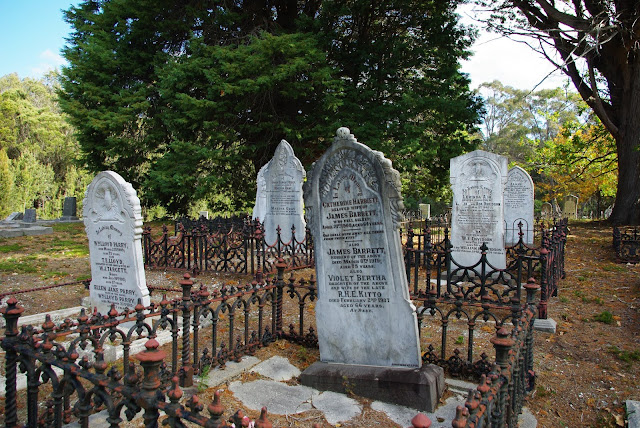 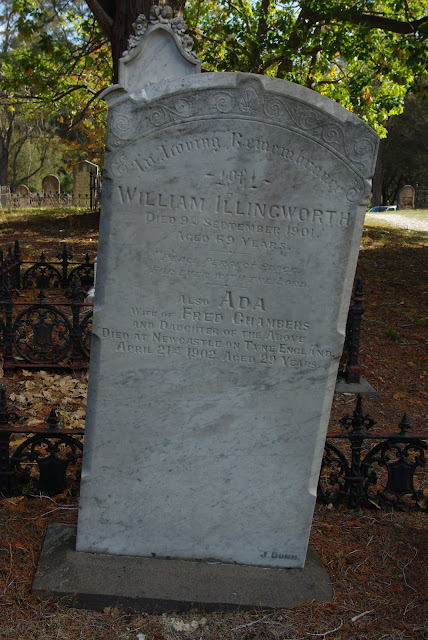 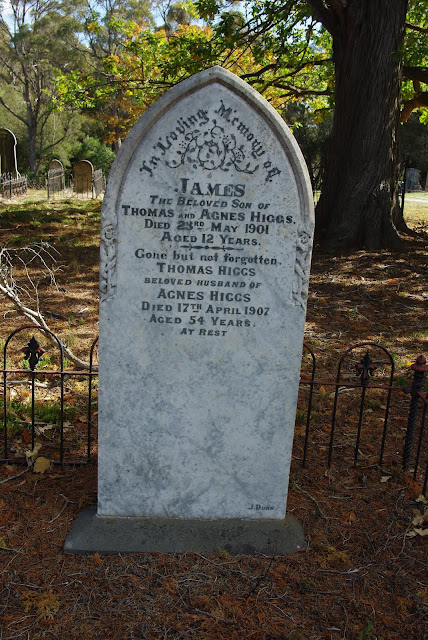 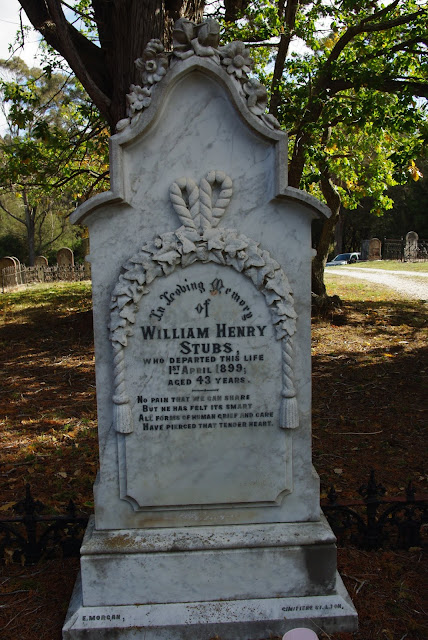 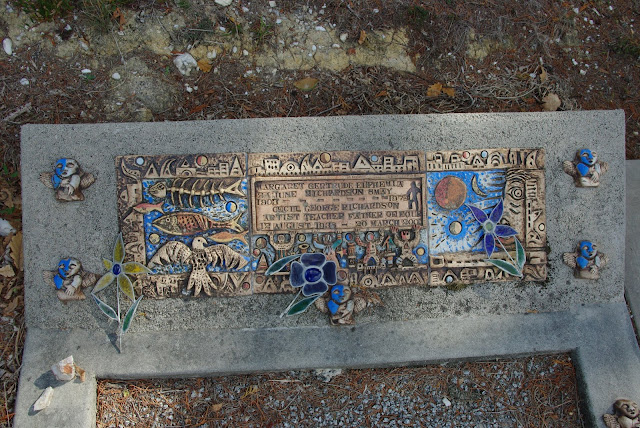 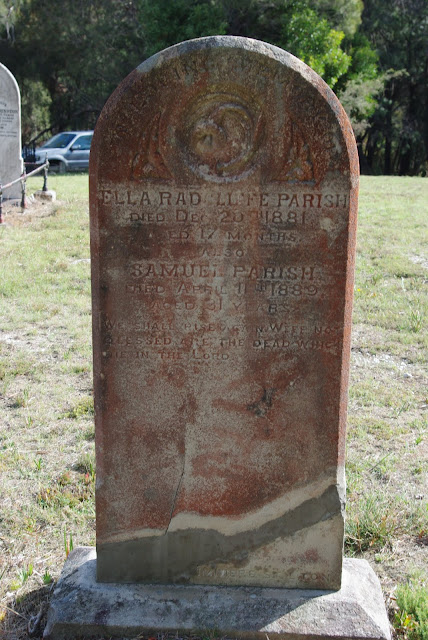 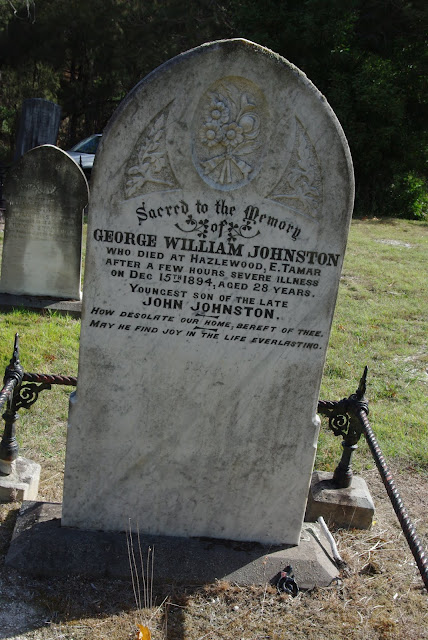 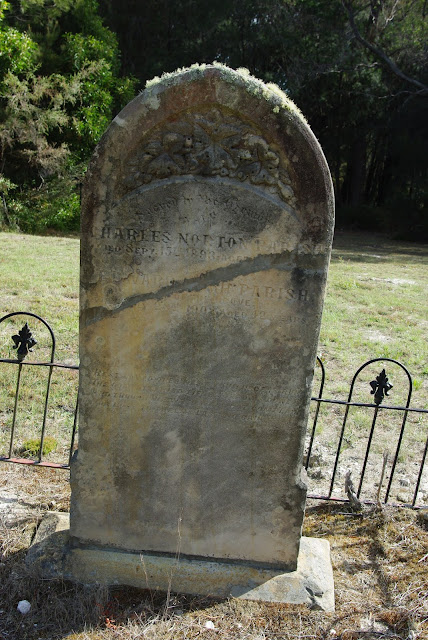 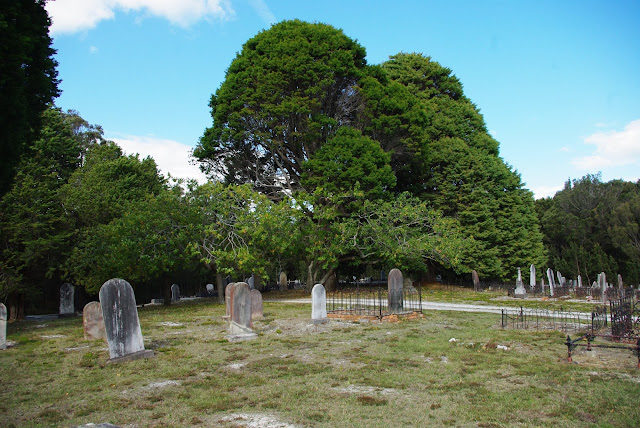 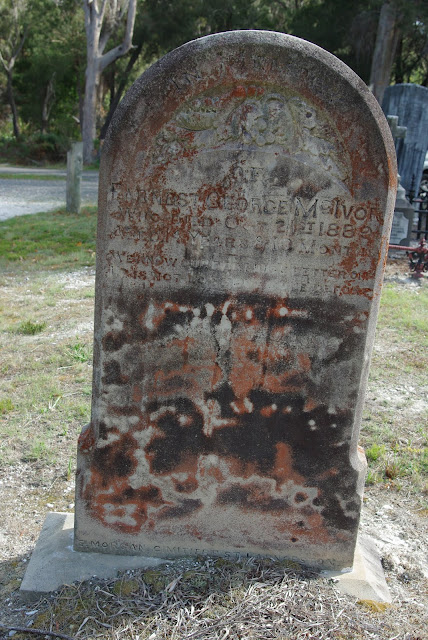 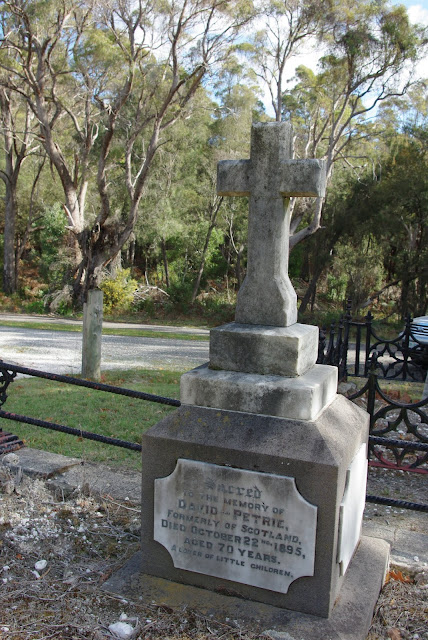