- January 29, 2019
Rowella is a small settlement on the Tamar River about 50km north of Launceston. In 1911 Charles Brady, a devout Anglican and one of the pioneers of the orchard industry in the West Tamar district, bought Waterton Estate with its 1860’s Georgian homestead. This was enlarged by architect Alexander North who changed its appearance to that of a Tudor building which included an attached chapel. The Anglican residents of Rowella and Kayena were to use this chapel for over 30 years.

In 1949, the Roman Catholic Church purchased Waterton Hall to use as a school for girls. The furnishings of the chapel were removed to St Stephens, a small wooden church that was built at Rowella for the Anglican community. Among the items removed from the Waterton chapel were a clamshell font from Papua New Guinea in memory of Sister May Hayman, one of the ‘New Guinea Martyrs’ and a ‘rose window’, a memorial to Alexander North.

St Stephen’s was was consecrated by Bishop Cranswick in June 1950. In the 1980’s St Stephen’s was moved to the Anglican campground at Montgomery Park in Southern Tasmania. When the campground was sold in 2010, Alexander North’s memorial window was removed and installed in the narthex of Holy Trinity Church in Launceston. Alexander North had designed the landmark Holy Trinity Church and had been a parishioner there. St Stephen’s still remains at Montgomery Park. 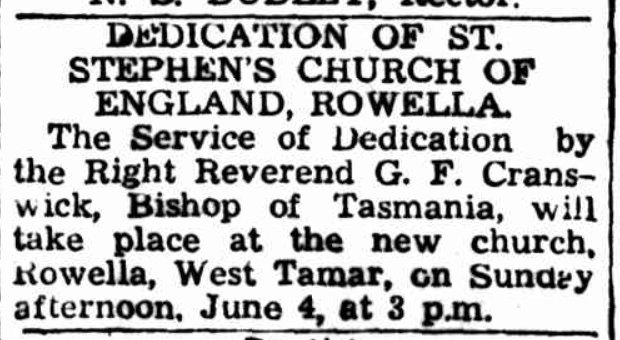