No. 426 - The Methodist Church at Parkham - "A Back to Parkham Festival"

- May 24, 2019
Parkham is a small settlement located about 24 kilometres north of Deloraine. It was once covered in thick bush and became a favourite hideout for the bushranger Matthew Brady and for a time the area was known as Brady's Plains. There were two churches at Parkham; a Wesleyan-Methodist church, established in 1891, and St Alban’s (Anglican) which opened in 1902. Prior to the opening of the Methodist church, the nearest place of worship was at Forest Hall about 8km away.

The Launceston Examiner’s report on the church’s opening in September 1891 contains interesting information about the building and its founders:

“On Sunday, the 13th inst , quite an event took place in this quiet district in the opening of the new Wesleyan Church. Services were conducted in the morning and afternoon by the Rev. W. Wykes of Westbury, who delivered two powerful and soul-stirring discourses. In the afternoon about one hundred persons were packed Inside the building, many coming from a considerable distance to be present on the occasion. The church is built on land given by Mr Joseph Cox, and should prove a benefit to the district and a blessing to the people, there being no other place of worship within four or five miles. Mr and Mrs Cox deserve the sincere thanks of the community for their hearty real and self denial in helping forward the good work. The church was built by Mr J. Thomson, at a cost of about £75, and was opened free of debt. About £12 more will be required to furnish it with comfortable seats. It is hoped the good people of Parkham will appreciate the effort of their Methodist friends to provide them a place of worship, and that they will receive lasting good. The road near the church sadly needs improving as it is almost impassable for both foot and vehicular traffic, many of the residents having to trespass on Mr W. Walker's land in order to reach the church”.

The subsequent recorded history of the church is unremarkable although it did make the headlines for its diamond jubilee celebrations in 1950. By all accounts the celebrations were a huge occasion with former residents of Parkham returning from far and wide. The Advocate reported:

“The Parkham Methodist Church celebrated its diamond jubilee on Sunday with three services. Rev. J. D. Lütge preached at the morning and evening services, and Rev. E. A. Baker, of Launceston, took the afternoon service. There were large congregations at all services. Many people made the occasion a “Back to Parkham" festival. On Monday evening a social was held in St. Alban's Hall”.

“When the seating accommodation became overtaxed during the afternoon many people sat outside in cars and followed the service by a public address system”.

In the post-war years all rural churches suffered a steady decline as a result of dwindling populations. The Parkham Methodist church was no exception and although services continued for another 20 years, it closed 1973 and was subsequently sold. The fate of the building is not known but it was probably removed and may still exist in some form in the area. 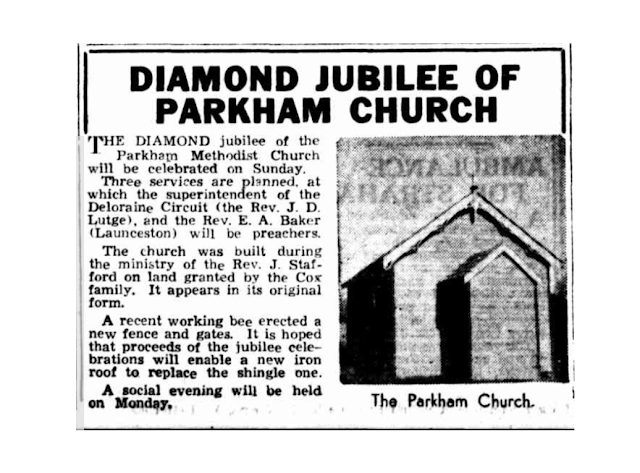