No. 429 - St Peter's Anglican Church at Weldborough - "One Could Not Die in a Better Place"

- May 28, 2019
Weldborough is a former tin mining town on the Tasman Highway about 50 kilometres east of Scottsdale. Established in the 1870’s, Weldborough was initially called Thomas Plains. The discovery of tin gave rise to a mining boom and by the 1880’s the small settlement had become a thriving town. It was renamed Weldborough, after Sir Frederick Aloysius Weld, who was Governor of Tasmania from 1875-1880. By the 1890s it was estimated there were between 800-1200 Chinese working in the local mines, the largest Chinese community on any tin field in Australia.

Until the 1890’s Weldborough was without a church although Anglican, Catholic, Methodist and Baptist ‘ministers’ made infrequent appearances at the settlement. In 1890 a report by the local correspondent for the Launceston Examiner was enthused by a visit by two Baptist preachers:

“We have been stirred up religiously. After having no services for a month we had Church of England last Sunday week in the morning and Wesleyan in the evening. On Wednesday last we had a visit from Pastor Blackie, of Longford, and Paster Walton, of Perth. Like others, they had to walk through mud holes from Moorina in the dark, because the coach stops short there at dusk, and there is no through communication till next morning. Pastor Blackie, an ex-Indian missionary, gave us a lecture on India, illustrated with idols and pictures and maps. It was graphically delivered, well attended, and listened to with wrapt attention. Pastor Walton presided, and the lecturer sang native Indian hymns to the delight of the younger folks especially. On Friday we had a lecture on " Candles,” by the same gentleman, illustrated by candles and lamps, and lights of all sorts and sizes and in all positions. This elocutionary treat was also much appreciated. On Saturday we had a sacred concert by the same gentlemen, assisted by our schoolmaster and his family. The jubilee songs and other pieces were much applauded, and afforded great pleasure to a very respectable audience. Last Sunday, in the morning, Pastor Walton preached to a good congregation. Pastor Blackie delivered a missionary address to a full house in the afternoon, and in the evening preached to a crowded house with great power. The greatest novelty to us of all was a prayer meeting after the service, to which everyone stayed. Altogether the excitements have been of a profitable as well as a pleasant character, and we all wish the Baptist pastors a happy time at George's Bay and St. Mary's on their way home. They leave many pleasant recollections with us, and we hope soon to see them soon…. Once more we return to our quietude, and hope not to be forgotten by the outside world while we send out our tin to the shareholders and smelters and manufactures and consumers, who little know the difficulties contended with in obtaining it”.

A campaign for a church to serve the district was underway by this time. In 1891 in nearby Gould’s Country, a public meeting was held to see what support might be given to a Church of England clergyman for the district. At the meeting a letter was read from the Bishop which stated that: “… if the inhabitants of the district from Scamander to Weldborough could guarantee £100 per year a suitable minister would be provided…”

There is no further record of progress made towards establishing a church at Weldborough apart from a single line contained in a report of the Anglican Synod’s meeting held in April 1894 which notes that a “building (not consecrated) ha[s] been erected at Weldborough”. In the following year an annual report regarding the Anglican ‘Mission to the Chinese” in the north east reveals:

“Mission work commenced on August 23, 1894, when the Rev. Soo Hoo Ten, deacon, and John Yung Choy, evangelist, arrived at Weldborough. On August 26 the first service was held in St Peter’s Church, at which 30 Chinese attended…” *

While St Peter’s was in operation by early 1894, attendance by ministers was infrequent. In December 1896 a report in the Daily Telegraph explains:

“A Church of England service was celebrated on Sunday morning by the Rev. Wyatt, of Scottsdale. The local church was crowded, as It is a long time since a minister visited the township. The Rev. Wyatt is likely to make regular visit”.

Over the next 30 years there is little information about St Peter’s but by the late 1920’s reports about fundraising to establish a new church start to appear in local newspapers. In 1931, one such report in Scottsdale’s North East Advertiser, reveals some detail about the establishment of the first church. Written by the newspaper’s local correspondent at Weldborough, the folksy and entertaining report also explains how a new church was acquired:

“For some years past the people of Weldborough have been striving to raise funds to provide a new church to replace the old “temporary” building which has done service since as far back as 1893. The old church was erected in the days of Rev. Jackson, with funds provided by the people of Pentridge, England, and was built entirely of split timber with an iron roof. It was felt that its life was past, as its safety was doubtful, while some timid souls would not risk attendance on stormy days. In fact, one particularly stormy day, the Rector remarked after service, that there was nothing to fear, as one could not die in a better place nor better occupied. Nevertheless such conditions could not last indefinitely, and the Rector and churchwardens were gravely concerned, because the people were impatient to see the new church at once. With roughly £150 in hand, a way was found out of the difficulty, and now the new church has been dedicated free of debt….”

“It happened one day that Mr Bailey, the esteemed churchwarden, was travelling to a council meeting, when by good fortune for posterity the car reached the old Methodist Church at Lottah, and refused further service until some small requirement of a car’s anatomy had been supplied. In the meantime he engaged in conversation a resident citizen of Lottah, and discovered that the building there - apparently in as sore straits as the Weldborough one - was for sale, so it came about eventually that the Weldborough people bought it for removal….”.

The opening of the recycled St. Peter’s took place on Sunday 1st March 1931. A report of the event appears in the Launceston Examiner:

“Sunday was a red letter day for the congregation at St. Peter's Church, Weldborough. During the past two years a committee of ladies has held a carnival, and several socials to secure funds for a new church, and £160 11s was raised….Tenders were called, and the contractor, Mr. Rodman, was complimented on the manner in which he completed the removal and reconstruction of the church. Three services were held on Sunday by Archdeacon Atkinson. The archdeacon thanked the committee and all who had helped to place the new church in its present position, free of  debt, with a small bank balance. A christening font was presented by Rev. A. Mortyn, a former minister of the parish. The little church was crowded during the afternoon service, visitors being present from Moorina, Derby, Winnaleah and Branxholm. The evening service was conducted by Rev. J. Robinson, from Scottsdale”.

Weldborough was built on tin and as the mines of the district closed one by one, the town’s population declined precipitously. In 1955 the church closed despite efforts by locals to keep it open. In 1996 it was destroyed by a fire whose cause remains unknown. Apart from the Weldborough Hotel and about a dozen houses, little remains now remains of the old mining town.


* The work of the Chinese Mission will be the subject of an upcoming blog entry. 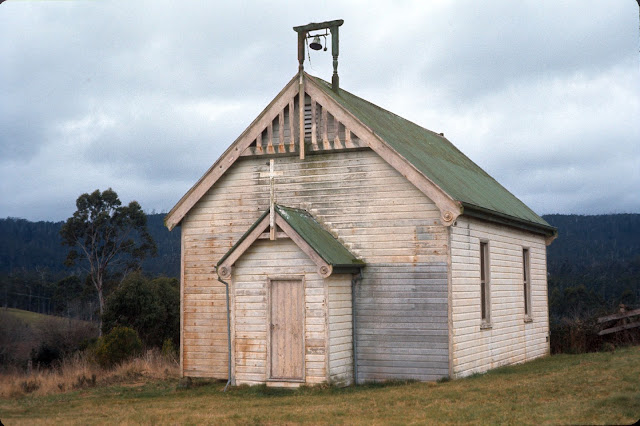