- October 17, 2019
Broadmarsh is rural settlement on the Elderslie Road, approximately 40 kilometres from Hobart. A prominent surveyor of the colony, Peter Murdock, named the area after the marshlands in the vicinity. A convict probation station housing about 300 men was established at Broadmarsh (1842-47). There are now few remains of the station’s buildings. The first church services in the district are believed to have been conducted by Mr Groves at the Station. Before St Augustine’s was built, Reverend James Chambers, the Government chaplain appointed in 1846, conducted services in a room at Springfield. On Sunday afternoons he held services at Upper Broadmarsh, Summerfield, Sydney Cottage, and at Elderslie.

The building of the Broadmarsh church was made possible through the interest and support of the Gunn family. The site was donated by Lieutenant William Gunn formerly of the Bourbon Regiment and one of the first settlers in the area. With the aid of a Government grant and public subscriptions, Reverend Chambers was able to proceed with building a church soon after he was appointed to the pastorate. The church, although incomplete, opened on 27 May 1847.

Although no description of the church’s opening survives, there is a detailed account of the consecration of the building and the cemetery which was published in the Hobart Courier in September 1851:

“On Thursday, the 15th instant, the Lord Bishop of Tasmania, according to appointment, consecrated the Church of St. Augustine, at Broad Marsh, in this Archdeaconry. In consequence of the inclement state of the weather for some days previous, causing the roads to be in an inconvenient state for Tasmanian travellers, as may be supposed the attendance at the service was limited to the inhabitants of the more immediate neighbourhood. The Bishop and the Incumbent (Mr. Forster) were the only ecclesiastics present. The office of chancellor was performed by G. B. Forster, Esq., the Police Magistrate of the district in which the church Is situated, and the petition was read by Mr.Thomas Stanfield, a native-born youth, proprietor of an estate in the Broad Marsh. The Bishop and some of the principal farmers were entertained after the service at Mr. Roberts's tavern, the "Prince of Wales."

The Broad Marsh is a pretty valley, and reminds one more perhaps of some or those spots “to memory dear” in our native land, than many other localities of this Island. Although it is in a rude state of cultivation, comparatively speaking, it nevertheless bears more than ordinary marks of Anglo-Saxon industry. You enter the district, coming from Bridgewater, at the Black Brush. Here, on a rising hill, after crossing a rivulet, school-house and master's collage has been erected by the present chaplain, and, although not possessing architectural pretensions, it is a neat and commodious building of weather-board, suitable for the purpose and neighbourhood…. The situation of the church was some years since the subject of much dispute amongst the inhabitants—one party desirous that it should be erected near the Black Brush, the other near Elderslie. The dispute was happily adjusted by arranging that it should be built in the centre of the valley, which is evidently the most convenient site. It is built on a rock, at a short distance, and slightly elevated, from the road, and is a plain and simple building in the early English style, with twelve pointed lancet windows. A chancel has lately been added of a moderate length, pierced with two lights on each side. The communion-table and altar is slightly raised above the body of the church, and surmounted by a triplet window….The inhabitants of the district generally have contributed but slenderly in comparison to the means of religious instruction and worship placed within their reach, and aid has been obtained from other sources. It is to be hoped, however, that they will not long permit their church to remain without the sound of those "merry chimes," without which a country church at home is scarcely considered complete”.

St Augustine’s never acquired a bell tower to attract worshippers with its merry chimes. However In 1889 it did attract some unwelcome attention:

“A week or two ago we drew attention to a wanton act of destruction of property at one of the New Town churches, and now another case,…. it is reported from Broadmarsh, where several of the large cathedral glass windows in St. Augustine's Church have been broken. In this latter case advantage seems to have been taken of the fact that Mr. Blacklow, who occupied a house in the immediate vicinity of the church, had vacated it, for the vandals set to work on the evening following his departure. Deeds of this kind are obviously the works of either larrikins or semi-fools, whose understanding needs the sharp stimulus that a birch can best impart. The church authorities intend offering a reward for the discovery of the offenders, and the police may take the matter in hand….”.

Apart from this act of vandalism the church’s history is largely uneventful. The building underwent major repairs in 1887 and its centenary in 1947 was widely reported in the local press. St Augustine’s closed in 1997 and was subsequently sold and later converted into a house. It is listed on the Tasmanian Heritage Register as a significant example of an early sandstone church.

All the photographs below, unless otherwise indicated are my own. 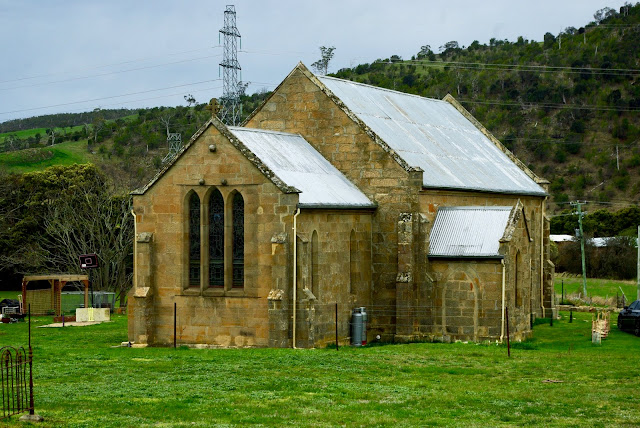 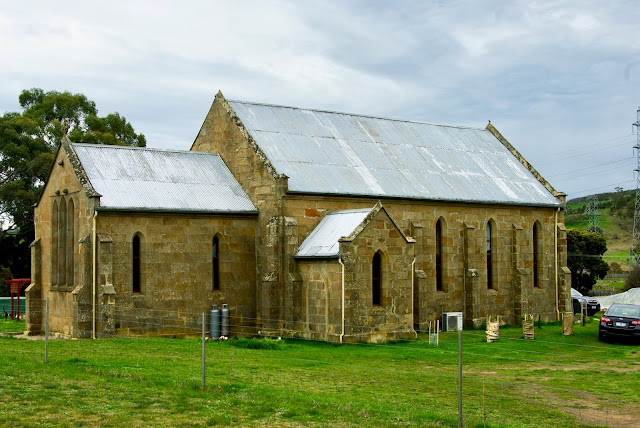 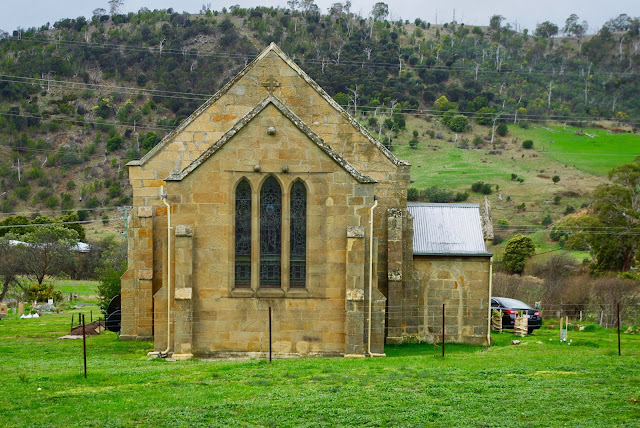 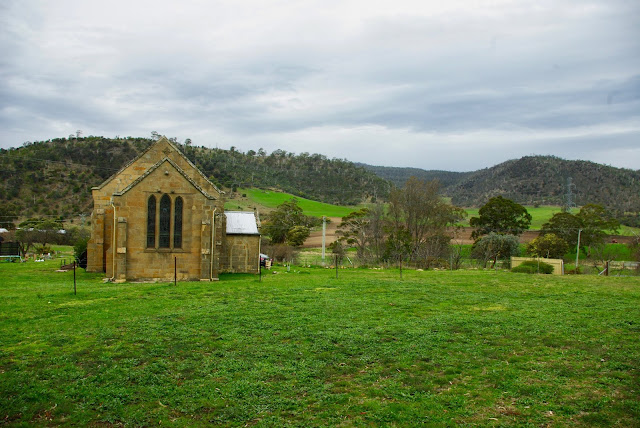 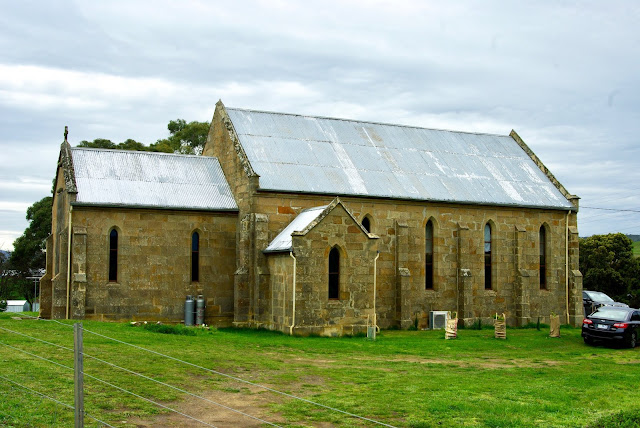 A few of the older headstones in St Augustine's cemetery: 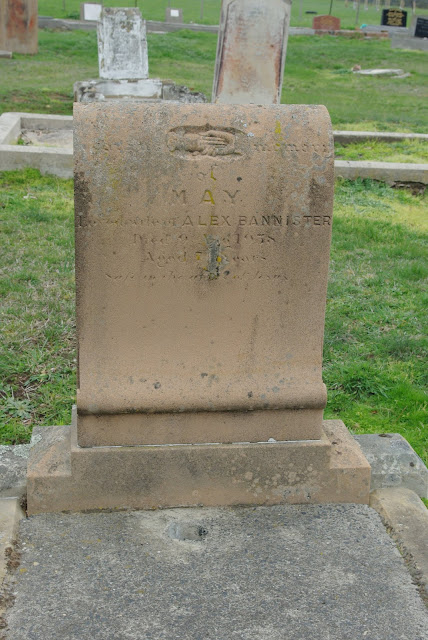 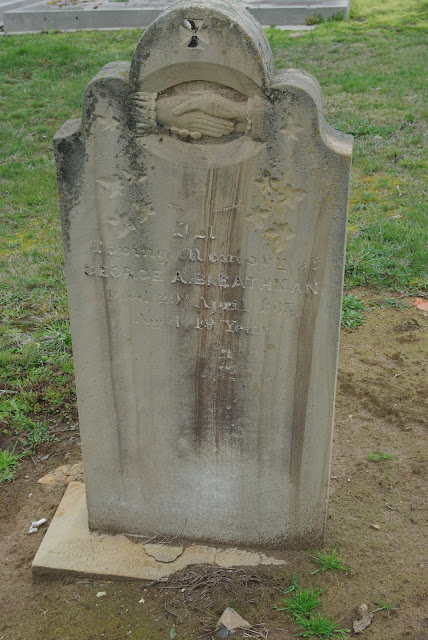 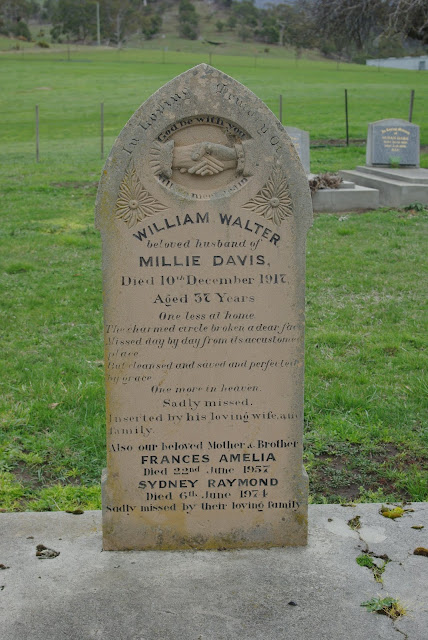 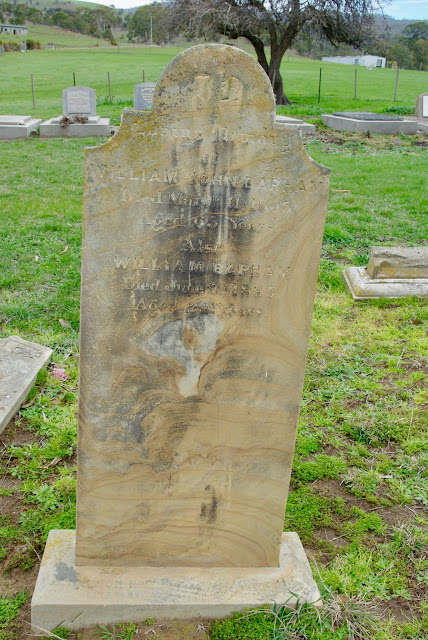 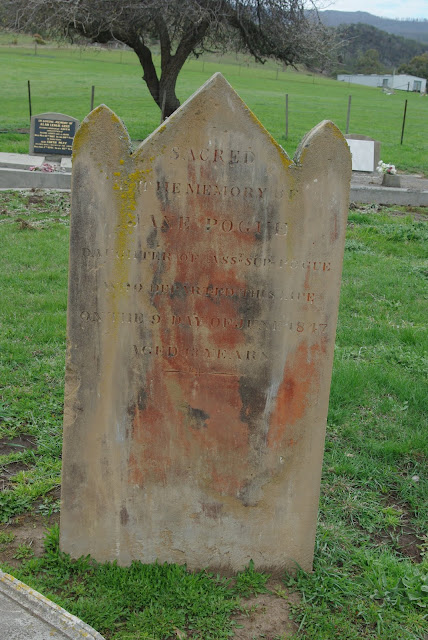 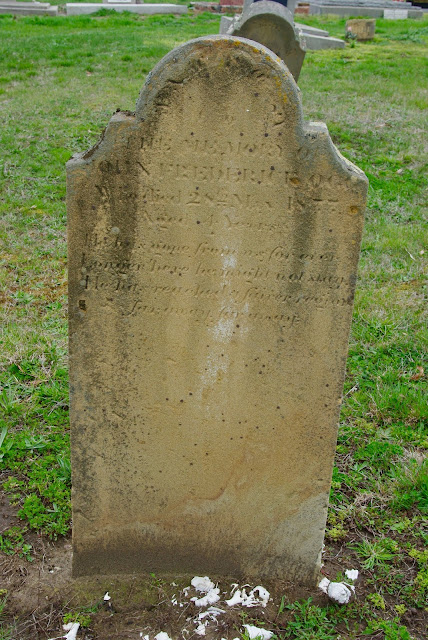 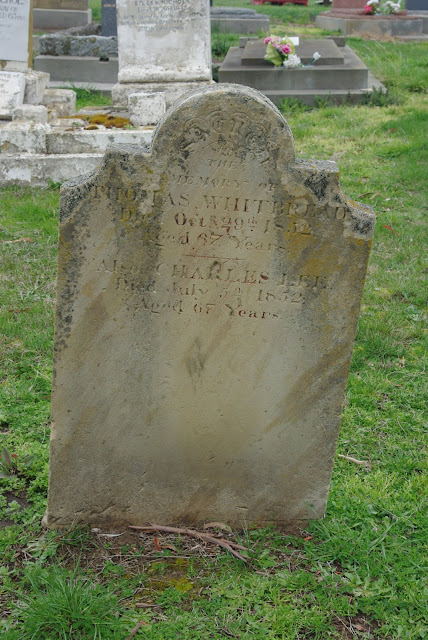 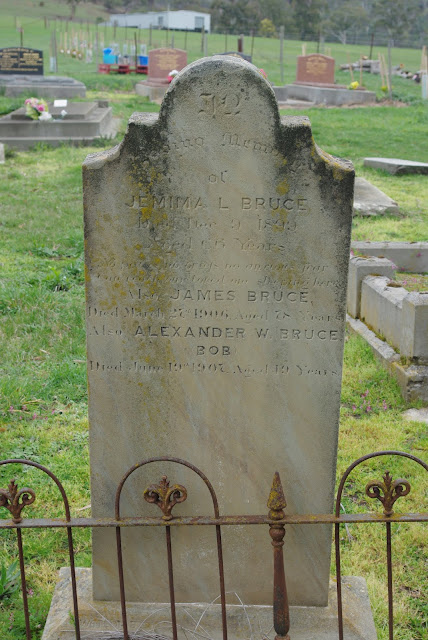 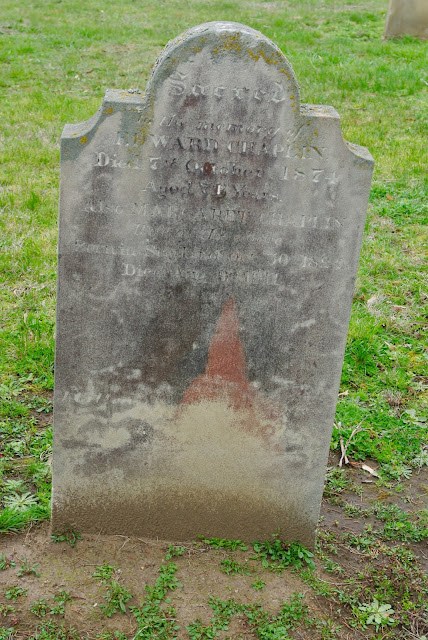 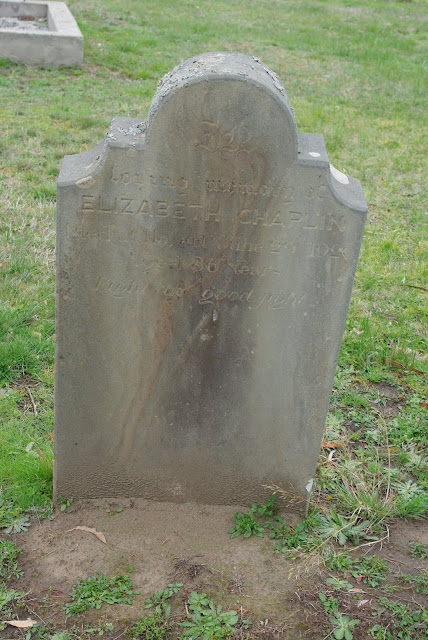 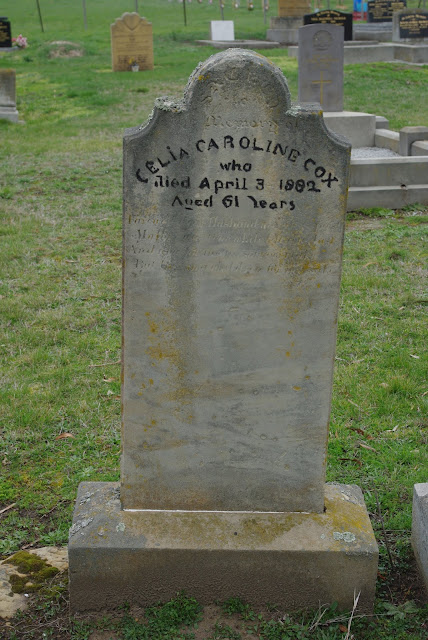 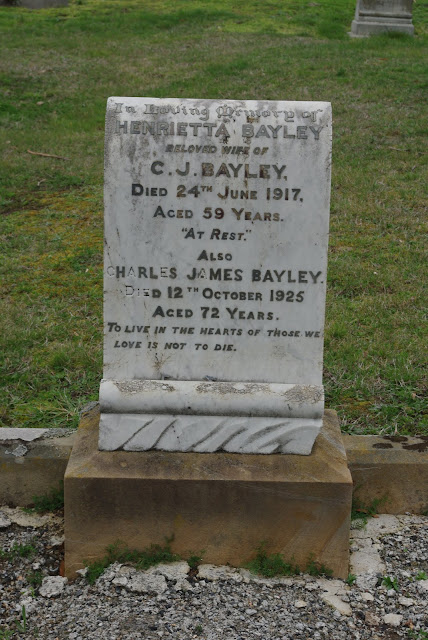 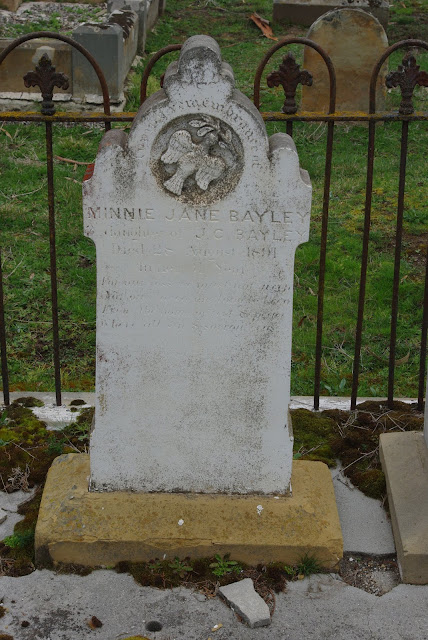 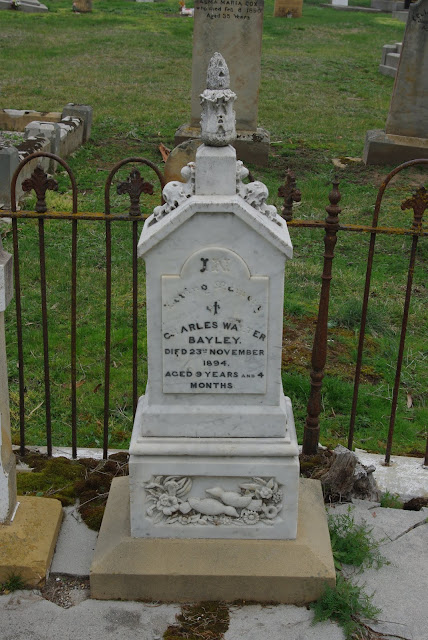 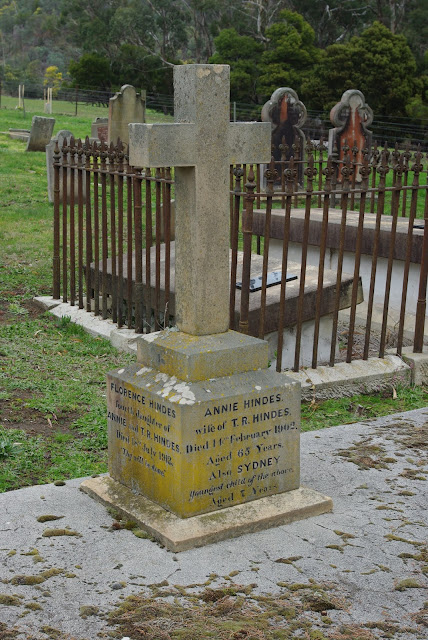 Information about the cemetery can be found on this link: