- November 24, 2019
Riana is a small rural township located 13 kilometres south of Penguin. The settlement was started by loggers and over time farming became the main activity. At the close of the 19th century the recently settled Riana district was described in some detail by the correspondent for the Launceston Examiner:

“…The district is a rising and most promising one. Riana is the southern (upper) portion of the Pine road, Penguin, and, has been opened up only within the last six or seven years. The Pine road runs in a due south line from Penguin, parallel with and on the western side of the Dial Range, and extends for a distance of ten miles…..By far the larger number of farms are on the western side of the road, as also are all the by-roads. The soil is a good dark chocolate and black, and yields excellent crops. For the first eight miles from Penguin the timber is almost solely stringy bark, beyond that myrtle, sassafras, celery top pine, and blackwood are the most plentiful. The Dial Range is said to contain various minerals, but nothing of importance has yet been discovered…..The chief industries are farming and timber getting. Potatoes and oats are the chief crops. Pine Road is well supplied with educational institutions and churches, as there are three of each within a distance of four miles…. Recently two petitions were sent to the Postmaster-General, one asking for a post office to be established at Riana and the other for a telephone service from Penguin….”.

Outside the coastal towns of the North West there were only a handful of Catholic churches established in the hinterland. One of the churches mentioned in 1899 by the Examiner’s correspondent was a small Catholic church which also served as a school. It was situated on the corner of Kergers Road and Pine Road about 1½ kilometres south of Riana Primary school. The church-school was erected in 1893 and in June of that year the building was described by the local correspondent for the Examiner:

“I noticed that a church building was in course of erection adjoining Mr J. Counsel's homestead on the Pine road, and on enquiry I was informed that it was to serve the double purpose of a Roman Catholic church and school, and will supply a long-felt want in the district. The building, which is of neat construction, is of wood, and measures 15½ x 20, and is pine-lined. The window and door frames and skirting are of blackwood. The altar also has a blackwood panel in front. The building will cost about £45 without labour, and the money has been raised by public subscription. The labour is being supplied gratuitously by Messrs J. and L. Counsel and R. Neill, and redounds-to their credit, while the carting of the materials has been done by Messrs M'Hugh Bros. and J. Murphy, free of charge. When completed the building, will certainly be a credit to the district”.

Even by 19th century standards the church was tiny and soon after the turn of the century fundraising was undertaken to enlarge the building. However the movement of population away from the Kergers Road junction resulted in a decision to remove the church closer to Riana in a more central location. In 1921 the Burnie Advocate reported that a site had been purchased on the main road near the Riana butter factory. By the close of 1923 the new site was prepared and a contract for the church’s removal was awarded to James Mulligan. The relocated building was considerably enlarged and officially opened on Sunday 15 June 1924. The opening ceremony was reported by the Advocate:

“On Sunday the new Catholic Church of St. Aloysius at Riana was opened with full ceremony. In the absence of Archbishop Barry, Rev. T. J. O’Donnell performed the ceremony. There was a large attendance in spite of the inclement weather. Amongst those in the congregation were the members of the Sisters of St. Joseph’s Convent at Ulverstone and Forth. The church was originally at Pine road, but some time ago was removed to a position at Riana purchased by Father Dowling. There are ten acres in the new site. The church when removed was added to, so that now it is commodious. It is 47 foot long and 20 feet wide, with a porch 8 by 8, and a Sacristy 12 by 12. It is substantially built, and furnished throughout in a complete way. The high altar is neat and the sanctuary is covered with valuable red carpet. The stations of the Cross are good, and complete sets of vestments have been provided. The church is neatly fenced and occupies a prominent site from which it may be seen for miles round. At 11 a.m. Father O'Donnell, accompanied by Father Dowling, performed the blessing, according to the Ritual. The exterior was blessed and the procession passed right round the building. Afterwards the interior was blessed. After the blessing of the church Father Dowling celebrated a Mass.…”.

St Aloysius had a relatively brief life at its new site and closed in the early 1950’s. In 1956 the building was sold and removed to be converted into a house. It was latter used as a shed but I do not know if anything of this building remains. Remnants of the St Aloysius’ stone foundations are still visible at Riana.

Photographs of the site of the Church (2019) 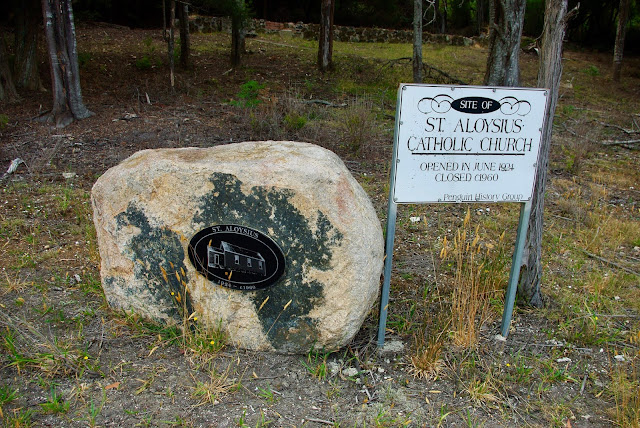 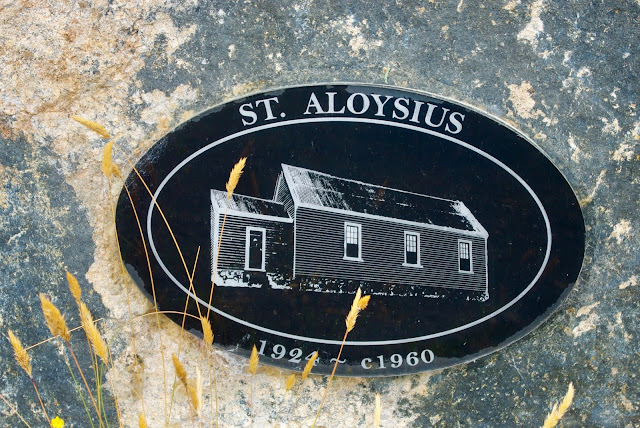 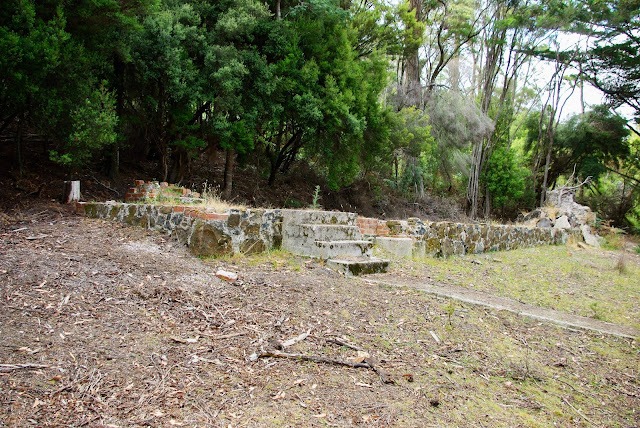 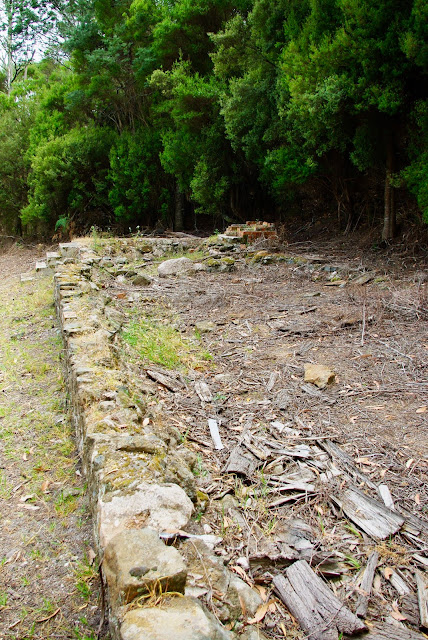