- December 09, 2019
Ellendale is a village situated approximately 10 kilometres north of Westerway in the Derwent River Valley region. The settlement was originally known as Monto's Marsh before it was renamed after the wife of the local Member of Parliament, Nicholas Brown of Meadowbank. There are two churches at Ellendale, St Andrew’s Anglican church (1889) and St Colman’s Catholic church (1890).

In 1885, shortly before the opening of Ellendale’s two churches, a visitor to the area wrote a blunt assessment of the settlement and its future:

“An excellent bridge across the Derwent, and from it I took my departure for Monto’s Marsh, or Ellendale as its more euphonious name it. I think the people call it eight or nine miles, and the route is by a natural road through, and by far the major portion, poor land with a few farms by the way in the better gullies. Ellendale is a centre where a number of farmers have selections; but with few exceptions they cannot be called first class land. As a rule, I think, where a man has 50 acres in a block, he is lucky if more than 25 are of this quality. Many have hop grounds and during the harvest it is a busy place, but will never be a wealthy one. A Mr. Clark, an early, if not the earliest settler has the pick of the land as seen from the road. There is a post office and school, of course; but beyond a small shop, I saw no store. Always a sign of meagre prosperity when a storekeeper does not think worth while to take up a stand. The people are hungry for railway extension, though how this would pay is outside their calculations”.

Ellendale had a small number of Catholic farmers and settlers who were served by visiting priests from New Norfolk which was 25 miles distant. The move to build a church began in the mid 1880’s. By 1888 plans were well advanced as reported in the Tasmanian News:

“It is now a matter of fact that Mr James Dunn’s tender for the erection of the Ellendale Catholic Church has been accepted. He has undertaken to erect a very neat weatherboard structure, lined throughout with T and G pine boards, the whole to be painted, stained, and varnished, for the sum of £247. The site, which is the gift of the Hon. N. J . Brown, is a charming one, situated In the reserve for the future township, and having a frontage on and forming the junction of the main road and the branch road to Donahy’s. Cleared and fenced with a batten fence, on the frontage to the main road, it looks as if nature formed it specially for the purpose. As more than half the contract money has to be realised, the Catholics of Ellendale, who are not very numerous or very wealthy, hope their more fortunate friends and neighbours will come to their assistance on the occasion of the formal opening”.

In the following year the Tasmanian News carried a report on one of the fundraising events for the building costs. The scene described by the newspaper’s local correspondent is far more optimistic than the description of the settlement four years earlier:

“Lest there should be any ‘unsophisticated male’ yet alive in Tasmania who is in unhappy ignorance of the ‘whereabouts’ of our beautiful township, I will begin by saying that it lies in the centre of a most beautiful district…. Happy homesteads are around and near, the woodsman’s axe never ceases…. An entertainment and concert had been organised by Rev. Father T. M. O’Callaghan, Catholic pastor of the parish, in aid of the Building Fund of the new church of St. Colman, the foundation-stone of which is to be laid on Saturday, 9th November 1889. The local State schoolroom was kindly loaned for the occasion, and into a seething mass of humanity pushed its way soon after 7 o’ clock p.m.. The good priest himself presided. In a pithy speech he ‘opened the ball’. He detailed the inconvenience himself and his co-religionist suffered for want of a proper place of worship, and thought the time had come when they could erect a suitable temple. Catholics and non-Catholics put their heads together and, thanks to the exertions of the Rev. Father Bernard J. Murphy and the Hon. N.J. Brown as sum of close on £150 was collected by subscription….”

A year after the foundation-stone laying ceremony the church was opened by Archbishop Murphy. The ceremony was recorded by the Hobart Mercury:

"On Monday Ellendale was en fete, the people from the district around flocking to the township, comprising not only Catholics, but people belonging to all denominations. A contingent of clergy from Hobart arrived at 12 o'clock, consisting of Fathers O Callaghan, O Flynn and Beechinor (Richmond). The occasion was the solemn blessing by the Archbishop of the new Church. Mass was celebrated by Father O’ Callaghan, …The service was listened to with great attention, and at its close Father Murphy submitted a financial statement in connection with the new church, from which it appeared that a debt of £250 still remained on the building. A collection was then taken up amounting to £71 15s. The Archbishop congratulated the people of Ellendale on the beautiful church they had erected in their midst, and expressed his thankfulness at the generosity shown by people of all denominations in that locality in assisting in the good work…., A luncheon was subsequently provided in the State school, ….The building is a handsome Gothic edifice. The nave is 40ft by 22ft, chancel 10ft by 12ft, sacristy 10ft by 12ft, and porch 8ft by 12ft. It was designed by Mr Fagg, architect and built by Mr J Dunn, Colville-street, who was congratulated by the Archbishop on the excellent manner in which he had carried out the contract”.

St. Colman’s will celebrate its 130th anniversary in 2020 and although the church has experienced some difficult times it has survived and remains a jewel at the centre of a beautiful township.

All photographs below are my own unless another source is indicated. 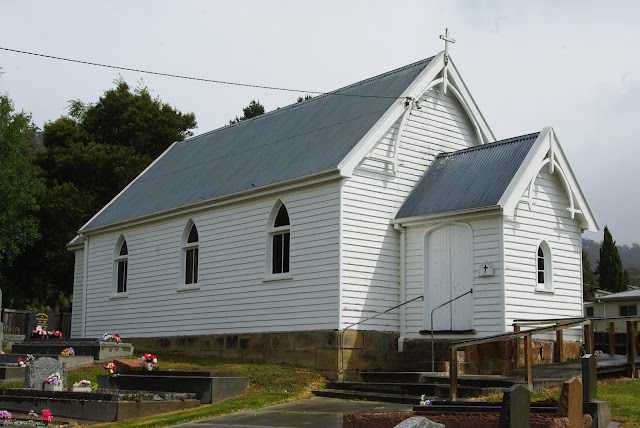 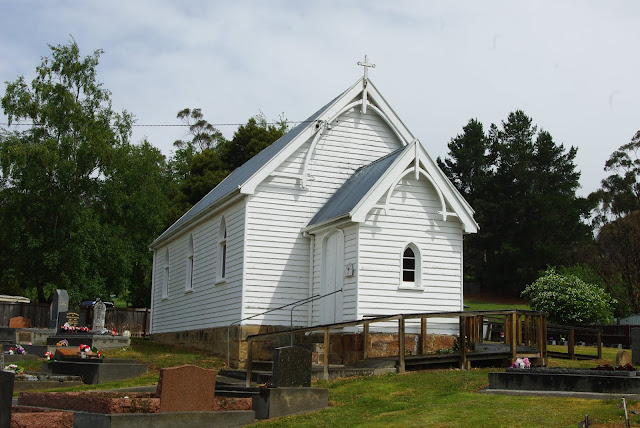 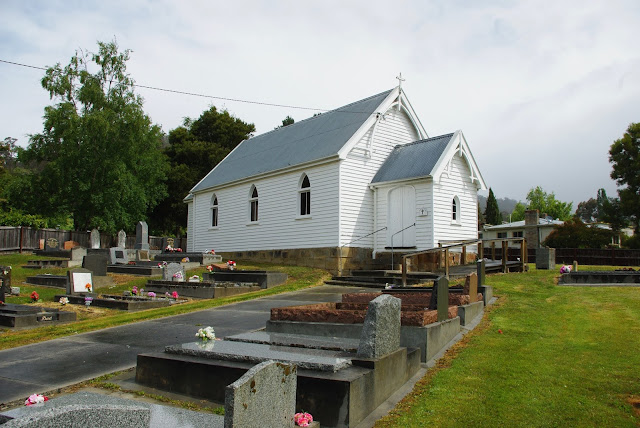 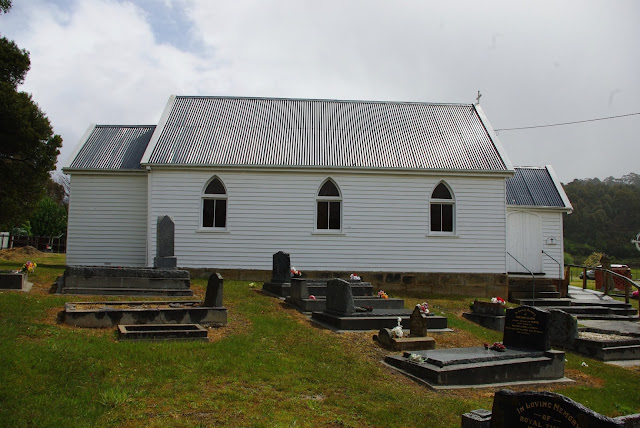 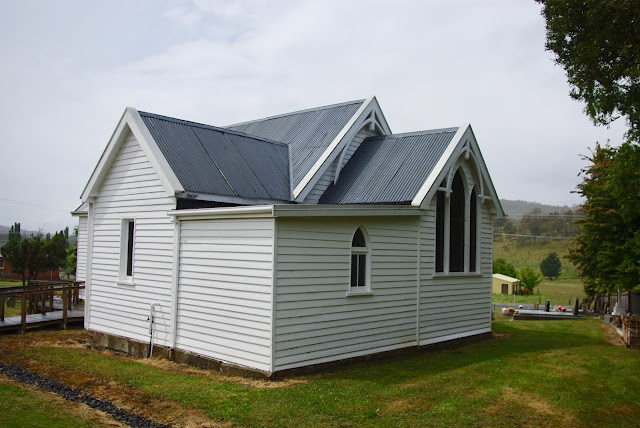 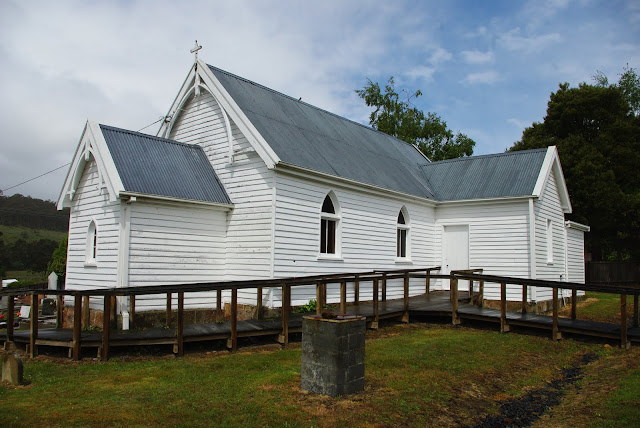 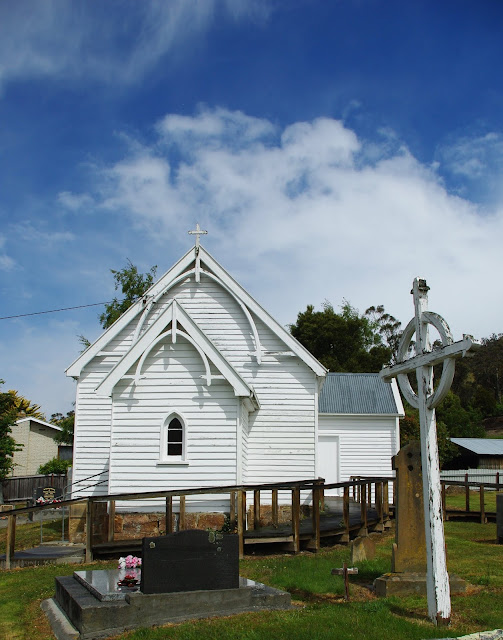 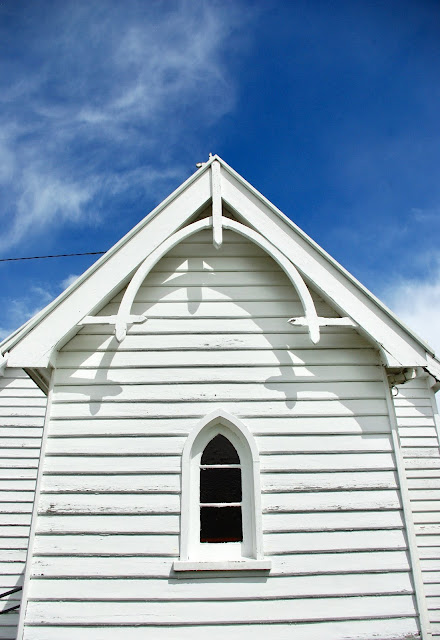 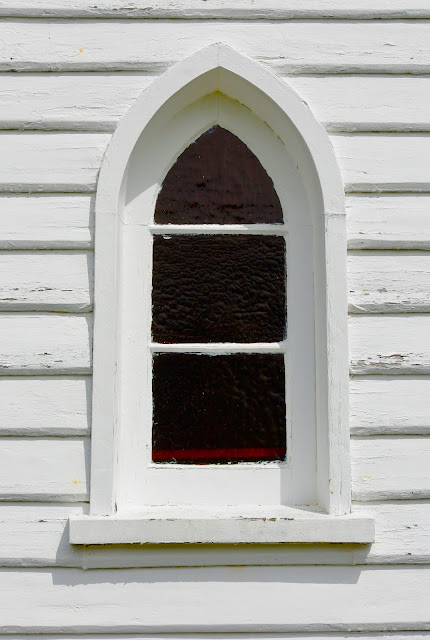 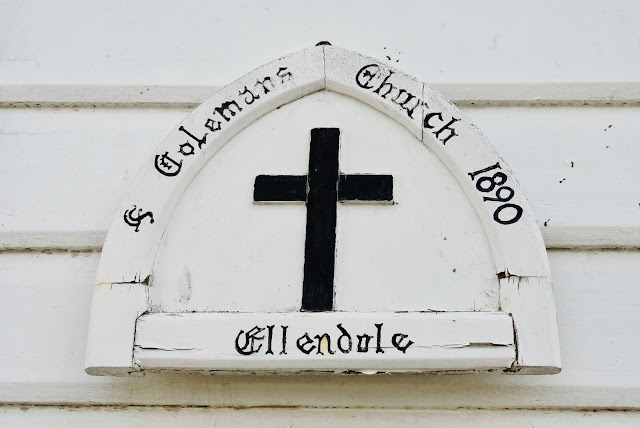 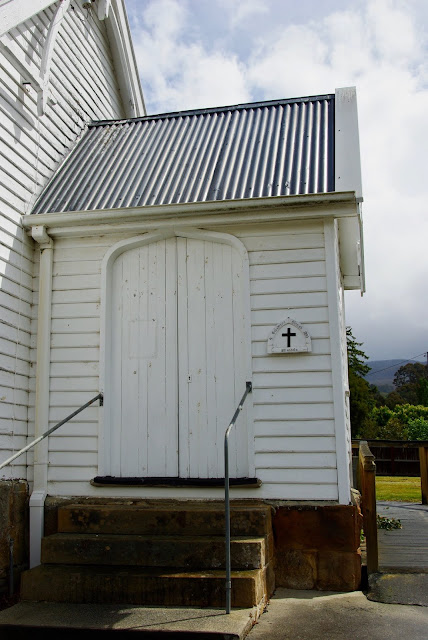 A few headstones representing some of the Catholic families at Ellendale during the early years of the settlement.  A full list of names of individual buried in here is listed in a link at the end of this page. 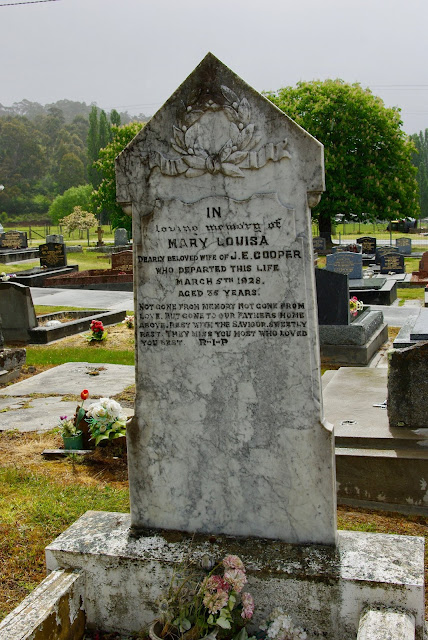 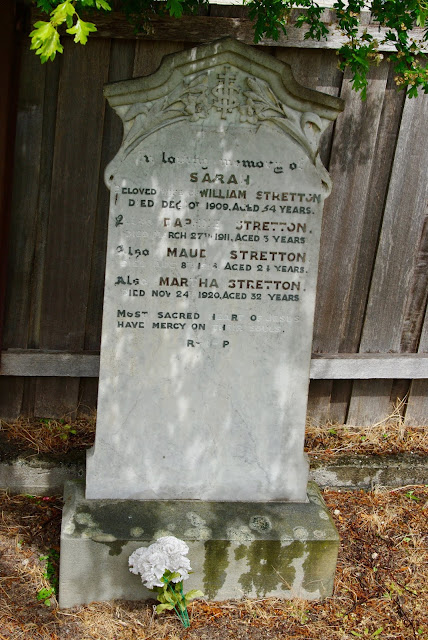 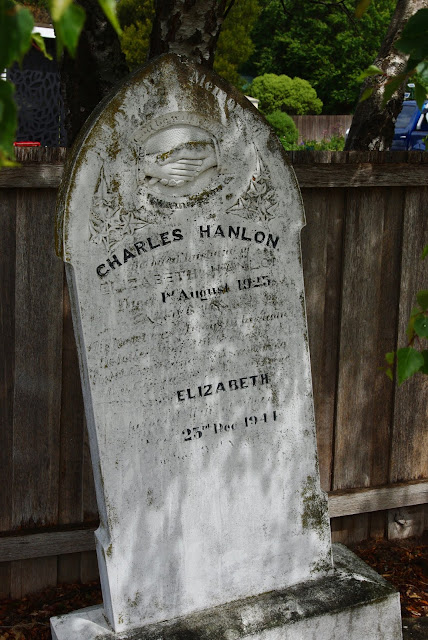 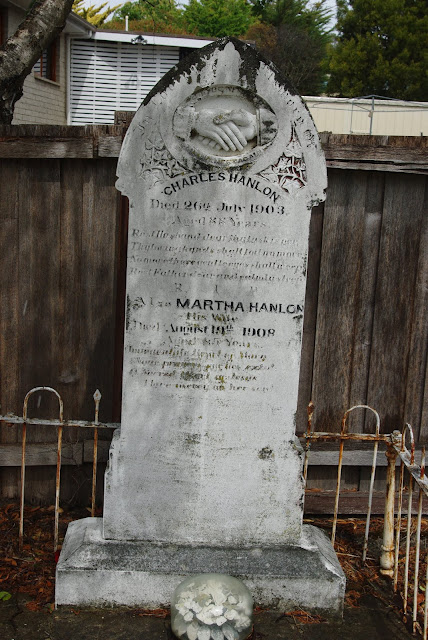 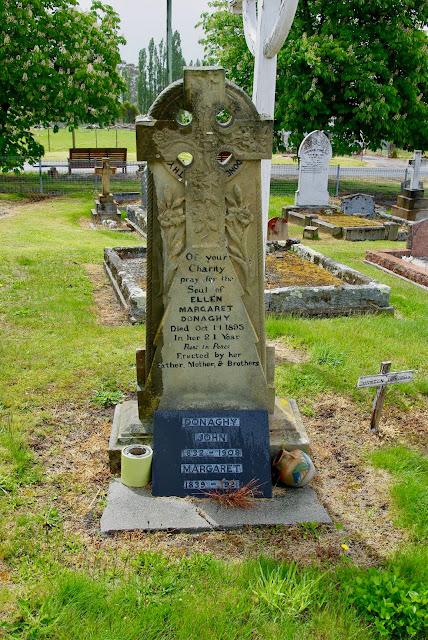 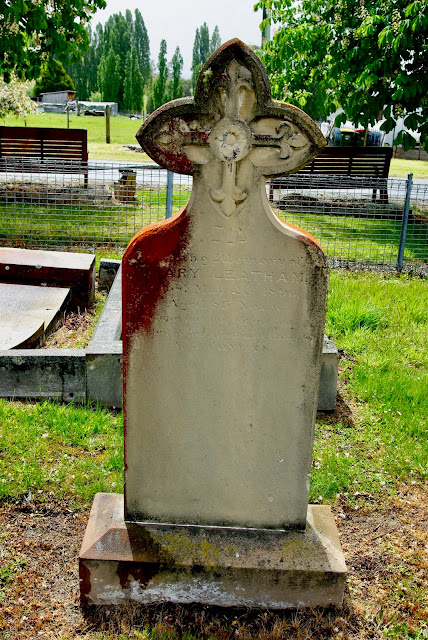 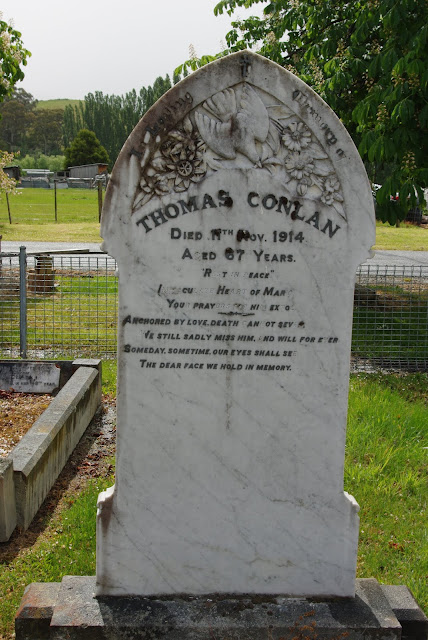 Link to list of individual buried in the cemetery: