- December 27, 2019
Ellendale is a village situated approximately 10 kilometres north of Westerway in the Derwent River Valley region. The settlement was originally known as Monto's Marsh before it was renamed after the wife of the local Member of Parliament, Nicholas Brown of Meadowbank. There are two churches at Ellendale, St Colman’s Catholic church (1890) and St Andrew’s Anglican church (1889).

In 1885 a “visitor” to Ellendale took a pessimistic view of the settlement’s future:

“An excellent bridge across the Derwent, and from it I took my departure for Monto’s Marsh, or Ellendale as its more euphonious name it. I think the people call it eight or nine miles, and the route is by a natural road through, and by far the major portion, poor land with a few farms by the way in the better gullies. Ellendale is a centre where a number of farmers have selections; but with few exceptions they cannot be called first class land. As a rule, I think, where a man has 50 acres in a block, he is lucky if more than 25 are of this quality. Many have hop grounds and during the harvest it is a busy place, but will never be a wealthy one. A Mr. Clark, an early, if not the earliest settler has the pick of the land as seen from the road. There is a post office and school, of course; but beyond a small shop, I saw no store. Always a sign of meagre prosperity when a storekeeper does not think worth while to take up a stand. The people are hungry for railway extension, though how this would pay is outside their calculations”.

James Clark, mentioned by the “visitor”, was indeed the first settler in the district and in 1874 had donated land for building a church and the establishment of a cemetery.

The cemetery was consecrated in 1885 and by this time plans for a church were well advanced. In April 1888 in his synodal address, Bishop Sandford’s noted that:

“I have…approved of plans, submitted to me by Mr. North, for a church to be erected in the interesting settlement at Ellendale, on Mount Field West…”.
By the beginning of 1889 funds were available to justify the commencement of work. Mr Alexander North was commissioned to prepare plans, and a contract to build the nave and porch of a handsome stone church was entered into with Mr. Fred Reynolds. (Church News January 1890)
The foundation stone was officially laid on 4 May 1889  on a site given by Mr Isaac Clark. The church was formally opened and consecrated in December of that year. The Launceston Examiner carried a report of the ceremony written by an Ellendale correspondent:

“On December 3 an interesting and important ceremony took place at Ellendale, in the parish of Hamilton) namely, the consecration of St. Andrew's Anglican Church. Bishop Montgomery, with the Venerable Archdeacon Mason and the Rev. C. W. H. Dicker arrived at Ellendale about 11am and marked with interest the ecclesiastical structure in passing, and then pushed on to the school, where tables and side-boards were loaded with immense bouquets of flowers. After scanning the school-room, which had been turned into a perfect bower, and admiring the arches erected near the church and school-house, chiefly composed of greenery upon a firm foundation, and watching the visitors arrive in coach, drag, and cart, the time drew on towards mid-day, the time been fixed upon for the consecration of St. Andrew's. The procession was of considerable length….. The new church had been beautifully decorated with paint and flowers by loving and reverent hands. The body of the church was filled to overflowing, numbers standing throughout the service, which was new to many of us, consisting of the form of consecration, after which the offerings were made, each member of the congregation in turn moving up to the temporary chancel and depositing his or her oblation upon the vessel prepared for the offerings; the collection thus made amounted to upwards of £54, which was considered to be an encouraging sum…”.

Unfortunately the correspondent did not have an eye for architectural detail and did not provide a description of the building. However the church was incomplete because of the reference to the temporary chancel. In 1896 a chancel was built and dedicated by Bishop Montgomery. It is the chancel which gives the church its distinctive appearance and it resembles a turret complete with crenellations. I do not know if this was part of the original design but the ‘turret’ reminds me of another Alexander North church, Holy Trinity in Launceston, which has similar structures.

In 1900 problems with the church’s walls were reported by the local correspondent for the Hobart Mercury:

“The minds of the parishioners of St. Andrew's (Anglican) Church have been much exercised lately owing to the west end of their church to a certain extent parting company with the remainder of the building. It is no unusual sight when divine service is held there to witness members cast an anxious glance upwards on entering, to see if the rift has widened. Lately, the wall has been on the return journey, which none here could account for, till the opinion of an expert was obtained on the subject. It now seems clear that the opening and closing process will be, performed once per annum, unless the moving end is securely bolted to the stationary part of the structure. The movements are caused by the clay at the foundation drying and contracting in the summer, and when the wet season comes round expanding. This work should be be seen to at once.”

I have not found and further references to problems with west wall of the church although I noticed wall washers have been put in place to pin the walls together.

In 1909 a bell was acquired and was hung in a steel bell tower alongside the church. The Daily Post reported:

According to the Rationalisation of Church Buildings Ordinance 1997 St. Andrew’s was listed for closure however it survived this threat and it also escaped listing for sale in 2017 in connection with the National redress scheme.

All photograph were taken by myself in 2019. 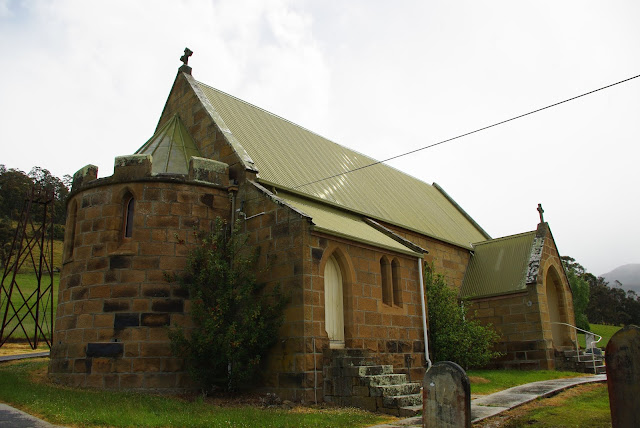 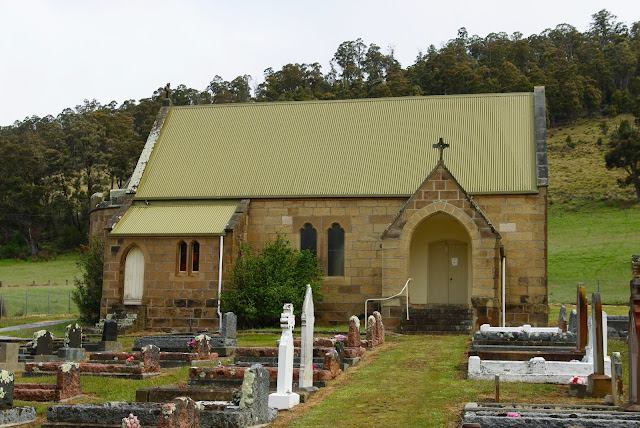 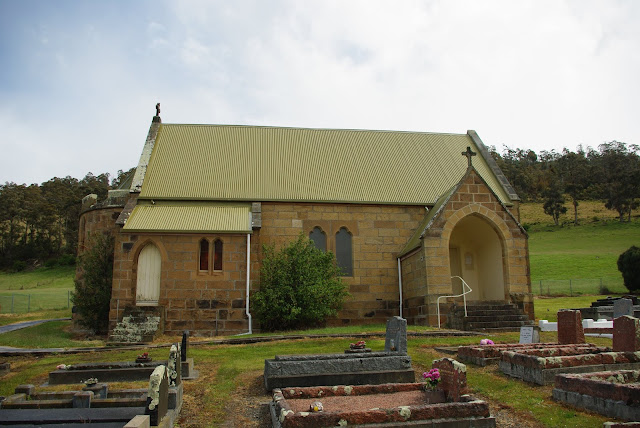 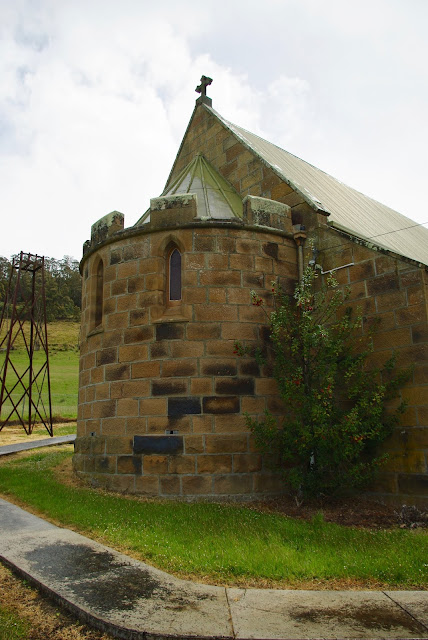 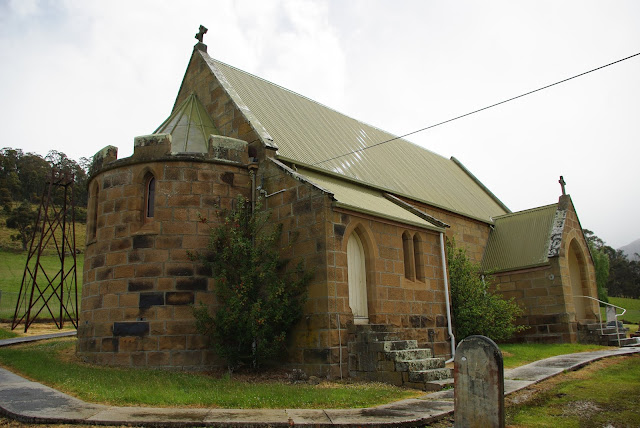 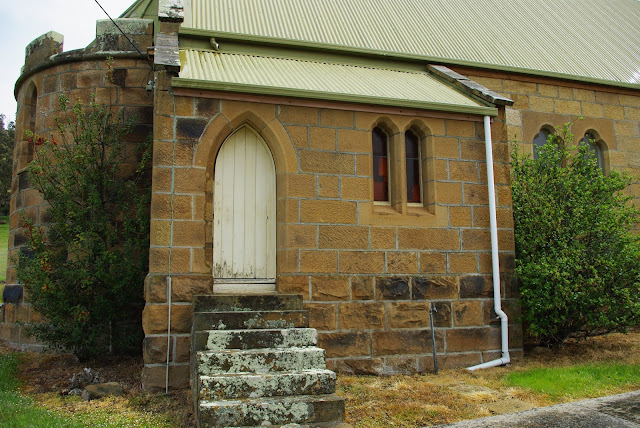 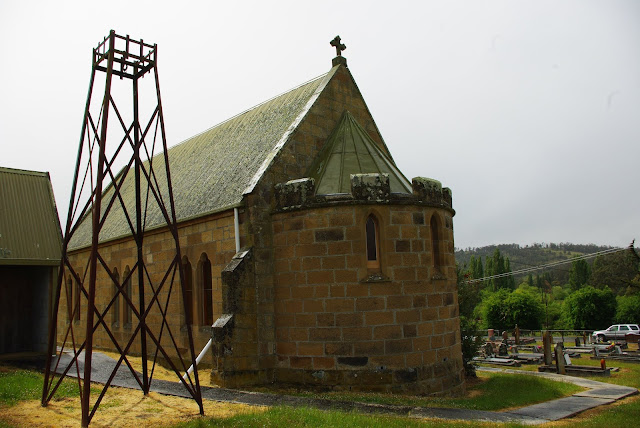 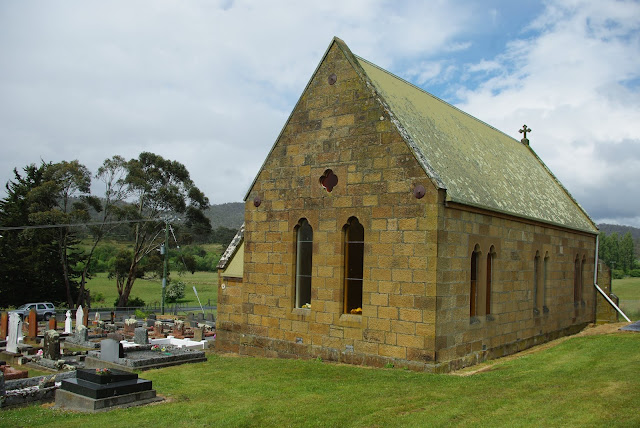 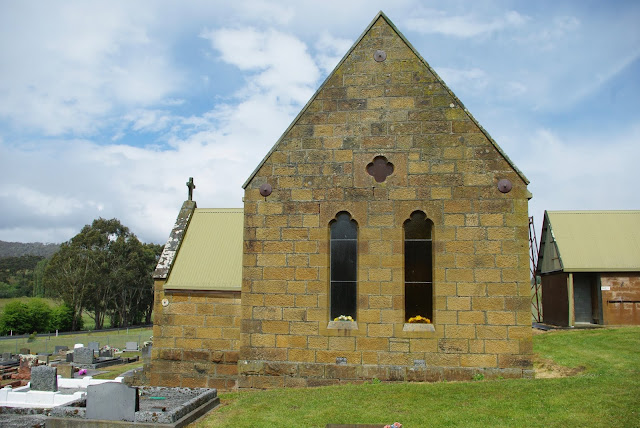 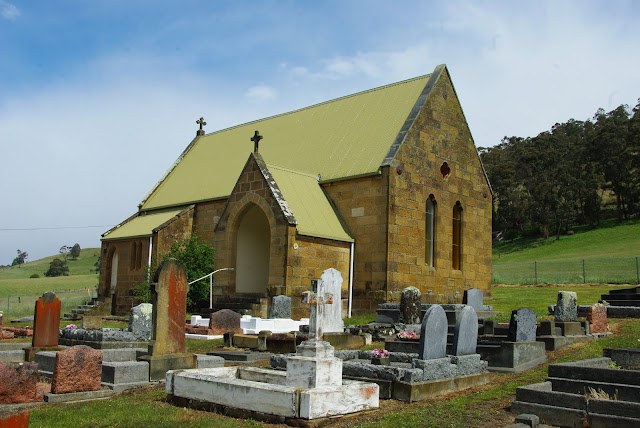 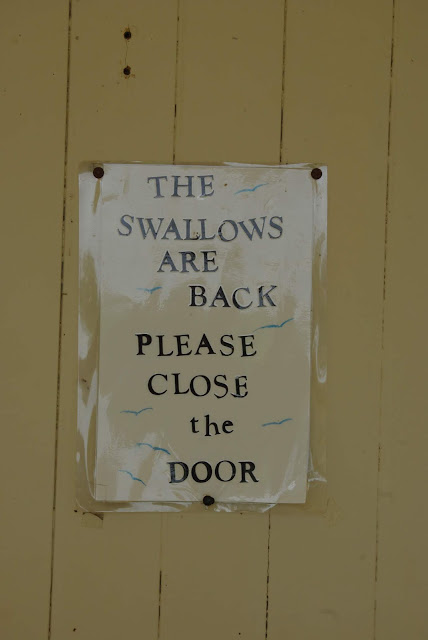 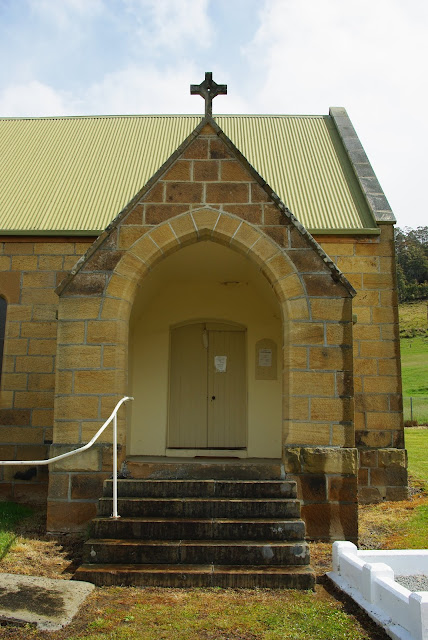 A few of the historic headstones in St Andrew's cemetery, including that of James Clark, the first settler in the district and donor of the land for the church, who died at the age of 100. 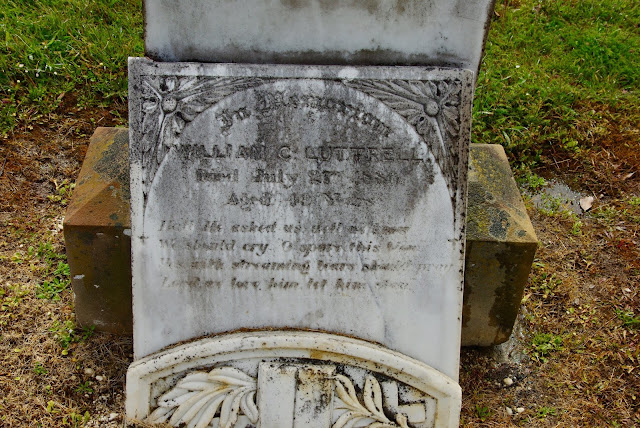 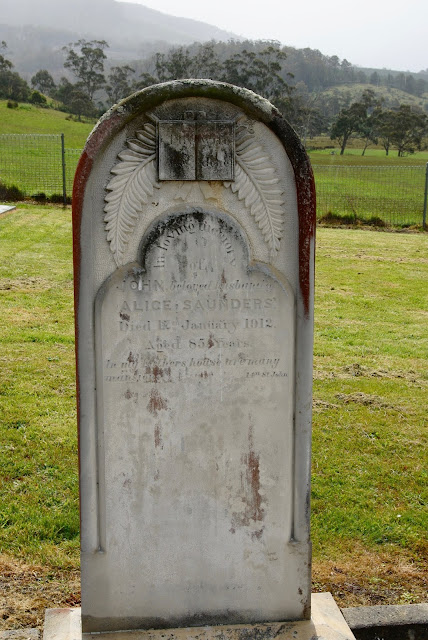 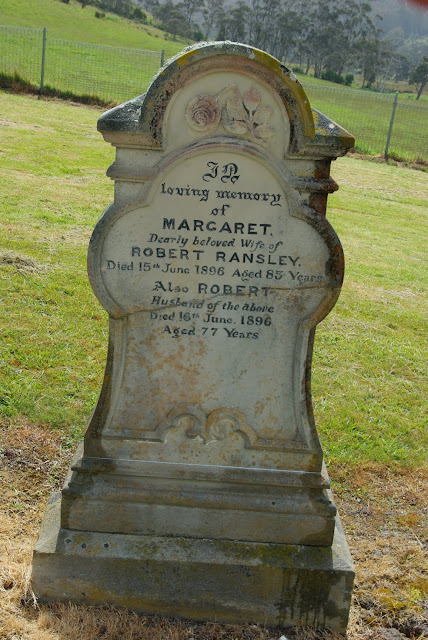 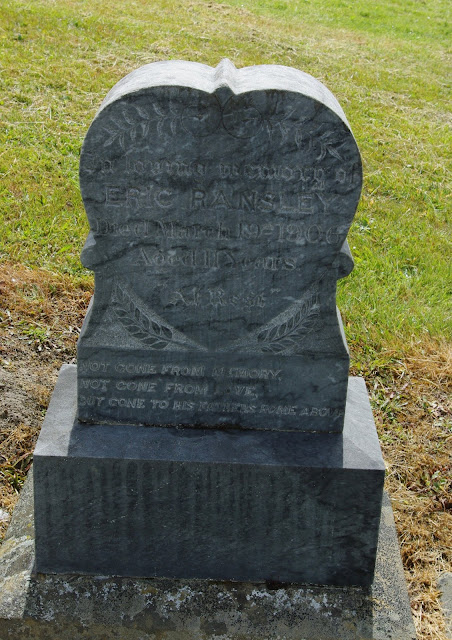 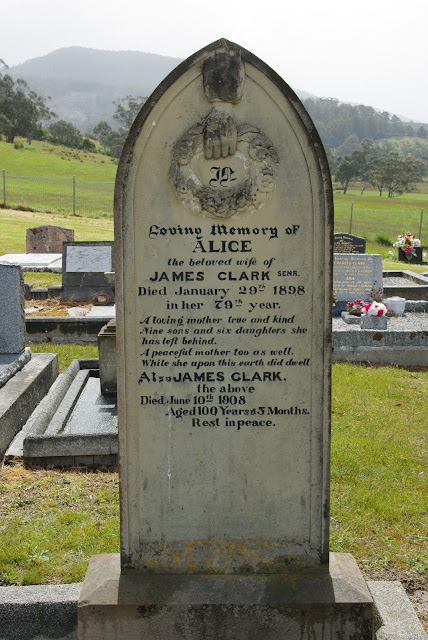 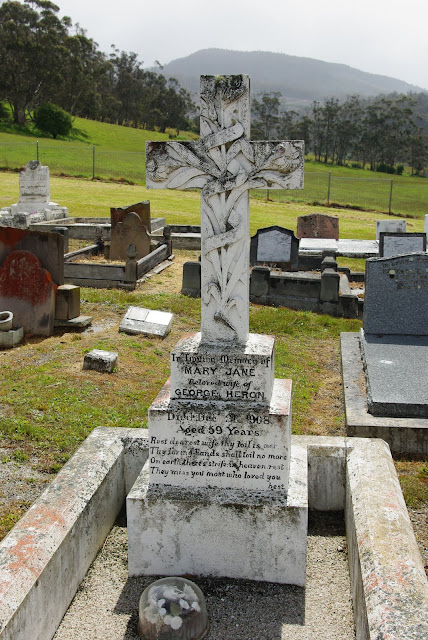 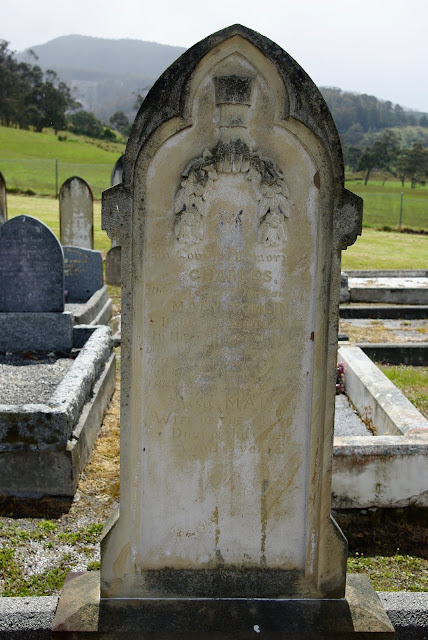 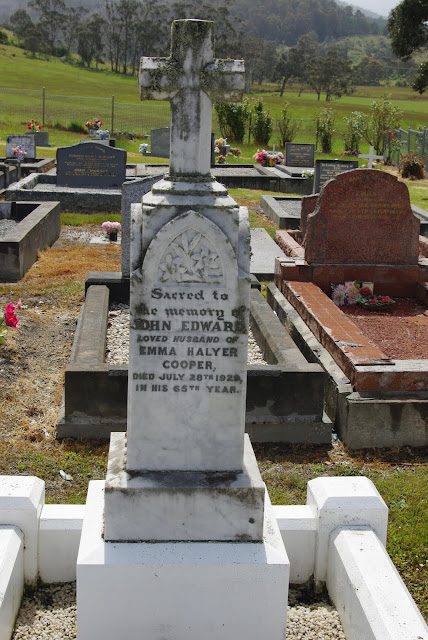 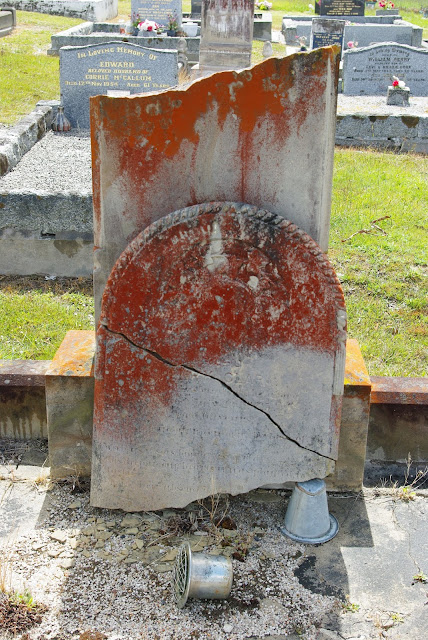 A link to burials in the St Andrew's Cemetery: