- January 19, 2020
Risdon is a suburb of Hobart on the east shore of the Derwent River approximately 7 kilometres north of Hobart. Risdon Cove was the site of the first British settlement in Van Diemen's Land. The cove was named by John Hayes, who mapped the river in the ship ‘Duke of Clarence’ in 1794, after his second officer William Bellamy Risdon. Risdon Cove is a historically contested area as it the location of the first colonial settlement in Tasmania established by Commandant Lieutenant John Bowen and also the site of the first murderous encounter between soldiers and the Tasmanian Aboriginal people.

A small chapel overlooking Risdon Cove owes it existence to prominent Irish merchant and politician Richard Cleburne (1799-1864). Cleburne’s farmstead had extensive frontage on the Derwent and here he built a fine stone house. In April 1854 he bought the Ferry House at Risdon, and in 1860 took over the government's irregular ferry service. Following Cleburne’s death at Risdon in 1864 his widow Harriet and his daughters donated land and funds for the establishment of a non-denominational chapel and provided an endowment for trustees to maintain the chapel and a Sunday school.

Details about the chapel are provided by the Tasmanian Times and the Mercury’s reports of the opening service in October 1867.

“The steamer Monarch left the Franklin Wharf at 2.30 yesterday afternoon, for the purpose of conveying persons desirous of assisting at the opening of the above place of worship, but owing to the inclemency of the weather the attendance was very limited. The Chapel, which is a neat and substantial wooden structure has been built by Mr. G. S. Seabrook; Mr. Seabrook, senr., being the architect. It is calculated to seat 95 persons, but will easily accommodate 100. The interior is fitted with a handsome reading desk and plain but commodious open pews. The land on which the Chapel stands has been presented by Mrs. Cleburne and is conveyed to trustees. The entire cost of the building will be about £186, a considerable portion of which sum has been contributed by Mrs. and the Misses Cleburne….”

“Mr. Crouch, as one of the Trustees, drew attention to the exertions of Mrs. Cleburne and family in the erection of the building, to whom he proposed a vote of thanks,…The Rev. R. D. Harris drew attention to the fact, omitted by previous speakers, that the building was designed not only for a place of worship, but for a Sunday School, and as there were at least thirty children in the immediate vicinity capable of attending, he trusted that the Sunday School would be attended with good and lasting results….The want of this Chapel has been severely felt for the past thirty years, the nearest places of worship being New Town on the opposite side of the river, and Richmond….”.

Regular weekly services were subsequently held at the chapel with the Church of England supplying the first minister the following Sunday.

A report on the first anniversary of the chapel in November 1868 provides further information about the church and also indicates that the establishment of the Sunday school may have experienced some difficulties. The Hobart Mercury reported:

“The first anniversary of the opening of the little chapel at Risdon, erected for the use of all Protestant denominations, was celebrated yesterday afternoon.… The Emu and Cobre steamers were announced to leave the Franklin Wharf at 2 o’clock for the convenience of visitors, but the threatening aspect of the weather about the time of starting prevented a very numerous party from assembling, …The weather cleared soon after the steamer left the wharf, and the trip up the river was a very enjoyable one. The steamer landed her passengers at Risdon at about half-past 3, and the party at once proceeded to the chapel, where they found besides a numerous assemblage of the residents of the district, several ministers and friends from Hobart Town who had preferred travelling by road...”.

“…He referred to the importance of the cause in which they were engaged, and said all must feel pleasure in assembling to wish it God speed. He referred to the diminutive proportions of the building, and said they must not despise the day of small things. Their numbers, although small now, would become augmented from time to time, and many souls might be saved in that little place. He alluded to the establishment of the Sunday-school in connection with the chapel and urged upon the residents the importance of supporting and encouraging it, and offering earnest prayer continually for its success. He pointed out the importance in a country district of frequent house to house visitation, with a view to induce parents to send their children regularly to the school….”.

These sentiments were echoed by Reverend Nisbet:

“He hoped that the ministrations of the Gospel in that place would be productive of much good not only to those who attended, but to those who conducted them. He trusted that the residents in the district would embrace their opportunities, and that the chapel would continue to be well attended and supported…”.

“The rev. gentleman spoke at some length, upon the advantage of such a chapel to the neighbourhood, and especially referred to the exertions of the ladies, through whose instrumentality it had been erected, as especially deserving of their thanks. He alluded to the manner in which the Sabbath was too frequently desecrated in the bush of this colony, through the want of places of worship, and dwelt at length upon the influence of churches, and the ringing of the sabbath bell, as a means of arousing people to a sense of their duty, and inducing them to attend religious ordinances. He alluded to the Sunday-school and its importance, alluding to the ladies who had established and who now conducted it, as deserving of all praise from the residents of the district”.

In concluding its report the reporter for the Mercury commented:

“The absence of any defined programme was an inconvenience remarked upon by the ministers and friends present, and we venture to suggest that on future anniversaries, the order of proceedings should be detailed and notice given to speakers beforehand”.
The Mercury’s report suggests that the chapel would have difficulty in attracting a sizeable and sustainable congregation. There are no further reports of anniversary services taking place at the chapel and the last notice of a rostered service was published in 1875. Notices of marriages and funerals continued to published throughout the remainder of the century. In September 1892 The Tasmanian reported:

“Burglars have been busy in the Clarence district, where three places have recently been broken into. The last place is that of the chapel at Risdon, which was broken into, and a cash box robbed of five shillings”.

While services continued sporadically, by the time of the 20th century the history of the chapel becomes difficult to trace. At what point the chapel became known as St Margaret’s or its relationship to the Anglican Church is not known. By the 1950’s it ceased being used but it appears that the church remained under the control of the trustees until at least the late 1970’s. In 1978 Dorothea Henslowe noted that “Perpetual Trustees are the trustees” and that the building “was empty and neglected”.

In 2008 the ABC reported that Millingtons Funeral and Cemetery Services purchased Kingston Lawn Cemetery, St Margaret’s Cemetery and acquired a 50 year lease of Hobart’s Cornelian Bay cemetery; all purchased from the State Government at a cost of $3.9 million. How and when St Margaret’s cemetery came under State control is not known and I assume that the chapel is still owned by Millingtons.

The chapel is now in a serious state of disrepair and the stone steps to the entrance have collapsed. Built in in 1867 the chapel is now over 150 years old and it must be one of the oldest surviving original timber churches in the Tasmania. I am not sure if it has heritage status but it is in now in urgent need of protection and restoration. 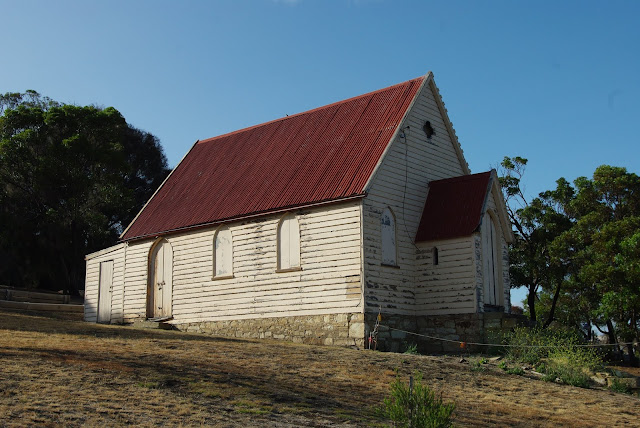 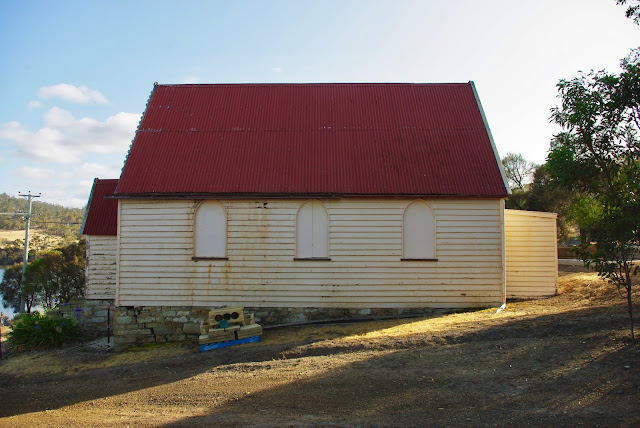 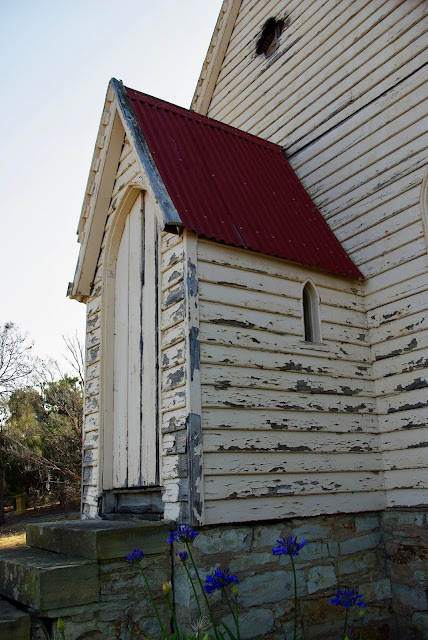 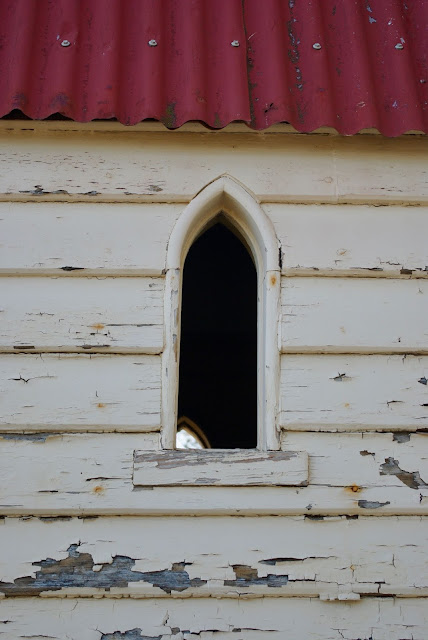 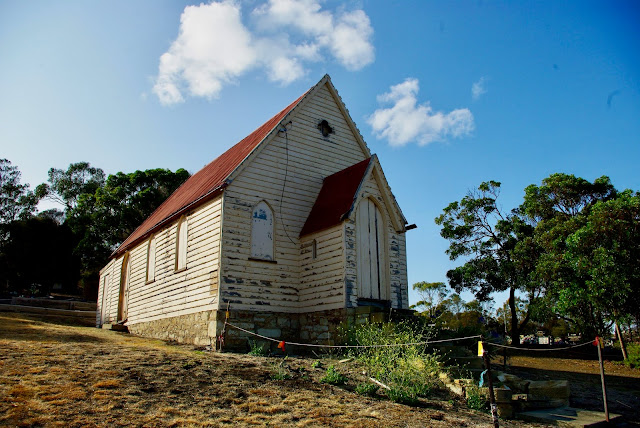 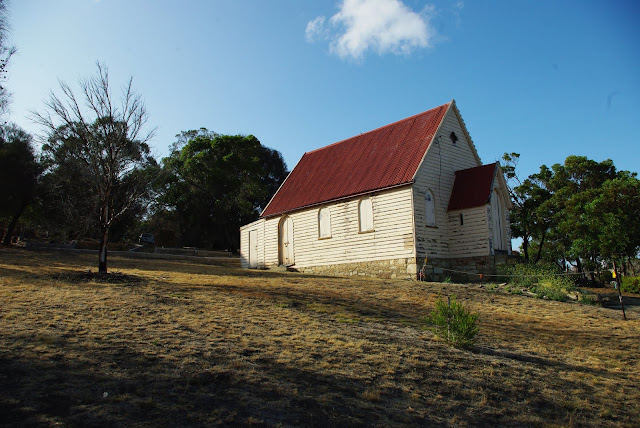 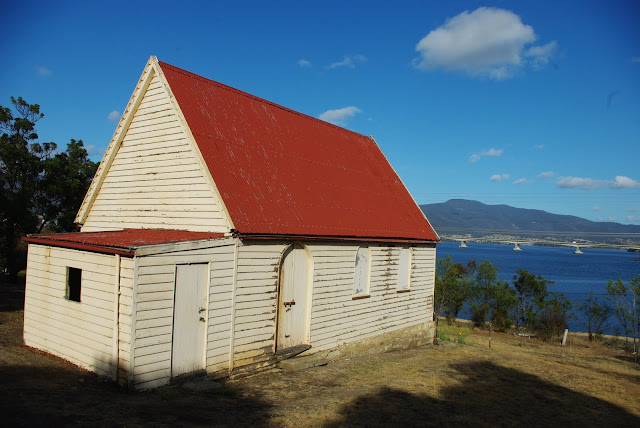 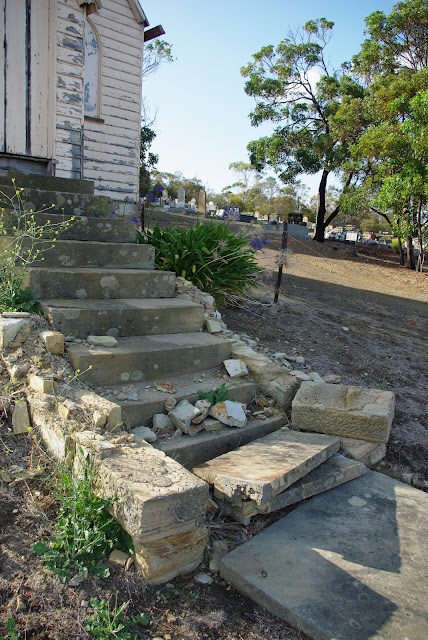 A few of the older headstones in the chapel's cemetery: 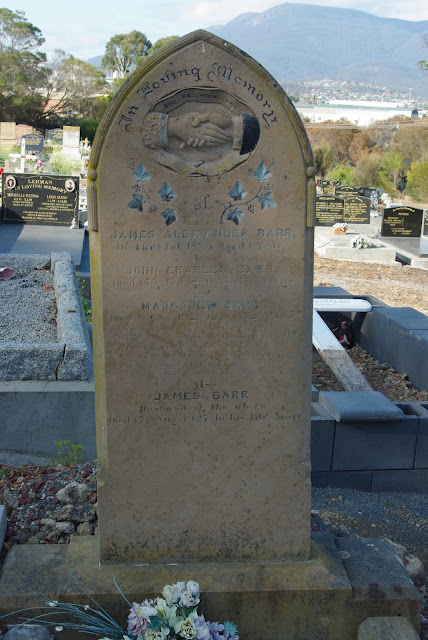 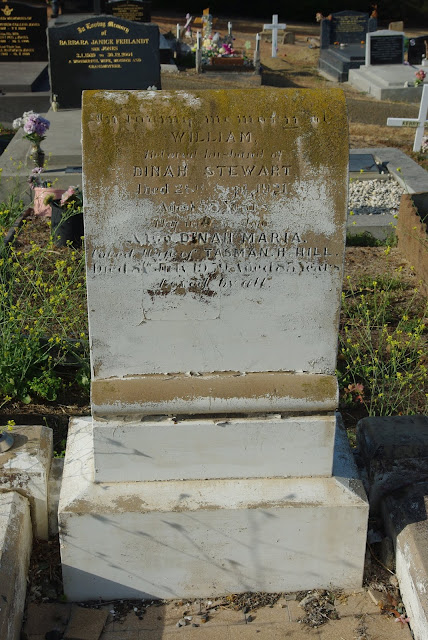 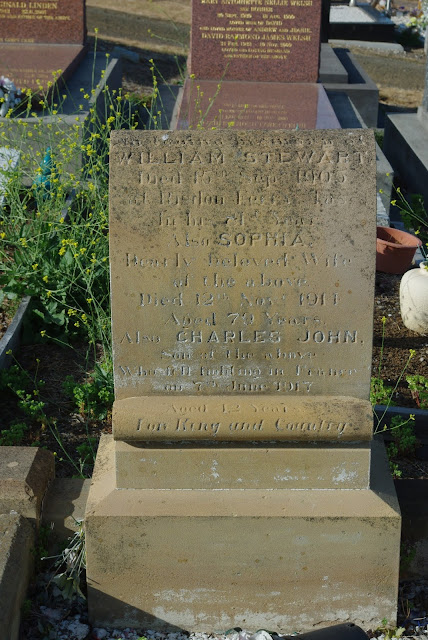 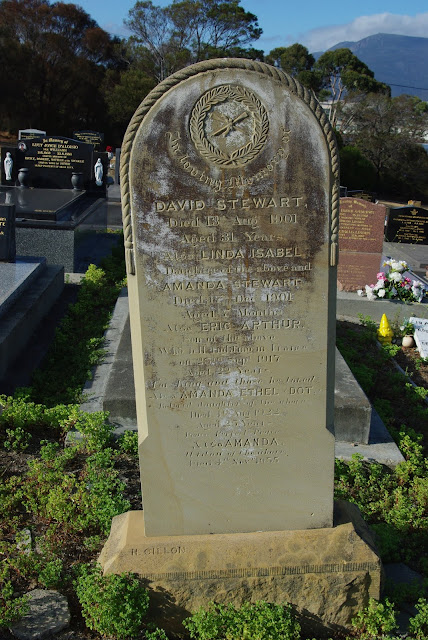 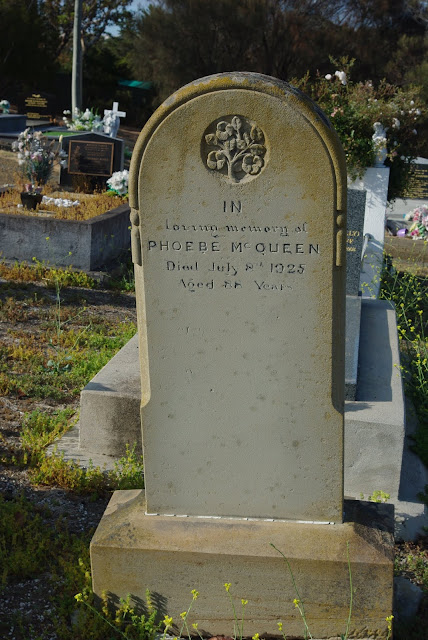 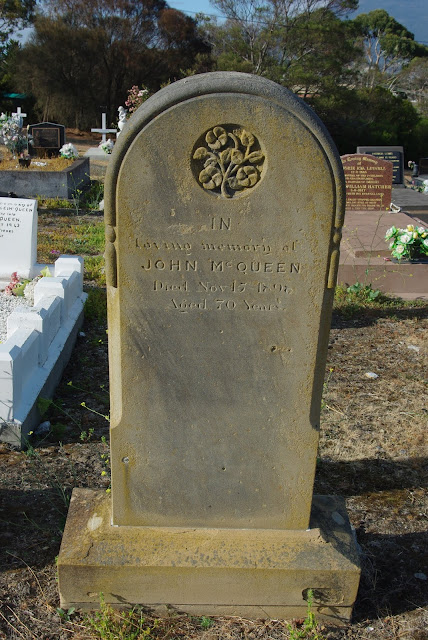 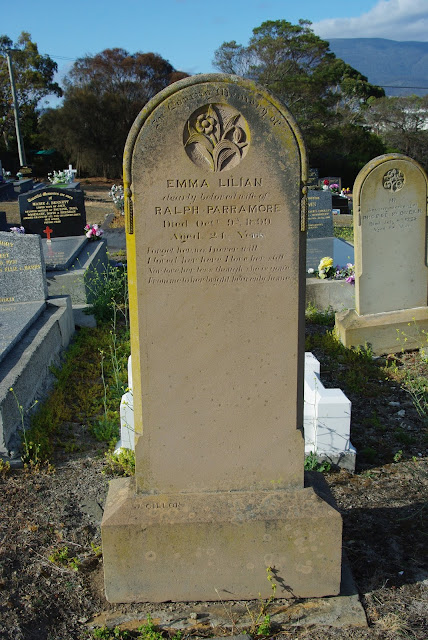 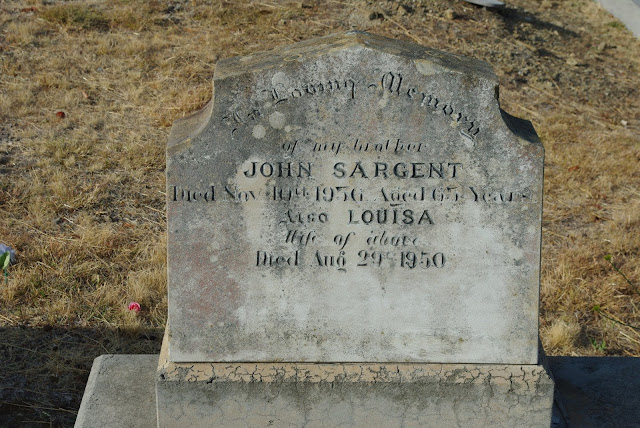 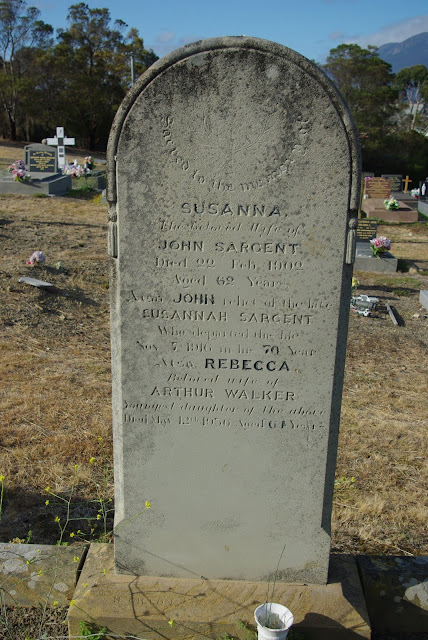 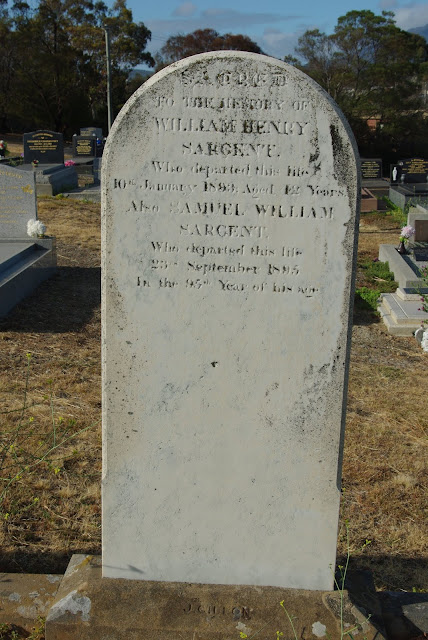