- January 27, 2020
New Norfolk is a historic town on the banks of the Derwent River approximately 40 kilometres west of Hobart. It grew dramatically when settlers from Norfolk Island moved into the district after 1807. When Governor Lachlan Macquarie visited the township he named it Elizabeth Town after his wife. However, it was later decided to adopt the name New Norfolk, to acknowledge the large number Norfolk Islanders.

The Catholic presence in New Norfolk predates the St Peter’s Catholic church by over 60 years. The reason for the delay in building a church is largely a result of the poverty of the early the Catholic community, many of whom were assigned convicts or had qualified for a ticket of leave.

The first Catholic Mass to be held in the township was performed by Father Philip Connolly in 1821. In the mid 1850s, the former Court House in the High Street was purchased by the Catholic Church for the sum of £450 and was converted for use as a presbytery and chapel. The first permanent priest, Father Joseph Sheehy, was only appointed in 1863. In the following year the government granted land to build a church as a consequence of negotiations with Bishop Robert Willson.

Despite this progress another 21 years were to pass before the foundation stone for St Peter’s was laid In March 1885. The Hobart Mercury published an a detailed report on the stone laying ceremony. It is a rich and colourful account which opens a window into Catholic religious life at New Norfolk in the late 19th century. It is reproduced here in full:

“The ceremony of laying the foundation stone of a new Roman Catholic church took place at New Norfolk yesterday with all the fortuitous surroundings which the most ardent friends of the cause could have wished. It was a very important epoch in the history of the district, as the possession of enough money to justify the commencement of the sacred edifice is the result of 20 years of labour of the different priests who have served in the locality from time to time - unwearied labours in a good cause, which have not been abated even when the fruition seemed very far off".

"The building in which services have been held for many years was once used as a police office by the Government, and, though purchased by the Church authorities for their uses when no other was available, it has never been felt that its associations fitted it for them, even if the accommodation had been sufficient".

"Some time since a grant was obtained from the Government for the acre and a-half of land on which the new church is to be built, and £1,000 having been at last collected, the matter grew into a practicable shape. Mr. Hunter, whose best endeavours are always at command in a cause like this, was applied to, and he, in accordance with instructions and the requirements of the promoters, planned a building which will be all that should be required for some time in the way of accommodation, and an ornament to the part of the township where it is to be situated, namely, between the junction of Hill-street and the Crescent and Montagu-street, near the Bush Hotel, and consequently in the best part of the place".

"The church will be in the "late decorated" style, with square headed windows, fitted with tracery, and will consist of a nave 50ft. by 24ft., a chancel 18ft. by 14ft, a sacristy 14ft. by 10ft., with its own little porch attached, and a larger porch for the general congregation 9ft. square. The walls will be 18ft. from the floor, and the height to the ridge of the building, the upper part of which will be open, without ceiling will be 34ft. The building will be constructed mainly of a light brown stone obtained from the estate of Mr. A. T. W. Downie, while the roof will be of Oregon timber".

"The foundations have already been dugout, and were a fruitful source of danger yesterday to unwary pedestrians about the ground. The western gable will be surmounted by a belfry, 50ft. in height from the ground. The people of the district and friends from town responded bravely to the invitation to be present at the joyful ceremony yesterday. From all parts of New Norfolk, far away into Hamilton, Macquarie Plains, and the Ouse, and on in the other direction to Brighton and Richmond, people of all denominations flocked to honour the occasion, and the principal actor in it, the Bishop of Hobart".

"The Monarch steamer, which is an integral part of the life of New Norfolk, was necessarily not absent from the scene, and under charter to the Hibernian Society she bore about 300 people to it, most of whom either by themselves or their parents were connected with the Emerald Isle, and were evidently proud of it by the way in which they wore their decorations of green ribbons and green leaves as emblems of their nationality. The railway people were also present in force, Mr. Falkingham, the contractor for the Derwent Valley line, having generously allowed any of his men who chose to be present to leave their work for the day, and the hop pickers also mustered strongly, also bedecked with green and with branches of the vines which give them their temporary vocation. There must have been at least 1,000 persons present on the ground when the procession, which had started five minutes previously from the Clergy House, arrived at the site. The sun shone out fiercely, and though the day was such a glorious one that it would have been a sin to grumble at it, still the rays of Phoebus were very intense, and made the umbrella a very necessary clerical appurtenance for the nonce".

"First came the members of the Hibernian Society, marching two and two, and wearing their regalia, and then the clergy, in surplices - the Revs. P. J. Hennebry, T. Kelsh, J. Murphy (Franklin), J. Murphy (Hobart), O'Regan, Holehan, Gilleran, O’Reilly, Sheehy, and B. Murphy, the latter being the present pastor of the district. After them followed the venerable Bishop of Hobart (Dr. Murphy) in a gorgeous white and gold cope, and looking very well, notwithstanding his age and many years of hard work in the service of the church".

"Arrived at the ground the Bishop was vested with his mitre, and, surrounded by his clergy and by the people, performed the usual ceremony of laying the stone, sprinkling it with holy water, traversing the boundaries of the church and sprinkling them also, prayers being said and hymns and litanies chanted in the meanwhile. Mr. Hunter, the architect, Mr. John Thurley, the contractor, and Mr. B. Molloy, the clerk of works, all saw that the stone was well and truly laid, the usual documents and papers being deposited in a cavity under it. A sermon was then preached by the Rev. P. J. Hennebry, of New Town, the subject being generally on the Sacrifice of the Mass, and the handsome structures which have everywhere been erected in Its honour and for its convenience, and to the glory of the God who instituted it".

"A collection was then taken up on the stone, and the crowd began to show its bona fides, one after another, men, women, and children stepping forward and handing Father Murphy something towards the fund. The Bishop headed the list with £10, but not even those who could only afford 1s. were ashamed to go forward and hand the trifling contribution to their priest. The result when announced - £225 - was received as it deserved to be with cheering, and then more cheers were given for everybody, from the Bishop downwards. An adjournment was at once made to the Library Hall, where an excellent luncheon was spread, and then the townspeople had to leave, but it was understood that there was a tea to follow, and a concert to wind up the pleasant day's proceedings”.

The church was completed two and a half years later and officially opened in November 1887 on the Prince of Wales birthday, a popular public holiday. The press coverage of the event was less exuberant than at the time of the foundation-stone laying ceremony, which was probably a consequence of the holiday.

A feature of the new Norfolk parish was its size which covered Hamilton, Bothwell, the Highland Lakes, Ellendale, Hamilton and Ouse. In later years a convent school, St Brigid’s, was opened and a presbytery was built next to the church. The church has changed little in appearance since it opened in 1887 and many might agree that the striking Henry Hunter designed building was worth the long delay New Norfolk Catholic’s endured before they got their first church. 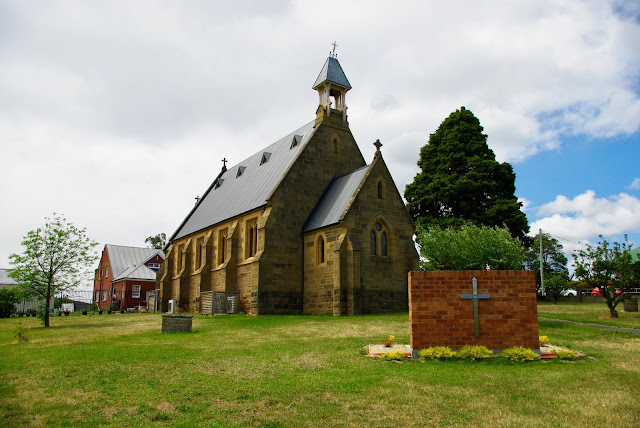 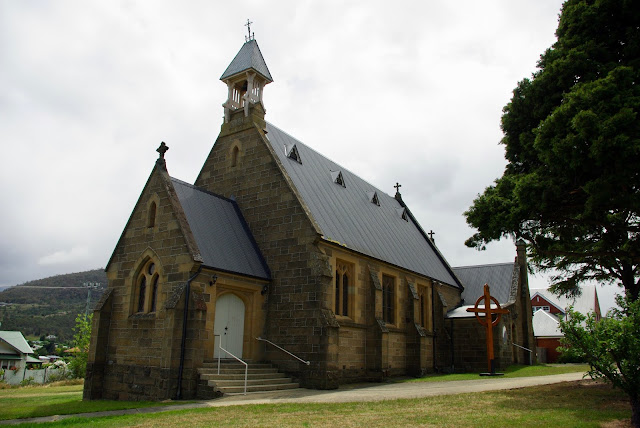 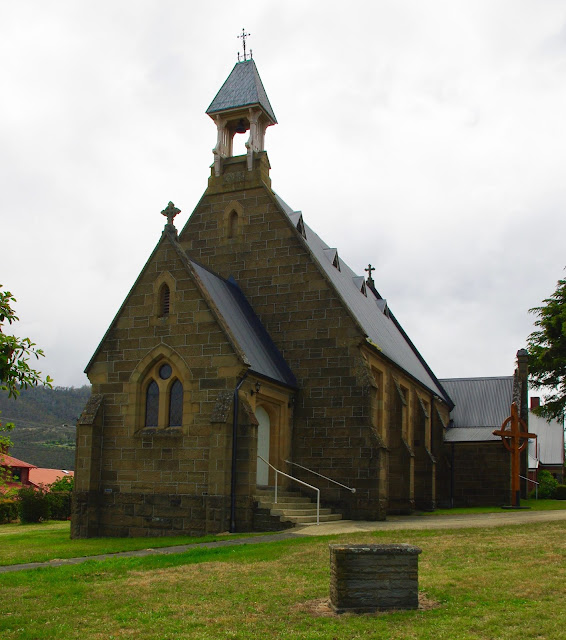 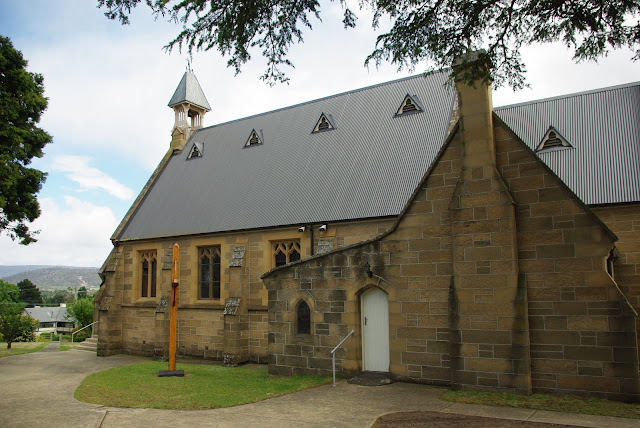 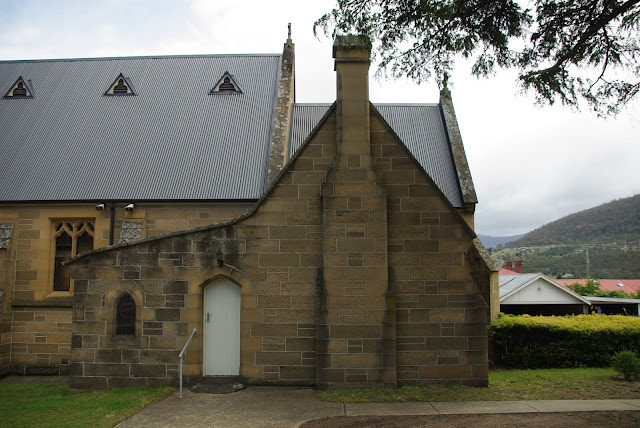 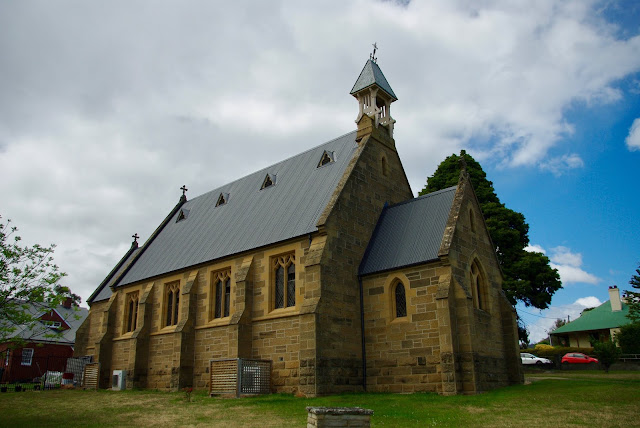 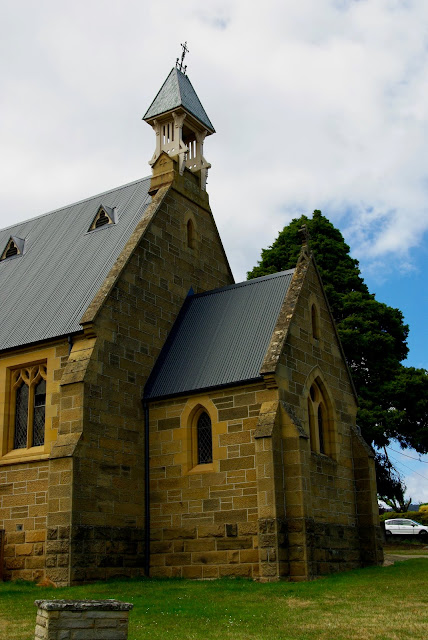 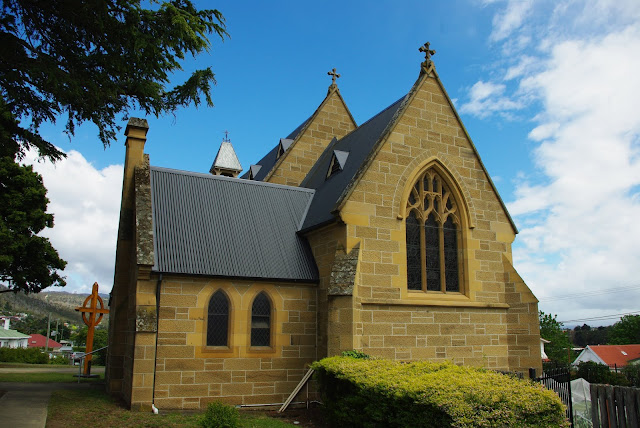 St Peter’s Hall is situated within St Mary’s Cathedral precinct at the corner of Harrington and Brisbane Street. The building originally stood on lower Collins Street before it was dismantled and reconstructed at its present site in 1904. St Peter’s Hall was built in 1855 as a temperance hall and school house as well as for occasional religious services. It is marked on Jarman’s 1858 map of Hobart where it is listed as a Catholic chapel. Two 19th century ‘birds-eye’ views of Hobart (see below) clearly show details of the building which was accessed by a footbridge across the Hobart rivulet. Lower Collins Street fell within a district known as Wapping, which was one of Hobart’s poorer quarters located close to the docks. This article draws from newspaper accounts from the 1850s which describe the halls construction and opening as well reports from 1904 concerning its removal and reconstruction near the cathedral. The Colonial Times records the laying of the foundation stone of St Peter’
Read more