- April 11, 2020
Ridgley lies approximately 15 kilometres south of the city of Burnie and in recent years the settlement has become a commuter suburb. Ridgley was originally a small farming centre established in the 1880’s by the Van Diemen's Land Company. The town has been well served by a number of religious denominations including Anglican, Methodist, Catholic and Christian Brethren.

The Ridgley Bible Chapel, previously known as the Hebron Hall, was established in 1941 by a group of ‘evangelical Christians’. In September of that year the Advocate reported:

“For the past month or so residents of Ridgley have been interested in the erection of a new hall by a company of Christians which formerly met in the Public Hall. The building is now ready for use, and special meetings to celebrate the opening will be held over this weekend…. A large number of visitors are expected from all parts of the island, and the public is invited to attend these and subsequent services”.

While the opening services held on the weekend of 13 and 14 September were advertised in the Advocate, no published record of the event appears to exist. However, the Hall was featured in the news in November 1941 as it was targeted by ‘larrikins’ who appear to have terrorised several of Ridgley’s churches during the early 1940’s. The Advocate’s report on the Police Court’s proceeding provides a glimpse into the problem of larrikinism, which was a persistent and longstanding problem in most towns across Tasmania. The report makes interesting reading:

“Detective-Sgt. H. J. Gibbons prosecuted, and the defendants pleaded guilty. The complaint against Short was that he disturbed a congregation of persons in tho Hebron Hall by throwing a stone on the roof….After the stone hit the roof, two members of the congregation went outside and saw several young men in the street. They asked them not to throw stones on to the church. They promised it would not occur again. Detective-Sgt. Gibbons said that for a number of weeks at Ridgley about three gangs of young men, with four members in a gang, had laid themselves out to upset church services on Sundays. One minister of religion had told him it was an accepted part of the service to receive a visit from the young men. Sometimes they sounded motor horns or threw stones on the roofs of the buildings. They had even gone so far as to fasten the wheels of cars to surrounding fences. A deputation from Ridgley had waited on the police with the request that the larrikinism be suppressed”.

“Short, when interview by the police, admitted throwing the stone, said Detective-Sgt. Gibbons. In a statement made by the defendant he said he was in the company of five other youths, and threw the stone as the result of a bet. Burley was charged with having distracted worshippers at the Methodist Church on the same day, by sounding the horn of a motor car parked nearby. …[The] defendant, with five other young men, was seen in the vicinity of the church by Senior-Constable Hills and Trooper Smith. The others got over a fence, but defendant [the] doubled back and got into a car and blew the horn. When apprehended he at first denied knowledge of the incident, but finally admitted he was responsible. Detective-Sgt. Gibbons added that at this particular church youths had been known to bowl stones along the floor, and to "rotten-egg" the minister when returning to Burnie. It had been difficult for the police to apprehend the culprits. One of the defendants had admitted that the youths had"advance parties" stationed at various centres”.

"The [Police Magistrate] said the practice had to be put down. He hoped the fines would act as a warning, not only to youths of that particular district, but, in other centres. Churches were entitled to respect from persons not actually engaged in religions services. Having regard to the fact that neither of the defendants had been before the court previously, the P.M. said he would not send them to gaol, but would fine them the maximum penalty for the offence, which was £5. Each was allowed 14 days to pay”.

There are no further reports of activities of larrikins harassing Ridgley’s churches and the Hebron Hall similarly fades from the news. At some point the Hebron Hall was extended and the original building effectively rebuilt with a brick veneer exterior and renamed the Ridgley Bible Chapel. The church, which is due to reach its 80th anniversary in 2021, now falls under the umbrella of the Christian Community Churches of Australia, a network of churches, or “assemblies”. The ‘community churches’ do not form a denomination in the organisational sense, but rather a network of like-minded autonomous local churches. 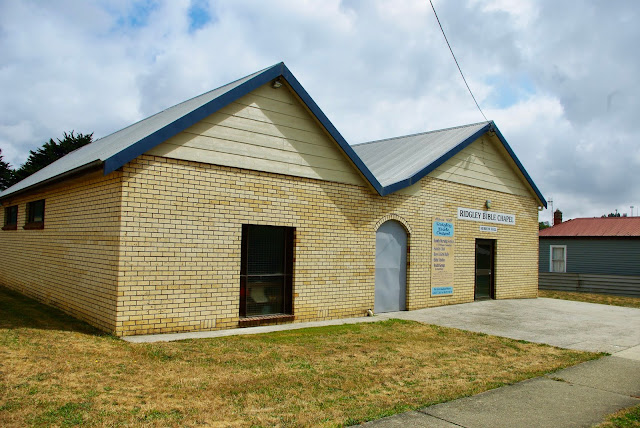 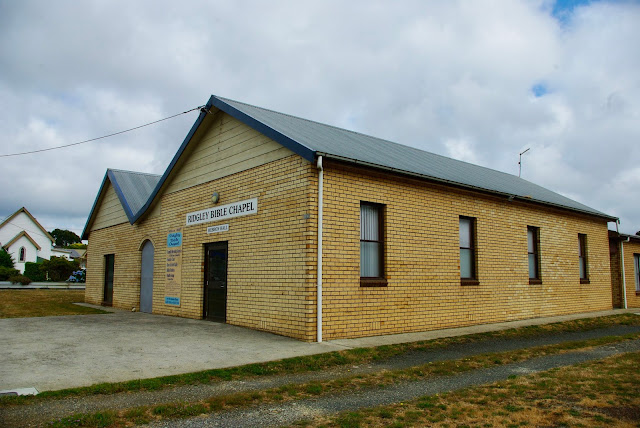