- April 21, 2020
Springfield is a rural settlement on the Tasman Highway west of the town of Scottsdale. When it was first settled in the mid-19th century it was a saw-milling and timber producing area then slowly turned to farming. Springfield and neighbouring South Springfield have been well served with places of worship which have included Anglican, Methodist and Presbyterian churches as well as a Union Church and a Gospel Hall.

An article in Launceston’s Daily Telegraph describes the settlement at Springfield in the early years of the 20th century and also provides the location of two of the settlement’s former churches:

“Agriculture generally receives as full attention as conditions in Springfield country will permit. Its hilly and broken formation, while rendering ploughing a task, do not militate against grazing, and, of course, dairying. Many farmers find it easier to drive a fat beast to market than to cart cereals. Again, cattle may be prepared for sale irrespective of season, and farmers are quick to realise that fact. Comfortable homesteads catch the eye and claim attention. Even a drive along the main road is sufficient to convince one of the value of this division of Scottsdale municipality. Church interests are in the hands of the Methodists and Presbyterians, while the State school to meet the requirements of the district, is located on Orcheston-road [?], leading to Springfield South. The post-office and Methodist church are in close proximity to each other on the Springfield route, and the Presbyterian not a great distance from both”.

Springfield’s Presbyterian church was built in mid 1880 and likely opened by early 1881. No record of an opening service appears to have survived but a report in the Launceston Examiner in September 1880, concerning the Free Presbyterian Church, notes that “a new place of worship was nearly finished at Springfield, in the Scottsdale district”. The first detailed report of the church is found in the Examiner in January 1882:

“On Tuesday evening public worship was conducted in the church at Springfield, in Upper Scottsdale, by the Rev. J. Lindsay. This is also a recent erection, reflecting credit on the Christian enterprise of Mr Robert Tulloch and his neighbours in that interesting district. Public worship, a Sabbath school and day school (the latter under the efficient care of Mr Farquhar, teacher) are steadily and regularly carried on to the….benefit of the neighbourhood”.

The church served the Presbyterians at Springfield for almost 70 years. During this time there is little information of any import about the church aside from a reference to a concert held to raise funds to purchase seating (1887) and fundraising in 1903 to paint the interior of the building. The date of the last service is not known but by the 1940’s it was no longer being used. In May 1949 an advertisement calling for tenders for the church’s sale and removal appeared in the North Eastern Advertiser.

The church was removed to Herrick shortly after where is was renovated and reopened in 1952 as a Presbyterian church at that settlement. The history of the church at Herrick will be the subject of a follow-up article on ‘Churches of Tasmania’. 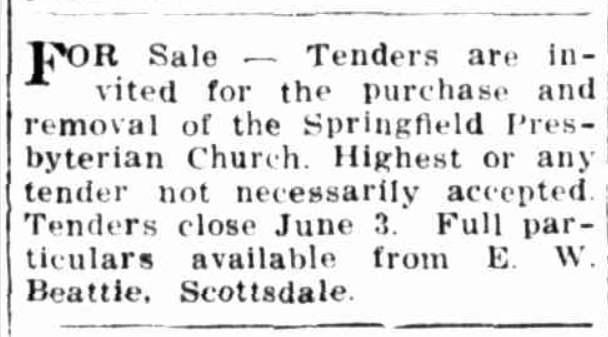