- May 03, 2020
Claremont is a suburb of the City of Glenorchy and a part of the greater Hobart area. It is named after Claremont House, which was built in the 1830s by local settler Henry Bilton. Claremont was the home of an Army training facility during World War I. The site is now substantially occupied by the Cadbury housing estate, the Cadbury Factory and Claremont Golf Club.

When thousands of troops enlisted in the First World War, a training camp was immediately established at Brighton. A lack of water proved to be a serious problem thus after the first continent left in October 1914 a new training camp was set up at Claremont. It was conveniently located on the railway line and near to the embarkation port of Hobart.

The camp or ‘tent’ city as it was termed, accommodated up to 2200 men and was self-sufficient with a laundry, dental surgery, hairdresser, fruit shop and a Post Office. In 1916 the YMCA opened two buildings in the camp, one measuring 70x30 feet that was used as a social hall for concerts and indoor games and a second building which was divided into a chaplain’s hall for religious services and a large ‘writing room’ and an officers’ club room. In April 1916 the Launceston Examiner reported the imminent opening of the second building which was dubbed “The Hut of Silence”:

“The "Hut of Silence" recently erected at Claremont Camp by the Y.M.C.A. Field Service, is to be opened by the Governor, Sir William Grey Ellison-Macartney, on Wednesday afternoon at half past 4 o'clock. The new building, 97ft. x 35ft., will contain a much-needed quiet room for correspondence. Measuring 30ft by 25ft., the room will accommodate 150 to 200 men at a time….in spite of the distractions of games and sing-song in the same apartment, the quiet room should be appreciated, and add greatly to the comfort and convenience of the troops…. The building also contains a chaplains' hall, 45ft. by 35ft., with four smaller rooms for personal interviews, chaplains' winter quarters, etc. Tasmania has won unique distinction for the spirit of harmony and good fellowship hitherto existing among the representatives of the several churches; and the Y.M.C.A. building at Claremont has been freely used by Anglican, Roman Catholic, Methodist, Presbyterian, Baptist, and Congregational chaplains. Many northern folk who are interested in the Y.M.C.A. field service works will be present at the official opening”.

After the war the camp was closed and the buildings dismantled and removed in sections. In early 1919 the “Chaplain’s Hall” was removed to Arthur Street, West Hobart, where it was to be used as a temporary Anglican church prior to the construction of St Michael and All Angels’ Church Hall built on Franklin Street. The temporary Arthur Street church became the subject of considerable controversy and this will be the subject of a follow-up article on ‘Churches of Tasmania’. 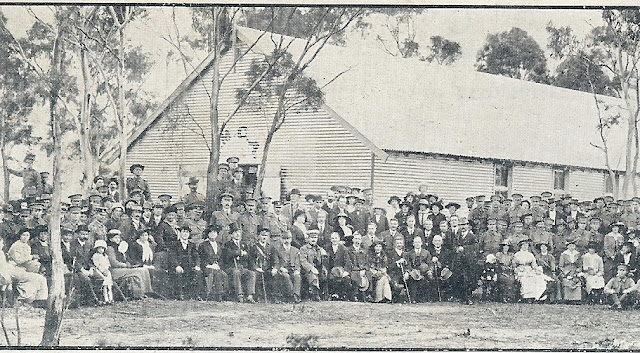 And interesting description of the camp written by Reverend F. J. Rankin can be read on the linked article <HERE>