- July 05, 2020
The ‘Young Men’s Christian Association’, an international movement for 'the spiritual, intellectual, social, and moral improvement of all within its reach', reached Tasmania in the late 19th century. The Association was formally established in Launceston in 1880 and Hobart in 1882. It was open to all boys and young men and promoted all-round development by providing activities such as social meetings, concerts, debates, lectures, reading and games. It encouraging sport, including boxing, soccer, gymnastics, swimming and walking. In earlier times most of its activities were grounded in prayer meetings, Bible classes and mission work. While the YMCA is no longer an exclusively male organisation, its mission is still founded on Christian values and to provide opportunities for the young to grow in body, mind and spirit.

The association was introduced to Hobartians in June 1878 by the Reverend Dr. A. N. Somerville, who was then on a world tour. He delivered a lecture in the interests of the newly-formed association in the Town Hall, and at the close of the meeting made a strong appeal for contributions towards a building fund. This however proved to be a false start and was not until April 1882 that the organisation was revived and the Association became established in rooms above a shop on the northern corner of Liverpool and Murray Streets. In 1885 this building was purchased and remained the YMCA’s home until 1901 when it moved to temporary premises at the western corner of Elizabeth and Liverpool Streets.

In March 1906, the foundation stone for a new building was laid by the Bishop of Tasmania, Dr. Mercer, at a property located on Murray Street. By 1918 this building was outgrown and was sold to the Returned Soldiers’ Association and the YMCA again moved into temporary premises until a new building was constructed on the corner of Liverpool and Argyle Streets in 1921. This building was extended in 1922 with the addition of a Naval Hostel and Gymnasium and it was again extensively rebuilt between 1948 and 1950. In 1953 a War Memorial Chapel was built in the upper storey of the building. A report of the chapel’s opening and dedication was recorded by The Mercury:

“In the presence of the Governor (Sir Ronald Cross) and a large as assemblage of citizens, a war memorial chapel was officially opened and dedicated at the Hobart Y.M.C.A. yesterday. The dedication ceremony was performed by the president of Tasmanian Council of the World Council of Churches (Archdeacon W. R. Barrett), the memorial tablet in the chapel was unveiled by the Governor, and the dedication address was given by the Rev. I. Maggs, a director of the Y.M.C.A….. In 1949, the directors launched a public appeal for funds to modernise and extend the premises as a war memorial, and, assisted on a £ for £ basis by the Government, the appeal was successful”.

“One part had yet to be completed - the most important of all because without it the building would have no soul. That was to dedicate the chapel to the glory of God, he added. Archdeacon Barrett then dedicated the chapel "to the glory of God and to the members of the forces who served and suffered in two world wars.” The Governor said that it was with pride and humility that he unveiled the tablet, but added that such memorials were reminders of tragedies and sacrifices….”.

In keeping with its itinerant tradition, the YMCA was to move from the Argyle Street building in the 1960s. The property was then used as a police cadet training college in the 1970’s before the establishment of the Rokeby Police Academy. The building was demolished in the 1990’s to make way for the current Hobart City Police Station. 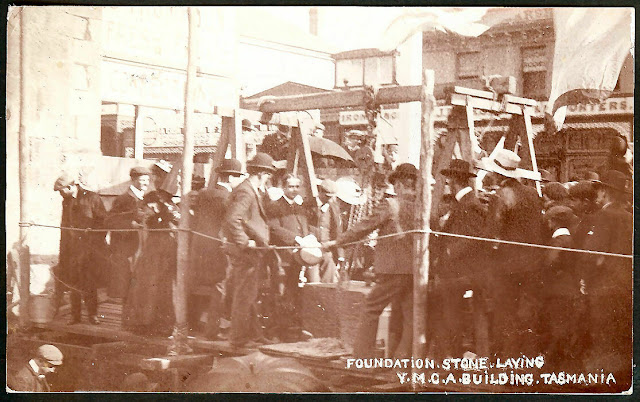 A postcard commemorating the laying of the foundation stone in 1907.
Sources: