- August 08, 2020
Sandford is a semi-rural district of Greater Hobart on the South Arm Road approximately 15 kilometres from Bellerive. It was previously known as Muddy Plains before the name was changed to Sandford in 1886.

In 1885 the local correspondent for The Tasmanian News wrote:

“It is….the intention of the inhabitants to get the name of the place changed. It is, to begin with, ugly and inappropriate, besides which there are several other places in this colony bearing the same name. Our member has been asked to move in the matter, and the hope is expressed that he will not fail to take the necessary steps to get the name of the place changed. "Sandford" has been suggested, and I believe would be acceptable to the majority of the residents”.

Some sources claim that when the Bishop of Tasmania, the Right Reverend D. Fox Sandford, visited Muddy Plains in the mid 1880s, he commented on the inappropriateness of its name, and in jest said, "Why not call it after me?”

Anglican services at Sandford date back to at least the early 1880s but almost half a century were to pass before a church was built. In 1885 the local correspondent for the Hobart Mercury wrote:

“The Rev. J. Rousell conducts a service nearly every Sunday in the public schoolroom, having a large congregation. His ministrations are much and deservedly appreciated. The schoolhouse is pleasantly situated, is commodious, and has, I am pleased to say, that evidence of civilisation, a flower garden in front".

In 1887, presumably the same Mercury correspondent, was not so subtly campaigning for a church to be built:

“I am glad to report that the name of this place, which has been so long known as Muddy Plains, in the district of Clarence, has been changed for that of Sandford by the desire of the inhabitants, and through the agency of our worthy member, Mr. Jas. Gray, the alteration has been made….The above name, officially given long since, though until now unused, except in official documents, is appropriate in honour of Bishop Sandford, and no doubt the right rev. gentleman will feel honoured, and as the members of the Anglican Church here are numerous, and there is no Church of England at Sandford, I have thought that we might commemorate the jubilee reign of of Her Majesty Queen Victoria by commencing to build one, and as two gentlemen have offered to give the land, and others to contribute to the building fund, I would suggest that a meeting be called to consider the matter, form a building committee and so forth, and that the Bishop be asked to preside at such meeting, and give us the benefit of his advice, and counsel how best to proceed in the matter”.

However, Queen Victoria’s Golden Jubilee was to pass without a memorial of any sort being erected at Sandford. Thirty years later, it was the Great War that proved to be the catalyst for a church to be built.

The foundation stone was ceremonially laid on Saturday 3 May 1924. The event was recorded by the Mercury which reveals the origins of the church:

“At the conclusion of an impressive ceremony at Sandford on Saturday afternoon, Archdeacon Whitington declared the foundation stone of the Church of England Soldiers' Memorial Church, which is in course of construction, to be "well and truly laid." The weather was ideal for the function, and in consequence a large number of people were present from Bellerive, South Arm and Rokeby, and also a sprinkling of visitors from Hobart".

A little over two years ago a representative public meeting was held at Sandford to discuss the operation of the erection of a suitable memorial to the men of the district who served in the war, and after a prolonged discussion, it was unanimously agreed that a memorial church would fill a more useful purpose than any of the other forms of memorial which at that time were being erected in different parts of the States. Plans were prepared and tenders invited, and that submitted by Messrs. Norman Wright and Son, contractors, was accepted. It provided for a brick building on concrete foundations, with seating accommodation for 150 people….”.
“The inscription on the foundation stone, which was laid in position by Archdeacon Whitington, after he had read a short prayer, is as follows: To the greater Glory of God and in grateful memory of those who fought in the Great War, I914 -1918”.

“It was a source of great satisfaction to him that the church was being erected in memory of those who served in the war and not simply of those who did not return. All were worthy of remembrance, and there, in that beautiful spot as yet undefiled by the hand of man, they could erect a structure to the Glory of God, and as a tribute to those who had proved themselves”.

“The Diocese was under an obligation to Messrs. Robert and Henry Calvert, of South Arm, who had given them more than an acre of land on which to build the memorial church, and he desired personally to thank those gentlemen for their generosity. When the time came for dedicating the church, he thought it should be to one of the soldier saints and none would be more suitable than  St. Martin. That matter, however, could be discussed later….”.

The church was completed in the same year and dedicated on Sunday 28 September:

“The Bishop of Tasmania (Right Rev. R. S; Hay) yesterday officially dedicated the Anglican Church at Sandford, the erection of which has just been completed. Erected as a memorial to the men of Sandford and South Arm who enlisted for active service in the Great War, the church stands on a rise a hundred yards or so off the main road from Bellerive to South Arm, an area of one and a quarter acres of land, portion of the Lauderdale estate…. It is a handsome little structure. Brick for the most part has been employed in construction, and the roofing is of iron. The ceiling is in polished Tasmanian oak and the furniture is of the same kind of timber. The building is 48 feet in length and 23 feet in width exclusive of vestry and porch. A handsome rose window at the eastern end adds very considerably to the appearance of the interior, while one with coloured panes at the opposite, end, presented by Mr. C. H. Wood, is most effective. One commemorates the memory of the son of Mrs. J. Bowden, who was accidentally drowned last February. The furnishings, font, pulpit, pews, and other fittings are artistic examples of architecture, and were designed by Messrs. Salier, Glaskin, and Richards, and manufactured, by the contractors (Messrs. Norman Wright and. Son) in their workshop at Claremont. The font was presented by the family of the late Mrs. C. G. Morrisby, and is a very acceptable gift. A most gratifying feature is the fact that the church stands completely free of debt. ….The building committee consisted of Rev. H. C. Brammall, Messrs. O. J. Morrisby. J. R. Lazenby, C. H. Wood, H. E. Alomes, A. Calvert, O. Calvert, and S. Haynes. Every satisfaction was given by the contractors, Mr. Norman Wright having designed and personally supervised the erection of the building.…”.

The report goes on to describe the dedication ceremony:

“Nearly 200 persons gathered from all parts of Sandford and the adjoining district of South Arm to attend the service, a large number of motor cars, lorries, and other vehicles being "parked" outside the church…. After having dedicated the building us the Church of St. Martin, and the altar and font, the Bishop from the pulpit congratulated the people on the “erection of such a splendid little building," as he described it, …The church should be dear to them for many reasons. In the first place it stood as a memorial to the men who had enlisted and laid down their lives in the Great War, the memory of whom would never be forgotten, and it also stood as a witness of God's work, and a reminder that He always existed. There were many sins in the world - drunkenness, gambling, impurity, and so on - but the great parent sin was forgetfulness of God, a sin that was reflected in society more than ever at the present day… reminding him of desirable things that memorials were built…”.

It is with some irony that the church built in memory of those who served, was closed and sold in 2017, a year before the centenary commemoration of the conclusion of the Great War. The church and its hall, formerly St Jude’s at Seven Mile Beach, are now the premises of Tasmania’s oldest karate club, International Karate-Do.
* All photographs used in the article are my own - apart from the photographs of the interior which are of courtesy of Roberts Real Estate - Sorell. 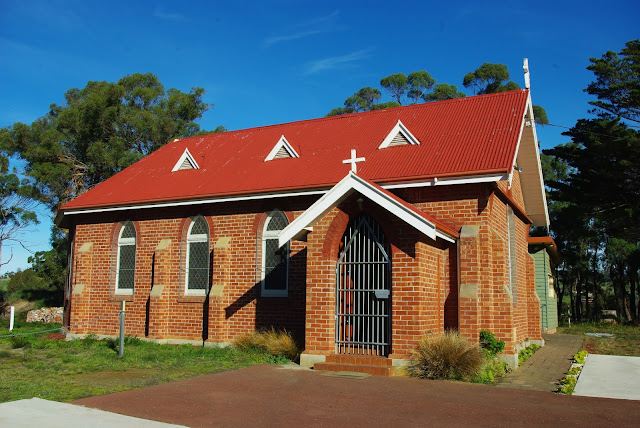 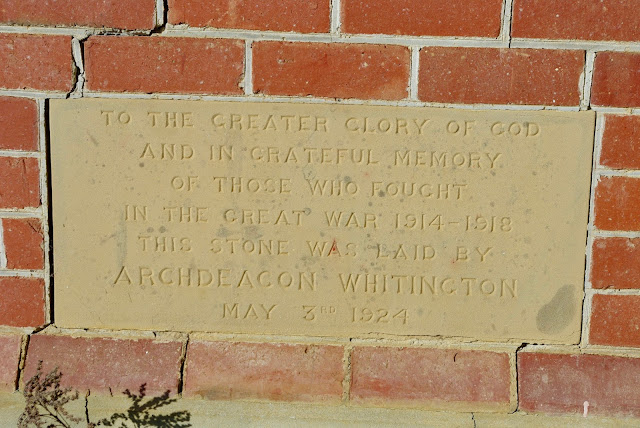 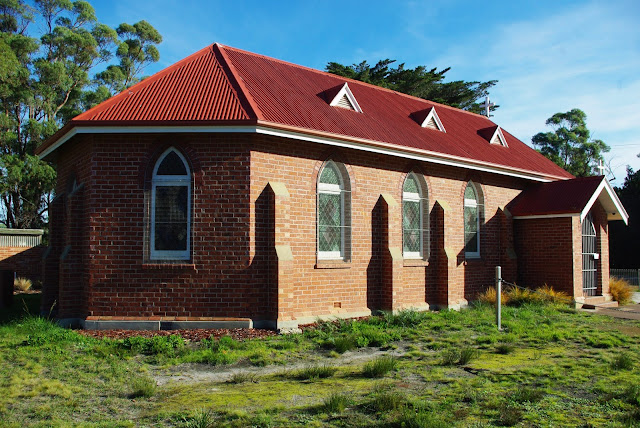 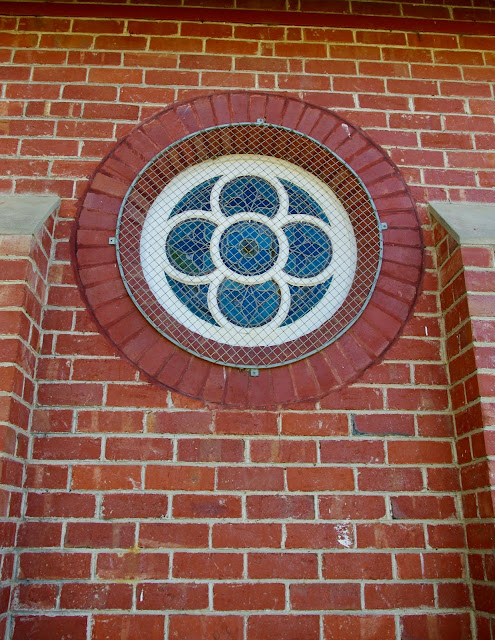 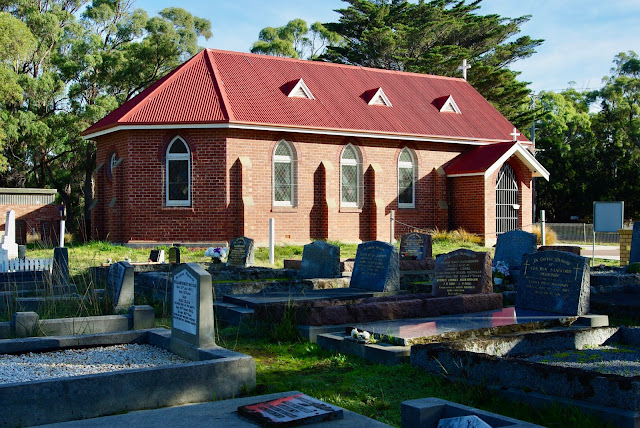 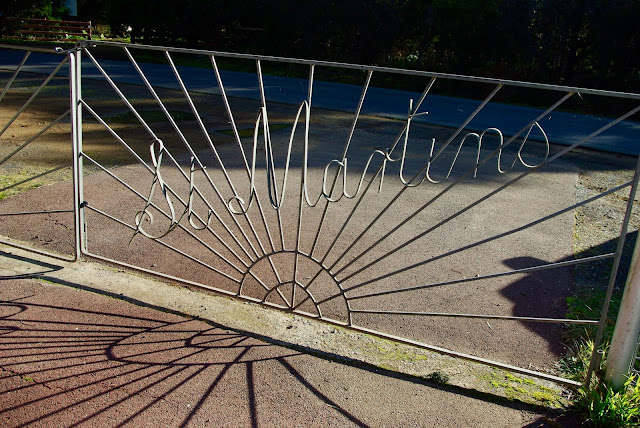 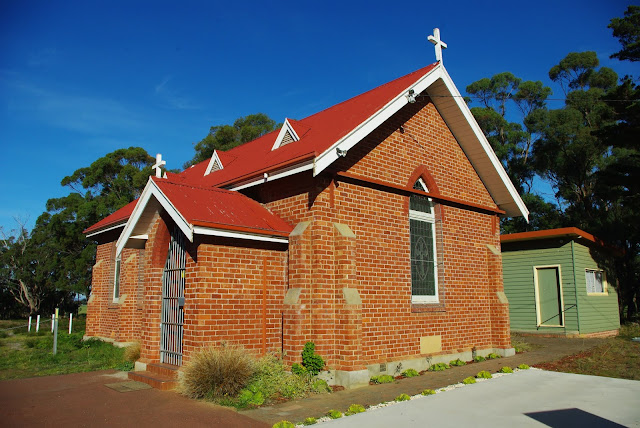 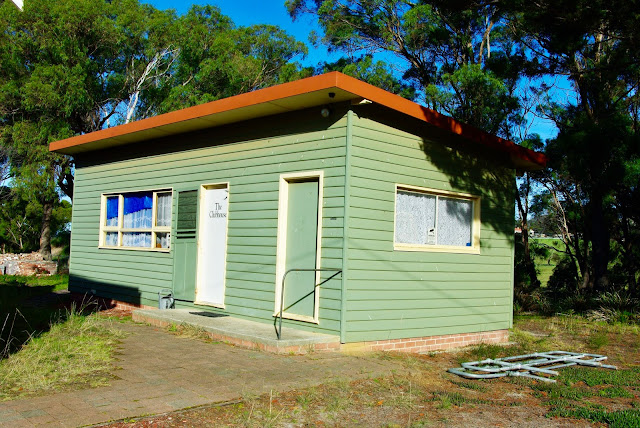 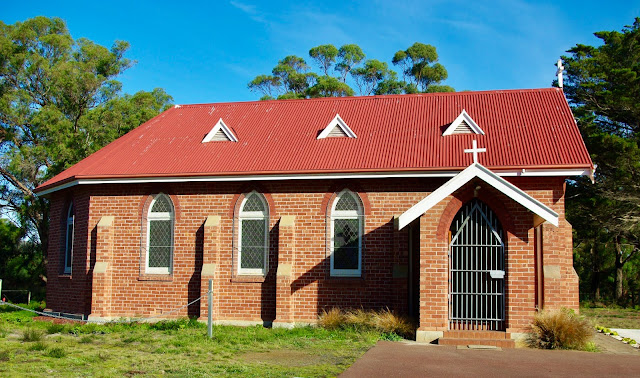 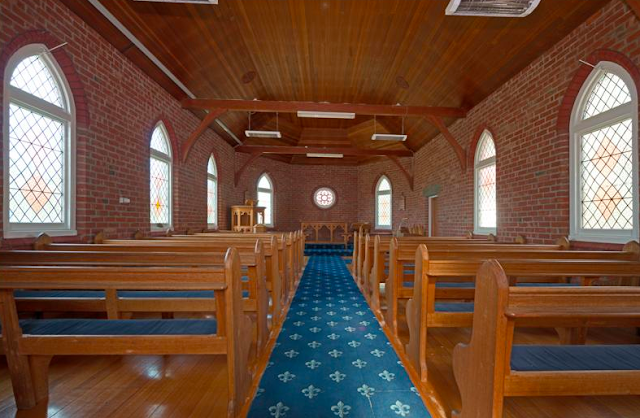 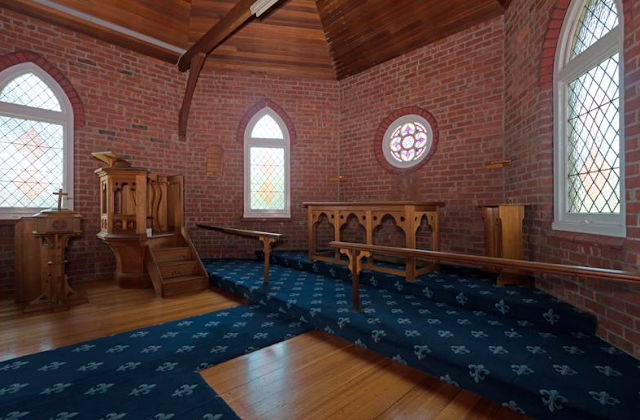 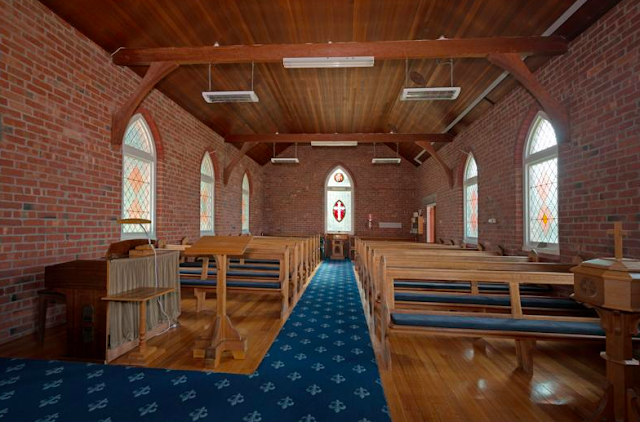 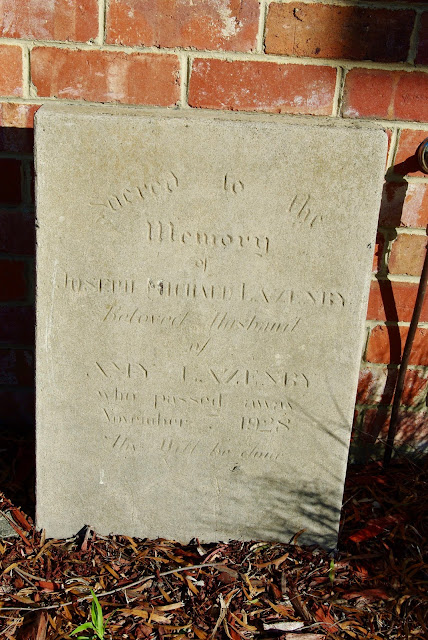 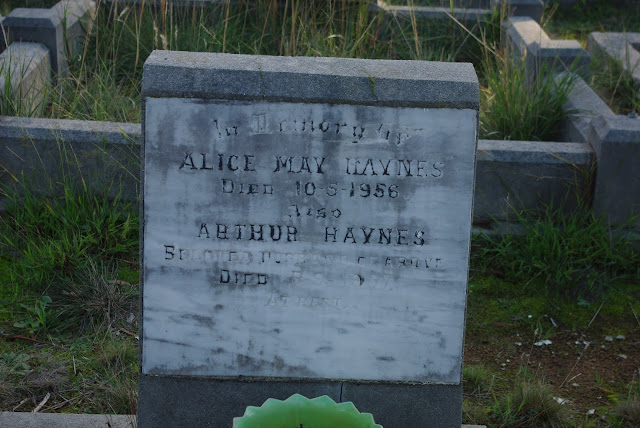 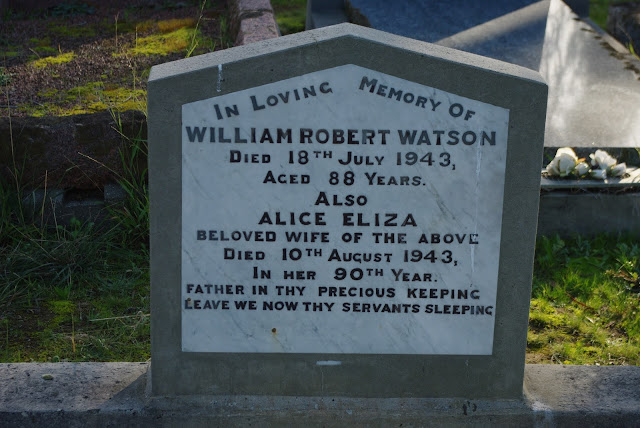