- August 20, 2020
Bellerive is a suburb of Hobart on the Eastern Shore of the Derwent River. Originally it was named Kangaroo Point but in the 1830s this was changed to Bellerive, meaning ‘beautiful shore’.

St Mark's was built in 1851, purportedly on the former site of a "Chapel of Ease”. One of the earliest reports of Anglican services at Kangaroo Point date back to 1826 when The Colonial Times and Tasmanian Advertiser reported that Reverend Knopwood, chaplain for the district of Clarence Plains, “regularly performs Divine service every Sunday at that settlement and Kangaroo Point”.

By the 1840s there seems to have been no formal place of worship as Anglican services were reported to be held in a school room. In 1845 The Tasmanian and Austral-Asiatic Review reported that a Sunday school had been established at Kangaroo Point that was:

“Conducted with unremitting industry industry by Mr. and Mrs Lane, the industrious schoolmaster and schoolmistress, consisting of fifty children of the middle and working classes”.

In January 1851 the newly appointed chaplain of Clarence Plains, the Reverend W Murray, initiated actions to secure land for a church. In February the Colonial secretary advised the Church of England authorities that Governor Denison had approved a grant of three acres for the erection of a church.

The church was built by “Mr. Pitfield of Hobart Town” and is supposedly based on the plan of St John the Baptist in West Hobart, built in 1845. St Mark’s was completed by mid 1852 and consecrated in a ceremony, attended by Governor Denison, on Tuesday 1 June . The occasion is recorded in three of Hobart’s newspapers. The most detailed of these is a rather report which appeared in the ‘Hobarton Guardian’, most of which is reproduced here:

Consecration of the Chapel of St Mark, Kangaroo Point

Those temples of our God,
How beautiful they stand;
The glory of our age,
The bulwarks of our land.

This neat little edifice was publicly set apart for Divine Worship, and other Ecclesiastical purposes, by the Bishop of Tasmania, on Tuesday last, the 1st of June instant. We have often witnessed the splendid and imposing ritual of the Church of Rome; but were never present at a more impressive and interesting ceremony, than the dedication of this building to the worship of the Most High,—interesting, not only from its beautiful simplicity, but from the associations connected with it.

Previously to the creation of the Chapel, the inhabitants had assembled for worship in the School-Room, the use of which was kindly granted by the proprietor, Mr. Lane. A desire for a place of worship, on a more permanent footing, had long been felt; but it was not until within the last few months, that steps were taken to effect this object. At last, owing to the exertions of the minister, the Rev. W. W. F. Murray, M.A., aided by the inhabitants, it has been accomplished. A grant of land was obtained from the Government, and the Chapel erected.

The Chapel stands near the residence of the minister, on the road leading to Clarence Plains. From the summit of the hill, at the foot of which it is situated, the scenery is of the most beautiful and striking description. On one side, is the Township of Bell Rive, with the newly built Chapel (from the summit of which floated the flag of England), and its pretty bay dotted over with the various river craft, together with the distant hills, covered to the summits with luxuriant vegetation; on the other, the noble Derwent, glittering in the rays of the morning sun, like a mirror of burnished steel, and proudly bearing on its bosom the winged chariots of the deep; — whilst, on the opposite bank, the metropolis lay bathed in the sunlight, and in the distance, Mount Wellington formed a rich back-ground to the lovely Panorama. We though, as we gazed on the beauteous landscape, how, a few years since, a dense forest, through which roamed the naked savage, had covered the land, —

When the sound of the church-going bell
These valleys and rocks never heard;
Never sighed at the sound of a knell,
Or smiled when a Sabbath appeared.

And it would but rejoice in the change. The interior of the Chapel is neatly fitted has sittings for about one hundred persons. The Bishop was received at the entrance, by the minister, and some of the inhabitants; and a written request, signed by them, praying that his Lordship would consecrate the building and adjacent burying-ground, having been read, he entered and proceeded to the Communion Table;—he, then, accompanied by the attendant clergy, walked in procession down the aisle, reading portions of Holy Writ suitable to the occasion. After the offering of a dedicatory prayer, the decree of Consecration was read by the Bishop's Secretary, Mr. Foster, to which his Lordship duly affixed his signature and seal. The usual morning service was then proceeded with,—at the conclusion of which the Bishop preached a most eloquent and masterly discourse, from Rom. v. 18. His Excellency the Lieutenant-Governor, with part of his family, were present. A numerous congregation filled the sacred edifice. A collection in aid of the church funds was made at the close of the service, and amounted to £10 3s. 4d, The burial ground was afterwards consecrated. The Rev. Mr. Palmer, Rural Dean; and the Rev. Mr. Cox, Minister of Goulbourne Street Episcopal Chapel, assisted in the Consecration. The Rev. W. W. F. Murray read the morning service.

The Archdeacon of Hobarton has presented to the Chapel a very handsome bible; some friends at New Norfolk, a neat stone font; others at Richmond, a reading-desk and seats; and the seraphine belonging to St. Matthew’s Church, Rokeby, was kindly allowed to be removed to "Kangaroo Point for the occasion.


St Mark’s served the Bellerive Anglican community for over 50 years until 1904 when a new church, also dedicated to St Mark, replaced it. The old church was then used as a Sunday school as well as for other community uses. In 1932 it was restored and was used intermittently by the girl guides and boy scouts. During the Second World War it was used by the Red Cross. After the war it again used by the local scout group who continue to occupy and maintain the building. The church has a small cemetery with almost 2 dozen surviving headstones.
* All colour photographs used in this article are my own. 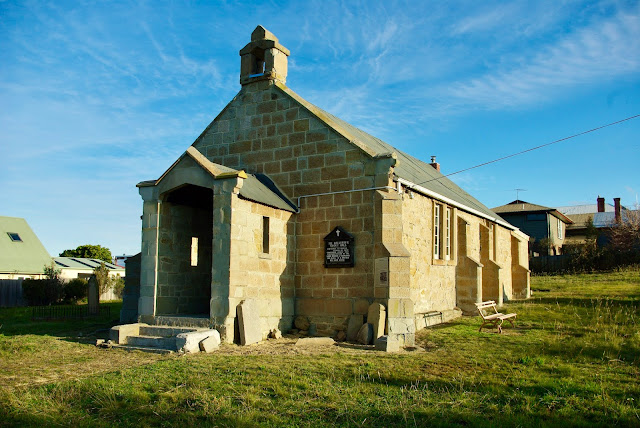 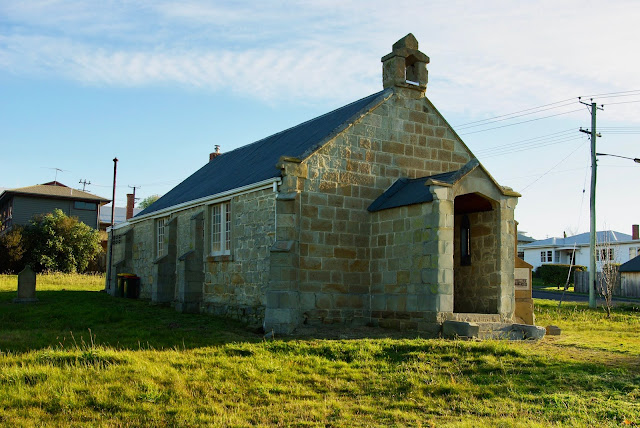 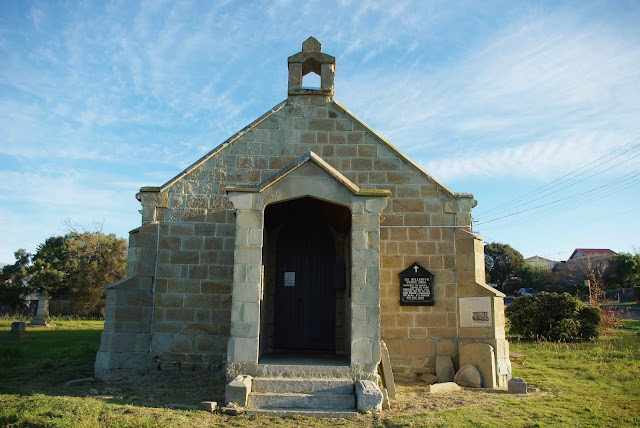 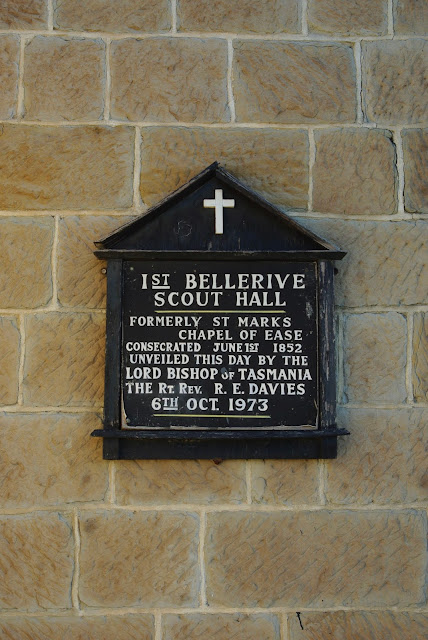 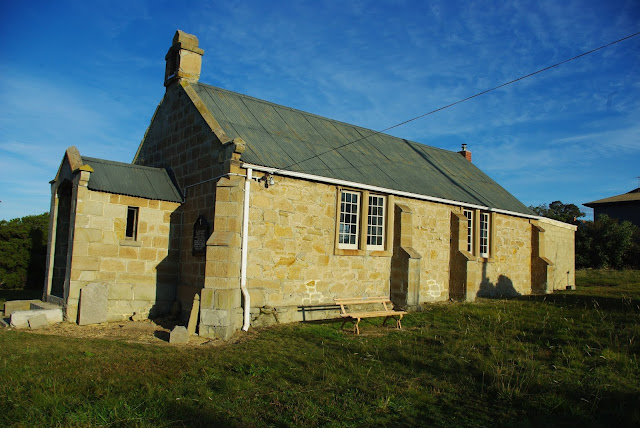 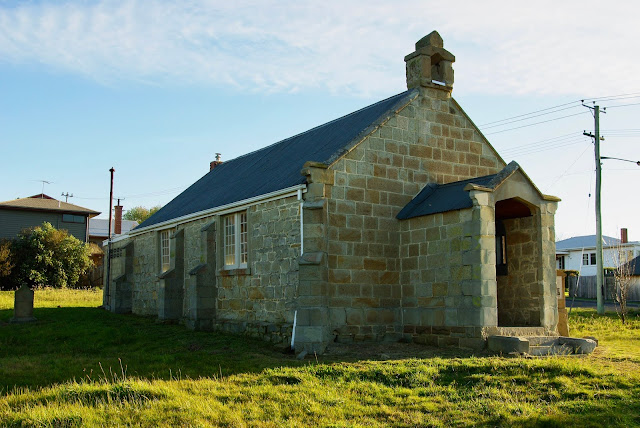 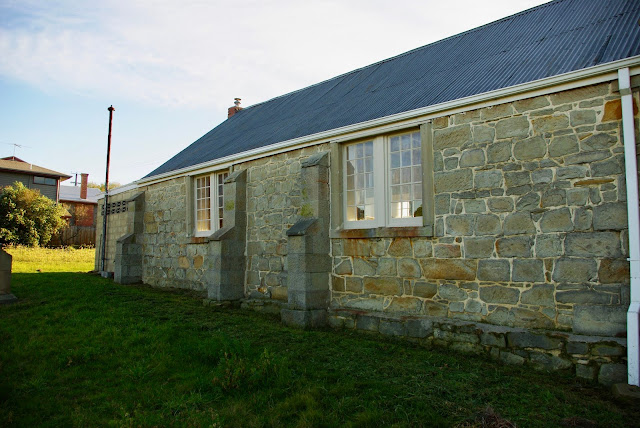 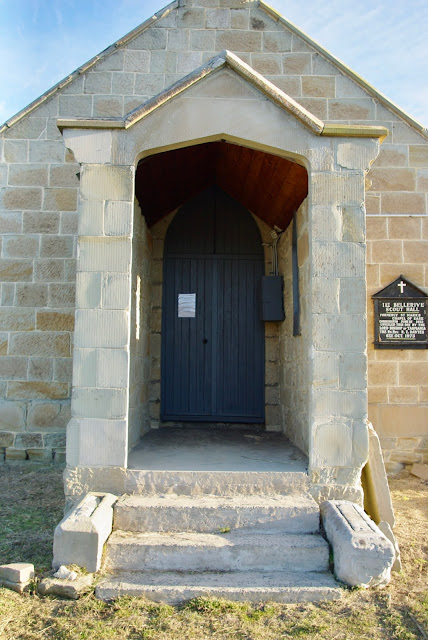 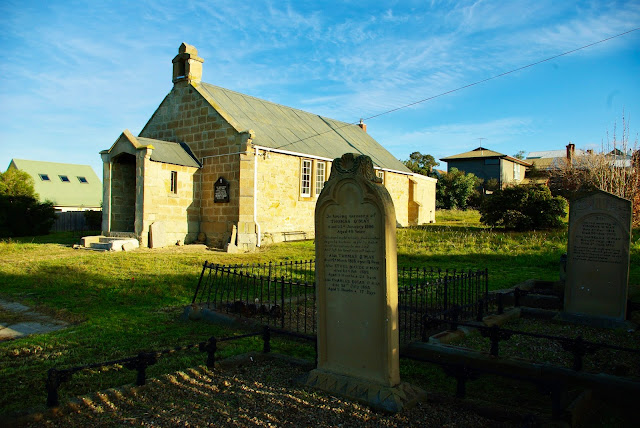 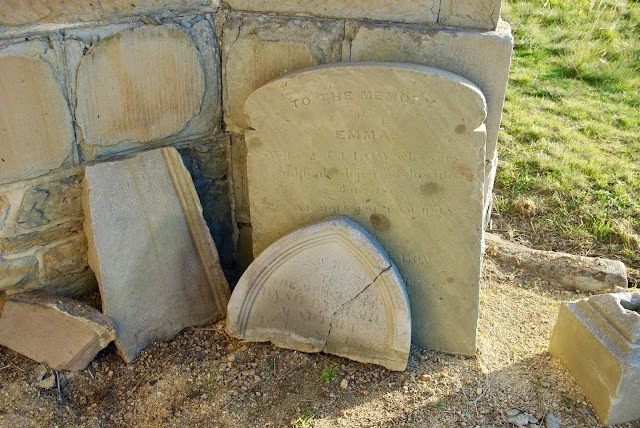 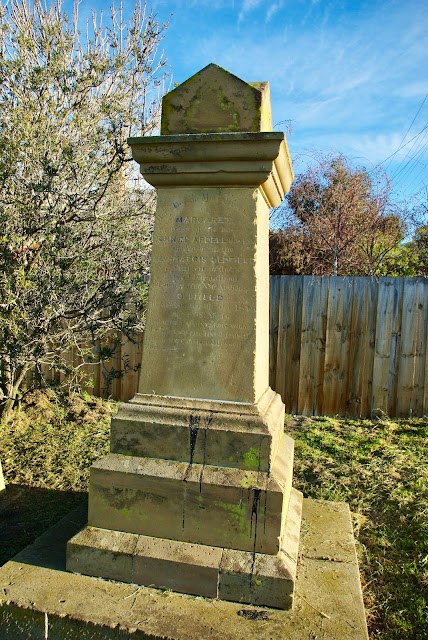 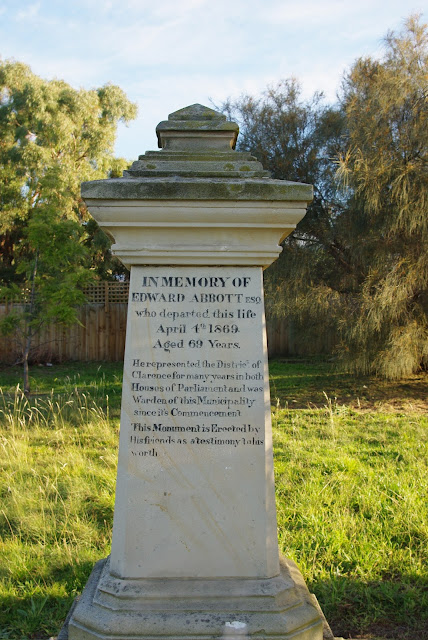 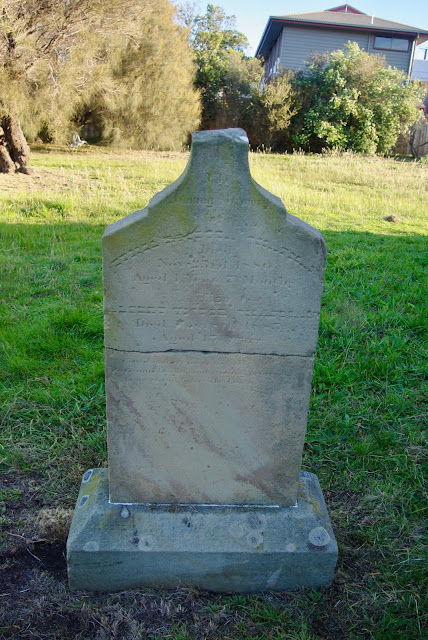 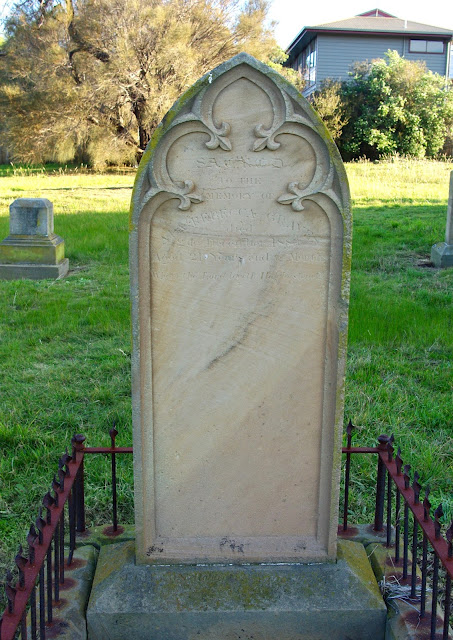 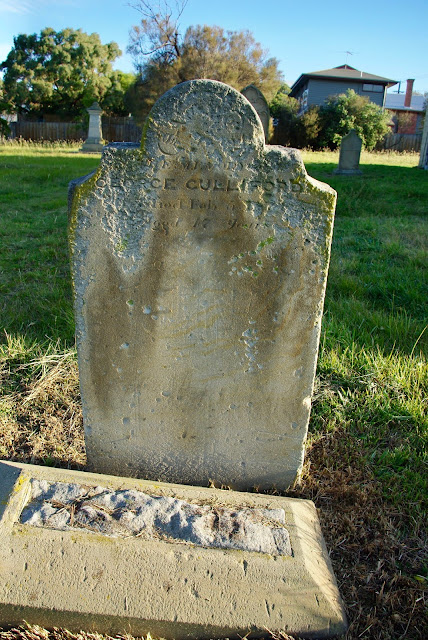 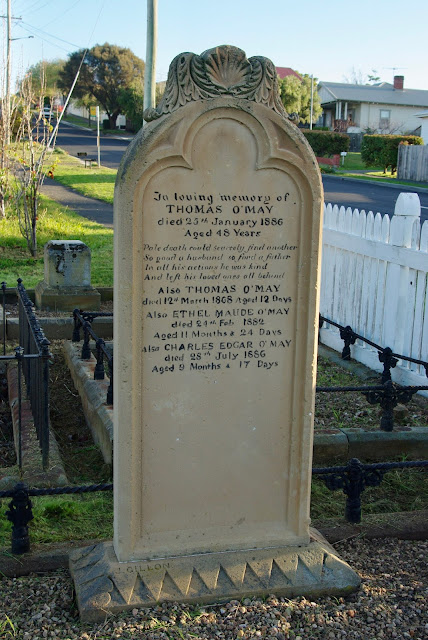 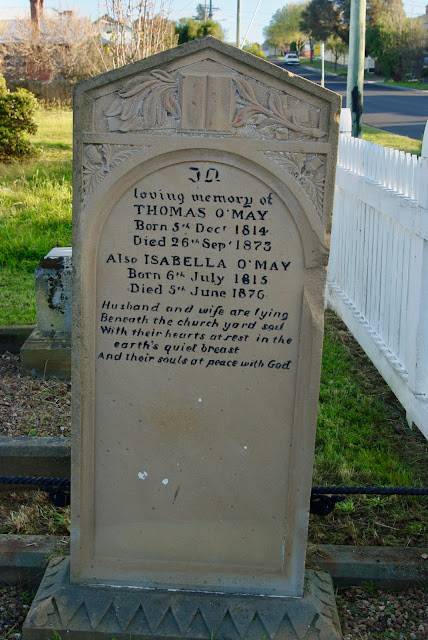 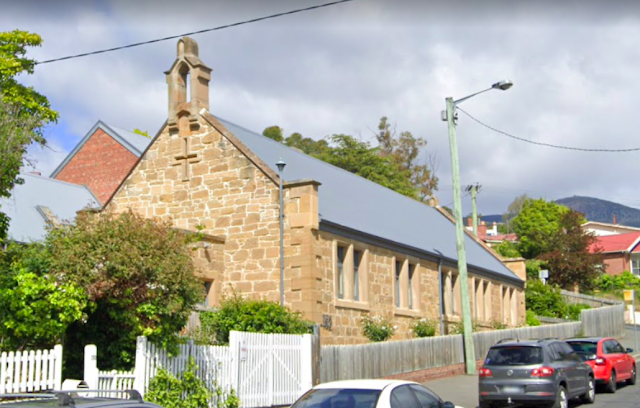 The church of St John the Baptist (1845) West Hobart, the design of which was supposedly
used for St Mark's at Bellerive. 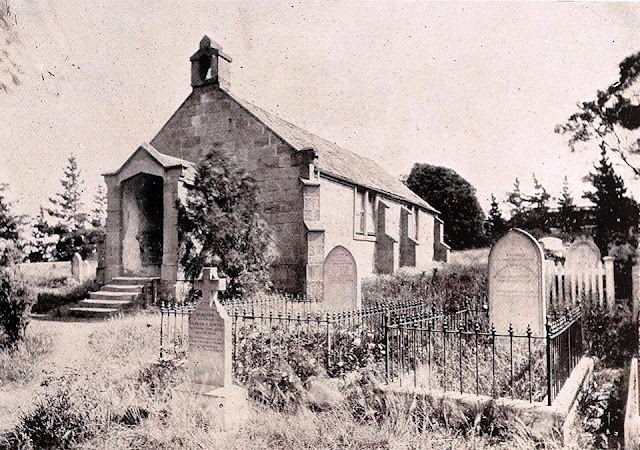 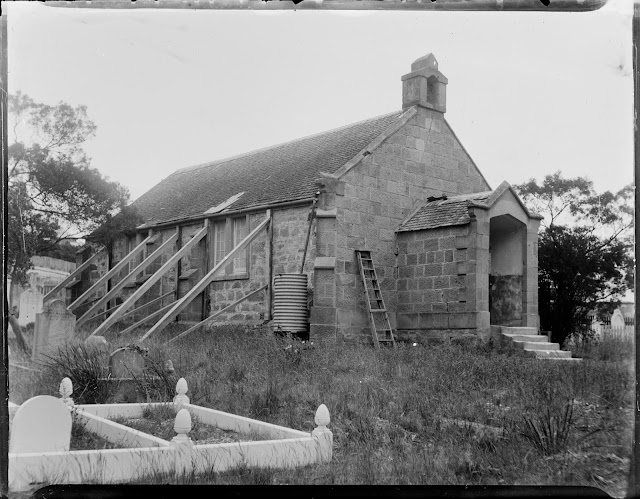