- August 24, 2020
Gray is a hamlet situated about 6 kilometres south east of the town of St Marys in the Break O’ Day local government area. Two churches were built at Gray; an Anglican church, St Barnabas, established in 1904, and a Methodist church, which opened in 1899.

In 1903, a visitor to the St Marys passing through Gray commented on the progress made in the district, including the recently opened Methodist church:

“On going out to the Gray Settlement I was surprised to see the improvements that have been effected. The country has been opened up, so that while travelling along the main road one can see the little holdings and the homesteads, some on the hills, the others in the valleys. Passing along this road, one catches a fine view of the East Coast…. A good deal of this country is limestone formation, and splendid for grass. A few of the farmers are building new homes, and others are contemplating doing so, as I could see the timber stacked for that purpose….A new Wesleyan church has been built, also a new state school, which is under the management of Mr. Smith. Travelling along, I could not, help noticing the bright looking boys and girls as they were leaving school for home, as happy as little princes. One thing that struck me particularly was their good behaviour. As soon as they saw a stranger the girls would bow, and the boys raise their hats. You don't see that in all parts of the state. I think great credit is due to Mr. Smith, the teacher, for instilling such excellent behaviour into his scholars”.

The Methodist church at Gray was situated at a locality known as “The Island Road” which was “about two miles from St Mary’s in an E.S.E direction”. In 1898 terrible bushfires had ravaged the settlement. The Hobart Mercury reported:

“Very grave doubts are entertained for the safety of some of the residents on the Island-road, it being impossible to reach them owing to the intense heat and dangers of falling trees”.

Fortunately, the community along Island Road survived the bushfires relatively unscathed. In the following year the Launceston Examiner described the opening of a new Wesleyan Methodist church at “The Island”:

“The Wesleyan Methodist Church in this district is to be congratulated upon the erection of a new church at Island. On Sunday, September 10, the new building was formally opened by a service conducted by the Rev. G. T. Heyward, of Newnham, who preached an eloquent and impressive sermon…. On Wednesday the opening celebrations were continued with enthusiastic success. At 3.30 a special sermon to young people was preached by Rev. G. T. Heyward, after which tea was partaken of by a large, number of visitors and residents. The tea was generously provided by the ladies of Island congregation, and their friends. A public meeting was held in the evening. Mr. S. Ditcham presided, and addresses were delivered by Revs. C. Lancaster (chairman of district), G. T. Heyward, S. J. Sullings, and Messrs. C. Rawlings and Forward.

A choir from St. Mary's Wesleyan Church was in attendance on each occasion, and rendered efficient aid, contributing in no small degree to the pleasure of all. The congregations throughout the opening celebrations crowded the church, many persons being unable to find even standing room. Gathering from the report furnished by Rev. S. J. Sullings, the building, which is an ornate structure, well finished within and without, is 25ft. by 17ft., and stands on an ideal site, the gift of Mr. Otto Smith. The actual cost of the church, which was considerably reduced by free labour, is £124 2s 3d. Local effort, assisted by generous donations from the members of the church outside the circuit and the gifts of friends who sympathised with the movement, more than met the cost of erection. The thanks of the church were given by Rev. S. J. Sullings to all who had rendered assistance in clearing land and carting materials, and gifts of a pulpit, Bible, hymn book, and lamps were thank fully acknowledged. The Rev. S. J. Sullings is to be complimented on the unqualified success of his endeavour to erect this church, and the residents of Island congratulate themselves on the possession of a splendid building upon which is no debt”. 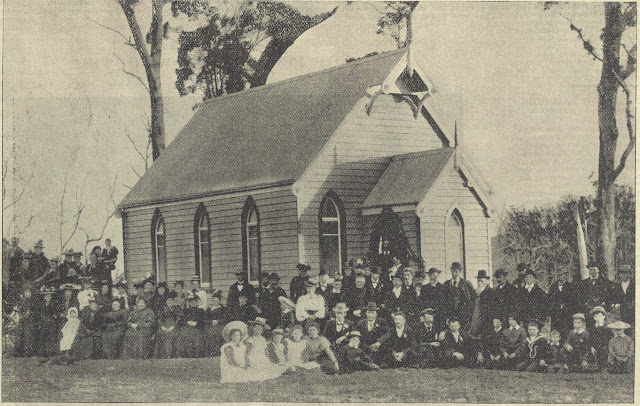