- September 01, 2020
South Arm is a small town located on an irregularly shaped peninsula from which the settlement takes its name. The Derwent River forms the western boundary, and Storm Bay the southern. Ralphs Bay forms most of the northern boundary. St Barnabas’ is the only church built at South Arm and it is currently in the process of being sold by the Anglican church.

In February 1892 a building committee was formed to establish a church at South Arm. The church was completed and dedicated in July of the same year. On Saturday 8 April in the following year St Barnabas was consecrated. St Barnabas is built on the site of a pre-existing cemetery. Prior to the church being built, Anglican services were held in a local schoolroom.

The consecration of St Barnabas is recorded in a delightful and detailed article published in the Tasmanian News. Most of the article is reproduced here as it is a rich source of information of the church’s establishment.

“An interesting and pleasing ceremony took place at South Arm on Saturday afternoon in the consecration of the recently erected Anglican Church there. The building is prettily situated on a plot of ground a short distance from the shore in a direct line, but upwards of a mile from the jetty. This plot of land has been in use as a burial ground for some years, and has awaited the erection of a suitable edifice in which the proper worship of God might be held. Hitherto services have been conducted in the State Schoolroom, but the new structure will be in every way more suitable, and is commodious enough to accommodate all the residents likely to be on the Arm for some years to come.

It is built of timber lined with tongue and grooved pine nicely varnished. It consists of nave, chancel, vestry, and porch. The nave is 30ft x 21ft, and the chancel 16ft x 9ft. It is well lighted and ventilated, and the seating accommodation is very good. The tasteful vestings for the altar, antependium for reading desk, lectern, etc., were made and beautifully embroidered by the Hobart Gentlewomen’s Needlework Guild, of which Miss Mault is Bon. Secretary.

The project of the erection was begun and successfully completed by an energetic committee of ladies and gentlemen, Miss Lily Calvert and M r H. R. Alomes acting as joint secretaries. The whole of the residents generously helped, especially Messrs W. and E. Calvert, who lent £50 free of interest to pay off the sum which was owing at the time of completion. This has since been nearly all repaid, and yesterday the church was practically out of debt. The building of the church was entrusted to Messrs W. Tibbs and Innes, who worked to plans gratuitously supplied by Mr B. Huckson. The pretty little stone font was supplied by Mr Watson, of Hobart. Over the chancel arch is the text "Worship the Lord in the beauty of Holiness,” and over the three lights of the chancel window the words “Holy, Holy, Holy.”

The s.s Taranna had been chartered to convey Bishop Montgomery and others from town, and about 120 availed themselves of the opportunity of taking part in the ceremony. Besides the Bishop, the incumbent (Rev. Charles Rhodes Hall) was the only clergyman present. The congregation, however, was large, and filled the building. The beautiful Anglican “Order for the Consecration of a Church” was gone through with impressive heartiness. Mr A. McIntyre, organist, of St. Mary's, Bellerive, presided at the American organ with which the church is furnished, and the singing was lead by the choir of the Bellerive church.

Bishop Montgomery at the conclusion of the ceremony gave a short address in which he congratulated the residents of the district on the possession of such a place of worship, and its practical freedom from debt….After leaving the church, the congregation repaired to the newly-erected cricket pavilion, which is a really handsome building, and there partook of tea. Shortly after 6 pm. a start was made for town, which was reached about 8 p.m.

Under present arrangements only about 16 services can be held in the new church in the course of a year, as Mr Hall’s labours extend over such a large district”.

In 2018 St Barnabas was listed for sale but the future of the church seems to be secure as the Anglican Diocese has agreed, in principle, to sell the church, cemetery and the Gellibrand Hall to the South Arm Community and the buildings will be retained as a community church. A management committee has been formed to facilitate the purchase and handover of the church to the community by the end of 2020. A link to a website of the Save St Barnabas Working Group can be found below. Donations to save the church can be made through this page:

A full list of the original donors who contributed to the building of the church can be found here:
https://trove.nla.gov.au/newspaper/page/838750
* Unless indicated, all photographs used in this article are my own. 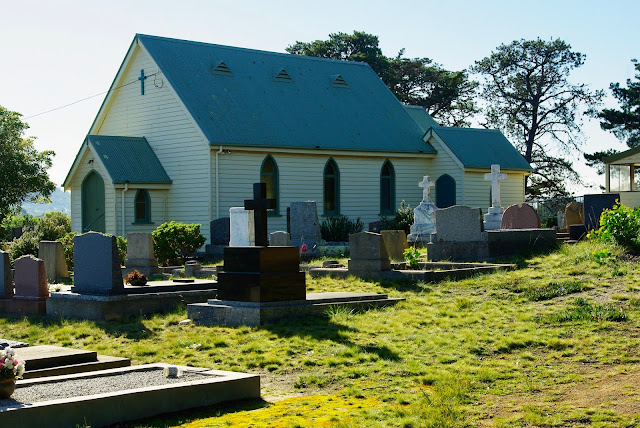 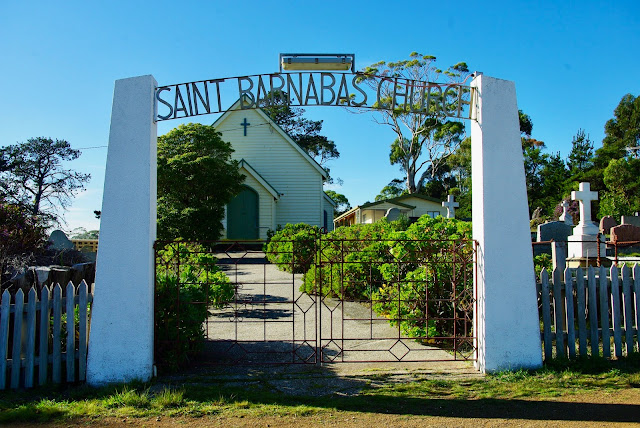 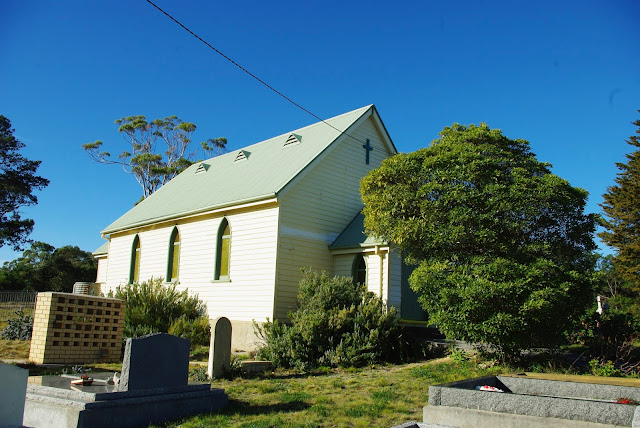 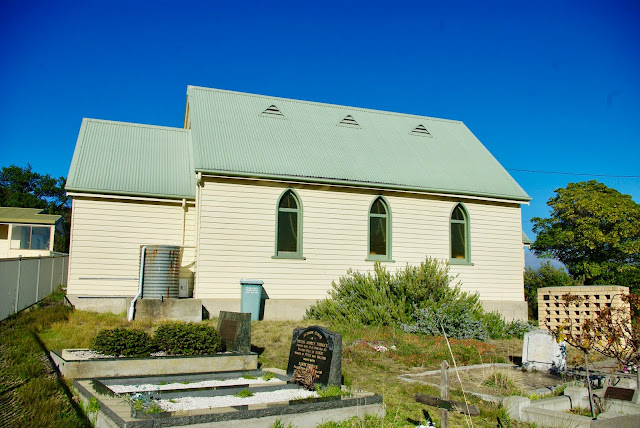 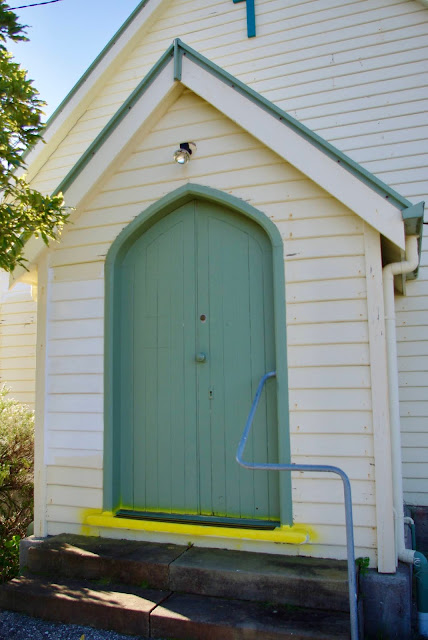 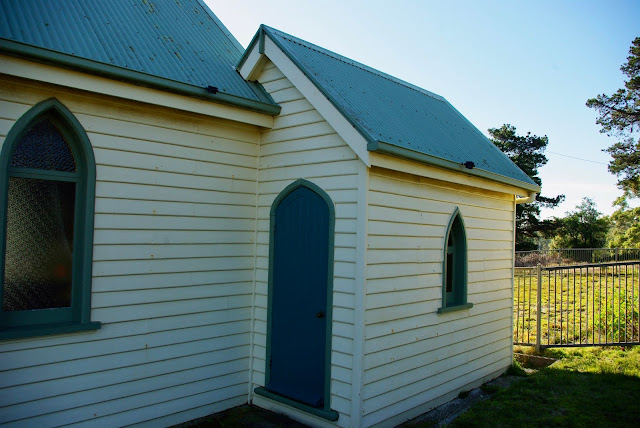 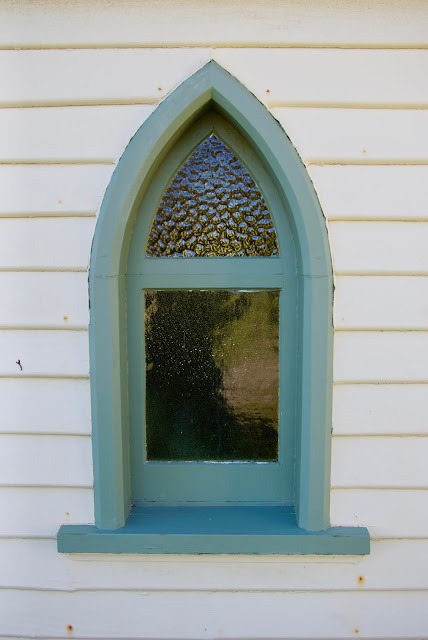 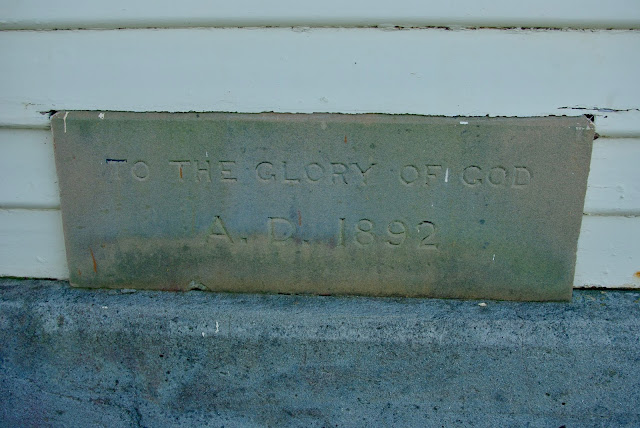 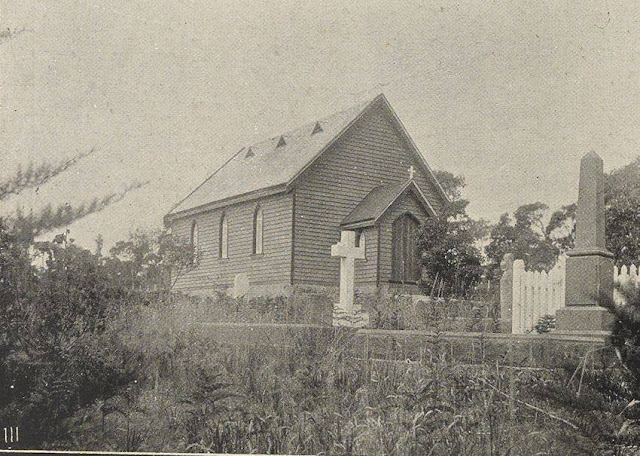 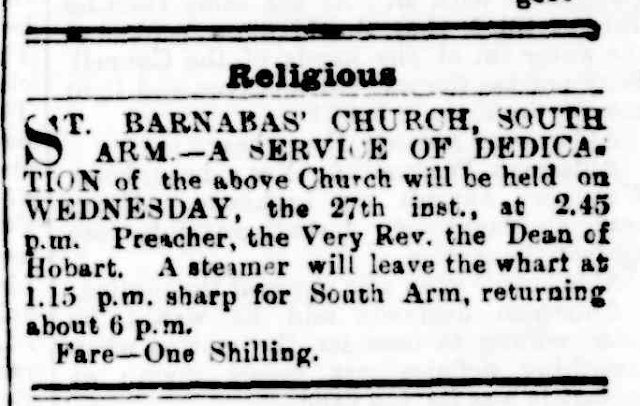 A few of the older headstones in the church cemetery: 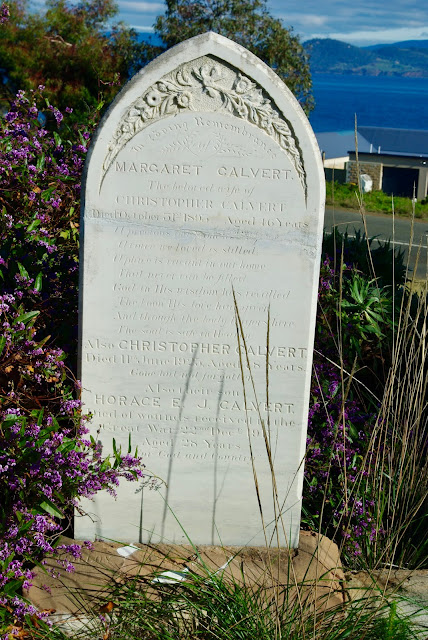 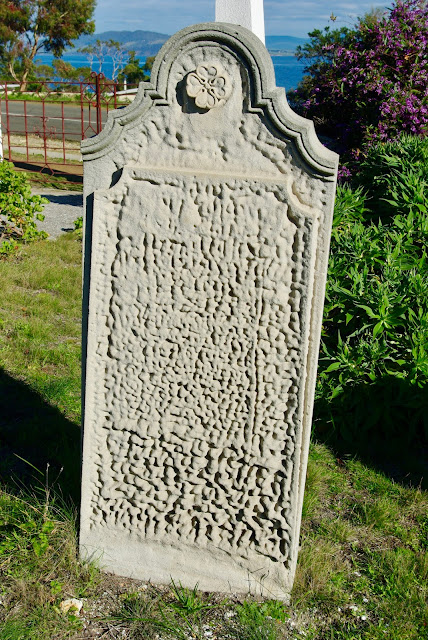 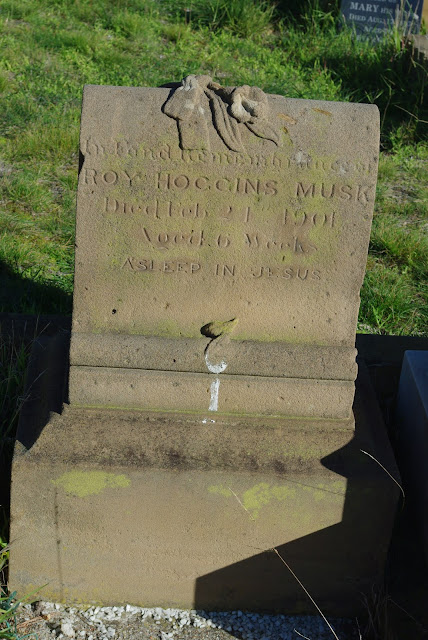 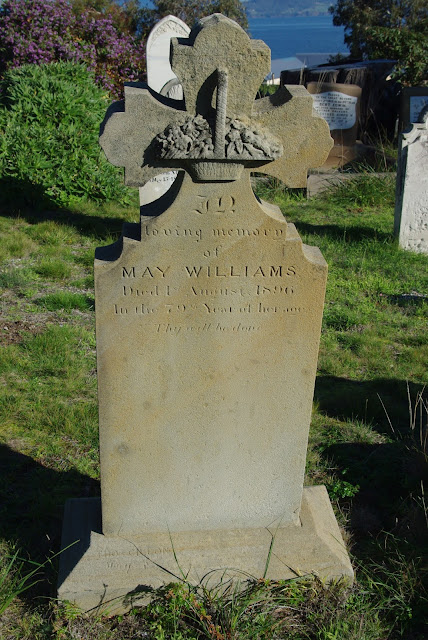 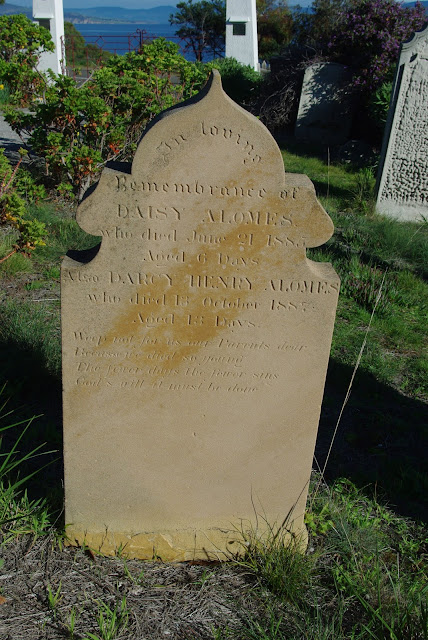 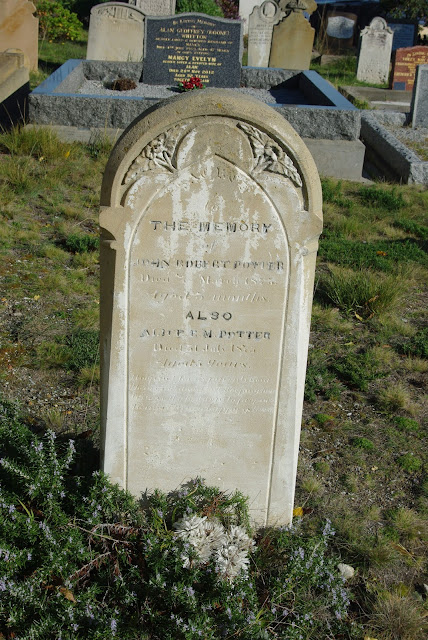 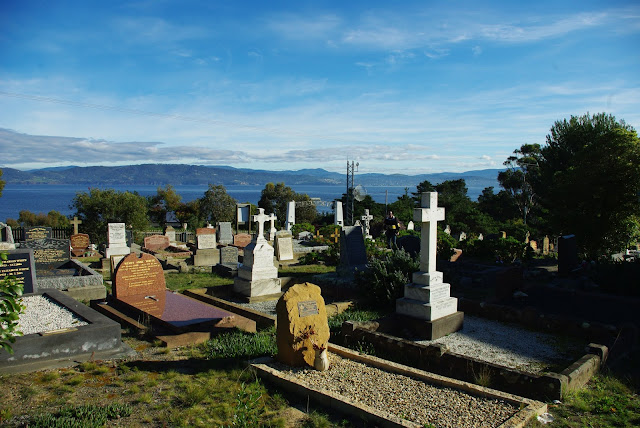 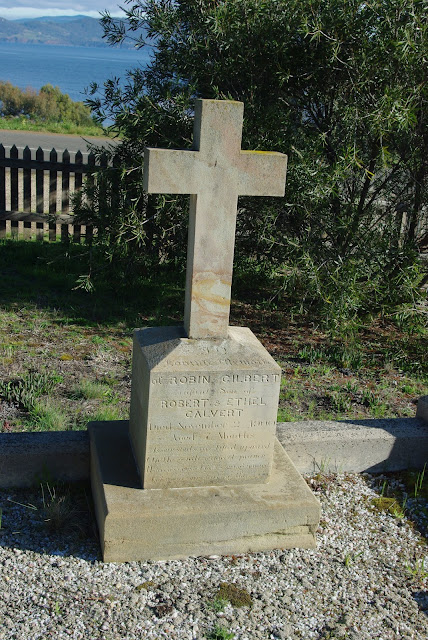