- September 15, 2020
Waratah is a former mining town located approximately 80 kilometres south of Burnie. Waratah was briefly the site of the largest tin mine in the world. The town had its beginnings in 1871 when James "Philosopher" Smith discovered tin at Mount Bischoff. The population of Waratah reached 2500 at its peak but is now under 300. The town was once connected to the Emu Bay Railway by a branch line which opened in 1885.

The first church established at Waratah was a Wesleyan Methodist Church that opened on Sunday 14 April 1878. This was a small weatherboard building “erected chiefly by the exertions of the Rev. J. May, Circular Head”.

The church’s opening is described in a report by the Hobart Mercury’s correspondent for Waratah:

“A very interesting ceremony was performed at Waratah, Mount Bischoff, on Sunday last, the 14th inst., which in no small degree illustrates the rapid rise and continued progress of a portion of the colony hardly heard of three years ago. The ceremony alluded to was that of opening the new Wesleyan Methodist Church, by the Rev. Robert Brown, of Latrobe, who held three services….The site of the chapel was the gift of Mr. James Smith, Westwood, river Forth, who kindly set it aside for the purpose intended. It is very pleasantly situated in a central position about 300 yards from the river Waratah, and was erected at a cost of £115, a large proportion of which was raised on the spot supplemented by handsome donations from two friends to the cause. The chapel will accommodate 120 persons, and it is to be hoped that the officiating clergyman may see it as well filled in the future, as it was upon last Sunday".

A further report in the Tasmanian noted that:

“The building, though small, is a very neat one, and no doubt suited to present requirements. It occupies a convenient site not far from the Stanhope Smelting Works…”.

In 1887 a correspondent for the Tasmanian News reported that the enlargement of the church was being considered:

“I am very pleased to note that the Wesleyan congregation contemplate the enlargement of the present church. The impetus given to this church in particular, by their late respected pastor, Rev. J. Jones, and the untiring energies of the well organised choir, is worthy of the highest encomiums…”.

Two years earlier, a different correspondent for the Tasmanian News complained about the “untiring energies” of Waratah’s Methodist ministers:

“The Wesleyan and Primitive Methodist ministers are very energetic young men, going about and visiting their people daily, and occasionally marching round a' la Salvation Army. I would like to say a few words respecting this marching round business. In my opinion it should be put a stop to. The way in which it is conducted at Waratah must to-all good Christians be a disgusting sight. The fact of a lot of men and women parading the streets singing hymns and shouting the name of the Almighty and of the Saviour, accompanied by a host of larrikins and little boys, bawling at the top of their voices, and making a mockery of the whole affair, is a sight not to be tolerated by decent people, and should meet, with the interference of the police….”.

The writer went on to comment on various religious denominations that had made an appearance in the town:

“Waratah people are essentially a religious people, … we have local preachers in galore. We have had the Salvation Army under the noisy conductorship of Happy Charley and Captain Jimmy Bray. We have had Quakers, and we have had the Disciples of Christ, or those who profess immersion as the true form of baptism. I am informed this body did not get many converts. Bischoff climate was rather against it…”.

It is unclear if the moves to enlarge the church ever took place as I have found no record of this in the newspaper record. By the turn of the century, with the Methodist Union of 1902, it was clear that the church was inadequate for the needs of Waratah’s Methodist population. In 1909 fundraising began to build a new church. A report in the Hobart Daily post noted that the old building was “very badly situated, and has long been an eyesore”.

The old church was eventually replaced in 1912. The story of this building will be told in follow-up article on Churches of Tasmania. The original church was sold after the opening of the new building. In 1937 it was reported that it was being used as a garage. What became of it after this is not known. 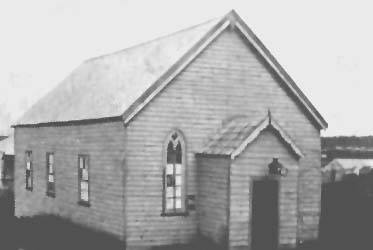