- September 17, 2020
Roland is a rural village on the Staverton Road approximately 10 kilometres south of Sheffield. It was the railhead of a line that branched off the Main Line at Railton. The name of the settlement changed several times. At the time of the Great War, it was known as Staverton Railway, then it changed to Dasher (after the nearby river) until 1919. After that it became Roland, in honour of Captain Rolland, an early explorer in the district.

In the summer of 1918, a year after the Rowland Gospel Hall had been built, a correspondent writing to the Weekly Times in Melbourne, described the settlement at Roland:

“At the Staverton railway terminus, which is about 1½ miles from here, there is a store, a blacksmith's shop, shoemaker's, church, post-office, and weighbridge. The station is rapidly growing. When it was first built it consisted only of the station houses and  buildings. The station is a very busy place now, as all the ore from the Round Hill mine, and produce from Wilmot and other districts are carted to the station”.

The story of the Christian Brethren Hall at Roland began in 1916. Alan Dyer writes in ‘God Was Their Rock”:

“The Kentish elders decided to obtain estimates for the erection of a Gospel Hall at what the local people in their sophistication, liked to call for a while, “the Terminus”…. The energetic J.T. King decided to erect the 35 ft. by 18 ft. building with the willing help of local believers”.

Land for the hall was donated by Mrs Lucy Byard, a widow whose husband had been killed by a falling tree. Only a single report exists describing the Gospel Hall’s opening which took place on Wednesday 11 April 1917:

“The Gospel Hall, which has been erected opposite Staverton railway station, was opened on Wednesday evening with a tea meeting. It was well filled, for besides residents, there were friends who had journeyed from distant parts to be present, some coming as far as from Barrington. It is a neat wooden structure with a brick chimney, and should be found very suitable for the purpose for which it has been built”.

The subsequent history of the hall is largely uneventful although the building was extended at a later time when the chimney was removed. The hall celebrated its centenary in 2017 and continues to serve the Christian Brethren community in the Kentish district. 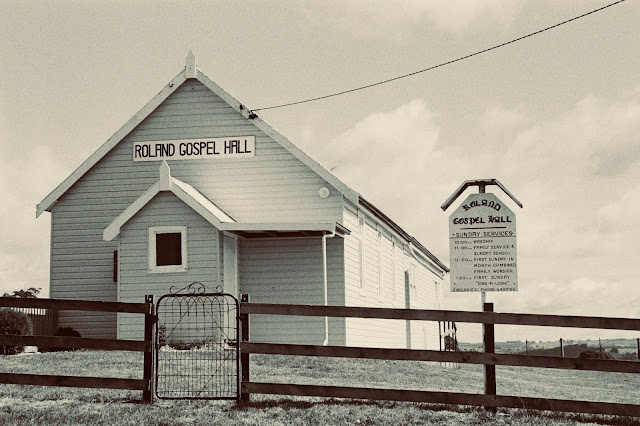