- September 19, 2020
Longford is an historical country town approximately 25 kilometres south of Launceston. The district around Longford was first known as the Norfolk Plains after the Norfolk Islanders who were resettled here in 1813. The town itself developed in 1827 and was originally called Latour. In 1833 it was renamed Longford, after the County Longford in Ireland.

The Longford Wesleyan movement began in 1834 under the guidance of Reverend John Manton of Launceston. The first meeting was held in ‘Lawrence’s barn’, on a farm adjoining ‘Northbury’. In 1837 a chapel opened in Wellington Street that was built on land donated by Joseph Heazlewood. A short report in the Launceston Advertiser provides a record of the occasion:

“On Tuesday last, the new Wesleyan Chapel at Longford was opened for public worship. The building is a very neat erection capable of accomodating 300 persons. A sermon was preached on the occassion by the Rev. Mr. Butters, Wesleyan Missionary, from Hobart Town…”.

The church was build on faulty foundations and this was to ultimately contribute to its demolition. Around 1856 a gallery was built in the church which was used by Sunday school scholars during services. By the 1870s the chapel had become unstable and the Methodist community decided that it was cheaper to build a new church rather than repair the old building. In July 1880 a new brick church in High Street (now the Uniting Church) opened. 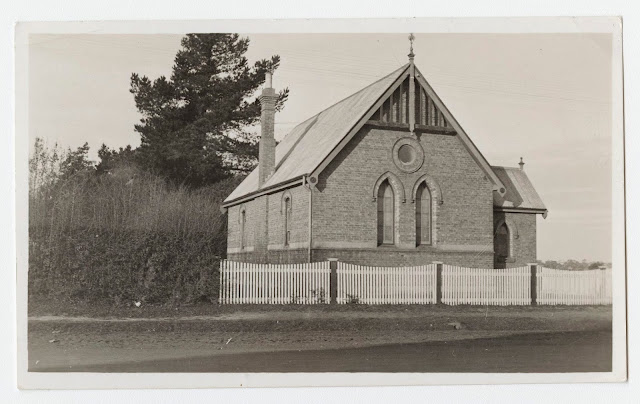 The Sunday School built on the site of the original Wesleyan Chapel on Wellington Street in
1902.  Source: Libraries Tasmania LPIC147-4-278 (undated)