- October 02, 2020
Forest is a small settlement off the Bass Highway about 12 kilometres south of Stanley in Tasmania’s far North West. The early settlers referred to the area as "the forest" and when an official name was needed it became "Forest".

St Bartholomew’s Anglican Church (1905) was preceded by a much earlier church established in the vicinity of Forest in the 1850s. Little is known about the ‘Forest Chapel’ which appears to have been a short-lived and simple building. It was built in 1857 and used until at least the 1870s. The precise location of the chapel is not known although it is very likely to have been situated next to a former Anglican cemetery on Ford’s Hill Road.

Anglican services were held at ‘The Forest’ from the early 1850s. In 1854, the Bishop of Tasmania, Francis Russell Nixon, visited Circular Head on an expedition through the Bass Strait aboard the government schooner “Beacon”. Nixon was a keen sketcher and painter and used his talent to record his travels. Nixon described his visit to Forest in November 1854 and sketched a building titled “Forest Chapel, Circular Head”. (see below)

In 1857 Nixon’s journal and drawings of the voyage was published as “The Cruise of the Beacon: A narrative of a visit to the islands in Bass's Straits”. In a journal entry for Sunday November 12th 1854, Nixon notes:

“Confirmed eight young females at Stanley in the morning. Took charge of the afternoon service, in order to allow Mr. Fookes to go to the Chapel in the Forest”.

It is likely that the ‘chapel’ Reverend Fookes visited was also used as a schoolroom. Two days after taking the service at St Paul’s at Stanley, Nixon visited Forest. While his journal describes the school, it makes no mention of a chapel:

“Soon after breakfast, Mr. Power and myself, with some others, started for the Forest, about twelve miles distant; Captain King was too much indisposed to accompany us. In the cart, which had been provided for his accommodation, were deposited Mr. Peebles (a surveyor), Miss Mills (governess at Mr. Ford's in the Forest), a young boy, and myself. Mr. Power and Mr. Fookes were on horseback;…. On our arrival at Mr. Ford's, our party separated. The surveyor-general rode on to inspect the Duck River. Mr. Fookes and myself determined to visit the Forest school. It was well for us that Miss Mills kindly offered herself as our guide; for the track through the bush was so tortuous and intricate, that, had we trusted to our own topographical skill, we should have wandered far and wide before reaching our destination…. This sequestered spot is considerably altered since my last visit. So many trees have been cut down, and so much underwood cleared away, that it no longer possesses the romantic character which had arrested my attention so strongly a year or two ago. I was abundantly repaid for my wet walk, by examining a more than commonly intelligent class of children. The part of their ordinary lesson book which was placed in my hands, for examination and questioning, happened to be upon volcanoes. They had been well taught, not merely to repeat, but to understand their lessons…”.

While the “chapel” is not described in the journal, it appears as an illustration in “The Cruise of the Beacon” published in 1857. This is problematic as newspaper records provide clear evidence of the Forest chapel only being built in 1857, three years after Nixon’s earlier visit. Thus, the drawing can only be that of an earlier chapel or of a school-cum-chapel described in his journal.

However, what is undisputed is that two churches were built at Circular Head in the mid-1850s. One was at Black River (also known as Blackwall and latter as Mawbanna) which opened in December 1856, and the second was at Forest, opening on Easter Sunday in 1857. In April 1857, Launceston’s Cornwall Chronicle records the erection of these two churches following the donation of land and receipt of funding from the Anglican sustentation fund:

“It is gratifying to record that both these buildings have been erected and opened for the celebrations of divine service, the one situated on the township of Blackwall, at the Black river, on Christmas Day last; the other on Easter Sunday, April 12th. Some time ago, two members of the Church of England acceded to the Chaplain's request to convey allotments of land to trustees, who might hold them for Church building sites, and places in which the dead might be interred . On these the edifices before mentioned have been built, partly from the contributions of the inhabitants in money and material, assisted by the donation from the Sustentation Fund…”.

In an article titled “Opening of St Peter’s Church in the Forest”, the Cornwall Chronicle briefly describes the church. Another description of the church’s opening is recorded in the Hobart newspaper, the Courier, which contains substantially more detail:

“Circular Head is so distant from the seat of Government, and has been hitherto deemed a place of so little importance, that it is very seldom that we hear or see anything respecting it….However, it would appear that the Forest people are not unmindful of their spiritual interests, notwithstanding the depression of the ‘times,' and the difficulties incident to a bushman's life. Of this we can give proof, when we state that some time ago Messrs. Ford and White, at the request of the chaplain of the district, conveyed to trustees portions of their farms, to be held perpetually as the property of the Church of England. On both of these allotments places of worship have  been erected, and opened for Divine service within the last few months”.

“Easter day was the appropriate time chosen for the first Christian congregation in the Church just finished on Mr. Ford's hill. Accordingly, the people round about assembled in goodly numbers to thank the Giver of all Good for the inestimable benefit of having placed within their reach a good substantial building set apart for the worship of the Most High”.

“The services were performed by the minister of the parish, who delivered a discourse suitable to the occasion from 1 Cor., xv., 1,2, 3. 4, after which an Offertory was made on behalf of the funds, concluding with the administration of the Sacrament of the Lord’s Supper. The 1st Easter Hymn and the 10th Psalm were efficiently sung by the choir newly-formed in connection with the Church, assisted by the congregation at large. A Sunday School is in operation, which gives fair and reasonable promise of support and success. We may mention that the building is 25 feet by 12, with diamond-paned windows, and one of stained glass at the eastern end. A well-toned bell stands over the western entrance, surmounted by a turret. It is more than satisfactory to know that both of the Churches in these forests are entirely free from debt. A few needful requisites are still wanting, viz. - a font for each, service books, and the means whereby substantial fences may be erected to make the allotments proper receptacles for the dead….Contributions to this end will be received by the Rev. S. B. Fookes, Stanley Parsonage, by whom they will be thankfully acknowledged”.

The Courier’s description of the church does not entirely match Nixon’s drawing, however, its reference to “allotments” as “receptacles for the dead” provides a clue which links it to the Ford’s Hill Road Anglican cemetery.

Unfortunately there are few further references to the church, which was presumably known as St Peter’s. The last reference I have found to it is from an article published in the Cornwall Advertiser in May 1872. This states:

“The Harmonic Society, assisted by other ladies and gentlemen, gave an entertainment in the Stanley Reading Room in aid of the fund for the repair of the English Church, in the Forest, Circular Head…”.

When St Bartholomew’s Anglican Church was built at Forest (1904-05) newspaper reports make no mention of an earlier church. This may indicate that “St Peter’s” had long been abandoned. Dorothea Henslowe, writing in “Our Heritage of Anglican Churches” states that “At one time Forest shared the Black River (Mawbanna) church” which supports the idea that the old Forest Chapel had been abandoned by the 1870s. What is clear however, is that the historical record reveals that churches existed at both Forest and Mawbanna in the 1850s.

Hopefully the publication of this article will lead to the unearthing of further evidence about the early church at Forest. Future articles on ‘Churches of Tasmania’ will explore this history of the second Anglican church at Forest (St Bartholomew’s) as well as the churches at Mengha/South Forest and Mawbanna. 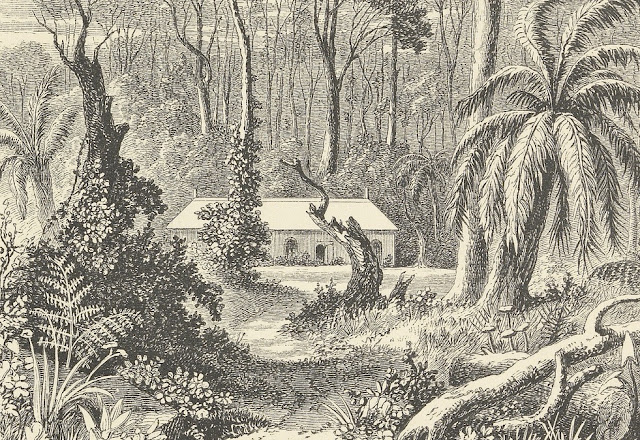 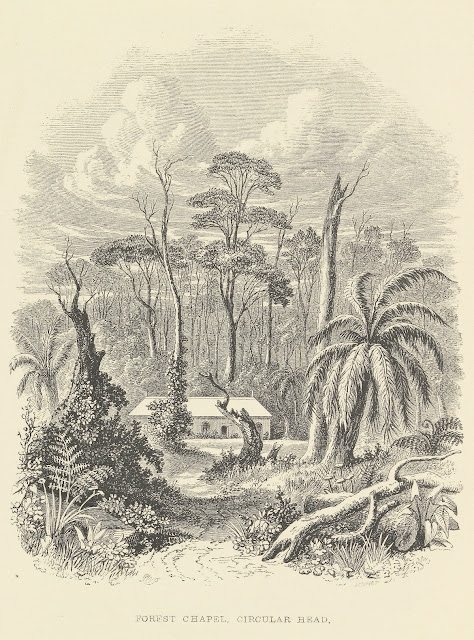 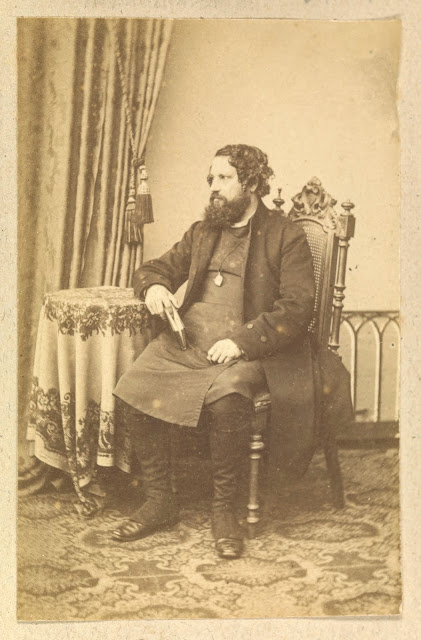 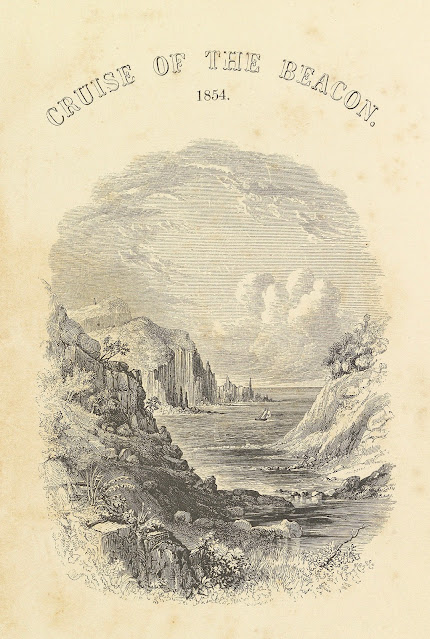 The frontispiece of Nixon's illustrated Journal published in 1857