- October 05, 2020
Evandale is an historic town situated approximately 20 kilometres from Launceston. Originally established as a military post in 1811, the general area was variously known as Collins Hill, Patersons Plains and Morven. The settlement’s name was changed to Evandale in 1836 in honour of Tasmania's first Surveyor-General, G.W. Evans.

The first Wesleyan Methodist Church at Evandale opened in 1836. It was a small brick chapel which still stands on Russell Street. When the building was outgrown the Methodist’s used the Evandale Council Chambers for Sunday school classes and other purposes. However it was not until the 1880s that an opportunity to acquire a new church unexpectedly presented itself.

In 1883 a Mission Hall with a “capacity to seat between 150 and 200 people” was built on Macquarie Street. The Mission was established by ‘evangelists’ who secured the financial backing of Mrs Margaret Reed, widow of Henry Reed, founder of the Wellington Street Christian Mission in Launceston.

The Evandale Mission was to last for less than two years. The reasons for its failure has been described in a previous article on ‘Churches of Tasmania’. [see No. 715] Mrs Reed, who owned the building, sought to dispose of it following the Mission’s collapse. It was offered to the Methodists for a mere £300, which was an opportunity that they could not let pass.

The opening of the church took place on Sunday 1 March 1885 which was followed by a spectacular fund raising ‘tea meeting’ on Tuesday 3 March. The Hobart Mercury provides a somewhat entertaining review of the tea meeting:

“The public tea in connection with the opening of the new Wesleyan Church here came off on the 3rd inst. in the show buildings. Tho place was decorated with flags, flowers, etc., and the tea was laid out in the front wing of the building. At about 5 o'clock the brass band, …of Longford, started from Mr. Porter's, and came to tho buildings playing a lively tune. The fife and drum band also soon put in an appearance, under the leadership of Mr. Hodkinson. After the bands had played several tunes, a rush was made for the tea tables, and when, about 200 had been seated the fife and drum band played several more tunes in the other end of the building….”.

“The Rev. J. Russell, Presbyterian minister, being the first speaker, said that he would tell the Wesleyans, or at least those of them that did not want the church to prosper, what they should do. In the first place, if two service were held, only attend one of them, and then come late; then find fault with the choir, and then the preacher. If it be a lady, make as much noise coming in as possible to interrupt the whole congregation; also to take a sleep during the sermon, and when asked for a donation give a threepenny bit, and grumble about what it takes to keep the church, and last of all, tell everyone that the church is going to the dogs, and that you intend to clear out of it altogether…”.

“The Rev. H. Baker gave some of the reasons people have for not attending the Lord's sanctuaries, which caused a great deal of laughter. He ably defended the charges laid against ministers of all denominations, and said if the people only came to worship God, much more good would be done. He also gave a statement of how the building had been purchased of Mr. Reid for £300, for which some property now rented by Mr. Drake would be sold, and the remainder made up by subscription…”.

“The church was filled to the doors, and some little trouble was caused by some of the lamps going out. Perhaps the defects will be remedied before they are lit again. The choir, under the leadership of Mr. W. Bond, rendered several hymns during the evening…”.

With the opening of the new church, the old Russel Street Chapel was used for Sunday school classes. In May 1885 the Mercury reported:

“The old church (now occupied as a schoolroom only) is to be offered to various friendly societies at a very low rental per night, to hold their meetings in. I refer to the Oddfellows, M.U., St Andrew’s Benefit Society, and the Good Templars”.

In later years the Russell Street Chapel was later used as a Druid Hall, a Scout Hall and then by the Returned Services League of Australia (R.S.L.A.) as their Evandale Club Room. In 1975 it was offered for sale and in 2000 it was converted for use as heritage accommodation for which it is still used.

The new church on Macquarie street had a challenging history. Initially it was under the charge of the Launceston Methodist Circuit before becoming a Home Mission Station in 1916. The church closed in the mid 1940s then reopened in 1954. This was not to last services and ceased in the 1960s.

The church no longer exists and its fate is not known although it is likely that it was demolished in the early 1990s. 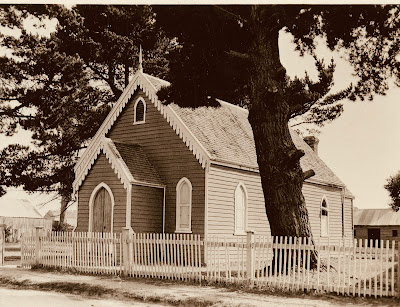 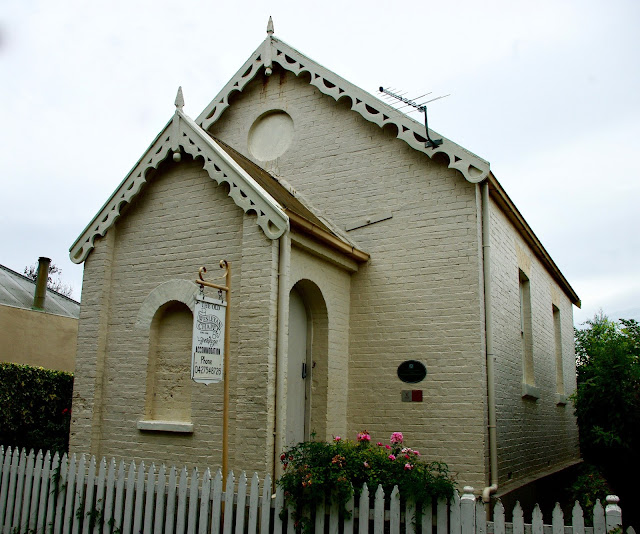 The original Wesleyan-Methodist Chapel on Russell Street. (my photo 2018) 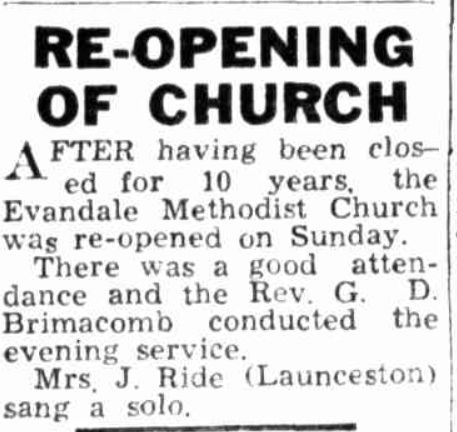 Report of the churches reopening in 1954 (The Examiner)