- October 08, 2020
Leprena is a former settlement on the northern end of the Recherche Bay. The word 'Leprena' is of Tasmanian Aboriginal origin and means 'home'. From the late 19th century up until the 1940s Leprena had an active timber-milling industry. The settlement’s population peaked around the turn of the 20th century by which time Leprena had acquired a school, a public hall, post office, general store and a church. The saw mill's closure in 1938 and destructive bush fires in the following year brought an end to the settlement.

There is little information about Leprena’s Congregational church which opened in July 1899. A brief article describing the church’s opening appears the Hobart Mercury. It was an unusual event given the absence of the minister, Reverend Joseph Ebery, who sent his apologies. In lieu of a formal religious ceremony, the occasion was marked by an informal celebration. The Mercury’s correspondent at Leprena reported:

“A concert and coffee soiree was held in the local church on Tuesday night, 18th inst., as an opening of the church. The church was crowded. Much thanks are due to Mr. F. Parker for his diligent labours in organising the church here. The Rev. Mr. Ebery was expected to be in attendance, but sent a telegram apologising for his absence through being indisposed. Mr. W. McDougall filled the position of chairman in a satisfactory manner”.

“After the opening hymn "Onward Christian Soldiers," prayer by Mr. F. Parker, and an address from the chairman, a concert was given by the following friends: Mrs. Parker, Misses C. Parker and L. McDougall, Messrs. McDougall, Parker, J. Pratt, D. Campbell, Evans, Harris, Master H. Parker, the church choir, and scholars of the Sunday-schools. Mr. Robertson narrated the history of Leprena church work, which was received with great applause. Mr. D. Campbell proposed a hearty vote of thanks to the chairman, seconded by Mr. F. Parker. The benediction was then given, and a very enjoyable and pleasant evening was closed with “God Save the Queen.”

No description or photograph of the building exist but it is likely to have been a small weather board structure and probably did not resemble a church in the traditional sense. Given the remoteness of Leprena, newspaper reports about the church’s activities are almost non-existent. There are a few references to the activities of the Leprena ‘Sabbath school’ and notices of services appear irregularly up until the 1920s. In 1922 a report in the Huon Times reveals that fortnightly services were still being held at Leprena and that “there were 15 pupils in the Sunday school under Mrs Johnson”.

The date of the Leprena Congregational church’s closure is not known but its fate is most likely linked to the the demise of the Mill. If the building was not removed before 1938 it would have been destroyed in the bushfires of the summer of 1939. 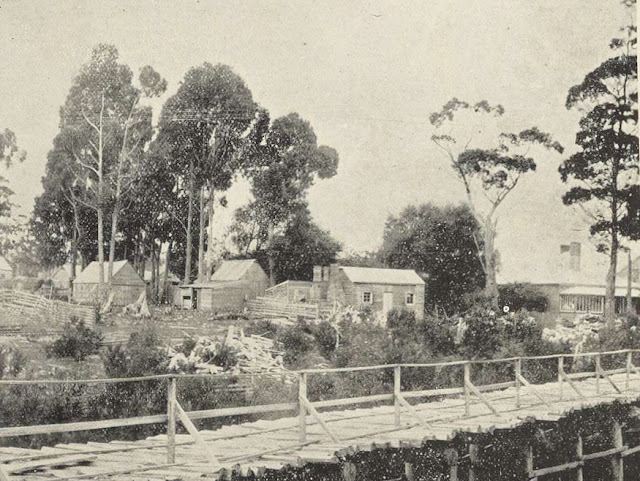 A partial view of the settlement at Leprena (1911). The saw mill manager's house is on the right, the
church would have been among the building on the left of the photograph. Source: Tasmanian Mail 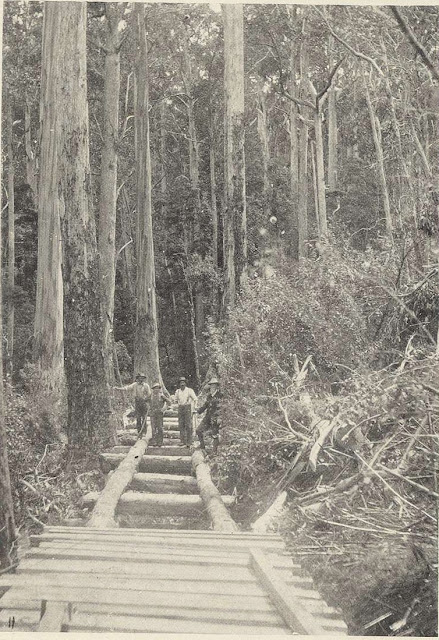 The wooden tramway at Leprena.  Source: The Tasmanian Mail 1911 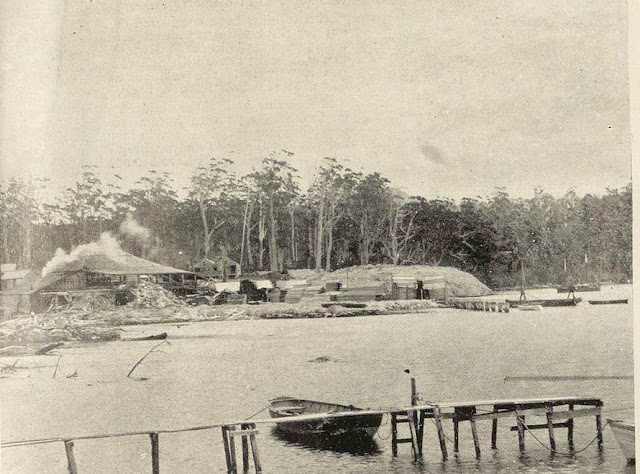 The Timber Mill at Leprena (1911) Source: The Tasmanian Mail