No. 800 - Bellerive - Corpus Christi Catholic Church - '35 Years in the Wildnerness'

- October 19, 2020
Bellerive is a suburb of the City of Clarence and part of the Greater Hobart area. It is located on the Eastern shore of the Derwent River. Originally it was named Kangaroo Point but in the 1830s this was changed to Bellerive, meaning ‘beautiful shore’.

Bellerive’s first Catholic church was established in 1936 as the Corpus Christi School. Worship was conducted at the school until such time that a church could be built. Almost 30 years were to pass before this dream was realised in 1965.

Before the opening of Corpus Christi School, Catholics at Bellerive were attached to St Joseph’s at Hobart and went by ferry to Mass in the city. In 1930 Bellerive became a part of Richmond Parish and Mass was celebrated every Sunday in the supper room of the Bellerive Town Hall. In 1934 Bellerive was made a separate parish and soon after work began on establishing a school and church for the community.

Construction of the school-church began in 1935 on a site in Church Street. The school was founded by the Presentation Sisters and was officially opened in January 1936. The Hobart Mercury published a short article describing the occasion:

“Corpus Christi School, Bellerive, the first Catholic building in the Clarence municipality, was solemnly blessed and opened yesterday by the Archbishop of Hobart (the Most Rev. Dr. W. Hayden in the presence of a large gathering, which included the Mother General (Sister Philomena), and Mother Superior (Sister Aquin), and other members of the Presentation Community who will conduct the school. …”

“The building is designed to serve as a school and church. The foundation stone was blessed by the Vicar-General, the Right Rev. Monsignor Thomas Monaghan, P.P., of Deloraine, on October 6 last. The work of building was begun in August, and ended in December. The architect is Mr. A. T. Johnston, of Hobart, and the builder is Mr. O. Cordwell, of Bellerive….”.

“Designed in bungalow style, the building ls about 112ft. long and 22ft wide, with an iron roof. It ls of brick with stone foundation. There are four model class rooms, each measuring 27ft. by 20ft., and in each can be accommodated from 40 to 50 children….The fittings throughout are of Tasmanian oak, and the pews for seating church congregation's are so made that they can be quickly transformed into desks for the school children….”.

In 1958 the school moved to its present site in Alma Street. Another seven years were to pass before a church was built alongside the school the new school.

Corpus Christi’s modern design is based on the shape of a tent or tabernacle used by the Jews during their 40 year wandering in the wilderness long before the construction of the first Temple in Jerusalem. The building is also believed to be inspired by the St Patrick’s College Chapel in Launceston which had been completed in 1959. Corpus Christi was designed by architects Cooper and Vincent.

Corpus Christi was opened and dedicated on 1 February 1965 by Archbishop Guilford Young. At the opening Bishop Young revealed that, “he was given the confidence to build Corpus Christi when a deputation from the parish called on him and pledged their support in presenting a petition to build the church”. They were, said the Bishop, “witnesses to courage, faith, hope and dynamism of the community”.

Bellerive parish, established 90 years ago, spent its first 35 years in the wilderness without a church, but it is fair to say that the magnificent building which replaced the old church-school, was well worth the wait.
* All photographs used in this article are my own. 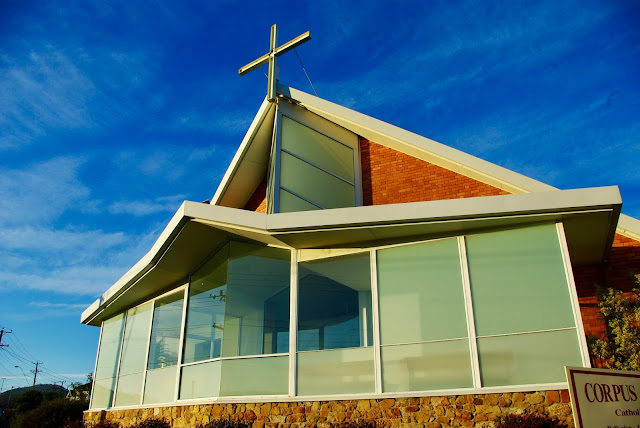 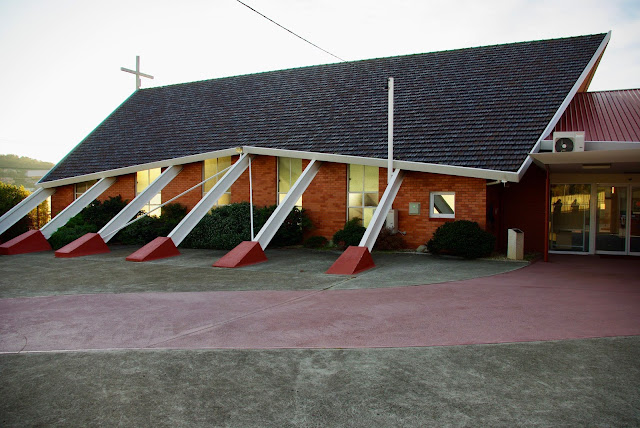 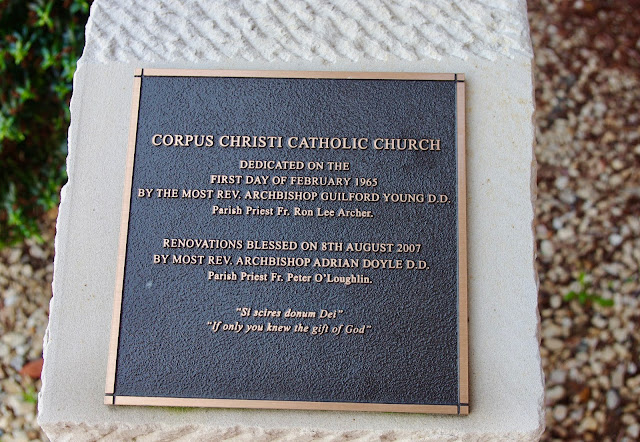 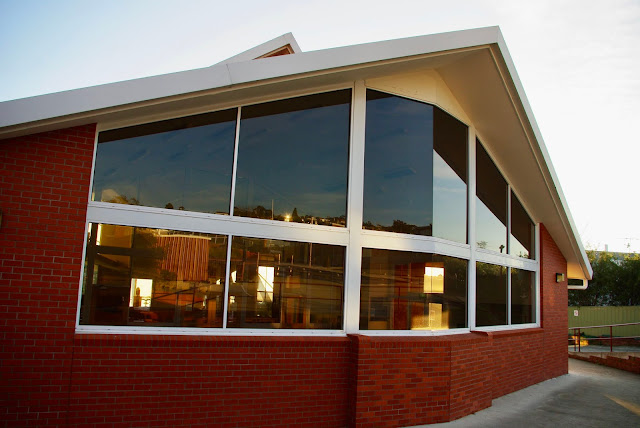 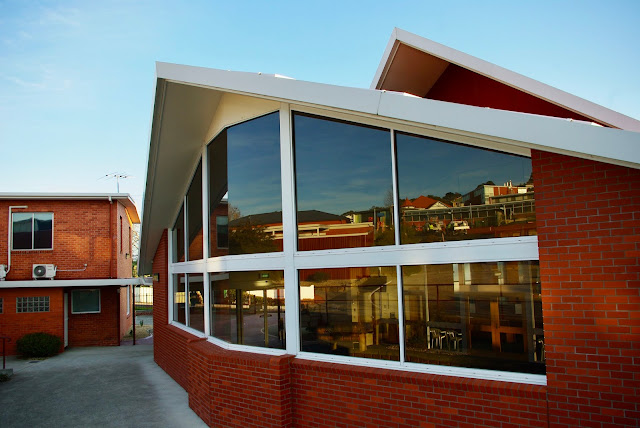 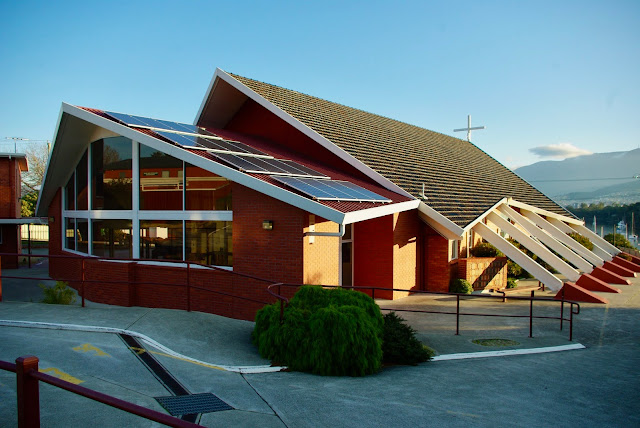 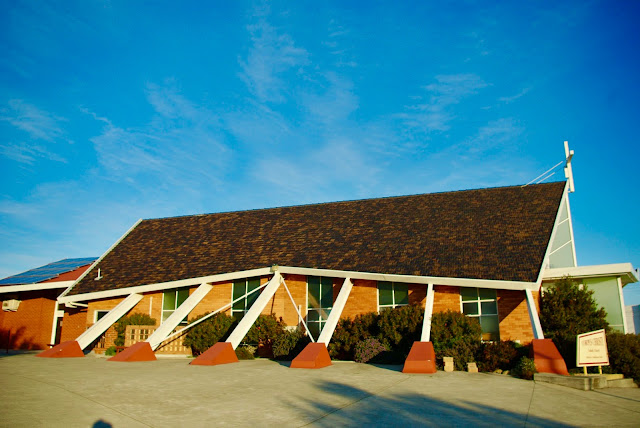 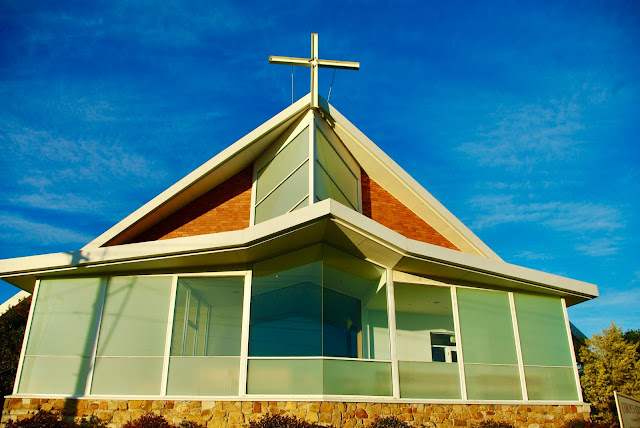 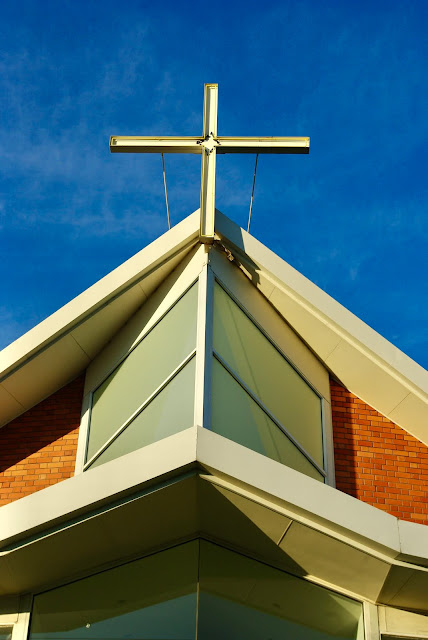 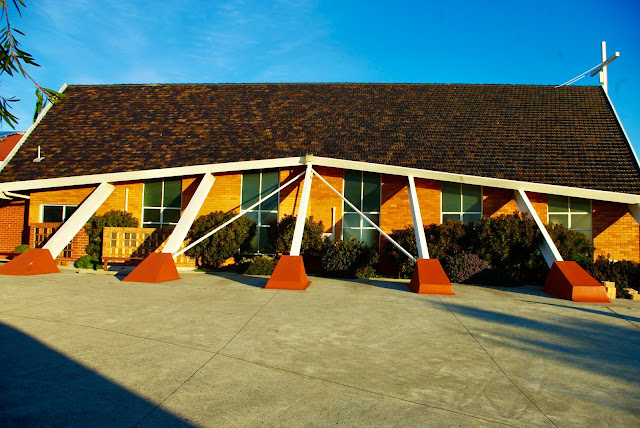 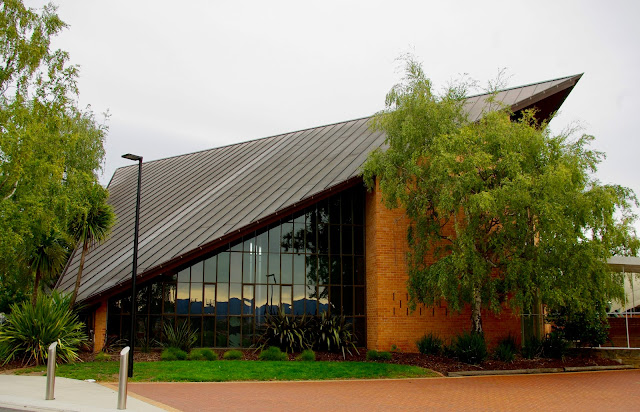